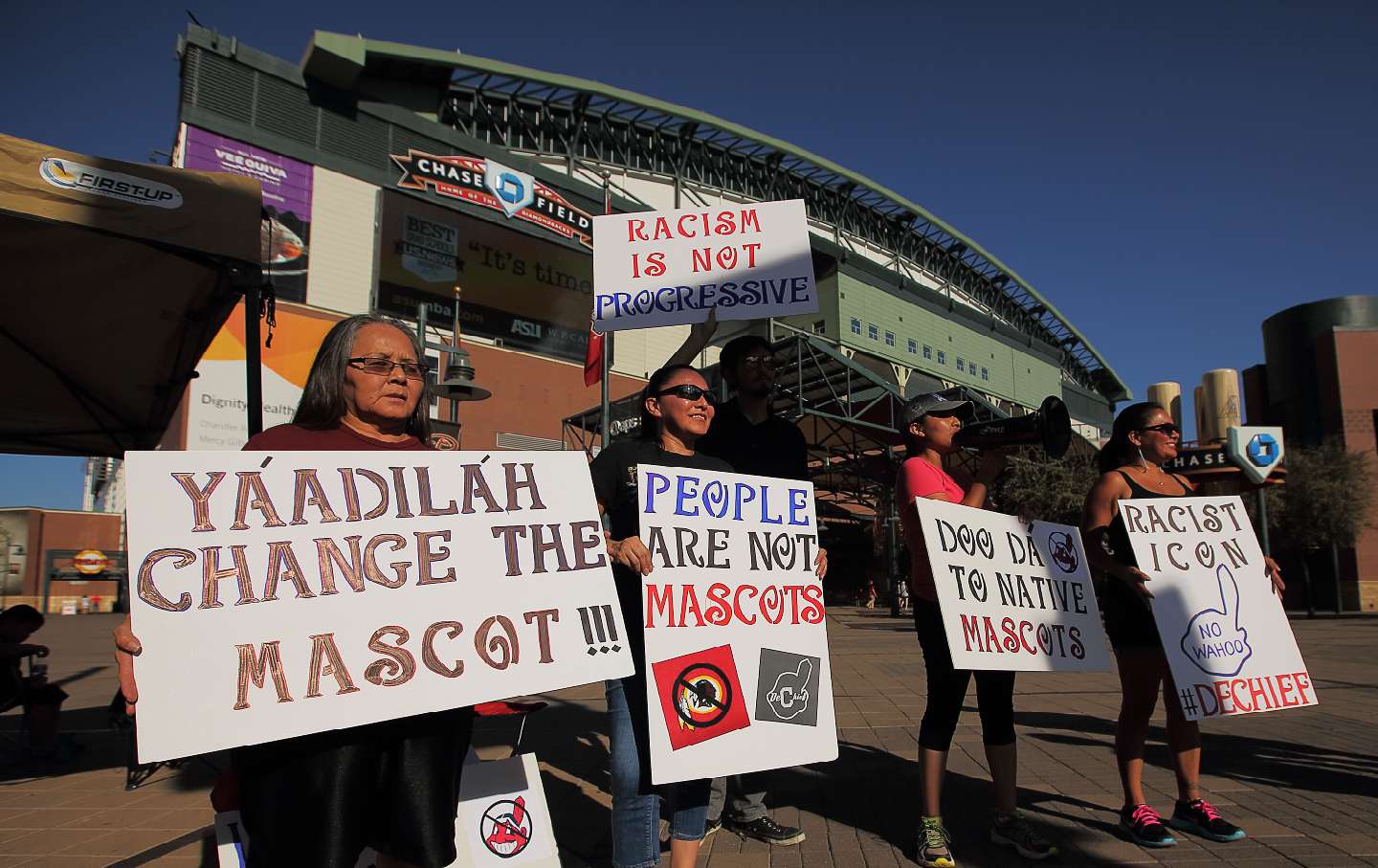 A protest against the Cleveland Indians' Chief Wahoo mascot outside of a regular season game at Chase Field in June of 2014. (Doug James / Icon SMI / Corbis / Icon Sportswire)

A bomb dropped in the sports world Sunday night when it was announced that the Cleveland Indians, after more than a century, would finally be changing their increasingly problematic name. The news, leaked by three people to The New York Times, is that the move would be announced this week. Their plan is to take 2021 to phase the name out, and then to have a new team moniker by 2022.

The team rid itself of the embarrassing minstrelsy of the Chief Wahoo mascot in 2019 but seemed committed to keeping the name “Indians,” with its caps, instead of being adorned with Chief Wahoo’s beet-red face and toothy grin, just bearing the letter “C.” But the team finally assented to the reality that Native American mascotry is the way of the past, not the future.

Let’s be clear about why this—as well as the recent change to the Washington Football Team’s name—is happening in 2020. This past summer saw the largest and most widespread anti-racist demonstrations in the history of the United States. Touching all 50 states, these demonstrations sent an unmistakable message to corporations, the film industry, the art community, and, of course, the world of sports. The message was that there is a young generation in this country that is more diverse and less tolerant of intolerance.

There is, especially in the sports world, a cutthroat competition for Generation Y dollars, as social media, streaming services, and e-sports have emerged as economic competitors to the “legacy sports” of football, basketball, and particularly baseball, which has the oldest fan base of them all. Major League Baseball is now on the hunt for ways to not age out of existence. Already MLB is constantly critiqued for its “unwritten rules” against exuberance, bat flipping, and what the younger generation refers to as “fun.” Racist branding isn’t the way to connect, and its marketeers know it.

In addition, this generation is acutely aware that young Native activists have put the question of mascoting at the heart of struggles for land rights and economic justice. Their argument—backed by the American Psychiatric Association—is that mascoting hurts Native children. They make the case that if a human being can be mascoted by the dominant society, it becomes that much easier to ignore their actual, real-life oppression. When you couple that with pressure from sponsors who don’t want to be associated with 19th century branding, it means that it was only a matter of time before the “Indians” name was going to go the way of the horse and buggy.

I reached out to Jacqueline Keeler, a Dakota/Diné journalist and activist based in Portland, Ore., cocreator of the hashtag NotYourMascot, and author of the new book Standoff: Standing Rock, the Bundy Movement, and the American Story of Sacred Lands. She said, “I never thought this day would come. Folks often ask what’s wrong with calling our team the ‘Indians’? Indeed, it may seem at first glance as less offensive than the grotesque Chief Wahoo. But they don’t reckon with the stereotypes the usage promotes. They were calling themselves ‘the Tribe’ to the exclusion of any knowledge of actual existing Native nations in this country. It is yet another way of denying or sublimating our continued existence. While Wahoo traded in racist caricature, ‘Tribe’ misappropriates the known political reality of our respective nations. Of which, 574 are officially recognized by the federal government and are supposed to enjoy nation-to-nation relations with the United States.

“This denial of our political reality not only disappear us but is a manifestation of the real need to change the unfair relationship between Indigenous people and our colonizers and the ongoing occupation of our lands. Of course, Ohio was where the Shawnee Chief Tecumseh had his last stand at Fallen Timbers and brought the tribes together to fight the westward expansion into their lands. The Shawnee leader was defeated, and now his people, and other Indigenous nations like the Miami and Seneca, were entirely removed from Ohio. It took the Termination Act in the 1950s to change this. Termination was an attempt by Congress to end the existence of tribes politically, and the Relocation Act, which sought to depopulate reservations by relocating Native young people to urban centers. This was how 20,000 young Native people came to be in Cleveland in the 1960s and how they began organizing to get rid of Wahoo and the mascotry.”

Of course, the haters are decrying the move, saying that this is a capitulation to “political correctness.” President Donald Trump, who is a racist, tweeted, “Oh no! What is going on? This is not good news, even for ‘Indians’. Cancel culture at work!” But dead-enders like Trump are increasingly shouting into prevailing winds that are whipping in the other direction. Teams like the Chicago Blackhawks and Kansas City Chiefs are saying that they have no intentions or plans to change their names. Those, as embittered Washington football team franchise owner Daniel Snyder can tell you, could become famous last words.