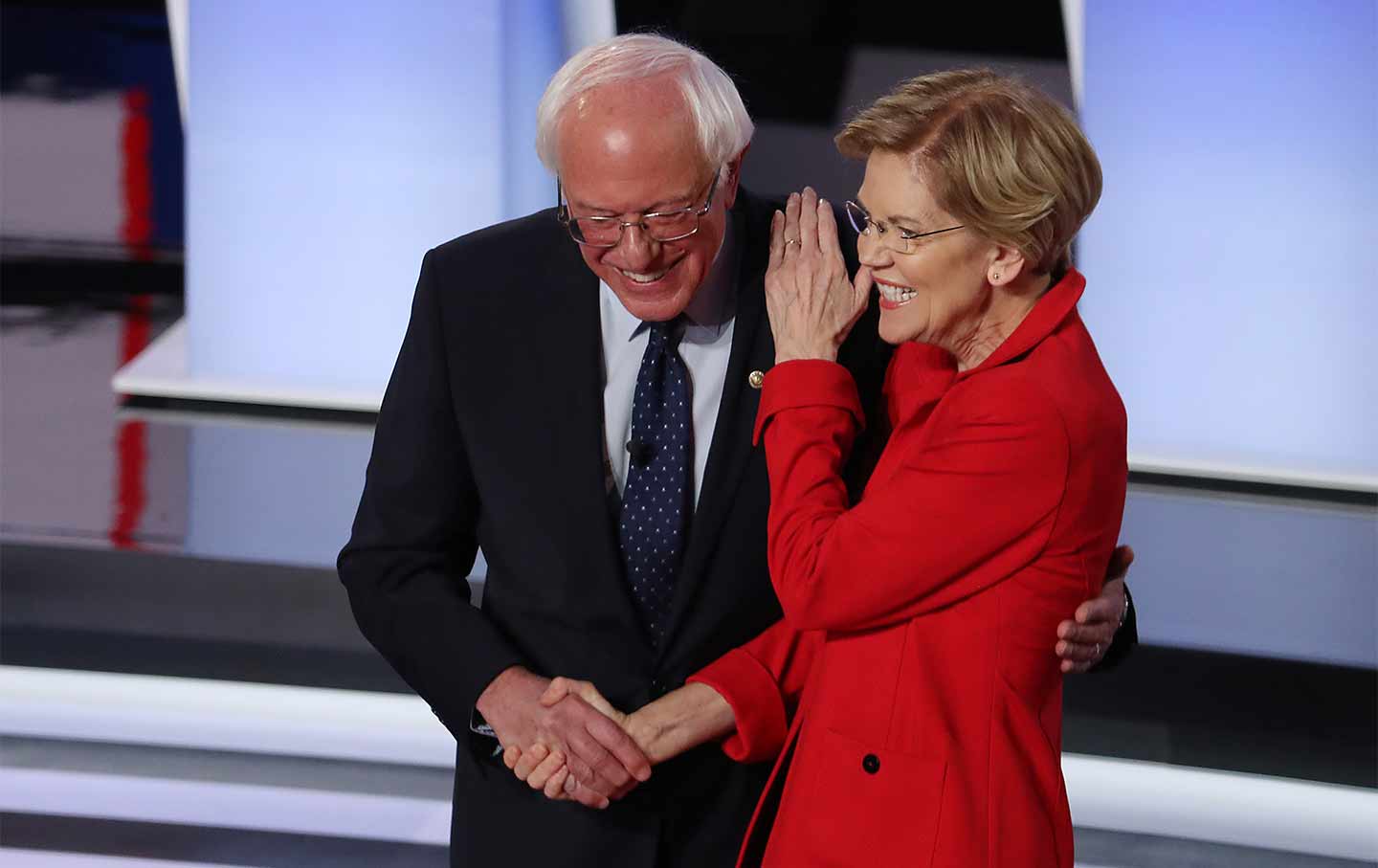 Defeat hasn’t changed Elizabeth Warren. After ending her presidential bid, she’s given interviews that show her to still possess the same thoughtfulness and dignity that made her a singularly attractive presidential candidate. Speaking to reporters on Thursday, she deftly addressed the question of what role sexism might have played in the failure of her campaign. “You know, that is the trap question for women,” Warren said. “If you say, ‘Yeah, there was sexism in this race,’ everyone says, ‘Whiner.’ And if you say, ‘No, there was no sexism,’ about a bazillion women think, ‘What planet do you live on?’”

Warren promised she’d have further comments on the sexism question in the future, but she was also clear-eyed about the fact that there were multiple causes for her defeat. She noted that she had been told there was “a progressive lane that Bernie Sanders is the incumbent for and a moderate lane that Joe Biden is the incumbent for…. I thought that wasn’t right, but evidently I was wrong.”

Warren’s rejection of ideological lanes was a hallmark of her candidacy. She ran as a forceful progressive, but one who, unlike Bernie Sanders, was conciliatory toward her moderate rivals and toward the Democratic party establishment. This attempt to straddle the ideological divide hurt her when it came to issues like Medicare for All, where she first came out in support of the plan Sanders advocated but then, facing criticism from Pete Buttigieg about higher taxes, walked back her position. This earned Warren the distrust of both progressives and centrists.

How to handle moderates and Democratic Party elites has long been a crucial difference between Warren and Sanders. Warren is a party loyalist in a way that Sanders is not. Warren started as a Republican but changed parties. She’s taken to the Democratic Party with the zeal of convert. Like many converts, she sometimes holds her party to a higher standard than those born to the faith. She has taxed Barack Obama and Biden for their insufficient liberalism.

Sanders, who has held office only as an independent, is an outsider trying to take over the church and change it. He’s positioned himself as someone bringing new people into the party and as a warrior against the party establishment.

It’s telling that in 2015, it was Sanders, not Warren, who challenged Hillary Clinton, after the party had clearly coalesced around the former secretary of state. In deciding not to run against Clinton, Warren proved her fidelity to the party, while Sanders gained a loyal following for his insurgent campaign.

It could be argued that neither Sanders nor Warren have successfully figured out how to run as progressive candidates in a party where the established leadership remains steadfastly centrist. Warren’s conciliatory approach and her invocation of unity earned her no friends. But neither has Sanders’s defiance succeeded in cowing the party. One of the lessons of Super Tuesday, where Biden swept through most of the states and gained a small delegate lead, is that Sanders’s aggressive leftism has made him many enemies in the party. Biden is by any measure a weak candidate, but he won on Super Tuesday because he was able to consolidate the entire moderate camp behind him, earning endorsements from former rivals like Buttigieg, Amy Klobuchar, and Beto O’Rourke.

The dispiriting fact is that the moderate wing of the Democratic Party isn’t willing to reconcile itself with either form of progressivism. Neither Warren’s conciliatory approach nor Sanders’s recalcitrance is acceptable. As Nate Silver of FiveThirtyEight notes, “In retrospect, the resistance Warren faced in October/November once she came to be perceived as a frontrunner should have been a bigger warning sign for the resistance Sanders would face once he came to be seen as the frontrunner.”

Perhaps another way to look at it is that Warren and Sanders were both hurt by bad timing; however, a combination of their two approaches could work.

Warren’s emphasis on unity didn’t work because it came too early. She started this conciliatory talk before the first votes were held, when she wasn’t in a position to dictate terms. So unity talk had the effect of watering down her image as a fighter and preventing her campaign from challenging gross misconduct from the party establishment (as in the handling of the bungled Iowa caucus).

Sanders, by contrast, kept an aggressive stance too long. He could have shifted after his victories in New Hampshire and Nevada, becoming more magnanimous in order to convince party elites that he was someone they could work with.

On Twitter, Atlantic senior editor Ronald Brownstein rattled off the ways Sanders retained his pugnaciousness towards the Democratic Party elite and might have offended them:

Partial list of how @SenSanders responded to front runner status post NH & NV. Said he was running against the “Democratic establishment.” Attacked “corporate media” in his speech. Reaffirmed old praise of Castro. Said he wouldn’t accept Bloomberg general election help. Said he’d only pick a VP who supported #medicareforall. Every action signaled he saw himself as the leader of a sectarian faction not a coalition political party & that he saw his movement engaging in a hostile takeover of the party not a merger with it. The response from party leaders and rank and file voters alike was resounding: unprecedented unification by leaders behind Biden last weekend & huge margins for him among self identified Democrats in most ST states, a recurrence of a problem that badly hurt Sanders in 16.

Some of what Sanders did is defensible. It’s certainly proper that he’d want a vice president who supports Medicare for All. Still, Brownstein’s larger point stands: Sanders was unnecessarily aggressive in the moment of his greatest electoral strength, when he should have tried to extend the hand of peace to those he would have to work with.

The ideal strategy, then, is one that combines Sanders and Warren but at different periods. The candidate should have sharp elbows at the start of the race, but be ready to cut deals when they are in a position to dictate terms.

Moreover, it would benefit Sanders electorally to modulate his tone. Super Tuesday proved that Sanders’s existing coalition isn’t large enough. It makes up about one-quarter of the Democratic Party and needs to be supplemented. The white, college-educated voters Warren won could nicely help flesh out Sanders’s coalition. But to win them over, Sanders needs to occasionally adopt the voice of Warren and speak in the language of reconciliation.

Fortunately, despite his disappointing showing on Super Tuesday, Sanders still has time to change. In fact, there’s evidence that he already has. Instead of railing against the Democratic establishment, he’s running ads emphasizing his friendliness with Obama. He continues to be sharp in addressing his rival Biden by drawing contrasts on Social Security and the Iraq War, but is careful to add in nods to party unity. Speaking at a rally on Thursday, Sanders said of Biden, “I know if I win the nomination he’ll be there for me, and if he wins I’ll be there for him.”

This new tone owes much to Warren. If Sanders can continue to speak in his own blunt language but also make Warren-like appeals to unity, he might yet forge a winning coalition.