Terry McAuliffe’s defeat in Virginia shows what happens when you are in a war, and only one side fights. The raging battle over whether America is primarily a white nation or whether it is a multiracial democracy continues to define US politics, and we now have painful proof that Democrats’ approach of ignoring the attacks and trying to change the subject to non-racial topics is woefully inadequate.

Republican Glenn Youngkin’s campaign caught fire when he ratcheted up his attacks on so-called critical race theory (CRT), code for criticisms of any educational curriculum that addresses the country’s long history of racism and oppression of people of color. In complaining that CRT—a law school construct and not actually taught in pre-college courses in Virginia or anywhere else—teaches children to see everything through a lens of race,” Youngkin made the issue into the 2021 equivalent of Trump’s 2016 proposed wall along the Mexican border—a symbolic rallying cry for whites worried about the country’s rapid racial diversification. McAuliffe responded by trying to tie Youngkin to the unpopular Donald Trump, using race-neutral language, without realizing or mentioning that racism and white nationalism both predate and will outlast Trump.

The combination of Youngkin declaring war and McAuliffe pretending there was no war had two fatal electoral effects. First, Youngkin successfully lit the same fuse that ignited such fervent support for Trump across the country, resulting in the highest Republican vote total for any Virginia Republican gubernatorial candidate ever. On the other hand, Democratic voters, especially people of color, were neither informed of the existence of a battle, nor encouraged to engage in it. McAuliffe ran a typical moderate campaign, and people of color voted in typical numbers, with slight increases over their numbers from the last gubernatorial election in 2017. This chart compiled from the exit poll data shows the mathematical difference between summoning your side to the battlefront and pretending there is no battle taking place: 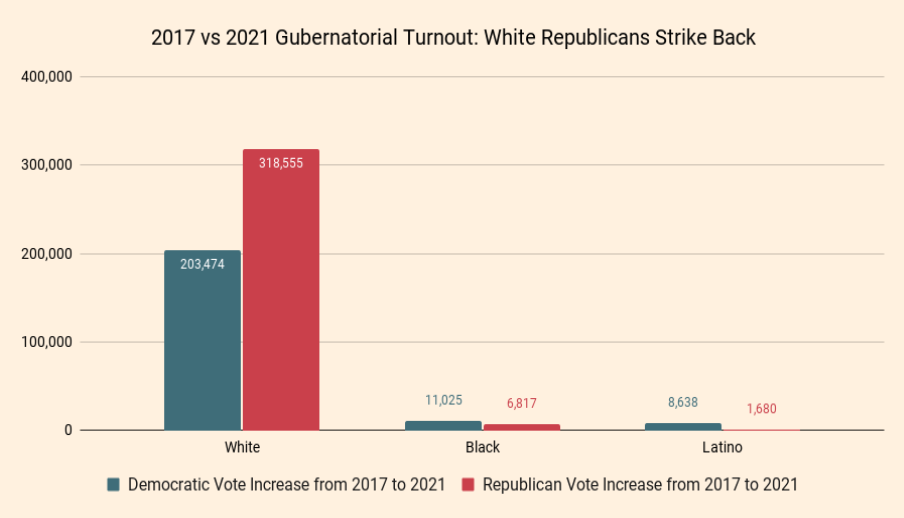 Texas Is Winnable. Beto’s the Candidate to Do It.

It is not surprising that Youngkin’s racial call to arms resonated so strongly in Virginia, the state where racism and white nationalism began after white settlers began buying Black people in 1619 to do the lucrative but backbreaking work of picking tobacco on land previously occupied by Native Americans. Richmond, Va., was the capitol of the Confederacy, and an earlier generation of whites angry about the 1860 election of a president who didn’t think Black people should be bought and sold turned to violence, murdering thousands of fellow Virginians, starting with the Battle of Bull Run in Virginia’s Prince William County. Virginia is the state with the most monuments to the white nationalist leaders of the Confederacy, and the place where, during a 2017 rally to defend those monuments, James Alex Fields gunned his car into the crowd of anti-racist counterprotesters, tossing 32 year-old Heather Heyer onto his hood and flinging her body several feet away, killing her. After which Donald Trump said there were “very fine people” on both sides of the protest about removing white supremacist statues.

For more than 400 years, many white Virginians have shown that they are willing to fight, so the notion that Democrats could succeed by ignoring the battle was always fanciful and a reflection of the lack of cultural competence that continues to plague Democratic leaders and strategists. It turns out that ignoring the racism of your opponent is actually the worst possible strategy. In her 2001 book The Race Card, Princeton political scientist Tali Mendelberg revealed how Republicans’ use of coded racial messages were less effective in swaying voters when the implicit was made explicit, finding that “when campaign discourse is clearly about race—when it is explicitly racial—it has the fewest racial consequences for white opinion.”

The problem is obviously not limited to Virginia. The people who believe that this is and should remain primarily a white nation never stopped fighting after the Civil War and have continued to fiercely resist any tentative steps toward making this nation a multiracial democracy, up to and including attacking the United States Capitol (while carrying Confederate flags) and seeking to overthrow the democratic process itself earlier this year. Since January, the white right wing has engaged in a paroxysm of democracy-destruction in states across the country, passing draconian voter suppression legislation, seeking to undermine any accountability for the January 6 insurrection, and, of course, passing laws banning the modern-day bogeyman of CRT.

For the most part, Democrats have done what McAuliffe did—ignore the attacks and hope to change the subject. Little effort and no political capital has been expended on the critical challenges of immigration reform, protecting democratic participation, and police reform. Prominent progressive strategists and writers such as David Schor and Ezra Klein have devoted copious amounts of attention to advocating for what has come to be called “popularism.” As Klein wrote in a 6000 word New York Times manifesto last month,“Democrats should do a lot of polling to figure out which of their views are popular and which are not popular, and then they should talk about the popular stuff and shut up about the unpopular stuff.”

The Virginia results show the folly of that approach. CRT doesn’t even exist, and McAuliffe sure didn’t campaign on it. But it did the trick of alarming white people about the state’s changing racial composition, and McAuliffe’s silence did nothing to rally progressives to turn out in commensurate fashion.

The Republicans are just getting started, and their continued racial call to arms to fearful white voters will now only escalate after Youngkin’s success. But the good news is that when progressives fight, they win. Barack Obama challenged a nation founded in slavery to put a Black man in the White House, and a multiracial majority responded in record numbers. Donald Trump rooted his presidency in white supremacy and racial resentment. With the stakes clearly defined, again, a multiracial majority turned out in historic numbers to wrest back control of the federal government.

In 2022, the conditions are actually very favorable for Democrats to expand their margins in Congress, especially in the Senate where strong candidates of color are running to oust Republicans in Florida, North Carolina, Wisconsin, and Pennsylvania. There are more than enough people to win those battles, but first we have to recognize that we are in a fight and then summon people to join the battle.