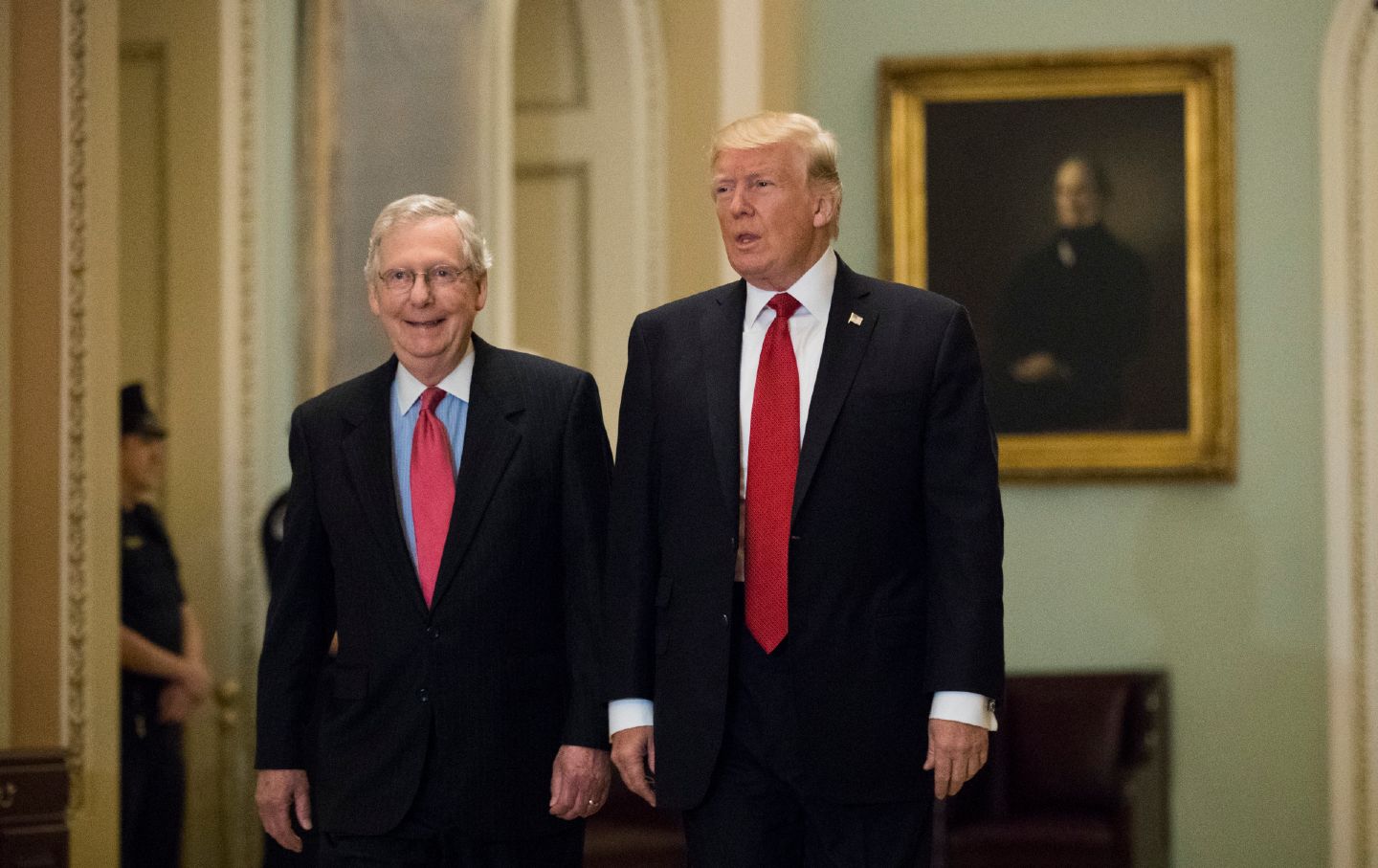 History is likely to remember the days following the Capitol riot of January 6 as the last, best chance the Republican establishment had to break Donald Trump’s hold on their party. In the immediate aftermath of the shocking events, Republican leaders like Mitch McConnell seemed on the verge of breaking with Trump. Fomenting a mob that attacked Congress seemed too much even for lawmakers who had hitherto forgiven Trump’s every transgression. McConnell even described the event as a “failed insurrection.”1

If an impeachment process had been rushed through immediately, it’s possible that some significant body of congressional Republicans would have supported punishing Trump. Instead, impeachment took a week as congressional Democrats called on Vice President Mike Pence to use the 25th Amendment. The extra time was more than enough for Republican lawmakers to have second thoughts as they were inundated by pro-Trump voices from the right-wing media and from their base. As it turned out, only 10 Republicans in the House of Representatives voted to impeach. On Tuesday, only five Republicans in the Senate supported moving the impeachment to a trial. It’s possible, although unlikely, that more than five will vote to find Trump guilty. More probable is that the five who supported the trial will be the only ones to vote to convict.2

Trump’s second impeachment has had the perverse effect of demonstrating that he’s still the top man of the GOP, the figure that can violate the most fundamental principles of democracy and still have the support of the vast majority of the party, including lawmakers. As Philip Bump of The Washington Post notes,3

What the vote Tuesday suggests is that there are only five Republicans who’ve consistently indicated their opposition, first, to Trump’s effort to undermine the results of the 2020 election and, second, to his behavior and rhetoric before the riot. Sens. Susan M. Collins (R-Maine), Lisa Murkowski (R-Alaska), Mitt Romney (R-Utah), Ben Sasse (R-Neb.) and Patrick J. Toomey (R-Pa.) all supported moving forward with the trial, having previously opposed the effort to block the counting of electoral votes from Arizona and Pennsylvania and, more broadly, having rejected the efforts by Sens. Ted Cruz (R-Tex.) and Josh Hawley (R-Mo.) to finagle a lawyerly way to bolster Trump’s effort to overturn the election.4

There are other signs that the GOP remains Trumpist. On Monday night, the Oregon GOP issued a statement condemning the 10 congressional Republicans who voted to impeach Trump. The statement decried these lawmakers as “traitors” and described the January 6 riot as a “false flag operation.” Many other state Republican parties are going down the same path. As Politico noted on Tuesday, the Pennsylvania GOP is now “a bastion of Trump loyalists.”5

On Monday, Sarah Sanders, former press secretary for the Trump White House, announced she was running for governor of Arkansas. “Sanders is a viable candidate only because of her role with Trump,” Washington Post columnist Henry Olsen argued. “That fact shows how important Trump’s backing is for many in today’s GOP. Trump has already endorsed her, touting her support for “borders,” law and order, and the Second Amendment. Even though she is running against two Republicans elected to statewide office, Lt. Gov. Tim Griffin and Attorney General Leslie Rutledge, Sanders is considered the one to beat because of her national prominence.”6

Trump’s continued popularity with the Republican base extends to support for his actions in trying to overturn the election results. Also writing in The Washington Post, Greg Sargent contended that “large majorities of Republicans are very much on board with much of what Trump has done.” Sargent cited a Post/ABC News poll to support his case. The results are striking:7

Given these results, it’s not surprising that that so few Republican lawmakers are willing to break ranks with Trump.8

The anemic GOP support for impeachment comes at the same time that Senate minority leader McConnell has shown he is still fully committed to using all the tools available to obstruct the Biden administration. Emotionally, the GOP remains the party of Trump. Institutionally, it is the party of McConnell.9

A party dominated by Trump and McConnell is not likely to be swayed by Joe Biden’s calls for unity. Democrats might continue the unity rhetoric for political effect and as a way to win moderate voters, but as a viable political strategy it is already dead in the water.10

A path more likely to succeed is to use Trump as anchor to weigh down the Republicans. Instead of calling on Republicans to move past Trump, the Democrats could tar the GOP for its continued Trumpism. With Congress under Democratic control, continued investigations into Trump’s misdeeds are a priority. Trump’s corruption could be kept in public view and Republicans could be forced to defend it.11

Trump will almost certainly remain a power in the GOP, either as a kingmaker or, quite possibly, as the 2024 presidential nominee. Given this possibility, the best move for the Democrats is to hammer away at the fact that the GOP is the party of Trump. Trump remains massively unpopular with the general public and there is no reason not to use that unpopularity as a political weapon.12