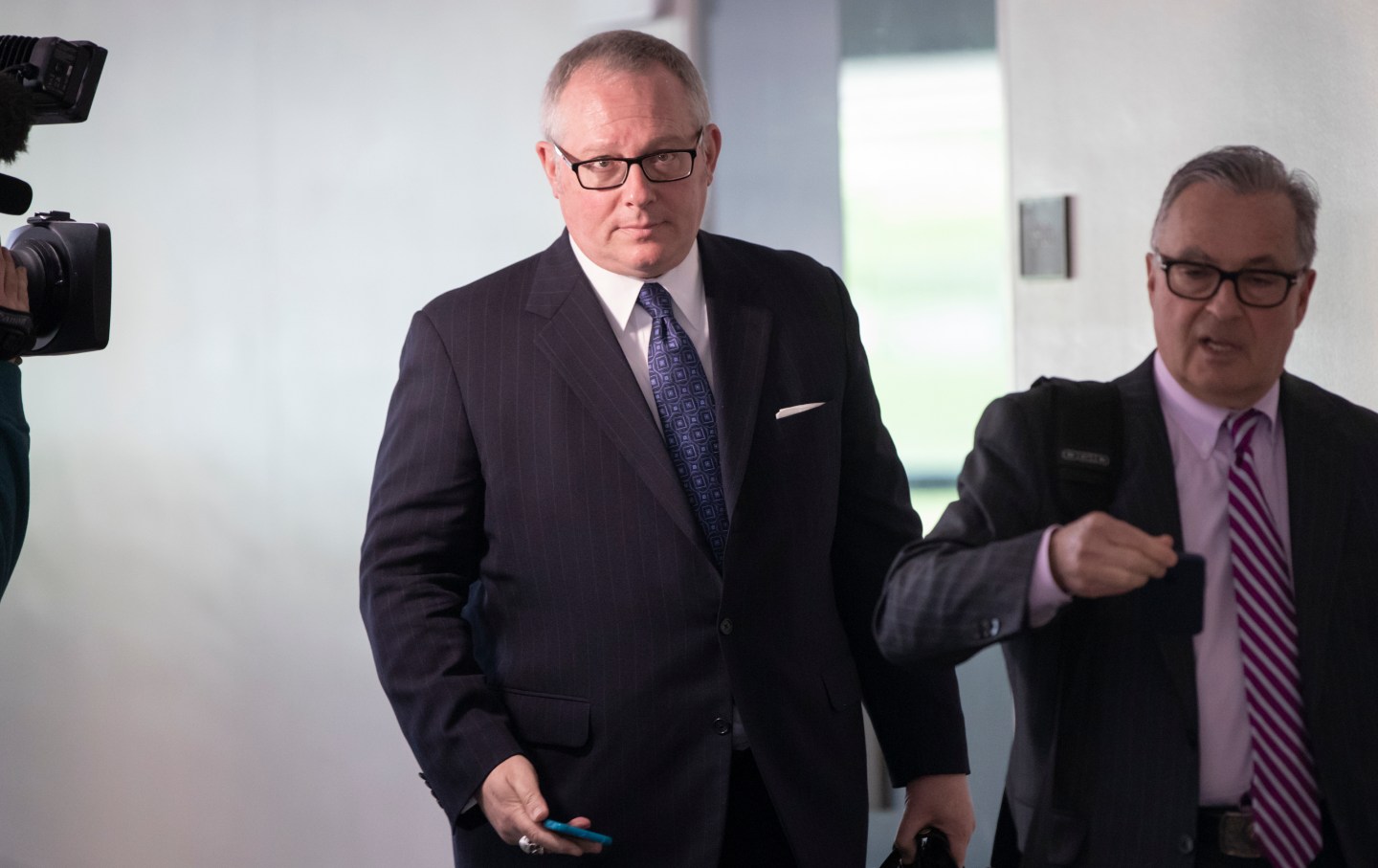 This column is almost always critical of journalists and spotlights the many mistakes, malfeasances, and misunderstandings that characterize so much of our political coverage. But today I just want to offer my condolences. We have had presidential administrations run by criminals before. It would be fair to call certain past presidents con men. (See my new book, Lying in State, for details.) This administration is all that and more, but there’s a new problem: Donald Trump’s White House, the party it represents, and its most prominent supporters in the media are untethered from reality. How do you cover one of the two major parties—the one that controls the Oval Office, the Senate, and increasingly the courts—and the most popular (and most profitable) cable station in America when their arguments consist almost entirely of dangerous lunacy?

A test case arose recently when Michael Caputo, the top spokes­person for the Centers for Disease Control and Prevention, experienced what he eventually said was a breakdown. In a video of a meeting posted on Facebook, ­Caputo—who, the historian Heather Cox Richardson notes on the Public Seminar website, had been “a long-time Republican operative, an associate of Roger Stone who had worked for Russia’s Gazprom Media to improve the image of Vladimir Putin in the U.S.”—accused the Democrats of planning to steal the presidential election. He predicted that when that happened and “when Donald Trump refuses to stand down at the inauguration, the shooting will begin.” He then advised gun-​carrying Trump supporters to immediately buy ammunition. Caputo claimed that “there are hit squads being trained all over this country” and predicted that “they’re going to have to kill me, and unfortunately, I think that’s where this is going.” He knew this because, he told The New York Times, “since joining the administration, my family and I have been continually threatened” by people who have later been prosecuted. “This weighs heavily on us, and we deeply appreciate the friendship and support of President Trump as we address these matters and keep our children safe.”

In a nearly perfect illustration of the Trump administration’s modus operandi, when Caputo made these statements, he was both sabotaging the CDC’s ability to keep Americans safe from the coronavirus and plotting to spend $250 million in taxpayer money to praise his agency for having done the exact opposite. His aide Paul Alexander instructed CDC director Robert Redfield to tamper with previously issued reports that Caputo judged to be “hit pieces on the administration.” Caputo also demanded to review CDC scientific reports in advance. As Politico reported, he supported efforts to rewrite the CDC’s Morbidity and Mortality Weekly Reports on the coronavirus in order to purposely mislead the scientific and public health communities, and his aide pressured Dr. Anthony Fauci, the nation’s top infectious-disease expert, to downplay the virus’s risk to children. Presumably to mask this anti-science, pro-coronavirus agenda, Caputo, who lacks any scientific training, insisted that the CDC’s scientists walk “around like they are monks” and engage in “rotten science.” And in what sounds like an imitation of Napoleon and Squealer, the pigs in George Orwell’s Animal Farm, Caputo pronounced, “Our intention is to make sure that evidence, science-based data, drives policy through this pandemic—not ulterior deep state motives in the bowels of CDC.”

Caputo appeared to have an inkling of how strange he sounded, because after making these suggestions, he said that his “mental health has definitely failed.” And to her and her paper’s credit, The New York Times’ Sharon LaFraniere wrote an unusually context-driven account that demonstrated the degree to which this fish was rotting from its presidential head. She added the important information that Caputo’s comments “were simply an amplified version of remarks that the president himself has made,” given that “both men have singled out government scientists and health officials as disloyal, suggested that the election will not be fairly decided, and insinuated that left-wing groups are secretly plotting to incite violence across the United States.” What’s more, “There were no obvious signs from administration officials on Monday that Mr. Caputo’s job was in danger. On the contrary, Mr. Trump again added his voice to the administration’s science denialism. As the president visited California to show solidarity with the fire-ravaged West, he challenged the established science of climate change, declaring, ‘It will start getting cooler…. Just watch. I don’t think science knows, actually.’” Her article further noted that Trump’s ravings “dovetailed in part with those of Roger J. Stone Jr., a longtime confidant of both Mr. Caputo and Mr. Trump. Mr. Stone, whose 40-month prison sentence for lying to Congress was commuted by the president in July, told the conspiracy website Infowars on Friday [September 11] that Mr. Trump should consider declaring martial law if he lost re-election.”

Two days after LaFraniere’s article appeared, the Department of Health and Human Services announced that Caputo had apologized to the CDC staff and would be taking a 60-day medical leave of absence from his job “to focus on his health and the well-being of his family.” Caputo called his unwillingness to see a doctor previously “a mistake” and attributed his remarks “to my stress level, along with the increasing number of violent threats leveled at me and my family back in Buffalo.” Alexander was said to be on his way out.

This well-reported story should be an example for other journalists. Unfortunately, it is also an exception to the far more common normalization of the crazytown comments that characterize Trump’s Washington: a place where ignorance, arrogance, and deliberate deception come together to destroy our democracy, undermine our freedoms, and now kill our citizens.