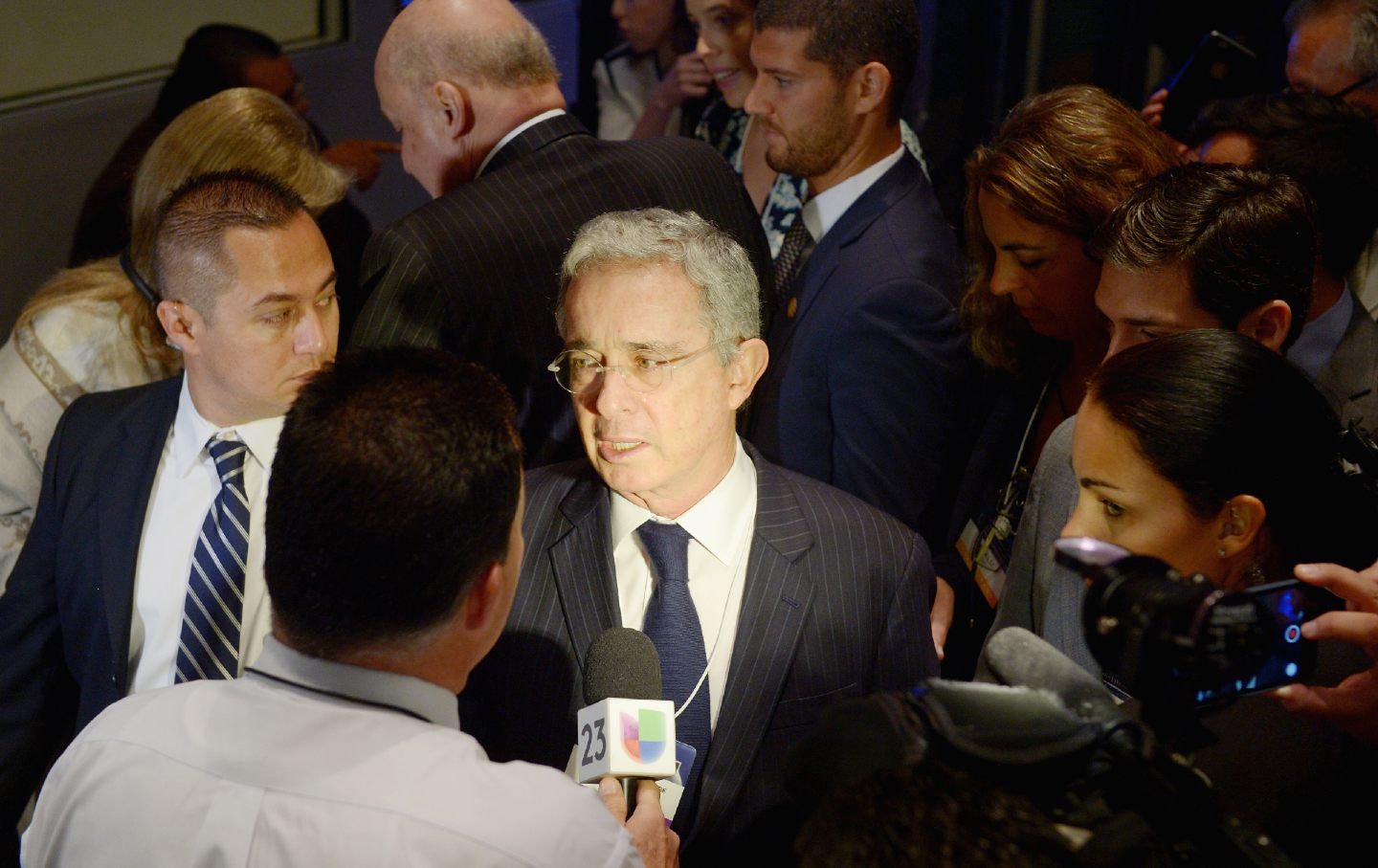 Former Colombian president of Álvaro Uribe Vélez speaks during a 2016 Summit on the Americas in Miami. (Leigh Vogel / Getty Images for Concordia)

Around a week before Donald Trump was elected US president in 2016, Álvaro Uribe Vélez, Colombia’s conservative ex-president, joined Marco Rubio and three Republican members of Congress at a campaign event in Doral, Fla. Hundreds packed into Mondongo’s, a local Colombian restaurant, where Uribe spoke for over three hours, spending most of the time slamming a peace agreement between the Colombian government and a Marxist guerrilla group known as the FARC. Colombian voters had recently voted down the deal in a national referendum after Uribe led a disinformation campaign against it, a result that had propelled him to conservative rock stardom overnight. At Mondongo’s that day, he argued that the agreement would open the doors for the country to become “castrochavista,” a fearmongering term he had popularized invoking Fidel Castro and Hugo Chávez. It threatened to turn the country into a “second Venezuela.”

In the years since his Doral visit, Uribe’s style of red-baiting has slowly permeated Florida’s political scene, where Republicans have increasingly employed it to woo voters from the state’s Cuban, Venezuelan, and Colombian communities. In the months before the 2018 midterm elections, Democratic strategist Evelyn Perez-Vedia, who lives in Westonzuela—a nickname for the city of Weston, home to a large Venezuelan and Colombian population—remembers seeing WhatsApp messages calling Florida gubernatorial candidate Andrew Gillum a socialist. Later that year, both Donald Trump and Ron DeSantis, Gillum’s opponent, warned the state’s 600,000 Cuban-American and 75,000 Venezuelan voters that Gillum would turn Florida into “another Venezuela.” Uribe had used the same talking point earlier that year to attack leftist Colombian presidential candidate Gustavo Petro. It was highly effective: Petro lost the presidential race, and DeSantis was elected governor by less than 40,000 votes.

In recent days, similar smears and misinformation campaigns have intensified to sway voters ahead of the November presidential election, but what is remarkable now is that they are being propelled and amplified by Colombian politicians. Led by Álvaro Uribe and members of his right-wing political party, the Centro Democrático, serving Colombian officials have shared pro-Trump posts and videos. Some have even gone so far as to endorse Donald Trump ahead of the election, as Senator María Fernanda Cabal did recently over Facebook Live. Representative Juan David Vélez, who represents Colombians abroad and is a dual US-Colombian citizen living in Miami, has even weighed in on local races, endorsing Republican congressional candidate Maria Elvira Salazar and hosting a virtual event in which Uribe told Salazar he “would like to see you in the United States Congress.” Vélez told me he planned to vote for Trump on Election Day.

Earlier this month, Trump himself tweeted that Biden was a “PUPPET of CASTRO-CHAVISTAS like Crazy Bernie, AOC and Castro-lover Karen Bass.” The Trump campaign’s official Latino social media accounts, Equipo Trump and Latinos for Trump, have frequently invoked castrochavismo to attack Biden, while also spreading and amplifying misinformation. They have claimed that Latin American socialists are promoting Biden, have suggested coordination between Democrats and socialists in Latin America, and have argued that Democrats are ignoring attacks on Latino men.

It’s unclear whether this barrage of support has been developed by Republicans this election cycle in coordination with Colombian government officials. Earlier this month, WLRN, a radio station in Miami, reported that Juan Manuel Santos, the Colombian president who brokered the peace deal Uribe vehemently opposed, learned that a high-level official in the current administration of Uribe’s handpicked successor, President Ivan Duque, had reached out to help Trump’s campaign. However, there is no public evidence linking anyone in the Colombian administration with the Trump campaign.

There is no reliable polling available on how Colombian Americans may vote, but there is evidence that the community is heavily conservative. During Colombia’s 2018 presidential elections, US-based Colombians voted overwhelmingly—by over 70 percent—for Duque. The election, writes WOLA’s Adam Isacson, “will be a major test of whether [Uribe’s] cold-war throwback strategy…can be exported to other contexts.”

Latinx voters from Cuba, Venezuela, and Nicaragua—many of whom fled authoritarian leftist governments—are also susceptible to red-baiting and misinformation campaigns over WhatsApp and YouTube. Any association with socialism could scare off potential voters. “The lessons that Uribismo learned from the referendum in Colombia have been translated to Republicans, who have had no problem applying them in South Florida,” says Juan Pablo Salas, a Colombian American political analyst in Sarasota. “There’s an intrinsic relation between Uribe, the Venezuelan right, Nicaraguan conservatives, and the right in Miami.”

Political analysts and pollsters have frequently warned of the potential for conservative Latinx voters to help Trump carry Florida, but it’s unclear how decisive the bloc will be. Colombian Americans alone make up 190,000 eligible voters in Florida, where Hillary Clinton lost by 110,000 votes in 2016. Recent polls suggest that Biden is up by over two points in the state, even as his campaign has been losing ground with Latinx voters nationally—polling somewhere between 52 and 58 percent. (Clinton won 62 percent of the Hispanic vote four years ago.) If Biden’s margins tighten in Florida, that dip in Latinx support could hand the state to Trump, or embolden him to cast doubt over the election results even if he loses.

While Trump’s campaign may be peeling off some support by disinformation and red-baiting, underlying its attempts to court Latinx is a basic understanding of the policies and rhetoric that motivate certain voters. The Trump administration’s foreign policy moves in Latin America—reversing Obama’s rapprochement with Cuba, imposing sanctions against both Cuba and Venezuela, backing Juan Guaidó as Venezuela’s de facto leader, and floating the possibility of a military coup against Nicolás Maduro—have cemented support among conservatives.

Domestically, Biden has leaned into immigration to court Latinxs. His promises to restore DACA and to undo the cruel legacy of Trump’s family separation policy have been well-received, but his ties to similarly brutal deportation policies under the Obama administration have cost him some support. On the issue of foreign policy, Obama-era diplomacy in Latin America involved tacit support for coups in Honduras and Brazil, and militarizing both Central American police and Mexico’s southern border. While Trump has embraced support from right-wing leaders abroad, Biden has rejected connections to leftists. Earlier this month, Biden wrote an op-ed in Colombia’s largest daily newspaper, El Tiempo, reiterating his support for the peace process while distancing himself from prominent leftists, such as Gustavo Petro.

Biden’s moderate foreign policy positions are part of the reason Colombia’s conservative politicians are backing Trump. The US election can indirectly affect the standing of the Centro Democrático in their home country. Other world leaders seem to have come to similar conclusions: Trump has recently received endorsements from politicians who benefited from waves of right-wing populism similar to the one that brought him to power, such as Rodrigo Duterte and Jair Bolsonaro. If he wins, Trump’s reelection could be taken as a sign that right-wing politics will have a continued home in the Americas, says Salas, the political analyst. A Biden victory would signal the opposite. “This will have hemispheric consequences.”