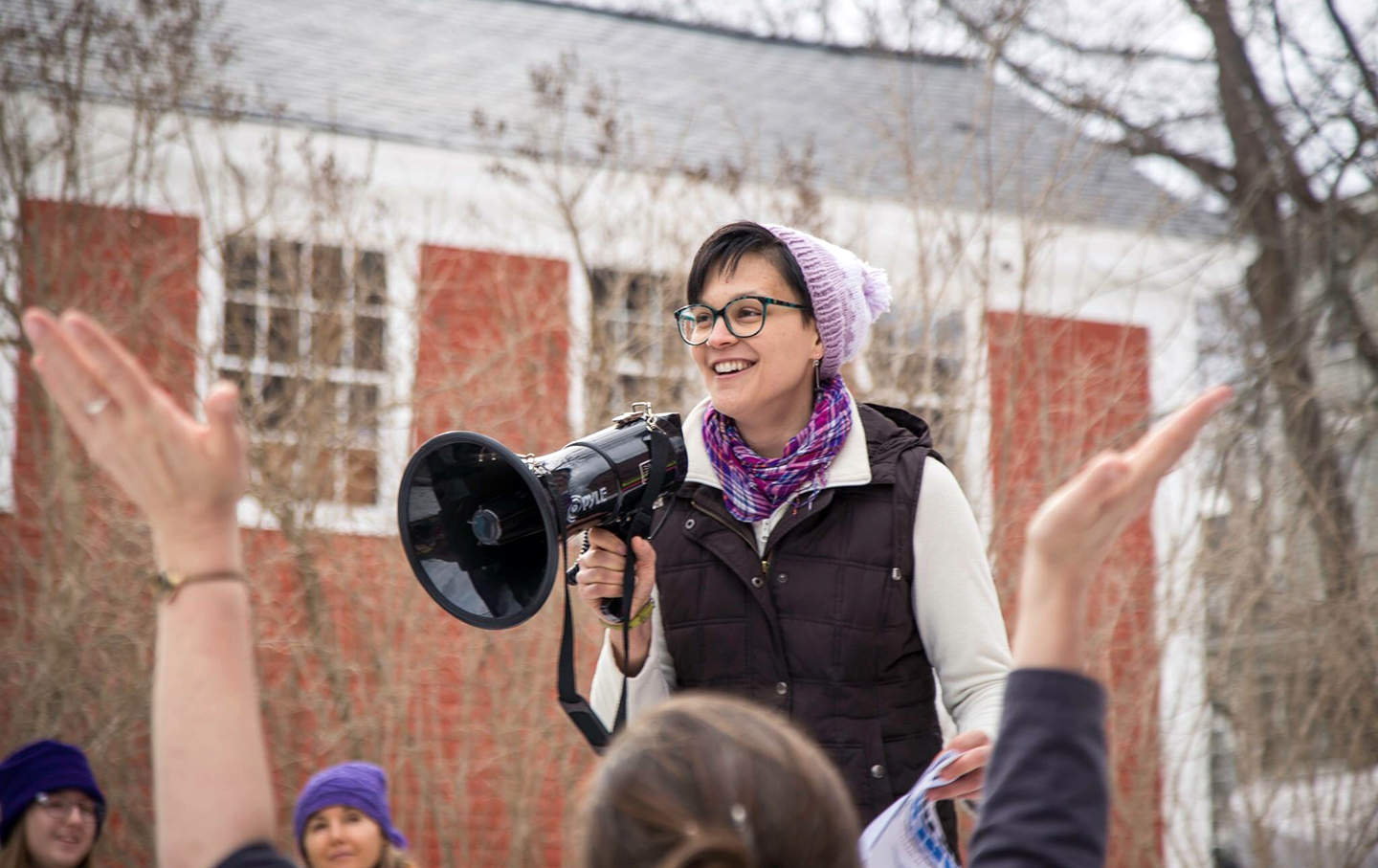 The night before my interview with the mayor of Belfast, Maine, I had dinner with some family friends: a middle-aged lesbian couple who live about 60 miles away in the tourist hub of Bar Harbor. I told them that in 2017 the town had elected a 26-year-old queer woman named Samantha Paradis, and they nodded knowingly.

“Oh, Belfast,” one of them sighed. It had always been progressive, she explained, and then she told me about a famous lesbian commune there in the 1970s. “You know, every few months one of them would go down to New York or Provincetown and come back with a new woman, and that’s how the community grew.”

It seemed apocryphal, but when I repeated it to Paradis the next morning, she was unsurprised.

“Oh yeah,” she said. “A lot of women are still here. They have a game night once a month.”

Later, she mentioned that there was a lesbian-owned bakery in town, Moonbat (the name, she explained, was an old moniker for Belfast, in honor of its historically left—i.e., batty—politics).

“There’s a queer bakery…and we didn’t meet there?” I asked. Paradis and I are both queer, and I had expressed hope in my e-mails to her that we might meet at a queer-owned business for our interview.

“Well, we’d less be able to have a private conversation. There are like three tables.”

Instead of Moonbat, we were at Bell the Cat: a bright if generic-looking café with abundant seating, decent coffee, and full breakfast and lunch menus. (The business is also black-owned, notable in 98 percent white Belfast.) Paradis and I were tucked into a booth, where she worked on a gargantuan mug of herbal tea (she drinks neither caffeine nor alcohol), while I consumed a similarly giant cup of black coffee.

When I’d first walked into the coffee shop, I’d found Paradis deep in conversation with three middle-aged women: her colleagues on the night shift at Waldo County General Hospital, where she works as a staff nurse. Her annual salary as mayor is only $2,500—not nearly enough to live on. Now, sitting down, we found ourselves visited by a steady stream of café-goers, mostly elderly, who wanted to wish the mayor a good morning. With a median age of 44, Maine is among the oldest states in the nation, and at Bell the Cat, it seemed like it.

The entire scene was charming—so charming, in fact, that I might’ve wondered if Paradis had orchestrated the whole thing. But Paradis, who grew up speaking French in an 1,000-person town in northern Maine, does not come across as a slick political figure. She is earnestly self-assured, warm, and direct. Those qualities, plus the fact that she knocked on 2,500 doors during her 2017 mayoral campaign, make it easy to understand how a then–26-year-old with no political experience unseated a four-term incumbent almost three times her age. (As we talked, I did the math in my head; given Belfast’s population of 6,700, Paradis may well have visited the majority of homes in the town.)

Mariah Parker Invites You to Be Your Complete, Weird, Messy Self

Paradis has been busy since she was sworn into office in late 2017. Climate change is her priority, and she chairs the city’s climate-change committee, where they’re studying the effects of sea-level rise on Belfast, which sits at the mouth of the Passagassawakeag River estuary. In January, the city turned on its third solar array. With that addition, Belfast is now generating almost 90 percent of its municipal energy through solar. They’ve also banned plastic bags and polystyrene foam (commonly known by its brand name, Styrofoam), and installed a free electric-vehicle charger downtown, with more on the way.

Paradis is also working on addressing the city’s affordable-housing crisis. “The average income is around $40,000,” she said. “The average cost of a home is around $230,000. So 70 percent of our residents can’t afford to buy homes. And the rental market is really tight, so to find a place to live is really challenging.”

That’s a problem—both for long-time residents who are fighting to stay in their homes and for the young people whom Maine is struggling to retain.

“We’ve had a lot of positive movement in changing our zoning to allow for higher-density development and accessory dwellings,” she said. “There’s a lot more work to do, and that’s something I’d want to focus on in a second term.”

And that second term seems like it should be a no-brainer, given the setup: A small town with a history of leftist politics and a charismatic, young mayor in the middle of enacting an ambitious set of progressive policy goals. But not all is warm and fuzzy in Belfast. When I asked Paradis about the rumored rift between her and the city council, she seemed to expect the question. “It’s ongoing,” she told me.

The conflict began, according to Paradis, with a June 2018 public hearing about a salmon farm coming to Belfast. Some residents had concerns about the $500 million project. At the hearing, one man read a Wendell Berry poem that references the killing of children in exchange for development, and the conversation became heated. At one point, Paradis said, a councilmember became “verbally aggressive” toward a constituent, calling her out by name and accusing her of bringing a mob to a meeting.

Paradis, as the new mayor, found the dynamic unacceptable.

She asked the council to participate in a facilitated workshop on how to welcome constituents to their meetings, and the group came up with some guidelines.

“I was optimistic,” Paradis said. “But it went downhill from there.”

In November 2018, a speech at a Belfast Chamber of Commerce dinner included a roast of Paradis, with jokes made about the bathroom breaks and other changes she had instituted in City Council meetings. The following week, she penned an op-ed in the local press, describing the ways in which she had felt disrespected both in the speech and by the City Council at large. The council was horrified at being called out and assembled an “emergency meeting” to address the op-ed. At that meeting, they voted to bar Paradis from speaking on behalf of the council and to remove her from the Mayor’s Coalition on Jobs and Economic Development. They reportedly patched things up a week later at a meeting in which the council rescinded its previous votes. But when I asked Paradis about the reconciliation, she chose her words carefully.

“Well,” she said, speaking slowly, “what they did was a violation of the Maine Human Rights Act. They clearly retaliated [against] me sharing an experience of discrimination with our employers—the voters. So when they became aware of that, they rolled back their decisions.”

“Did you make them aware of that?” I asked.

“Yeah, I worked with legal counsel to make them aware of that.”

Paradis told me that recently the council voted again to restrict Paradis to only speaking at the end of every agenda item. And one councilmember is still apparently the owner of a Facebook group in which participants have suggested replacing Paradis with a goat.

It was hard to square such animosity toward Paradis with my image of Belfast as a cozy hippie town.

Paradis explained to me, “There’s this general desire across the board to have young people engaged and staying in Maine.… People are coming back, like myself, and settling into rural places and wanting to get engaged, and there’s a tension with the folks who have held the court.”

This isn’t just an issue in Belfast or Maine. Across the US, at every level of government, young progressive politicians are taking office. But when young leaders institute new practices—like asking their fellow elected officials to examine their privilege, as Paradis did—the older, more established order may not feel entirely comfortable.

Paradis is up for reelection in November—as are two City Council members, including the one who hosts the Facebook group. When I asked whether part of her strategy might be to replace the councilmembers with new, more supportive faces, she was clear that she had to focus on her own campaign, as well as finishing her nurse-practitioner degree.

But, she said, she would welcome other people running.

“At this point,” she said, “I want what’s best for the city.… I hope that the voters can see what’s happening.”

A few days later, I checked out the Facebook group “You Know You Love Belfast If…..,” administered by a Belfast city councilor. Sure enough, a March 7 post with the text “Can we? Can we? Can we?” linked to an article about a town that had elected a goat as its honorary mayor. The post had many enthusiastic affirmations in the comments (one person wrote simply: “Upgrade”). The vitriol on the page was jarring, and I couldn’t help but be reminded of the ire that Alexandria Ocasio-Cortez, another young leftist woman who unseated an older male incumbent, has inspired. But both women’s detractors may be making some miscalculations. Neither AOC nor Paradis has shown themselves to be easily deterred.