The sign appeared outside the only liquor store in town shortly before the November election. Despite a complaint by local Democrats to the town supervisor, it’s still there.

It’s not altogether clear who is supposed to do the fighting—the “Sons of Liberty” (a name used by a number of right-wing militia groups) or the Democrats. Nor is it clear against whom the fighting is to be directed. Whatever the case, the tone is hostile. But the town supervisor—a Republican, like the rest of the town board—said the best he could do would be to have a word with the owner.

At first, I was ready to believe that the sign was an indication of just how nasty the political climate has become. I could already see it as a jumping-off point for a discussion of local right-wing views and the way they mirror the national rants of Internet postings and talk show hosts.

All Politics Is Local

Trump’s Response to Losing the Vote

But recently I mentioned the sign to someone who grew up here who told me that the liquor store owner is generally seen by his fellow Republicans as something of an embarrassment. He doesn’t, in fact, represent anyone but himself. The conversation made me realize I need to avoid the same kind of knee-jerk reactions as those that often pass for national political discourse these days.

I went back to look at the sign again and this time I saw something different: a statement, even if poorly expressed, of values that many Americans believe in and feel are under attack. As Senator Sherrod Brown of Ohio said in his recent book Desk 88, many rural voters don’t think either party is going to do anything for them, but they vote Republican because “they think Democrats will do something to them”—beginning with taking their guns away. Seen in this light, the sign is a reminder of a very real “values gap” between many urban and rural voters.

Let’s start with God. A few days ago, as I drove the back way over Mount Nebo after a snowstorm, I saw five deer standing on the crest of the ridge, backed by a deep blue sky and several distant peaks. I stopped the car for a minute to stare at the deer (who stared right back at me), then resumed my journey. Suddenly I found myself humming the old Swedish hymn “How Great Thou Art,” which I had last heard a couple of years ago at the funeral of Ralph Hull, a 98-year-old local farmer whom I’d come to know. I think the hymn came to me because of its opening words: “O Lord my God, when I in awesome wonder / Consider all the worlds thy hands have made.” 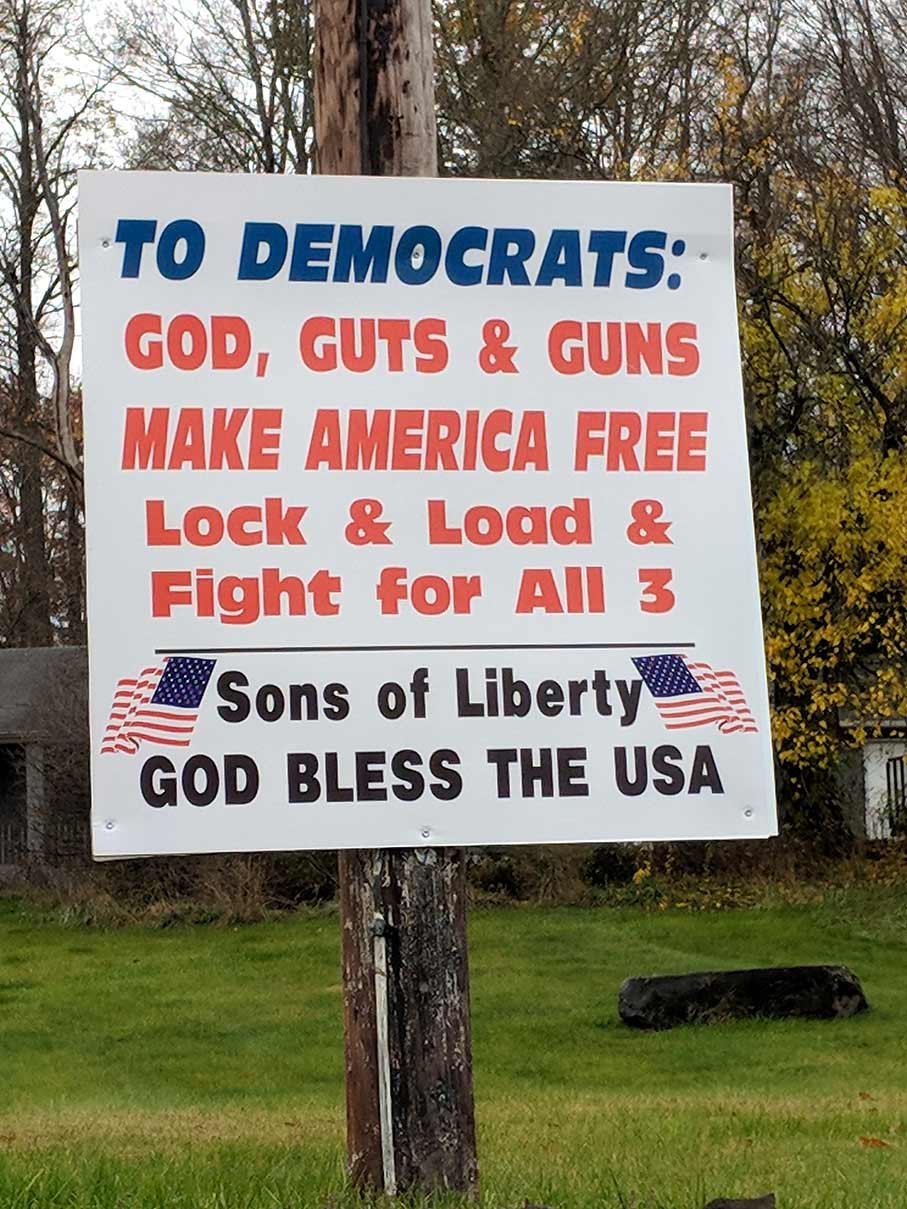 It’s no surprise to me that so many people in rural communities, and perhaps especially farmers, are religious. Seeing so many scenes of natural beauty every day, who could not feel a need to try to understand how all of this came to be? Even a friend who jokingly talks about his lifelong travails as a lonely Democrat in an overwhelmingly Republican town is as faithful a member of his church as he is of the local Democratic committee.

Regarding “guts,” I assume the sign’s reference is to patriotism and support for the military, which I’ve talked about in these reports before. I’ve also talked about guns, but only in passing, so I’d like to say a little more. I’m all for more restrictions on who can own a gun, and regard myself as a pacifist. But guns in rural areas are important for hunting and as a means of protection—something I sometimes think about when I hear the coyotes howling on a cold winter night.

I was taught as a kid to shoot targets with a BB gun by my grandparents’ Adirondacks neighbor. Here in the northern Catskills, boys (and occasionally girls) still grow up being taught to shoot—often starting much the same way I did. As late teenagers, in the company of their fathers and uncles, they go out hunting and, if they’re lucky, show up in a photo in the local newspaper next to a deer with prize-winning antlers.

This centrality of guns was brought home to me recently when I was chatting after a meeting with the town supervisor, who seems in some ways an unlikely Republican—in particular, because, as he’s the first to say, he didn’t have an easy time growing up part-black in a practically all-white community. Why, I asked him, wasn’t he a Democrat?

“Guns,” he barked. “I like my guns. I don’t want anyone taking away my guns.”

But he knows, as I do, that gun-owning doesn’t always match up neatly with a political party. Another of my friends here is a Democrat who has lived most of his life in the area. He calls the .22 caliber rifle the “staple of every rural household in America.” He uses his mainly for scaring off or killing garden pests like woodchucks. He also has a shotgun for protection against human intruders (“Just hearing one being cocked will make them think twice”) and a more powerful rifle suitable for hunting big game like deer or bear.

My friend says he doesn’t know anyone who owns an assault weapon, but that nobody he knows wants controls on them because “that would give government a foot in the door.” Eventually, the thinking goes, any kind of controls would lead to restrictions on hunting and personal protection weapons, too.

So, what does this all add up to? First, a plea not to drive through my town—or any small town—and assume that everybody who lives here is a caricature. And second, a plea for progressive urban Democrats to do a better job of making common cause with their rural cousins. Washington Post columnist E.J. Dionne recently noted that Senator Brown won reelection in 2018 as a Democrat in a state Trump had carried handily, but that, as Brown himself pointed out in his book, he did it while losing most smaller towns and rural communities. As Brown wrote, “We as progressives have work to do.”

I still find that sign outside the liquor store unpleasant. But it no longer seems menacing, just dumb.