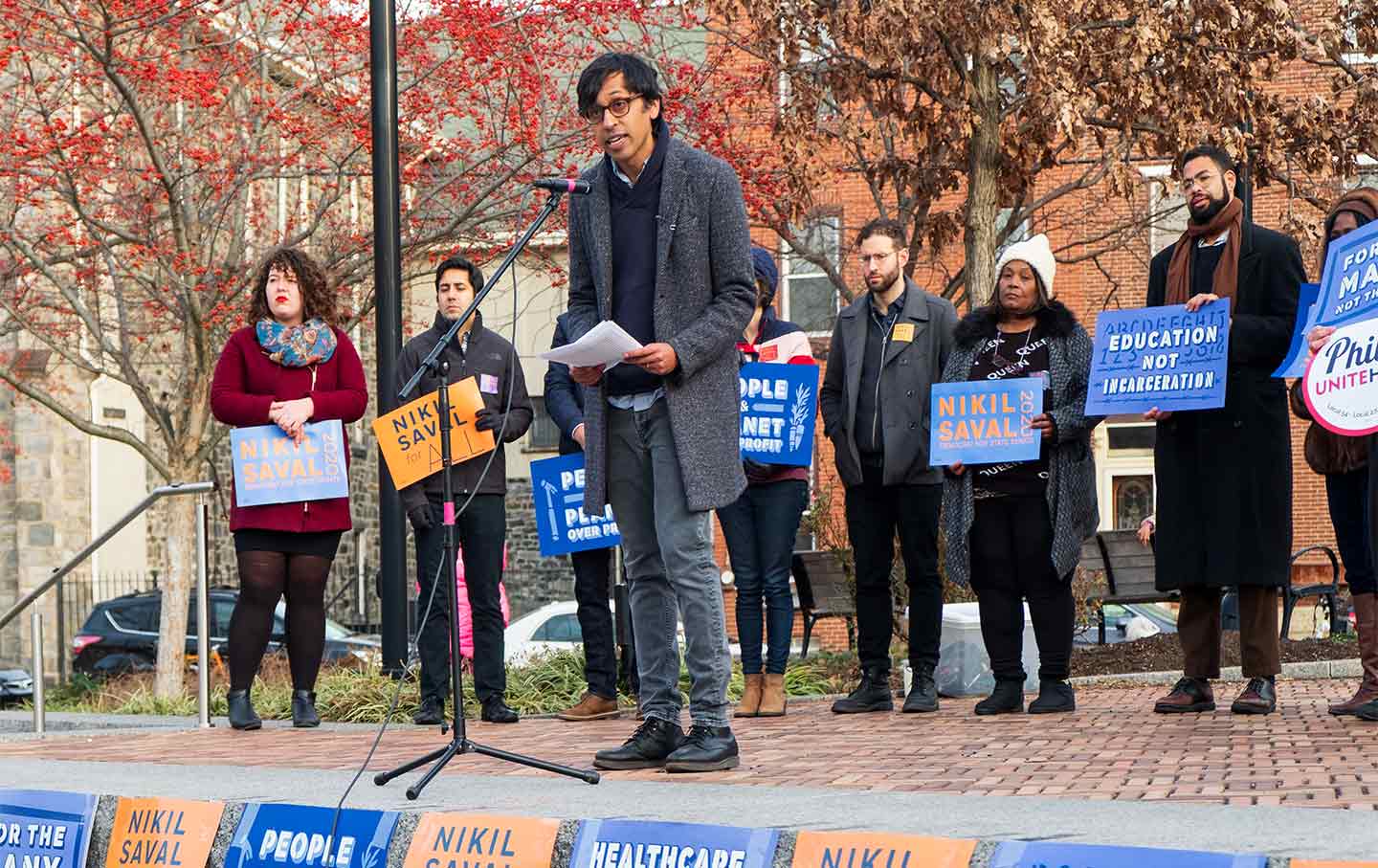 Nikil Saval speaks at an event in Philadelphia. (Photo courtesy of Jason Lozada)

Before Nikil Saval had taken the first sip of his IPA, he’d discussed the Mexican drug war, the coup d’état in Bolivia, journalism in Central America, and modernist music. Sitting with me at the 68 Jay Street Bar in Brooklyn, he spoke in a measured tone and had a wealth of knowledge about what seemed like passing every topic.

It’s not surprising, then, that Saval has a motley background. He’s been an organizer with the union UNITE HERE, a Bernie 2016 campaigner, the author of a book on the history of the office cubicle, an editor of the literary magazine n+1, a dues-paying member of Democratic Socialists of America, and a Philadelphia ward boss. Now, the bespectacled 36-year-old is taking his next career step: running for the Pennsylvania State Senate.

Saval is part of a new generation of progressives launching their political campaigns in opposition to two forces: President Donald Trump and the status quo Democrats who have failed to confront pervasive racism, misogyny, inequality, or the climate crises. And not all of these young activists are racing toward the national stage. On the local or state level, we’ve seen Tiffany Cabán nearly get elected district attorney of Queens; Randall Woodfin become mayor of Birmingham, Alabama; and Kendra Brooks of the Working Families Party win a seat on the Philadelphia City Council. These are the kinds of leaders who understand the importance of district attorney races, nerd out on housing reform, and realize that eschewing big donors is not merely a matter of principle but a way to forge and solidify community ties.

As Saval and I sat in the bar in DUMBO, one of the hyper-gentrified sections of Brooklyn where luxury condos, start-ups, and swanky eateries occupy erstwhile dock storehouses, I couldn’t help thinking of the history Saval dredges up in his first book, Cubed, a parsing of the evolution of white-collar work and office space. The 2014 book is not partisan, but it gives clues as to where Saval’s capacious political views were hatched. Underpaid and walled off from coworkers, Saval sought not just an escape but also a way to organize and improve conditions.

Saval has since left the cubicles behind him, and is now setting aside editing work to campaign full time until the primary in April. 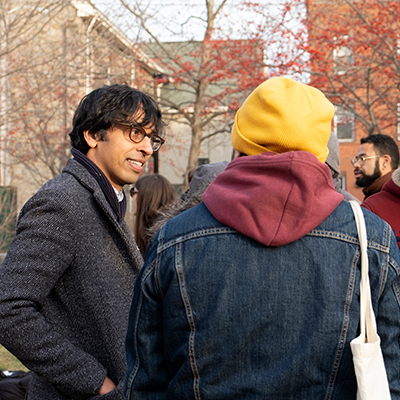 Nikil Saval speaks at an event in Philadelphia. (Photo courtesy of Jason Lozada)

Saval has a 1-year-old son; I’m going to be a first-time dad in about a month, so it seemed natural that we discuss universal family care, which is one of the three prongs of his platform as he looks to unseat 10-year incumbent Larry Farnese.

Saval told me he hopes to subsidize family care “from cradle to grave” and support domestic workers by paying them a living wage and guaranteeing their right to unionize. When I pressed him about how his plan would help a freelancer—say, a journalist with a kid on the way—he noted that he supports establishing a social insurance fund, which would apply for independent contractors. He also backs the contentious California Bill, AB-5, which would either prompt media outlets to officially hire freelance journalists whose work they increasingly rely on (ahem) or avoid paying out by giving them less work (ack!).

“Completely over the moon” about his own child, and the parenting experience in general, he said he was able to take three months off from work to be with his new kid. Saval now wants to make sure everyone can take the necessary time to raise their children. “Years and years of feminist organizing” have underscored that paid parental leave “should be the norm,” Saval said.

The other two prongs of Saval’s platform are a Homes Guarantee—which would stabilize rents statewide and build municipally owned, multifamily public housing—and a Green New Deal for Pennsylvania. Pennsylvania is responsible for 1 percent of global greenhouse emissions, which is why Saval wants to push the state toward 100 percent renewable energy by 2030. That ambitious goal would be achieved, in part, by electrifying bus fleets, making public transportation free, and getting natural gas out of all buildings.

Saval explained that we need the “general Democratic caucus to take [the climate crisis] with the gravity it deserves, but also to realize it is part and parcel of broader neglect of public infrastructure and public goods.”

For Saval, a just and functioning economy “is one that tackles these problems and subsidizes family care, tries to build affordable housing, boost public transportation, raises the wages of local workers, and allows them to unionize.”

After we ordered our second pints, I asked him about his own history—both political and personal.

‘I Am Creating Objects That Only I Can Create’

Born to two parents from India, Saval grew up in West Los Angeles, and confessed that as a kid, he was a “weak liberal.” He came to New York to attend Columbia University—and it was the city that got him hooked on politics. After landing his first post-college job in book publishing, he said, he realized that “the industry is subject to the same venal aspects as any other, and yet covered over with a veneer of prestige.” That didn’t sit well with him. Nor did the extremely low pay. As he and his entry-level colleagues dreamed of unionizing, they realized they didn’t know how.

Saval’s next step toward politicization was housing. He was living on Atlantic Avenue in downtown Brooklyn when, in 2005, the mega-development project of Atlantic Yards was announced—which, to Saval, basically meant the bulldozing of poor and marginalized communities. He said the combination of his poorly paid office work and the coming destruction of his neighborhood finally broke both his “naive faith in literature and how it was produced” and his “naive faith in how cities work.” He moved to California for grad school in English and soon started volunteering with Unite Here.

While he was finishing up his dissertation—first focused on modernism in music, and eventually morphing into what would become Cubed—his wife started school in Philly. After they settled in, he told me, he now “couldn’t imagine living in another city.”

As he’s grown to love the town, he’s also realized that “Philadelphia is not sustainable for some people.” He gave me an example of developers and hoteliers receiving state grants to build luxury condos and hotels while the public schools continue suffering from asbestos and lead poisoning. “The schools are toxic and teachers are deeply underpaid,” he said. Currently, the minimum wage in Pennsylvania is $7.25, which Saval called “grotesque.” There’s legislation to raise it to $9.25 an hour, but that’s still far below a living wage.

I asked him about his own political motivations. Like any good politician, he half-ducked the question. “It’s important,” he responded, “to root ourselves in the neighborhoods. Even if you lose the campaign, you have built something—political mobilization.”

He had to catch the Chinatown bus back to Philly, and so drained the last of his IPA. The next day he was preparing to get arrested in solidarity with airline catering workers unionized with Unite Here. In The Philadelphia Inquirer the following day he was pictured, along with about a dozen other protesters—39 were arrested in the action—lying on the ground as part of a die-in. He officially launched his campaign for state Senate two weeks later.