We started with glasses of water in Favianna Rodriguez’s spacious Oakland studio, where the artist and organizer produces her provocative collages, woodblocks, jewelry, and posters. Though she’s just as often traveling the country giving talks or consulting organizations like Planned Parenthood on their storytelling strategies, or in the offices of the Center for Cultural Power, which she cofounded to support underrepresented artists engaged in social movements. “Basically,” she told me, “I’m a serial entrepreneur. I’m just one of those people, when I see opportunities, I take them.”

On the day I met her, she wore sparkly blue cat-eye glasses, a long scarf in the same yellow-and-orange tones common in her art, and a “Migration Is Beautiful” butterfly T-shirt, which she designed as a fundraiser. She’s just 5 feet tall, with a contagious smile accentuated by red lipstick.

As a queer Latinx woman of Afro Peruvian descent, she wants to not only create her own art but, as she put it, to build “a home for artists and activists, to help them navigate this white supremacist, fucked-up world that threatens to crush them.”

Despite her stark diagnosis, Rodriguez said she largely focuses on “joy-based narratives.” And you can see this in her art, which manages to be at once jubilant and challenging.

Take Liminality, for example, a 2018 collage on birch wood of a figure with a planet-like head above a warm spill of abstract shapes and color. The figure’s narrowed eyes are as fierce as a warrior’s while still having an almost Buddhist serenity. The blues and greens of the body slip into the red waves nearly flaming off of the head. It’s a vision, it seems to me, of the line limning the bleakness of contemporary discourse and the brightness of a radical future. 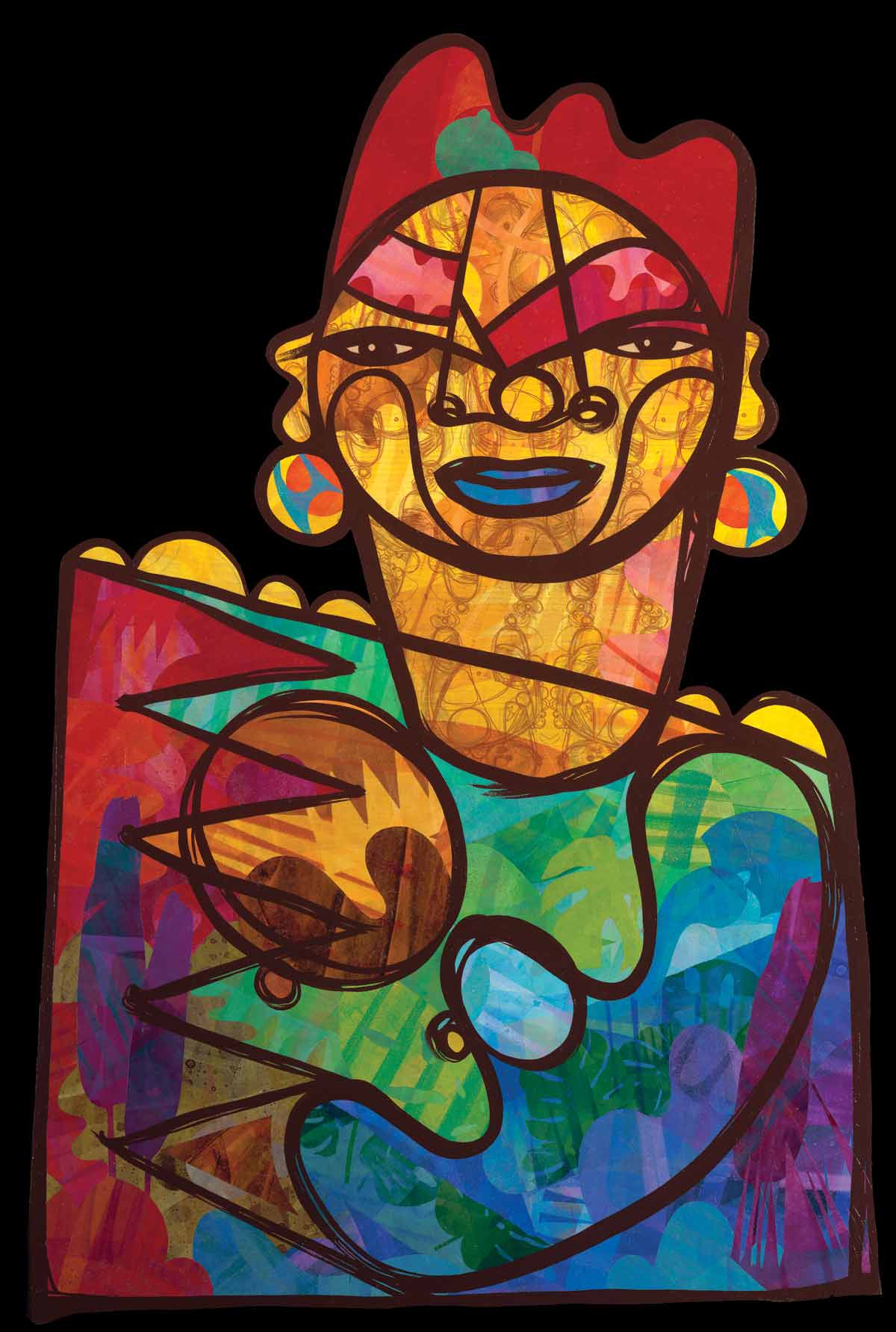 She showed me a collage that she was working on, inspired by a recent trip on ayahuasca, a brew of psychedelic Amazonian plants. There was an incipient figure—a head, a few hands, in what appears to be a dense forest on a navy background. Included are her signature shapes: wavy lips and brows resembling organelles. “My curves are part of my mark-making,” she told me.

After circling her studio, we made our way in her Nissan Leaf (she plans to buy a Tesla) to Calavera, a high-ceilinged brick-and-skull-themed restaurant specializing in Oaxacan fare just north of downtown Oakland.

Rodriguez grabbed us corner seats at the bar, where we perched on stools and ordered fancy cocktails and a plate of guac and chips. The Calavera wait staff wore shirts that read, “I ♥ Ma.Gueys” a pun on maguey, the agave plant that is used to produce mezcal, and “my gays.” When the wordplay registered with her, Rodriguez said gleefully, “I love it!”

We clinked glasses, and went back to discussing art, sexual liberation, and artists’ struggles with sustainability—all subjects of her work.

In order to address such an array of ambitious themes and projects, Rodriguez has had to create her own institutions. Instead of waiting for some foundation to bestow support or some rich dude to bequeath his largesse, she’s started her own organizations to raise money and underwrite her work and that of other radical artists of color.

In her early 20s, Rodriguez founded her first company, which built websites for movement groups. She used that income to make art, and then co-founded Presente.org—an organization dedicated to lifting up Latinx voices through social media campaigns, fundraisers, and political actions. Next she co-founded Culture Strike, which has recently morphed into the Center for Cultural Power and describes itself as “an artist-of-color-led organization building the infrastructure and cultural assets to support artists and storytellers for social change.” Through these organizations and her studio, she now employs over 20 people, and insists on giving them health insurance. “I have to invest in beauty that will last,” she said.

Somehow she is still able to spend hours building and arranging her cut-outs, but she now has an assistant to help make the thousands of intricate snips—there were tables full of paper leaves spread out across her studio. I asked her if having someone else do that sort of scissor work changed the way she approached her art. “Of course!” she said. “It gives me more time to focus on what I need to focus on.” Plus, she pointed out, other major artists have their assistants and workshops.

Recently, Rodriguez has shifted her focus—both on canvas and on the streets—to climate change. “I like how Greta says it’s a fairytale,” she said, referring to Greta Thunberg, the 16-year-old Norwegian climate activist. It is a myth, Rodriguez said, that we can extract and exploit endlessly and not expect to reap the catastrophic consequences, “which is why we need new stories to describe our relationship with nature.”

Changing the narrative is not, for her, just splicing images of nature into her artwork. “I need to have a personal practice in the studio,” and “embody what I want of the world,” she said. Besides recently going vegan, she’s trying to create imagery that drives home the urgency of the climate crises in a way that makes sense to people who grew up, like she did, in Oakland or other cities neglected by the state.

Concern for the polar bears? “That’s a white male worldview, that’s not how most people actually relate to nature,” she said. She sees the art world in general as “a product of funding expressions of whiteness,” and wants to start lifting up an indigenous worldview—one where humans are shepherds of nature rather than owners. “Yo, we are not going to win unless we tell the stories, our stories, of what we want the world to look like,” she told me, adding that our “visual, emotional, and cultural experiences are largely told to us through white men.” Just being an artist, she told me, is resisting that narrative.

Despite her activism, she doesn’t think of herself as a tendentious artist. “I don’t approach my art through issues. I approach it through my diverse identities. My art is a way I can transform these experiences and relationships into symbols. I am creating objects that only I can create”—hence the pussy power collages, the celebrations of the orgasm, and the ayahuascan blend of human and plant in some of her newer work. Merely broaching these subjects is important for Rodriguez.

At which point, she downed the rest of her drink and called for the bill.