adison, isc.—Wisconsin is the most politically divided state in the country. It has one Democratic Senator and one Republican. It has a Democratic governor and a Republican legislature. It gave Donald Trump 47.22 percent of the vote in 2016 to 46.45 for Hillary Clinton.

So it shouldn’t come as a surprise then that Wisconsin is one of the biggest battlegrounds in the fight over the “issue” that shouldn’t even be an issue: whether to wear a mask in order to prevent the spread of Covid-19.

Until last week, Wisconsin was the only state with a Democratic governor that did not have a mask mandate.

Why? It’s not because Governor Tony Evers, a 68-year-old former science teacher, does not recognize the need for masks.

It’s because every time Evers tries to advance a public-health mandate, the Republican-controlled legislature moves to upend it—and the right-wing judicial activists on the state Supreme Court side with the ghouls who control the state Assembly and state Senate.

Ruben Gallego Is More Than Just an Alternative to Kyrsten Sinema

As they do on so many issues, nationally and in Wisconsin, Democrats find themselves in the surreal position of being told that they are against “freedom” because they want to save lives.

The madness of the moment was summed up by Congressional Progressive Caucus cochair Mark Pocan, who noted at the end of a harrowing July for the state that “the numbers are staggering. As of right now, Wisconsin has over 50,000 confirmed positive COVID-19 cases and almost 900 confirmed deaths. If those numbers seem low to you compared to states like Texas and Florida, think again. Before last week, Wisconsin had never reached a single-day total of over 1,000 positive COVID-19 cases. Last week, we surpassed 1,000 cases on three separate days. On top of that, more deaths were reported last week than any other week in July.”

So, while masks, social distancing, and testing, should not be political issues, they are. And Democrats are left asking themselves questions that sum of the dangerously off-kilter politics of 2020: How do you respond to irresponsibility? How do you counter claptrap?

Wisconsin legislative candidate Francesca Hong has come up with her answer. She regularly posts social media images of herself wearing face coverings to protect against the spread of Covid-19, and she has coupled the images with a message: “#WearADamnMask.”

Hong, one of a number of Democratic candidates in an August 11 primary for a Madison–based 76th state Assembly seat, leaves no doubt about her position on the supposedly controversial issue of whether Wisconsinites should take reasonable steps to combat the pandemic.

She’s made herself the #WearADamnMask candidate—and good on her for that. 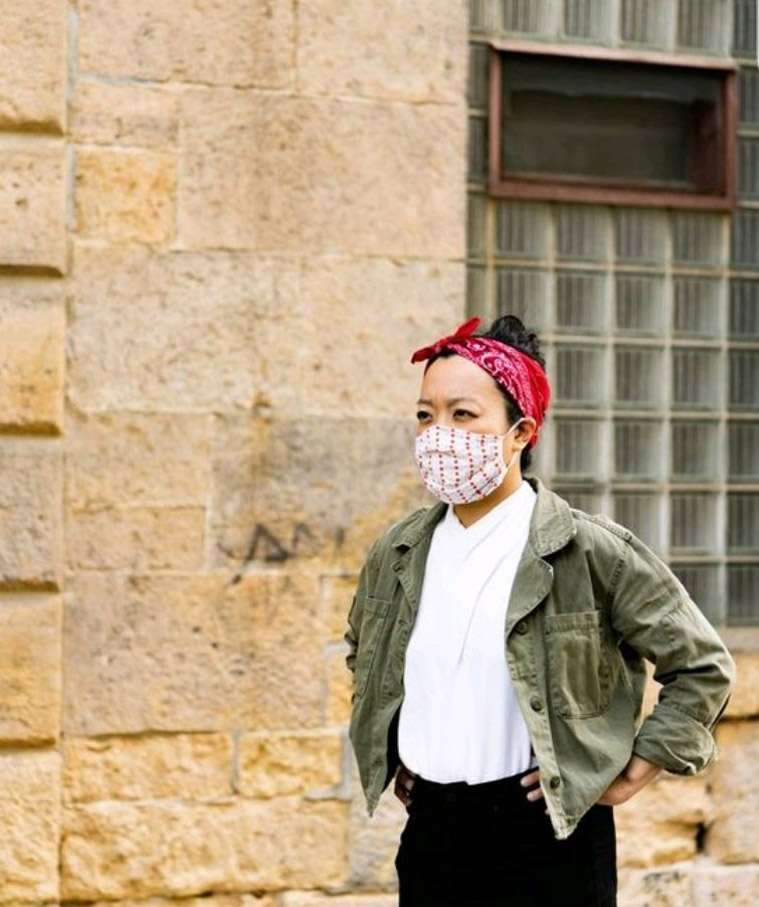 Right-wing Republicans, from Washington to Madison, have rejected science and common sense from the start of the coronavirus pandemic. They have attacked legitimate and necessary public health mandates and politicized discussions about public safety with an eye toward dividing voters at a point when unity of purpose may be more essential than at any time in the modern history of the country. That’s wrong. But that’s where the debate stands in 2020.

Candidates who recognize the seriousness of the threats we face must take a stand—and they must do so aggressively.

This is no time for cautious language or compromise positions. At a point when more than 150,000 Americans have died from Covid-19, when case numbers are surging in Wisconsin and across the country, when decisions about reopening schools and businesses are being placed on hold because of the failure of the Trump administration and its political allies to address this crisis, we have reached a “Which Side Are You On?” moment.

Hong—an issue-oriented progressive who campaigns as “a second-generation Wisconsinite, mother, community organizer, and service industry worker”—is clear about the side she is on.

She didn’t just hail last week’s decision by Evers to again try to get a mask mandate in place by declaring a statewide public health emergency and issuing an emergency order requiring Wisconsinites to wear face coverings. She posted another masked image and repeated the “#WearADamnMask” message.

When right-wing state Senator Steve Nass urged his Republican legislative leaders “to immediately call the Legislature back into session to pass a joint resolution ending Governor Evers’ new illegal and unnecessary emergency declaration,” Hong pushed back with an appropriate mix of fury and scorching sarcasm.

“Oh so now you want to go to work. Not because almost 1,000 people have died in Wisconsin from Covid19, the economy is permanently damaged and we are in the midst of multiple public health crises as well as being the most segregated state in the nation,” she wrote. “Woooooooooooow.”

Hong is blunt and unapologetic.

“Instead of suppressing the virus and condemning racism,” she says, “Wisconsin GOP leaders are leading the charge in perpetuating multiple public health crises.”

Like Pocan—the Wisconsin Democrat who regularly mocks the “ignorant politics” of Republicans who are on the wrong side of science—Hong refuses to respect the absurd pronouncements of political charlatans.

That’s the right response. When lives and livelihoods are at stake, the cautious messaging of the past doesn’t cut it. Too much is at stake for anything less than a #WearADamnMask politics.