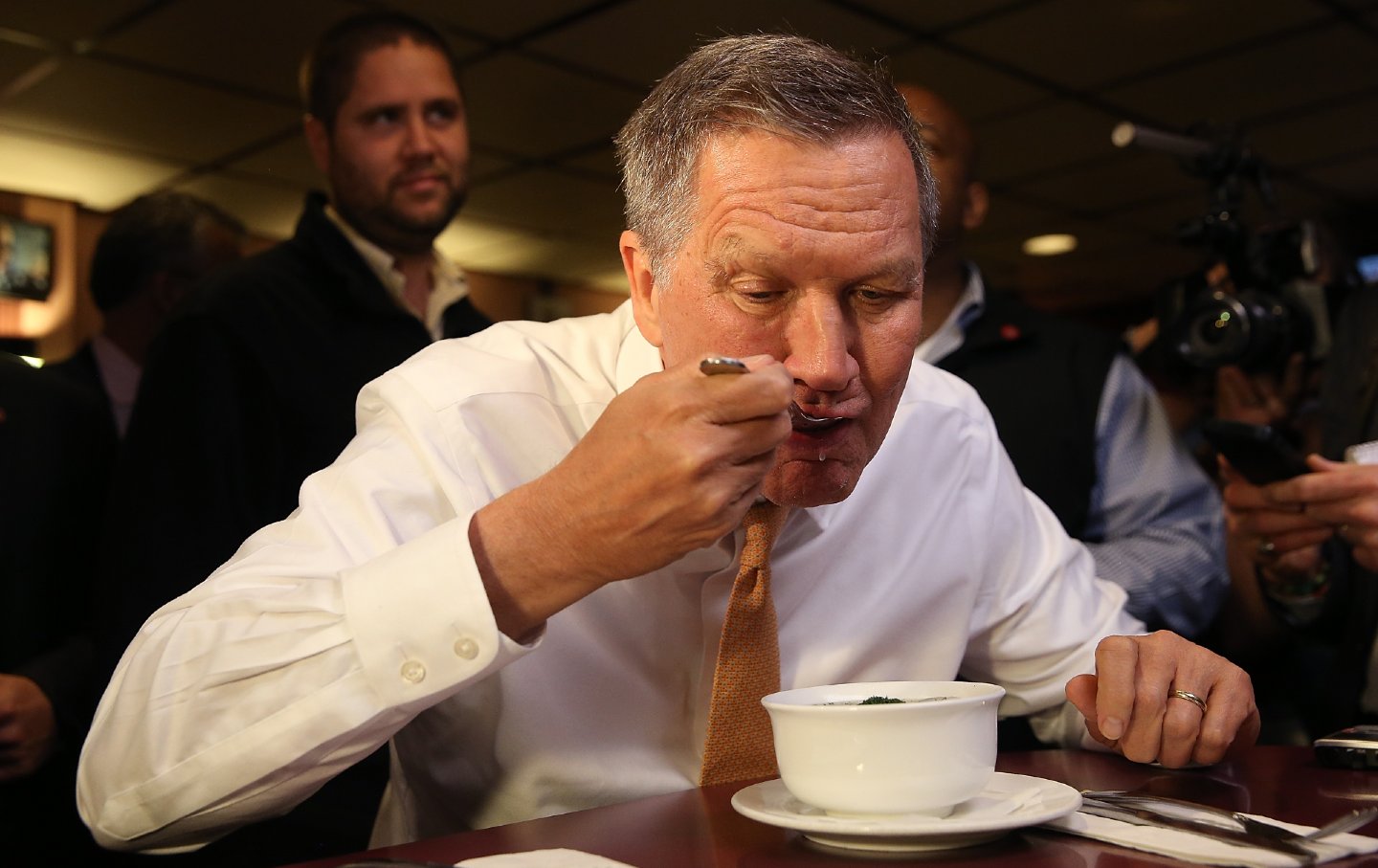 The Associated Press reports that the Joe Biden campaign has reached out to former Ohio governor John Kasich to speak on his behalf at the Democratic National Convention. Kasich, an anti-abortion, pro-gun Republican, ran for the Republican nomination for president in 2016. When he didn’t win, he voted for… John McCain, even though McCain wasn’t even on the ballot. So he speaks for a critical constituency of people who understand that Donald Trump is not fit to be president but can’t be bothered to use their vote to help.

I can see why it’s important for Biden and the Democrats to secure Kasich’s endorsement. There are likely 15—maybe 20—white men in Ohio who aren’t sure Biden is a moderate enough alternative to the bigoted, authoritarian president who finds the deaths of 140,000 Americans too boring to distract him from his daily routine of retweeting white nationalists and hiding his financial crimes. Kasich can soothe those voters who are disappointed that Trump is “not hurting the people he needs to be hurting.”

Sorry, I’m being sarcastic. I do not think it is a good idea for the Democratic National Convention to feature failed Republicans. I don’t think that having a “big tent” means it’s necessary to highlight people who would knock down your tentpoles.

I suppose I should get used to it. Between now and November, the Biden campaign will probably trot out a host of failed Republican presidential candidates and other politicians who have been kicked out of their own party. Endorsement by people who failed to beat Trump, failed to stop Trumpian forces from taking over their party, and, in some cases, created the dynamics that led to Trump’s takeover will be treated as a good thing. These Republican validators will be uniformly white and overwhelmingly male, and they will bring with them no voting blocs.

None of Biden’s Republican endorsers will do any significant work to help Democrats take back the Senate, which is necessary for any Democratic policies to be enacted in a new administration. Every moment that the DNC wastes on the likes of Kasich or Carly Fiorina or somebody who wishes John McCain had defeated Barack Obama in 2008 is one less moment for Democratic Senate contenders like Jamie Harrison or Sara Gideon or Mark Kelly or MJ Hegar or Amy McGrath.

In fact, I’m starting to feel that all of this crowding of the airspace and fundraising space by Never Trump Republicans is by design. The best outcome for lifelong Republicans who hate Trump is that Biden wins but is too hobbled by a GOP-controlled Senate to get anything done. Republicans, even “former” Republicans, always play to win. As John Nichols wrote just last week, “If Biden is elected but Republicans maintain control of the Senate, he will enter office as a lame-duck president.” That sounds like exactly the kind of “victory” lifelong Republicans are after.

Where were Never Trump Republicans when their party nominated a two-bit simpleton and his daddy’s warmongering pal in 2000? Where were they when people merely asked that all of the votes in Florida be counted? Where were they in 2004 when the same forces that later got Trump elected Swiftboated John Kerry’s heroic war record? Did Never Trump Republicans call for helicopters to be sent to help the victims of Hurricane Katrina? How did these allegedly “good” Republicans react when proto-Trump Sarah Palin was nominated for vice president in 2008? Do they still want to see Obama’s birth certificate? Did the Republicans who now defend the Affordable Care Act in the face of Medicare for All come to that position after the 53rd time House Republicans voted to repeal Obamacare, or was the 54th and final time the straw that broke the camel’s back?

No, I’m not done. I’m not done remembering the Republican silence when John Roberts gutted the Voting Rights Act, which is the proximate cause for Trump’s winning the Electoral College. I can still recall the deafening silence from Republican elected officials and pundits when Mitch McConnell refused to give Merrick Garland a hearing. I recall begging for Republicans to oppose Brett Kavanaugh when he was merely a partisan operative with a history of lying to Congress, long before he was credibly accused of attempted rape. None of them did.

Some of us are Never Trumpism, not merely Never Trump. It would be nice if the Democratic Party understood the difference.

I know why some Democrats can’t spot the con. Despite the fact that the base of the Democratic Party consists of people of color and women, there are Democrats who are still waiting for the white working class to come back to them. One white guy in Cincinnati is worth more to some Democrats than 100 Black guys in Cleveland.

The problem with that logic—well, one problem with it—is that there is no evidence that Kasich is the person to win Ohio for the Democrats. If Democrats want to win back Ohio, they shouldn’t turn to Kasich; they should turn to Sherrod Brown, the Democratic senator from Ohio who was last seen beating the absolute bag out of a Trumpy Republican challenger in 2018.

The Trump Administration Is on a Capital Punishment Killing Spree

Brown, according to exit polls, lost with white men in Ohio. He was trounced, 59-41, in that demographic. He lost whites without a college degree, 61-38—and whites without a college degree are a fairly important demographic in the Rust Belt. Did Brown go crying to Kasich to help him out? No, he did not. Instead, he went out there and won women, 60-40; Black people, 89-11; and 91 percent of the Black woman vote. Brown turned out the Democratic base, and it was more than enough to win statewide in Ohio.

Joe Biden is not going to win white men in Ohio in 2020. He’s not going to win them nationally, either. Unless John Kasich has some plan to inspire women and Black people to vote for Biden, neither he nor any Never Trump Republican is going to be all that helpful in the upcoming election. The sooner Democrats accept that the uneducated white man is not coming back to the party, the better their chances of defeating Donald Trump.