Immigration and Customs Enforcement (ICE) can now operate in greater secrecy, thanks to a special security classification quietly granted to it by the Trump administration. While ICE chief Matthew Albence heralded it as “a tremendous achievement,” experts say the designation deals a blow to transparency.

On June 11, the administration classified ICE as a “Security Agency,” according to a memo signed by Albence and dated June 26. This new designation puts ICE employees in the same category as high-level intelligence officials, and blocks from disclosure information that is typically public, such as name, job title, and salary. The memo was provided to The Nation by an ICE official on condition of anonymity. The memo states:

I am pleased to announce that on June 11, 2020, the Office of Personnel Management (OPM) approved ICE’s request to be identified as a “security/sensitive” agency for Freedom of Information Act (FOIA) purposes. This designation will ensure that OPM withholds all relevant personally identifiable information (PII) of all ICE personnel where it processes FOIA requests moving forward, just as it does for other law enforcement agencies and federal prosecutors.

While it’s true that some law enforcement agencies enjoy this classification, many do not; in the past it has been limited to top-tier agencies like the FBI and Secret Service. And as the memo goes on to note, the new designation doesn’t just apply to field agents, but rather to all ICE employees.

“For many years, ICE has worked to be designated, in its entirety, as a ‘security/sensitive’ agency, so that OPM would withhold all employee information under FOIA Exemption 6 (unwarranted invasion of personal privacy),” the memo states.

“Designating ICE as a security agency is a clear attempt to shield agents from accountability,” Emily Manna, policy director at Open the Government, told The Nation. “The Freedom of Information Act already contains a sufficient exemption to protect legitimate personal privacy interests. Preventing the public from obtaining any information about ICE agents—who are public officials—is a violation of the public’s right to know and should be reversed immediately.”

The memo claims the classification is necessary to protect its staff from increased threats in recent years, saying:

The increase in threats, intimidation, and doxing directed at ICE personnel in recent years underscored the need for this designation. Numerous examples of the harassment and threats you have had to endure were used to impress upon OPM that the ongoing disclosure of our employees’ identifying information under FOIA was simply unacceptable.

The memo provides no examples.

ICE has come under increasing criticism in recent years, due to the Trump administration’s hard-line immigration policies. This has culminated in major protests in front of different ICE field offices, which an ICE employee told The Nation contributed to a sense of paranoia within the agency. Last year, I reported on an internal ICE memo detailing a program called “Operation Frozen Shield,” which authorized enhanced security measures, including Federal Protective Services deployment to protect against threats like active shooters.

For years, low employee morale has plagued ICE, where morale is among the lowest at any federal agency; in 2017, ICE ranked 288th out of 330. As I reported last year, Kevin McAleenan, chief of ICE’s parent agency, Department of Homeland Security (DHS), sent out an internal e-mail celebrating a modest 2 percent increase in employee morale.

Last year, McAleenan also issued a public statement drawing attention to an incident in which a man firebombed an ICE detention facility in Tacoma, Wash. Though no ICE employees were injured, McAleenan decried the incident as “only the latest among other recent examples of violence and hostility directed toward our DHS.”

While ICE’s argument for the security agency classification is its need to protect staff, it could hurt ICE employees in some cases, according to Irvin McCullough, national security analyst at the Government Accountability Project.

“Sometimes whistle-blowers are forced to FOIA records to support their case,” McCullough explains. “When ICE is designated—in its entirety—as a security agency, whistle-blowers’ and the public’s right to information is weakened. Underpinning this move are concerns that this administration is abusing its redaction authorities. It’ll be important for freedom of information advocates and congressional overseers to ensure ICE isn’t abusing this overly broad status.”

ICE isn’t the first immigration-related agency to receive this designation. In February, The Nation reported that the Trump administration had reclassified Customs and Border Protection as a security agency. The designations appear to represent a gradual move away from traditional immigration mandates and toward those of an intelligence agency.

That status is one that ICE appears to have coveted for years. In 2018, The Daily Beast reported that dating back to the Obama administration, ICE leadership has sought to join the US Intelligence Community, the consortium of spy agencies which could have granted ICE extraordinary privileges. ICE was never granted admission.

The memo closes on a personal note, with Director Albence exhorting staffers to “remain strong, stand proud, and above all, be safe.” 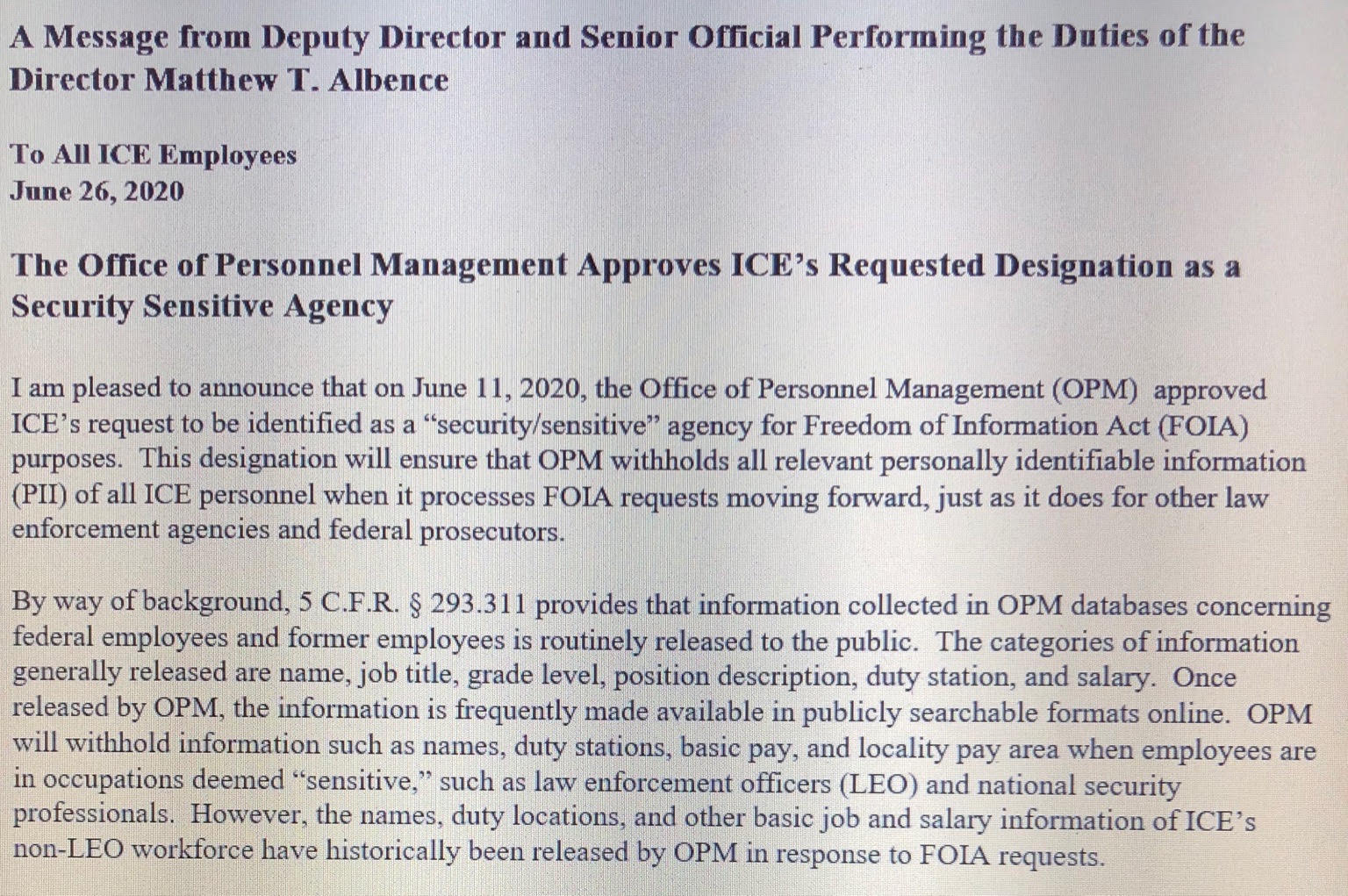 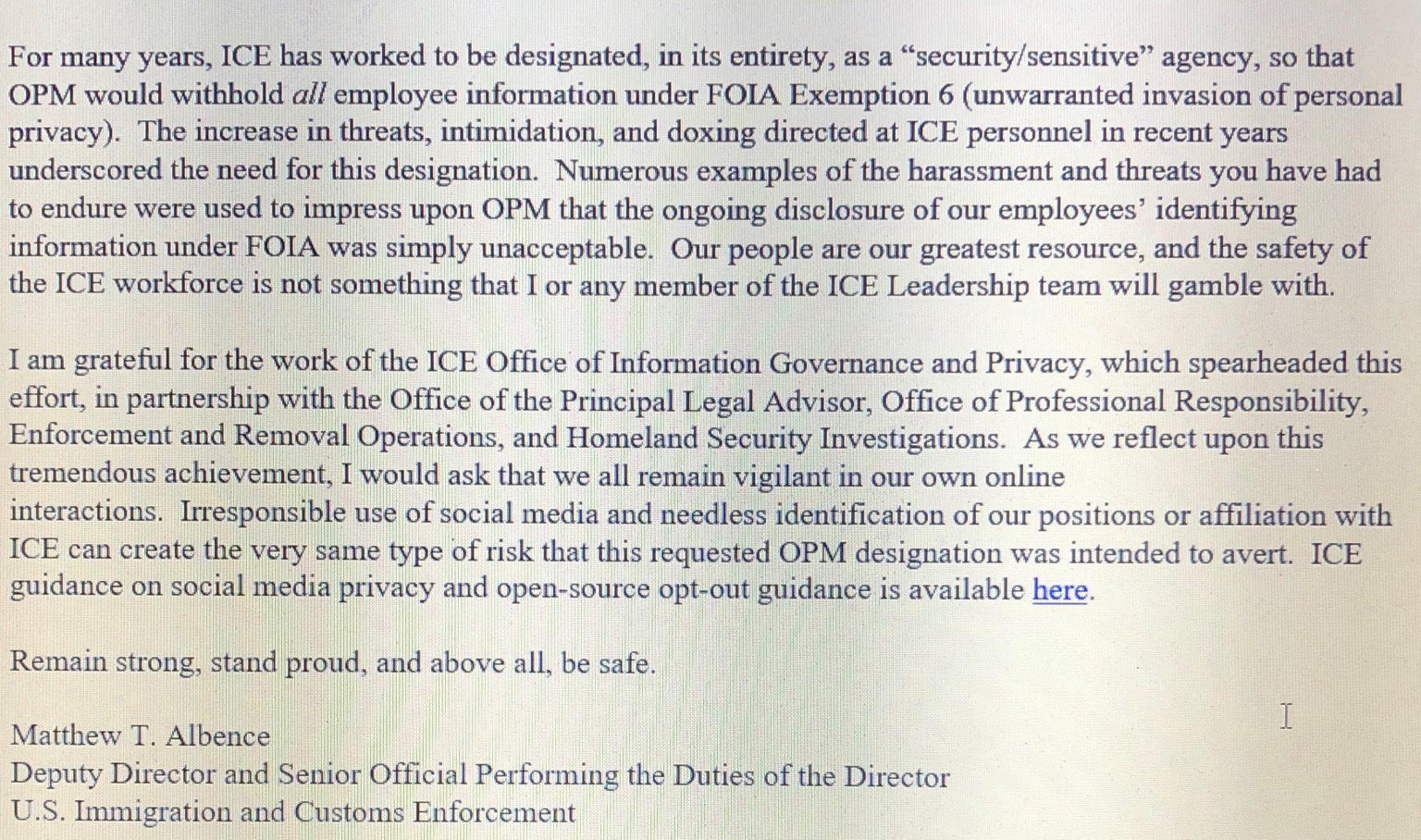