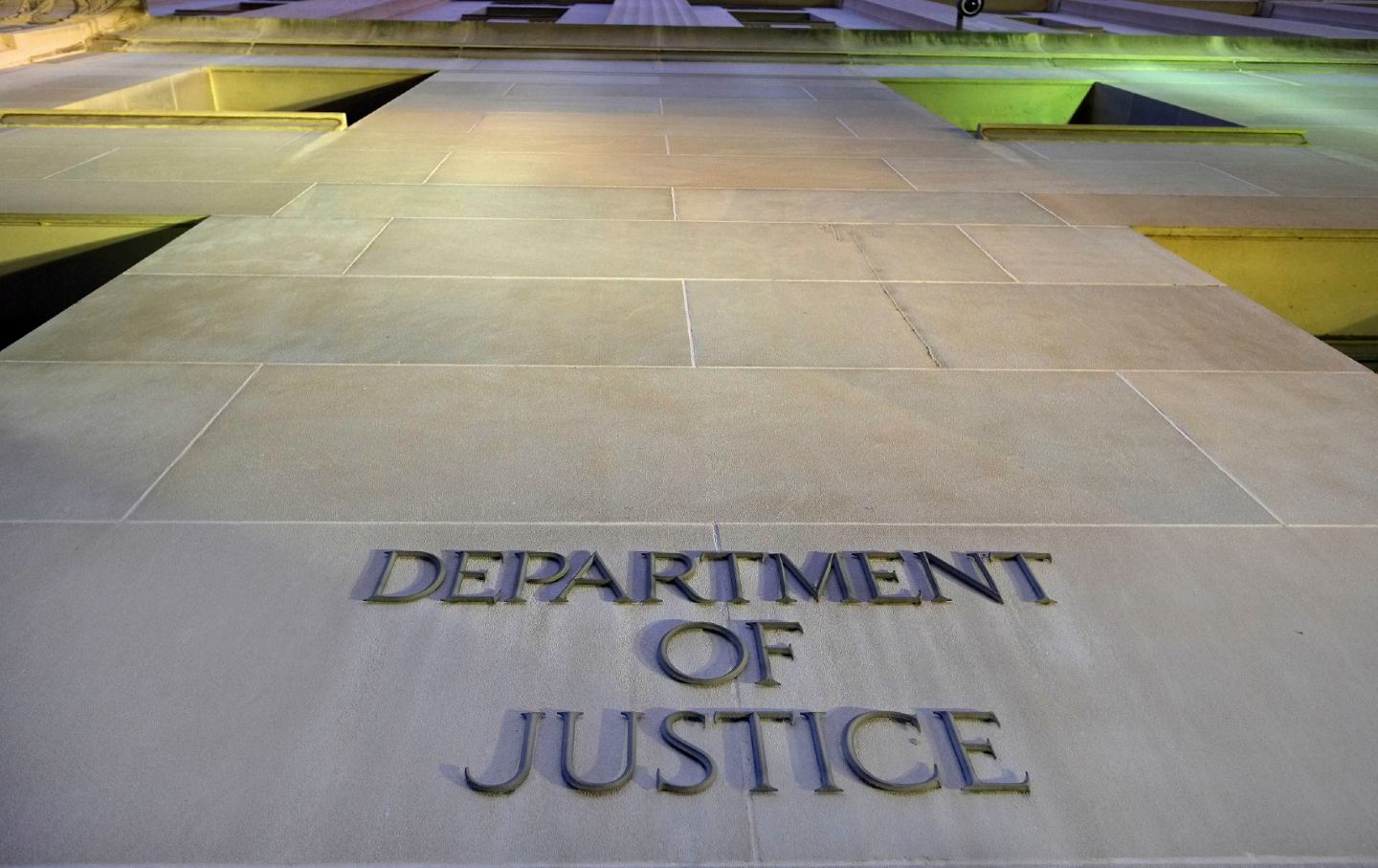 Just eight miles from the White House, the Trump administration has quietly opened a new front in its war against immigrants. Inside a 26-story office tower next to a Target in Falls Church, Va., the Board of Immigration Appeals has broken with any pretense of impartiality and appears to be working in lockstep with the administration to close the door on immigrants’ ability to remain in the country.

Under previous administrations, the BIA was ostensibly impartial and bipartisan, though mainly out of a long-standing tradition of promoting judicial objectivity. Since the entire immigration court system is contained in the Department of Justice—within an administrative agency known as the Executive Office for Immigration Review (EOIR)—immigration judges, including those serving as board members on the BIA, are employees of the DOJ, and, by extension, are part of the executive branch. Unlike their counterparts in the federal judiciary, immigration judges are not independent.

Since 2018, the Trump administration has exploited its powers over the BIA by expanding the board from 17 to 23 members to accommodate additional anti-immigrant hard-liners. Justice Department memos obtained by the American Immigration Council and the American Immigration Lawyers Association show that the EOIR pushed shorter hiring timelines, which were used to bring on judges with more restrictionist records.

Now the court is stacked with members who have consistently ruled against immigrants, such as one judge who threatened to unleash a dog on a 2-year-old boy during a hearing. Numbers obtained by a law firm through a Freedom of Information Act request show that the six BIA judges appointed by Attorney General William Barr had all granted asylum in less than 10 percent of cases in fiscal year 2019. (One never granted asylum, despite hearing 40 cases.) An EOIR spokesperson told The Nation in an e-mail that “EOIR does not choose Board members based on prohibited criteria such as race or politics” and that “Board members are selected through an open, competitive, merit-based process.”

The most notable example of the administration’s preference for ultraconservative judges came in late May, when Barr appointed David H. Wetmore as BIA chairman. Wetmore, a former immigration adviser to the White House Domestic Policy Council, was around for some of the Trump administration’s most egregious policies, including the travel ban and family separation policy.

Although only two decisions have been issued since Wetmore was appointed chair, he seems set to pick up where his predecessor, former Acting Chair Garry G. Malphrus, left off. Malphrus, a George W. Bush holdover, became the face of the court’s lurch to curtail immigrants’ legal protections since Trump took office. He had the hawkish bona fides that made him an ideal chairman under the Trump DOJ: From 1997 to 2001, he served as chief counsel to onetime segregationist Senator Strom Thurmond on the Senate Judiciary Committee, and he was made associate director of the White House Domestic Policy Council after his role as a “Brooks Brothers” rioter during the 2000 Bush v. Gore recount in Florida—during which GOP operatives staged a protest that disrupted a recount and may have handed Bush the presidency.

Malphrus was made acting chair in 2019, and authored 24 of the 78 BIA precedential decisions issued under the current administration. Almost all of these precedential decisions have made it more difficult for immigrants to win their cases. The board made it harder for victims of terrorism to win asylum and raised the bar of evidence needed for several types of protections.

“It’s not a court anymore. It’s an enforcement mechanism,” said Paul Wickham Schmidt, who was himself chair of the BIA between 1995 and 2001 and now writes a popular immigration blog called Immigration Courtside. “They’re taking predetermined policy and just disguising it as judicial opinions, when the results have all been predetermined and it has nothing to do or little to do with the merits of the cases.”

Consider this: In a case decided in January, the BIA was considering whether an immigration judge had erred in refusing to postpone a removal decision for a person awaiting a decision on an application for a U visa—a type reserved for victims of certain crimes or those cooperating with authorities investigating a crime. (ICE had recently changed its policies to make it easier to deport people in this situation.) The BIA sided with the judge, acknowledging that the crime victim was “eligible for a U visa” but was not entitled to wait to receive it, in part because of his “lack of diligence in pursuing” one. The decision signals that immigrants eligible for crime victim visas, and who are willing to cooperate with law enforcement, can still be deported.

While federal courts hear public oral arguments and largely deliberate openly, the BIA typically uses a paper review method, which means it receives briefs from opposing parties and hands down a decision some time later, with the whole intervening process being shrouded in secrecy. “Unlike federal courts, where unpublished decisions are still accessible by the public, and so you can track what judges are saying in decisions that do not make precedent, the [BIA] only sporadically releases those decisions,” said Aaron Reichlin-Melnick, policy counsel at the American Immigration Council.

Unpublished decisions are not precedential and cannot be cited in future cases. Precedential decisions are typically decided by majority vote of the permanent board members, though recent changes also enable the attorney general to designate any decision as precedential.

Aaron Hall, a Denver immigration attorney who has been tracking the BIA’s decisions, said that while he has seen unpublished wins for respondents, almost all published decisions sided with the government. This threatens to impose long-standing rules to be followed by immigration judges for years. “These decisions aren’t things that go away just because there’s a new administration,” Hall said. If there is a change in administration, “it’s not that everything turns on a dime to restore the jurisprudence to what it was before.”

BIA members are also appointed by the attorney general, and, as Schmidt put it, just as easily “unappointed.” They aren’t lifelong commissions. “Just because they were appointed by [Attorney General WIlliam Barr] doesn’t mean Barr couldn’t remove them if they didn’t perform to expectations,” said Schmidt. A recent memo reported by CQ Roll Call’s Tanvi Misra shows that the EOIR tried to convince pre-Trump judges to retire or take buyouts. The EOIR has also created the new title of “appellate immigration judge” last year to allow judges to simultaneously serve at both the immigration court and appellate court level, a potential conflict of interest. In the latest two BIA decisions, the panelists—including former chair Malphrus—are described with the new designation.

While the BIA has always to an extent suffered from political pressure as part of bureaucracy of the executive branch, Schmidt believes things have shifted from his tenure, with the illusion of an impartial process having been shattered.

Though the attorney general can overrule the BIA as well as directly set precedent, the BIA issues many more decisions. The board has authored 78 out of 87 precedent-setting decisions during the Trump administration, with the other nine having come down from the attorneys general. According to Hall’s analysis, all but 10 of these precedential decisions have sided with the government.

Schmidt said he believes that the court is essentially going down a checklist, implementing administration policy rather than actually addressing unclear points of law. “It seems to me that rather than looking at important issues or cases that really need to be resolved, they cherry-pick the precedents,” he said.

In Matter of J-J-G-, decided in March, the BIA struck a blow to “cancellation of removal,” one of the few avenues of relief for immigrants who have otherwise lost their cases in court. It requires them to prove that their deportation would result in exceptional hardship to a child or parent who is US citizen or resident. In this case, the anonymous respondent, J.J.G., claimed that his daughter, a citizen, would face medical hardship due to her hypothyroidism if he was deported to Guatemala. Although Hall says the man would have qualified for cancellation under criteria that had been standard for about two decades, the immigration judge took the view that because treatment for hypothyroidism was available to some extent in Guatemala, the standard for “exceptional and extremely unusual hardship” had not been met. The BIA upheld.

“The danger is that it will give judges who might be inclined to deny these applications the language and the citation that they need” without doing a full evaluation of the circumstances of the case, said Hall.

The sense that the board is sometimes straining to interpret the law in the most anti-immigrant manner possible isn’t just coming from immigration attorneys or advocates. BIA decisions can be appealed up to federal circuit courts; on more than one recent occasion, federal judges have struck down BIA decisions with irritation. In one case, Doe v. Attorney General, a 26-year-old, gay Ghanaian man had been beaten, covered in kerosene, and threatened with beheading by a mob that included his own father after he was discovered having sexual relations with another man. He eventually arrived in the United States and petitioned for asylum, where an immigration judge found that he had been unable to establish persecution based on his sexual orientation. The BIA upheld the decision, finding his account of the incident credible, but not enough for asylum protections.

In a decision earlier this year, a panel of the US Court of Appeals for the Third Circuit dismantled the government’s case. Yes, he was beaten and threatened because of his sexual orientation; no, the government of Ghana would not protect him; yes, of course the attack amounted to persecution. In response to the contention that the threats weren’t menacing or concrete, with which the BIA agreed, the panel wrote, “We find it odd for the Government to make this argument here considering that [Doe] was threatened with death by fire or decapitation while being assaulted, doused with fuel and exposed to a cutlass. All that was left for the mob to do was to cut off his head or set him on fire.” (In individual circumstances, circuit courts have sent cases back to the BIA after it has refused appeals to continue the cases of crime victims awaiting U visas, even though the precedential decision as a whole still stands.)

The problem with this is that federal judges get to pull apart only the BIA cases that land on their desks, and the vast majority don’t. “For every one of those that are fortunate enough to be able to get to the appellate courts, there’s dozens of people being railroaded out, either without getting a fair shake in immigration court or without ever getting to immigration court,” said Schmidt.

Reichlin-Melnick’s theory is that the administration wants to make the BIA just another government agency. “[James] McHenry”—the EOIR’s director and a former ICE employee—“wants to turn the Board of Immigration Appeals into something a bit more like the Social Security Administration: an institution that doesn’t really function as a court functions,” he said. Instead, it will be focused on implementing the administration’s agenda.

For hundreds of thousands of immigrants, it doesn’t matter if the anti-immigrant paper pushers in this obscure administrative body are tossed out and all of the policy is slowly reversed by another administration; for most, one shot is all they get. Whether a case was winnable before or even after the Trump BIA is irrelevant. The chance to stay in the United States will be lost forever.