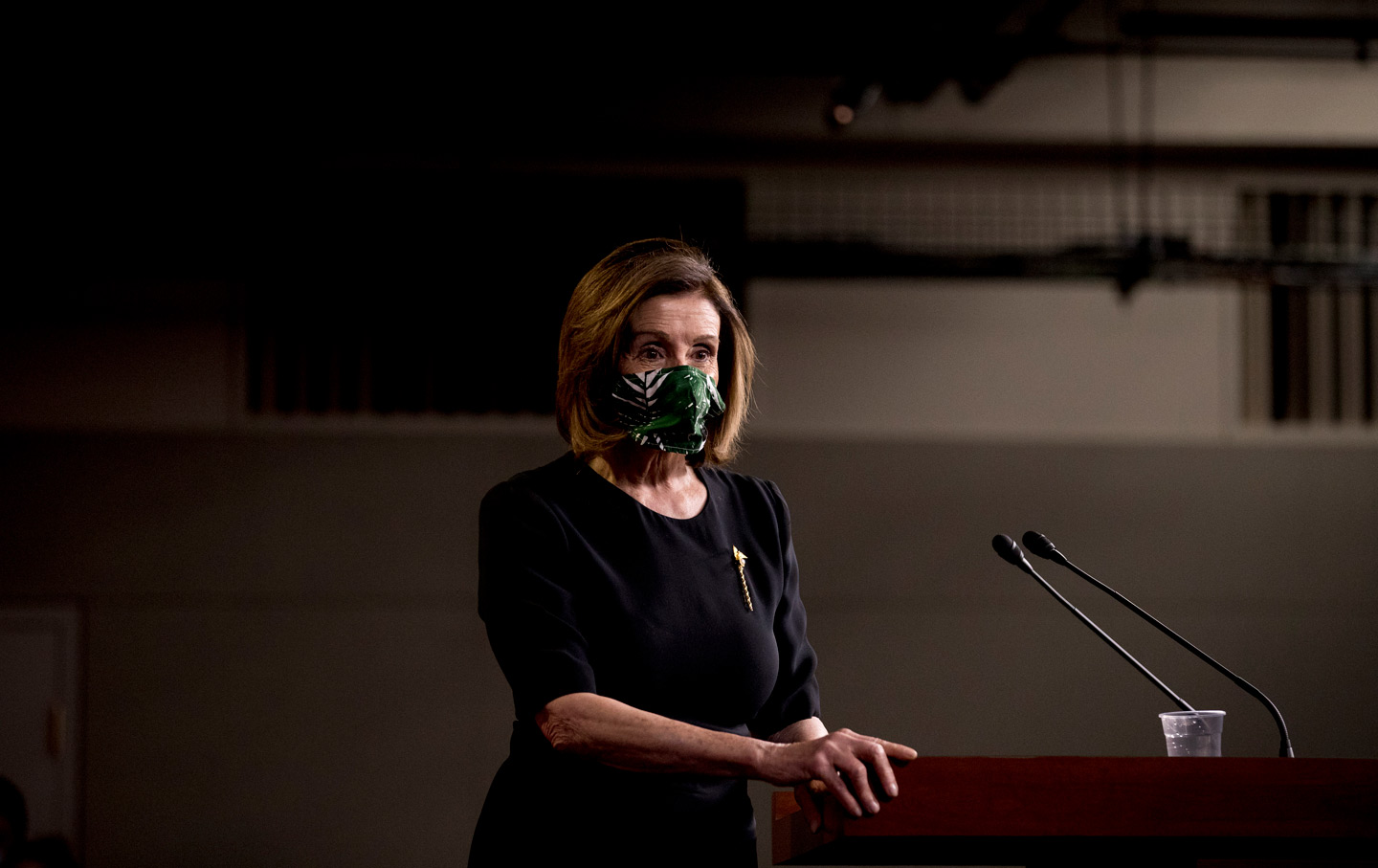 With unemployment at levels not witnessed since the Great Depression, hunger spreading among families with children, and even the Trump-appointed head of the Federal Reserve begging the Congress to act, House Speaker Nancy Pelosi introduced the $3 trillion HEROES legislation, which the House passed Friday. After months of backroom negotiations that conceded initiative to the Republican Senate, Pelosi has finally decided to drive the debate.

Inevitably, the 1,180-page bill—a bare-bones summary takes 90 pages—contains much good and some plain ugly. Its centerpiece is nearly $1 trillion in aid to states, localities, and territories, vitally needed to avoid massive layoffs and savage reductions in essential services from police to teachers. It extends enhanced unemployment benefits until January. It offers another one-off cash payment of $1,200 per person. Importantly, it would extend sick leave to all workers, correcting the cribbed program of the first rescue package. It provides expanded funding for food stamps and aid to women with children. Hazard pay rewards essential workers. The imperative ramping up of testing and tracing is funded. It would rescue the Post Office from bankruptcy. And $3.5 billion is allocated to help states prepare for vote-by-mail in the fall election.

Republicans immediately called it DOA. Trump announced that he was in “no rush” to pass new help, and he specifically denounced the vote-by-mail provisions. Senate Republican leader McConnell scorned it as “aspirational legislation,” regally announcing that he had “not yet felt the urgency of acting immediately,” and reemphasized that his priority was business liability protection, so owners can’t be sued by workers or customers who become infected because their negligence. With the economy cratering and despair deepening, the contrast could not be more stark.

Pundits, as well as Pelosi’s aides and allies, describe the proposal as a “message bill.” This is a disservice to the legislation, which is, in the context of this economic calamity, a sensible, if inadequate and cautious, response. Reality—and the approaching November elections—will dispel Trump and McConnell’s magical thinking sooner rather than later.

Trump Will Be Gone Soon. Now Comes the Hard Part.

The real message in the bill was sent not to Trump but to progressives inside and outside Congress. With Congress dispersed, Pelosi and her committee chairs maintained iron control of what went into the bill. And the message to progressives was clear: Not yet. No to recurring cash payments. No to guaranteed paychecks that would keep workers off unemployment, despite Representative Pramila Jayapal’s success in gaining widespread support for the proposal across the caucus. No to Medicare paying the health care costs of the unemployed. No to a jobs guarantee. No to a moratorium on rent and mortgage payments. No to student debt forgiveness. No public ownership stake in companies that are bailed out. No prohibition of corporate mergers or greater protection against private equity predators’ picking the bones of weakened companies. No major green infrastructure initiative.

While progressive initiatives were left on the cutting room floor, corporate lobbies cleaned up. Lobby associations made themselves eligible for the Payroll Protection Program. The wealthy got tax relief with the repeal of the limit on state and local tax deductions. Nothing was done to reverse the obscene $170 billion real estate investor tax break that was tucked into the first rescue package. And most brazenly, the bill calls for paying the full Cobra payments for the unemployed, a direct, costly, and shameless subsidy to the insurance companies.

Progressives got the message. The cochairs of the Congressional Progressive Caucus, Mark Pocan and Pramila Jayapal, called for a delay in the vote so members could assess the act to ensure “it truly reflects the priorities and the work of the entire caucus.” Pelosi immediately denied the request, assuming that they would not dare to vote against the bill. Senator Elizabeth Warren diplomatically applauded the effort but noted that “more work needs to be done.”

What we have here are differing takes on reality. Trump and McConnell are betting the economy will rebound when states “reopen.” They are eager to use the crisis to break public employee unions and roll back state and local safety net programs. They worry most that support for the unemployed will lessen their willingness to accept miserably paid jobs in the midst of a continuing pandemic. Pelosi and her leadership understand the need for bold public action to help working people, save cities and states, and help generate the demand needed to get the economy going. They don’t yet embrace the reality that the old normal isn’t coming back and wasn’t working in any case, that fundamental structural change is needed to create a decent society. Progressives have begun to detail the elements of a new New Deal that would move us in a new direction, but they haven’t yet been able to build the outside pressure that would force this agenda on the leadership—much less past McConnell and Trump.

The House passed the bill largely in its original form. Senate Republicans will eventually come to the table. What emerges will be less ambitious and more riddled with corporate giveaways. But it will soon become clear that “reopening” won’t revive the economy. Many industries will shrink; many businesses will go belly up. Restaurants, entertainment companies, universities, car companies, airlines, the health care industry, commercial real estate, and more will face existential challenges. Americans will come to realize that “getting back to normal” isn’t happening. Then the question of fundamental alternatives will have to be addressed, and an even bolder progressive agenda will be harder to ignore.