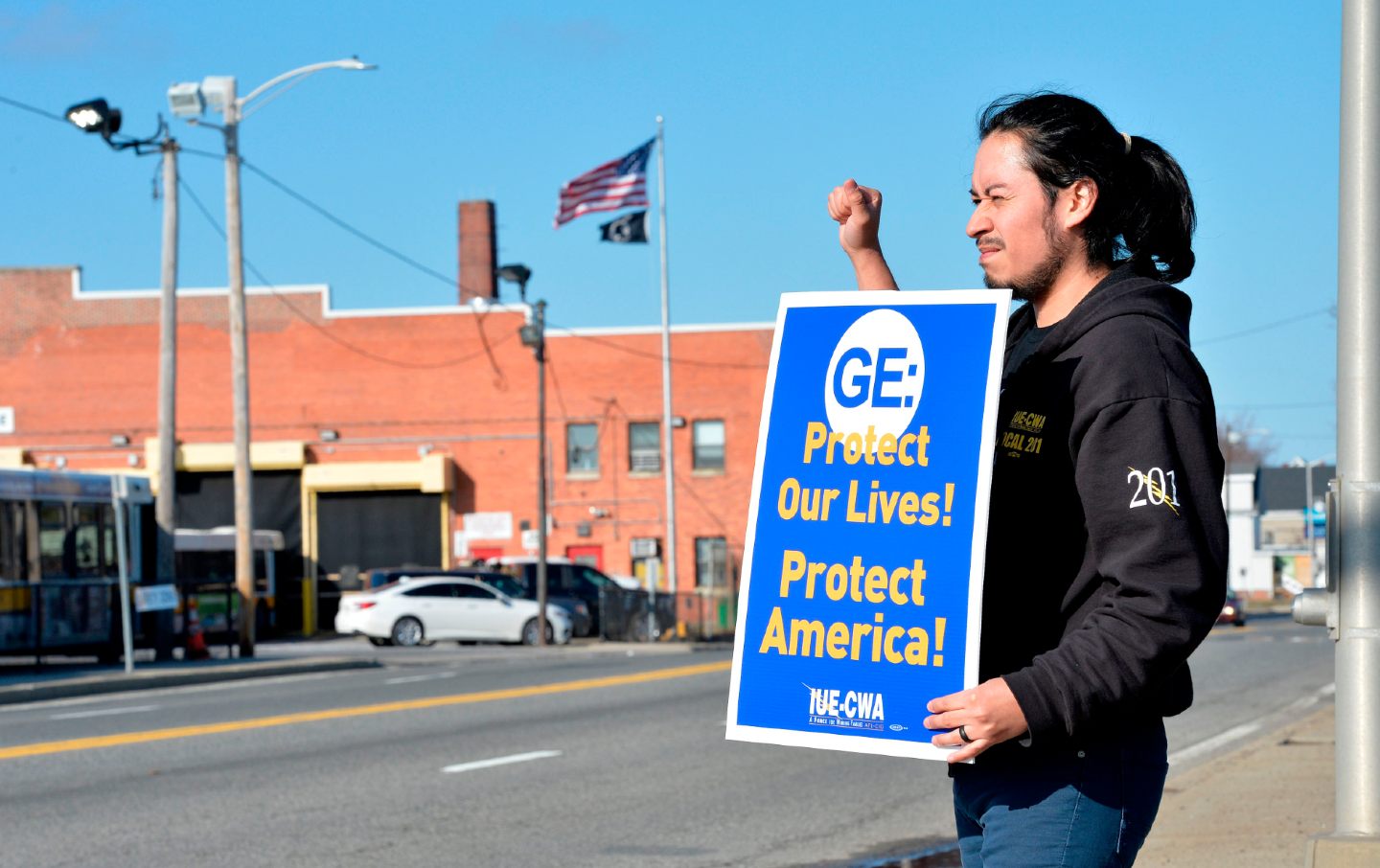 Most of the production at the GE plant in Lynn, Massachusetts, is “essential” defense work. Union members are required to work despite business closings and the “stay-at-home” order by Massachusetts Governor Charlie Baker. The sprawling factory is hard to clean. Machinists share equipment and sit at the same workbenches and use the same tools as the previous shift. Assemblers and benchhands and inspectors typically work next to one another. Everyone needs to access the same tool cribs and bathrooms. Even in this crisis, hand sanitizer runs out immediately, and union reps are constantly demanding more soap.

Members of Local 201 of the International Union of Electronic, Electrical, Salaried, Machine and Furniture Workers/Communications Workers of America (IUE-CWA) are proud of their work. It sometimes seems like every third person has a family member in the 10th Mountain Division. As work slowed on the commercial side of aviation, union members wanted to put their skills to work building ventilators. They watched desperate doctors and nurses getting sick and dying, begging for personal protective equipment and ventilators, knowing that the capacity to answer that need is in their own hands and skills. As Local 86004 President Jake Aguanaga in Arkansas City, Kansas, put it, “If GE trusts us to build, maintain, and test engines which go on a variety of aircraft where lives are at stake, why can’t they trust us to build ventilators?”

GE Aviation had already announced the layoff of 10 percent of the division workforce. GE Healthcare already produces ventilators, but rather than place new work in GE shops, the corporation struck a deal with GM and Ford instead. GE unions suspect that the corporation, in typical “disaster capitalism” fashion, will take advantage of the crisis to switch more production to nonunion locations.

On Friday, a second-shift worker reported to work at GE Lynn, even though two members of his household had tested positive for Covid-19. The company sent him home. But for workers who’d been complaining to plant management about unsafe working conditions, and who now had to worry about potential exposure, this was the last straw.

The area steward, Justin Richards, had been in direct contact with the affected member. “We have to preserve our health and safety,” he said. “The company has to at least put in some kind of protocol to clean and sanitize the building.” Richards has self-quarantined and has not seen his family since then.

For weeks, IUE-CWA Local 201 leaders had negotiated for additional paid time off for pandemic-related crises, such as a sick family member or a child care problem. Local management added some workstation cleaners and paid time off for those who tested positive—but ordered only 510 spray bottles for the entire plant. Management refused to budge on the other issues or to meet all CDC guidelines. The company insisted it would treat each worker on a “case-by-case” basis for paid time off. Verizon, Stop and Shop, and other employers were much more responsive to their employees’ needs.

Meanwhile, in the sharp class divide revealed across the country, Local 201 watched many in management work from the safety of their homes. They also noticed there are no billionaires delivering packages from the overwhelmed food banks, wearing secondhand masks in ICUs, or checking out food in grocery stores. Their jobs don’t kill them.

After their colleague was sent home, workers in Building 74 on the second shift gathered in the parking lot and chose not to work in “abnormally dangerous conditions for work,” opting to use their sick time. The union stated that this is protected activity (not a strike) under the National Labor Relations Act. The third shift followed suit. The national union, the International Union of Electrical Workers division of the Communications Workers, organized a national protest.

GE unions scrambled to find tactics suited to the crisis. Local 201 did a “stand-out” in front of the main Lynn gate on Western Avenue, where 25 members stood silently, 10 feet part, holding signs produced by the national union: “GE: Protect Our Lives. Protect America.” The union received widespread community support. Then the union organized a “social distance picket” at GE Corporate Headquarters in Boston.

When Local 201 members returned to work after the weekend, major changes had been implemented to improve safety. Areas were zoned off and floors marked to increase social distancing. High-traffic areas were marked “No Stopping No Standing.” New sanitation stations with cleanser and gloves appeared. A new cleaning solution that no longer corroded aircraft engine parts was distributed. Touchless scanners for punching in and out are coming. Workers with symptoms or underlying conditions can get extra paid time with a doctor’s note. The action and the press had an impact.

Transformative organizing in this period means defending your members and coming out stronger when this is over. As employers use the crisis to consolidate power and wealth, we need to build activism and organization. Five hundred and nine members individually signed on to a “group grievance” in Lynn to protest management’s lax health protections. The local’s text alert network has grown from 200 members to 612. The national union has organized a common front among GE local unions. Nonunion GE workers have reached out to the union shops when they saw that union workers have an organized voice to protect themselves.

According to Local 201 President Adam “Kaz” Kazinski, “It should never have come to this point. We feel proud about our members and their willingness to defend themselves. We are in a good position to keep fighting. There is more to be done.”