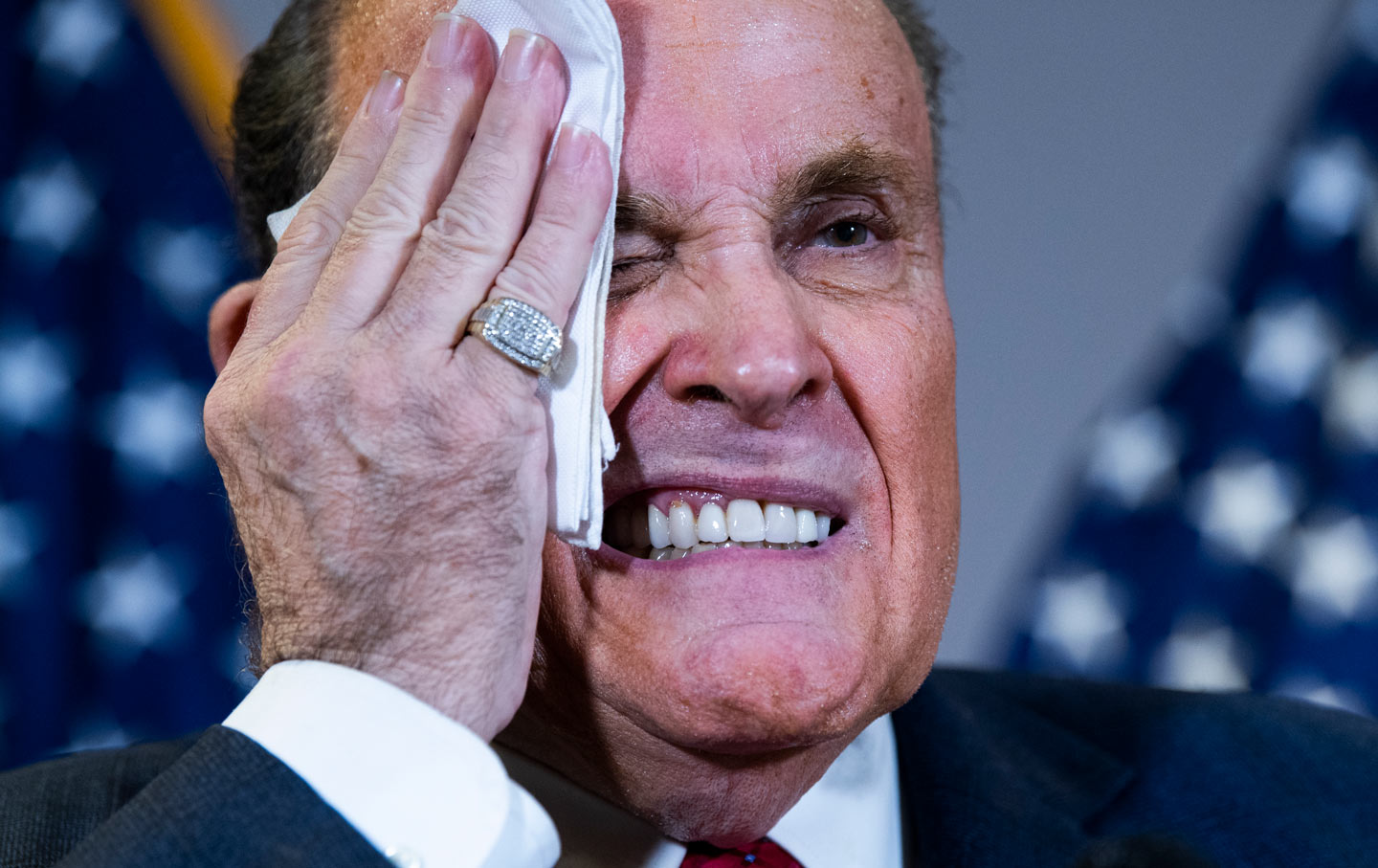 Federal Judge Matthew Brann dismissed Donald Trump’s over-the-top challenge to Pennsylvania’s election results with a withering rebuke to arguments made by the leader of defeated president’s legal team: “This claim, like Frankenstein’s Monster, has been haphazardly stitched together.” Then the judge, a former Republican Party operative whose biography identifies him as a member of the conservative Federalist Society, let rip.

Describing former New York mayor Rudy Giuliani’s proposal to disenfranchise 7 million Pennsylvania voters as “unhinged,” the judge for the US District Court for the Middle District of Pennsylvania wrote:

This court has been unable to find any case in which a plaintiff has sought such a drastic remedy in the contest of an election, in terms of the sheer volume of votes asked to be invalidated. One might expect that when seeking such a startling outcome, a plaintiff would come formidably armed with compelling legal arguments and factual proof of rampant corruption, such that this Court would have no option but to regrettably grant the proposed injunctive relief despite the impact it would have on such a large group of citizens.

That has not happened. Instead, this court has been presented with strained legal arguments without merit and speculative accusations, unpled in the operative complaint and unsupported by the evidence.

Judge Brand concluded, “In this case, the Trump campaign has not pled a cognizable theory.”

That was a damning assessment of a legal strategy that literally made no sense—except as a deliberate abuse of the courts to discredit the election that Giuliani’s client lost. “In his ruling, Brann delivered a repudiation of both the Trump campaign’s unsupported claims of widespread voter fraud and the lawyer who presented them in court: Giuliani,” observed a review of the ruling by The Philadelphia Inquirer, which continued:

The former mayor of New York, who is leading Trump’s national effort to challenge the election’s outcome, personally took charge of the case at a hearing in Williamsport last week and delivered a fevered, fumbling performance built on baffling conspiracy theories of a nationwide cabal of Democratic mayors working to rig the election for Biden that had little to do with what campaign lawyers had argued in their filings. He promised evidence. He didn’t deliver. He promised affidavits detailing fraud. There were none. And he vowed statistical analysis that would prove Trump had won the state in a landslide. Nothing of the sort was ever filed with the court.

If Trump really thought there was a case to be made for his allegations, he would immediately fire Giuliani. But at this point Trump is fighting on primarily to discredit free and fair elections, maintaining the pattern of antidemocratic behavior that has characterized his presidency. While attention in recent days has focused on battleground-state fights over recounts and the certification of results for Democrat Joe Biden—most recently, on Monday, in Michigan—the real story of Trump’s failed post-election strategy has been written in the courts. In state after state, dozens of legal challenges mounted by Giuliani and his team have been rejected on their merits—and with judges calling out the absurdity and irresponsibility of the attempted arguments.

Giuliani’s advocacy on behalf of Trump has been one long exercise in malpractice with malicious intent. And US Representative Bill Pascrell, a New Jersey Democrat who serves on the powerful House Ways and Means Committee, has had enough. In letters to legal bar authorities in Arizona, Michigan, Nevada, New York, and Pennsylvania, the congressman has sought the disbarment of Giuliani and 22 other lawyers representing Trump’s attempt to overturn election results. “We live together in extraordinary and increasingly dangerous national circumstances. At present, our sitting President has refused to accept the outcome of our national election and is attacking the integrity of our electoral system to keep himself in power,” writes Pascrell. “The pattern of behavior by these individuals to effectuate Mr. Trump’s sinister arson is a danger not just to our legal system but is also unprecedented in our national life. In carrying out that perversion, they have clearly violated the Rules of Professional Conduct they swore to uphold and should face the severest sanction your body can mete out: revocation of their law licensures.”

Pascrell’s letter to the State of New York Grievance Committee for the Second, Eleventh & Thirteenth Judicial Districts spells out concerns:

In his capacity as a public spokesman and attorney representing the presidential campaign of Donald Trump, Mr. Giuliani has participated in frivolous lawsuits and used our nation’s courts to assault public confidence in the United States electoral system, violating the New York Rules of Professional Conduct. Therefore, I request your office commence an immediate investigation of his actions and consider sanctions for his conduct up to and including revocation of Mr. Giuliani’s licenses to practice law in your jurisdiction.

Recounting the New York Rules of Professional Conduct for licensed attorneys, the congressman highlights concerns about possible violations of Rule of Professional Conduct 3.1, which requires that “[a] lawyer shall not bring or defend a proceeding, or assert or controvert an issue therein, unless there is a basis in law and fact for doing so that is not frivolous,” and Rule 8.4(c), which posits that it is professional misconduct for a lawyer “to engage in conduct involving dishonesty, fraud, deceit, or misrepresentation.”

Pascrell’s complaint is an appropriate one, as there must be a response to the clear abuse of the courts and of the democratic process. He explains:

As of today, President-elect Joe Biden has won the states of Arizona (by 10,457 votes, or 0.31 percent), Georgia (13,554 votes, or 0.27 percent), Michigan (by 154,187 votes, or 2.79 percent), Nevada (by 33,596 votes, or 2.39 percent), and Pennsylvania (81,487, or 1.18 percent) by margins virtually [certain not] to be reversed by any recounts. Despite the difficult circumstances of this pandemic, these states’ administration of their elections were strong and there is no evidence of systematic malfeasance or fraud in any of them. Nevertheless, Mr. Giuliani has participated in the filing a series of absurd lawsuits seeking to overturn the will of the voters in these states and has caused irreversible damage to public trust in the fair administration of our elections.