A protester carries a sign that reads “Defund The Police” during the Black Women Matter “Say Her Name” march on July 3, 2020 in Richmond, Virginia. (Eze Amos / Getty Images)

If Democrats want to hold onto control of the House and Senate in 2022, they should talk more about defunding the police, not less.

The video of Minneapolis police officer Derek Chauvin killing an unarmed George Floyd last May unleashed an international outcry against police brutality, a national racial reckoning about long-standing systemic racism in America, and a demand from the Black Lives Matter movement to “defund the police.” Coincidentally contemporaneous with Chauvin’s murder trial and the latest Minnesota shooting of an unarmed Black man, Daunte Wright, a growing chorus of voices is now saying that Democrats paid a political price for their proximity to that controversial slogan and should do everything they can to distance themselves from the demand if they want to prevail in future elections.

A deeper dive into the 2020 electoral data, however, shows that the greatest upside for Democrats in working to maintain their congressional majorities is to solidify their strength with the young people transforming the composition of the electorate and to do so by embracing progressive policy positions such as reforming the police.

The origin of the debate stems from the fact that Democrats lost several congressional races that they had hoped to win in 2020, reducing their majority in the House of Representatives by 12 seats and falling short in several US Senate contests. Assigning blame to the “defund” slogan began immediately after the November election when Democratic House members who’d only narrowly won reelection vented their anger about attack ads suggesting they were soft on crime. This point of view gained traction in December when former president Barack Obama criticized the phrase as a “snappy slogan,” adding, “You lost a big audience the minute you say it.”

And last month, multiple articles with wide reach have amplified the argument that the slogan proved to be political poison in the 2020 elections. Analyzing Trump’s surprising strength in some Latino areas, former Obama staffer David Shor stated in an interview with New York magazine, “We raised the salience of an ideologically charged issue that millions of nonwhite voters disagreed with us on.” As a result, Shor asserted, “conservative Hispanic voters who’d been voting for us despite their ideological inclinations started voting more like conservative whites.” Shor’s individual interview was then elevated and amplified when Obama retweeted the article to his 130 million Twitter followers.

In a similar vein, a recent New York Times column quoted several pollsters and strategists who maintained that there was a significant “defection of Hispanic voters” which can be attributed to a “cultural agenda” that “is driving a number of minority voters into the opposition party.”

These analyses misinterpret the big picture of what really happened in last year’s elections. To the extent that there was any erosion of support for Democrats among voters who had previously backed Clinton, those numbers represent a mere mathematical molehill compared to the mountain of conservative infrequent voters who turned out in extraordinary numbers to try to keep Trump in office.

While it is true that Trump did perform significantly better in some heavily Latino areas than he did in 2016, Democrats did not do worse. Biden received more votes than Hillary Clinton did in every single racial group. If Democrats were shedding large numbers of voters in key constituencies, how did Biden’s number go up, resulting in his receiving 3.6 million more Latino votes than Clinton?

Consider Hidalgo County, a 91 percent Latino county on the border of Texas and Mexico where Trump increased his share of the vote from 29 percent in 2016 to 41 percent in 2020. Despite the Democratic margin’s shrinking significantly, Biden nonetheless got 9,390 more votes than Clinton received four years earlier. An underappreciated story of the election was the surge of Trump voters, an increase of 41,885 in Hidalgo. Crystal Zermeno, data strategist for the Texas Organizing Project, recognized during the early voting period last October and warned at the time that Trump was turning out more of his infrequent voters than Biden was.

While deconstructing data from places where Democrats fell short can sometimes be helpful, the best way to understand how to win is to learn the lessons from the places where Democrats did, in fact, win. The shining example of Democratic success this past election occurred in Georgia where the party defeated the incumbent president, ousted two Republican senators, and scored its only pickup of a House seat formerly held by a Republican. Stacey Abrams and her campaign manager Lauren Groh-Wargo have written eloquently and at length about the ingredients of their success, but one piece of the picture that has not received nearly enough attention is the role of young people in the political transformation of Georgia and, by extension, America.

In the runoff elections that decided control of the Senate, Georgia’s 18-to-29-year-olds provided the margin of victory in those closely fought contests by giving Raphael Warnock and Jon Ossoff 67 percent of their votes, according to the exit polls. Biden’s defeat of Trump was similarly attributable to young people, 56 percent of whom backed him while Trump carried voters over the age of 44. The rising tide of increased youth turnout also lifted Carolyn Bourdeaux into the House of Representatives. Despite being attacked as wanting to defund the police, Bourdeaux nonetheless attracted 50,000 more votes than she did in her narrow 2018 loss, giving House Democrats their sole pickup of a Republican-held seat.

The strategic significance of this population is not just how progressive but how underutilized they are. Of all age groups, the lowest percentage of eligible voters who actually cast ballots is among 18–29-year-olds. Just 44 percent of all potential young people voted in Georgia last year, as compared to the 80 percent of the eligible voters over 45 who cast ballots.

Furthermore, the pool of young voters is growing each year as teenagers turn 18. By the time of the 2022 midterm elections, 8 million young people across the country, nearly half of them people of color, will become eligible to vote.

If the strategic electoral focus is on solidifying the support of that progressive and rapidly growing sector of the population, then the approach to issues of racial justice, in general, and Black Lives Matter and its demand to defund the police, in particular, should be the opposite of what is currently being counseled. While older Americans express greater ambivalence and anxiety about the concept of Black lives mattering, the under-30 crowd is far more enthusiastic and supportive. A Gallup poll last summer found that 70 percent of 18–34-year-olds supported “reducing the budgets of police departments and shifting the money to social programs,” more than twice the 32 percent level of support of those over 50. 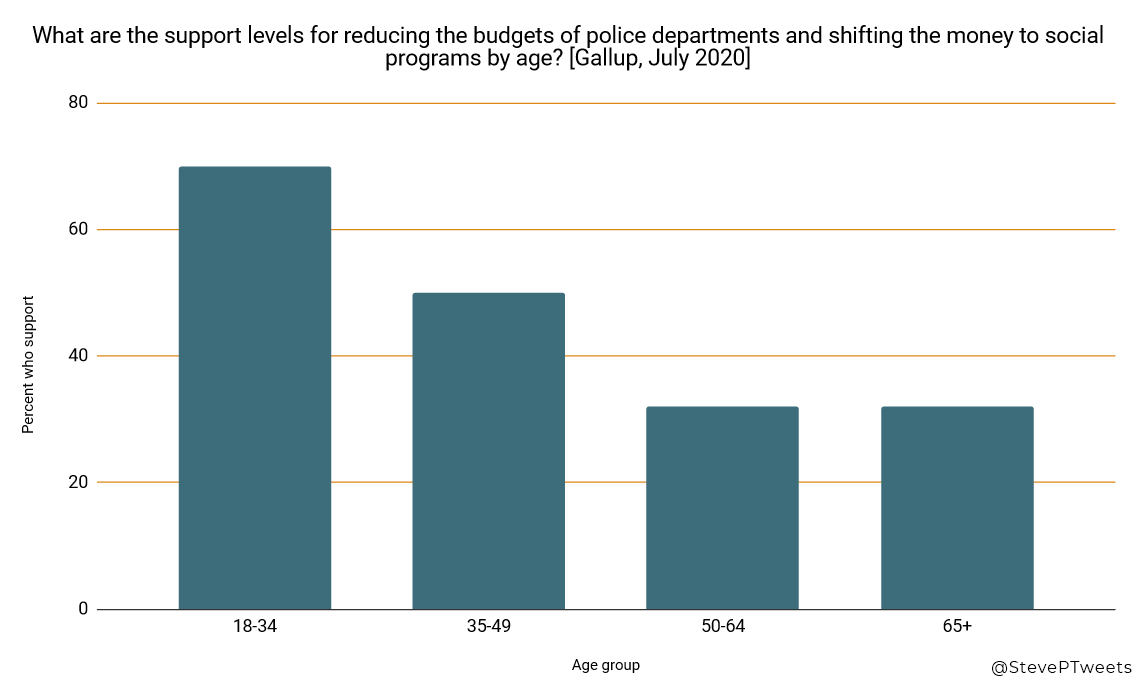 The data shows that Democrats need not succumb to the Faustian bargain of distancing themselves from the movement for racial justice in order to achieve electoral success. They don’t have to rest their political prospects on the hope that police officers will kill unarmed Black people only in non-election years. They can in fact retain both their values and enough votes to win. If Democrats double down on their advantage among young voters, they can have both justice for Floyd and a lasting majority in Congress.