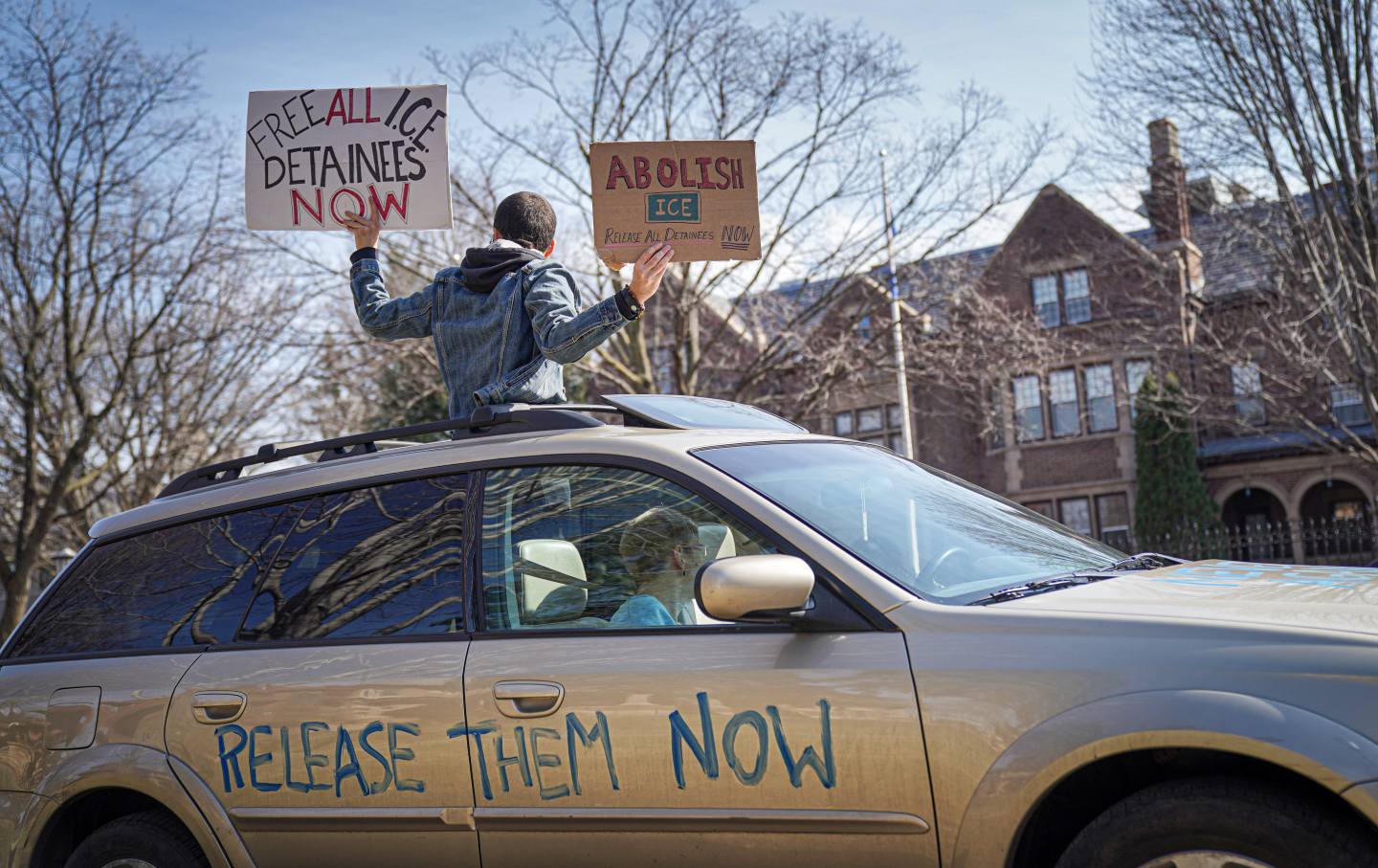 Activists outside the governor’s residence in St. Paul called for the release of high-risk prisoners and ICE detainees. (Glen Stubbe / Star Tribune via Getty Images)

This story is published as part of StudentNation’s “Vision 2020: Election Stories From the Next Generation,” reports from young journalists that center the concerns of diverse young voters. In this project, working with Dr. Sherri Williams, we recruited young journalists from different backgrounds to develop story ideas and reporting about their peers’ concerns ahead of the most important election of our lives. We’ll continue publishing two stories each week over the course of September.

When Quintez Brown was very young, his father was sentenced to prison.

Brown, now a first-generation college student studying political science at the University of Louisville, said that the insight he gained from his father’s experience of incarceration has influenced every political stance he takes. “I feel like a lot of people tend to dehumanize these populations,” he said. “I see him as a human being, as a person who deserves a second chance. He’s saying, ‘This isn’t fair; the system is messed up. Someone should do something about it.’ But guess what? I’m the only person really hearing him.”

According to the Bureau of Justice Statistics, 52 percent of state inmates and 63 percent of federal inmates are parents to dependent minors. An estimated 1.7 million children are in the care of incarcerated men and women, about 2.3 percent of the United States population under 18.

Incarcerated people and their relatives live the realities of a fraying criminal justice system. For them, a presidential candidate who prioritizes criminal justice reform is crucial. But they don’t see such a candidate emerging during the 2020 election. As November draws near, voters must choose between two candidates with contentious records on criminal justice.

In 2018, Trump signed the First Step Act into law, which prioritizes reentry efforts and incorporates a new release-consideration system that takes into account “personal growth” of inmates when considering early releases in nonviolent offenders. Despite the act’s bipartisan success, Trump’s past comments give criminal justice reformers like Brown pause. In a 2017 speech to a law enforcement group, Trump said that when dealing with gang members it’s OK not to protect their heads when putting them into a cop car. “Please don’t be too nice,” he said.

Trump spent $85,000 in 1989 for full-page national newspaper ads calling for the death penalty for the “Central Park Five,” five Black and Latino teens accused of raping and beating a white woman. Thirteen years later, they were exonerated by DNA evidence. Nevertheless, even 10 years after their innocence was proven by modern science, Trump refused to admit he had been wrong.

Moreover, during his time in office, Trump has helped prop up the private prison industry, with Attorney General Jeff Sessions revoking an initiative put forward by the Obama administration that sought to phase out the use of private contractors to run federal prisons, and his administration suing the state of California over its private prison ban.

But Joe Biden has a record that also causes voters interested in criminal justice reform to worry. Biden was a key player in the implementation of the War on Drugs in the 1980s and ’90s. The then–Senator of Delaware authored four notable laws that led to the present racial disparities in mass incarceration including the 1986 Anti-Drug Abuse Act, which created harsher sentences for the use of crack cocaine, which was much less expensive than the real thing.

Young voters like Brown, who is 19 and will be voting for the first time in November, are paying close attention to the candidates’ histories regarding criminal justice and how they plan to reform the country’s bloated prison system. They’re looking for a presidential candidate with plans to take on mass incarceration, cash bail, and the death penalty—and both candidates, they say, are lackluster in this regard. “The message we’re getting right now is, ‘Settle for me or get Trump.’ That’s the message that the DNC is giving us,” Brown said.

“I had a legitimate concern when it came to picking a candidate,” he said. “We have so many men and women that are locked up. We lead the world in incarceration. Those men and women should have had a platform that included a plan to help those people navigate their way back into society. Or that even addressed mass incarceration at the magnitude it is.”

This reticence, says Carrie Cole, a 23-year-old recent graduate of the University of Louisville’s Kent School of Social Work and part of Louisville’s Bail Project, is in part due to the tough position many candidates find themselves in: Presidential hopefuls tread a fine line between espousing progressive views and maintaining a tough-on-crime position, Cole said. “Maybe naively I hope that politicians care,” she said. “But I don’t think candidates are specifically saying, ‘This is an issue. This is what we should do to solve it.’ Because so many people and voters still opt for a ‘hard on crime’ mentality.”

Of the 12 Democratic candidates who made it to October of 2019, Senator Cory Booker was the most vocal on his policy plans for criminal justice reform. Booker cowrote bills like the Reverse Mass Incarceration Act, created to allocate $2 billion to prisons to cut their populations. He also championed a marijuana legalization bill that, if implemented, would drastically reduce the number of people who enter the criminal justice system: 43 percent of all drug arrests are for marijuana possession, with black people nearly four times more likely to be arrested than white people.

When Booker dropped out of the race, Parker felt that was a signal that other voters didn’t prioritize criminal justice policy when considering a candidate. Like Cole, Parker says the lack of candidates’ interest on the issue seems to be intentional. “In a world where all people were held equal, there would be comprehensive approaches from every direction aimed at addressing the injustices of incarceration,” Parker said. “It’s not what we see, though, because people are still fearful of this population. It’s not politically savvy to support [those incarcerated].”

Not only that, many formerly incarcerated people are frequently overlooked by politicians because they are unable to vote—31 states disenfranchise, or otherwise bar people with criminal records from voting.

Despite a wave of initiatives against mass incarceration, Republicans and Democrats alike still support heavy punitive action against violent crime. According to a 2016 Vox poll, although many voters supported ending mass incarceration by halting and shortening sentences for nonviolent crimes, 60 percent of all voters opposed releasing or cutting sentences of those who were convicted of violent crimes—even if they showed signs of rehabilitation.

But that mindset could change, Brown said, noting that Covid-19 prompted a wave of early releases this year. Injustices seemingly baked into the system can be quickly changed when politicians feel it is important, he said: It took only weeks for state-level politicians to alter their stances on nonviolent offenders.

Jackie Lantsman, a 22-year-old intern for the Center for Budget and Policy Priorities, a nonprofit that writes progressive policy for criminal justice reform, said that it’s time young people’s concerns get more attention from politicians. “I don’t think who politicians pander to when they’re trying to garner votes is very representative. Statistically, they claim that older folks are more prone to vote, they’re more reliable, and that is why they focus on them. That is a myth,” Lantsman said. “I think if you really confront gerrymandering and places where young people learn and socialize, then there are absolutely ways to engage them.”

Voters like Brown and Cole are also optimistic, anticipating a more compassionate outlook for those affected by the criminal justice system. Reform is on the horizon, they say, thanks to the increased knowledge of young voters exposed to online movements like Black Lives Matter. For now, Brown, Cole, and Lantsman hope for a future that prioritizes criminal justice reform as an issue—one that impacts all citizens.

“Now I think more people are realizing that ‘tough on crime’ was racial and immoral,” Brown said. “We have that knowledge of those ideologies’ being political games.”