St. Louis is home to a pair of the biggest coal companies on the planet, massive coal ash deposits, asthma that affects Black children far more than white children, and a landfill full of nuclear waste that could catch fire.

For these reasons and more, voters of Missouri’s first district renominated Representative Cori Bush to the Democratic ticket, nearly guaranteeing her a second term in office in a deep-blue district representing most of St. Louis. Bush will go back to Washington with a climate bill specially designed to finance urban environmental cleanup and decarbonization, the Green New Deals for Cities Act of 2021 (HR 2644).

“It’s the people who put our pressure on our politicians,” Bush told The Nation. “The voters, the people, and the local governments need to know that this funding can be available.”

Cosponsored by Democratic Representative Alexandria Ocasio-Cortez, HR 2644 would distribute $1 trillion directly to cities, towns, and Native American tribes over a period of four years, bypassing conservative state legislatures to empower local governments. “St. Louis has been in need of more investment for such a long time,” the congresswoman said. “We see it in other cities, too, like Flint, and now Jackson,” all of which now share a catastrophic drinking water crisis. “We know our walls are full of lead paint. Black children are hospitalized with asthma with 10 times the frequency as white children.” 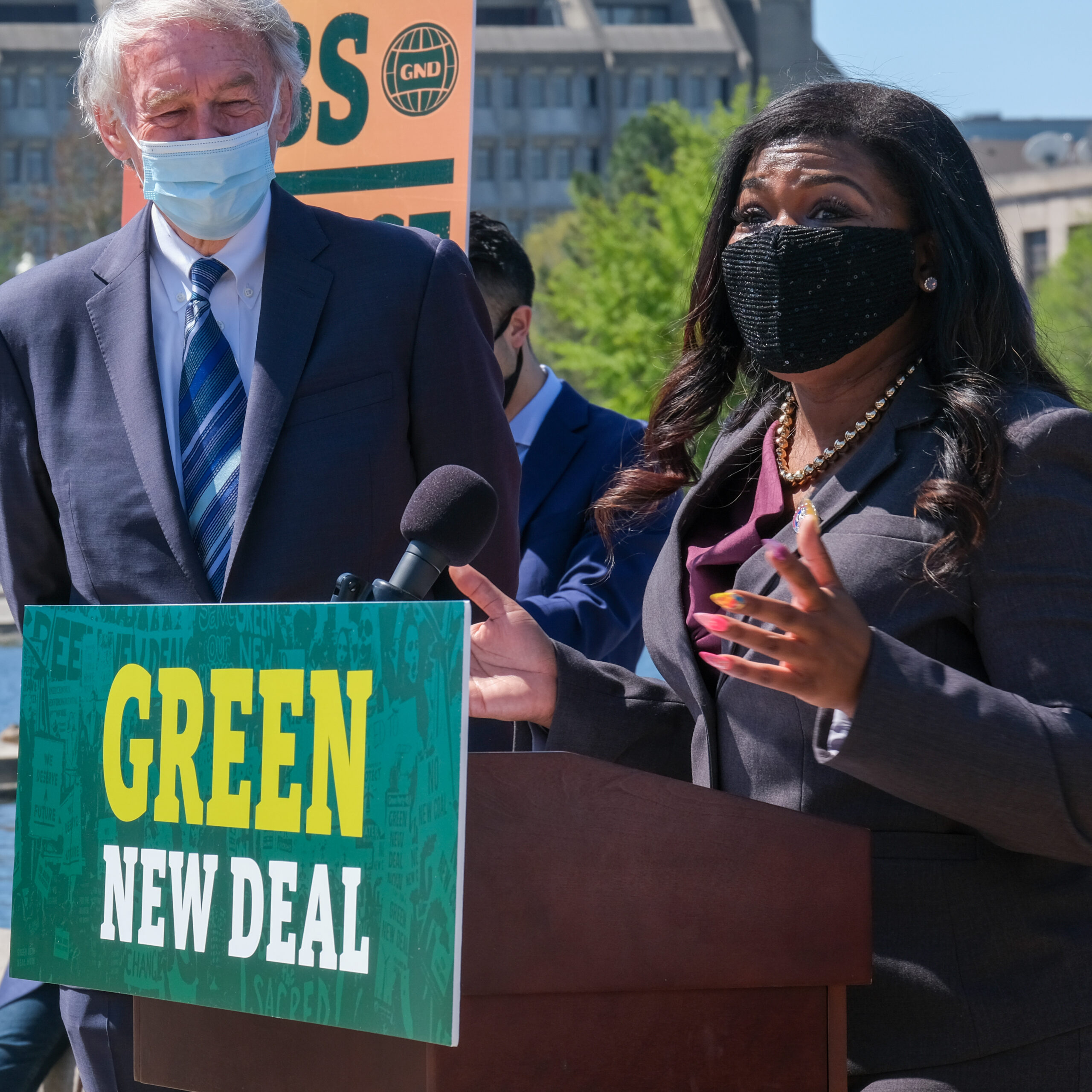 Of 72 cities surveyed by the Equity Indicators Project, which measures racial disparities in areas like health care, education, and employment, St. Louis was the lowest-scoring city for asthma-related health problems. Dust and mold in housing are serious contributors, but so is poverty, which puts adequate health care out of reach.

These systemic issues are only made worse by extreme weather events occasioned by climate change, which are already wreaking havoc on decrepit US infrastructure. In July 2022, St. Louis experienced a one-in-a-thousand-years flooding event. Roughly 25 percent of the area’s normal yearly rainfall fell in about 12 hours. Bush said, “Homes were flooded, people lost vehicles and became displaced. That’s happened in Georgia, and in Rhode Island too. And in Jackson, Mississippi, a predominantly Black community has no access to clean water. This isn’t happening in a community that’s affluent.”

With 46 politicians signed on, including Representatives Ayanna Pressley and Jim McGovern, the Green New Deals for Cities Act is meant to be a broad, flexible, revenue-sharing model. It is based on crisis legislation like the Heroes Act, which was designed to get coronavirus aid to frontline communities. Bush argues that cities should receive funding for the climate crisis just like they received funding for Covid. “There have been 11 more 90-degree days [per year on average] than when I was born,” she said. “This is documented, this is researched, and we need this direct investment.”

The bill also supports reparations programs for Black and Indigenous communities to remediate historical environmental injustices, but the details of that aspect of the program are not yet defined.

“Democrats have delivered a lot of investment,” Bush said, speaking of President Biden’s Build Back Better legislation. “I think we need a lot more. We have to continue to act deliberately and creatively. My GND for Cities bill does that. This bill makes the focus local.”

And there are many local issues in St. Louis. About 70 percent of Missouri’s energy comes from coal burned in fire plants. Arch Coal and Peabody Coal (now Arch Resources, and Peabody Energy) have their headquarters in the city. As of 2020, the state spends $870 million importing coal via rail each year, down from $1.13 billion in 2008. That revenue network props up conservative, obstructionist Democratic senators like Joe Manchin in West Virginia.

Mining strategies like mountaintop removal contribute to apocalyptic environmental issues in Appalachian districts under Manchin’s leadership, and coal is wildly inefficient, dirty beyond comprehension, and a massive emitter of carbon—not to mention that it can remain extremely hazardous long after it’s burned.

Every coal fire plant produces millions of tons of coal ash and slag every year. These byproducts contain mercury, cadmium, and arsenic. An amount of radioactive fly ash is allowed into the air. In Missouri, regulators explicitly allow coal ash pollution in the St. Louis–area water supply.

Some waste from coal fire plants can be repackaged and sold, but what’s left over is often buried in unlined ash pits. On a warming planet, this creates a monumental threat to food and water systems.

Floods and heavy rain cause rising Missouri water tables to seep into ash pits, contaminating the groundwater. According to the Missouri Independent, “A study from the Environmental Integrity Project shows 91 percent of coal plants have unsafe levels of one or more coal ash toxins in groundwater on or around the property.”

Democracy Is on the Ballot in 2022. Summer Lee Is Ready for This Fight.

There are 25 unlined ash ponds in the state. The Labadie Power Plant and the Rush Island Power Plant, both run by Ameren Electric, are only a few miles away from the Missouri and Mississippi rivers.

“When we look at the coal-burning power plants in Missouri,” said Bush, “all of which are leaking, and we look at all the things in that runoff, like arsenic, there’s no doubt. We know how it affects the nervous system; it causes heart and kidney polyps. We look at the fact that these sites don’t comply with federal regulation. They need to hear our voices. The fossil fuel industry has had an especially powerful grip on Missouri.”

Because of Representative Bush’s testimony, the Government Accountability Office is evaluating a historic hazardous waste cleanup project completely separate from coal, but similarly exacerbated by flooding.

In the 1950s, Mallinckrodt refined uranium for the Manhattan Project in St. Louis. In North St. Louis, there is a Superfund site called Coldwater Creek. In December 1989, radioactive material was proven to have contaminated the water from a dump site upstream, near Lambert Airport. The radioactive waste was haphazardly barreled and discarded by Mallinckrodt.

Between 2008 and 2011, graduates of nearby McCluer North High School noticed an unusual concentration of cancers, birth defects, and other illnesses affecting their cohort. In August 2015, the United States Army Corps of Engineers admitted that it found excess amounts of thorium-230, a uranium decay product, in the creek.

Thorium-230 has a half-life of 75,380 years, and Coldwater Creek has always flooded regularly into local neighborhood gardens, backyards, and public school playgrounds. The congresswoman’s own house was close enough for her basement to be flooded by potentially contaminated flood water.

It doesn’t get better from there. During the cleanup, the creek and original dump site were excavated, and much of the radioactive material was transferred to the West Lake Landfill, which is now in extreme danger of catching on fire.

The West Lake and the Bridgeton landfills sit side by side in the same complex of disposal areas. While West Lake contains World War II–era radioactive waste, the Bridgeton site has been dealing with an exothermic reaction that first occurred in 2010 and continues to smolder: Essentially, an underground fire threatens to spread to West Lake, which would send radioactive ash into the air for miles around, depending on wind direction and containment.

Emergency response plans have been issued and notices have gone out to nearby residents, but the fact that a fire is burning so close to radioactive waste has alarmed local advocacy groups like Just Moms STL for years. Residents who live downwind from the hazardous material have long tried to make this a public issue, and as Ray Hartmann wrote for Riverfront Times, “The same authorities who say they were blindsided by the latest discovery of waste are some of the same ones who have assured residents that the waste won’t catch fire.”

Bush has long been committed to the efforts of Just Moms STL. One of the biggest obstacles to environmental cleanup can be in the cost of testing materials and soil samples, which would be funded by the GND for Cities, among other solutions.

One of the bill’s premises is that nuclear-powered carbon-capture technology is a false solution for ecological investment. Bush is not opposed to atomic power outside the bill, but for the GND for Cities, nuclear energy is excluded.

The bill’s flexibility is its biggest advantage. For example, while cars dominate St. Louis, some of the biggest carbon emitters are the city’s poorly insulated buildings, which rely on coal or fossil gas. Installing solar panels and heat pumps would greatly reduce carbon output, but another community in a different climate zone may find that bike lanes and public transit upgrades are more crucial. The GND for Cities makes local need the key.

The biggest obstacle of the so-called Squad has been getting the message to translate outside of deep-blue districts. Bush is focused on new allies, like New York Representative Jamaal Bowman. “The goal is to continue to grow. And to continue to push for the things our community needs. We’re pushing for robust investment.”

The Green New Deals for Cities is another expression of Bush’s campaign slogan: “Doing the most for the people who have the least.”