The Veiled Prophet as illustrated in an 1878 edition of the Missouri Republican. (Public Domain)

After 140 years, 2021 might be the end of the Veiled Prophet in public life. For 40 years, St. Louisans have celebrated the Fourth of July downtown at the VP Fair (renamed Fair St. Louis in 1992.) The accompanying Veiled Prophet parade, in which a daughter of a local aristocrat rides in a float alongside a man whose identity is obscured by an elaborate veiled headdress, has been a staple of summer in St. Louis for generations. But after a year of protest against police violence and systemic racism, as well as some massive shifts in local politics, with the election of a new progressive Mayor Tishaura Jones earlier this year as well as the newest Squad member Cori Bush to Congress in 2020, the Veiled Prophet has finally lost its unearned place in public life.

This year, the Veiled Prophet Parade got new branding. It was renamed “America’s Birthday Parade,” and all references to the“VP” were hastily scrubbed from the logo. Still, Tishaura Jones became the first mayor to skip the parade in 90 years. 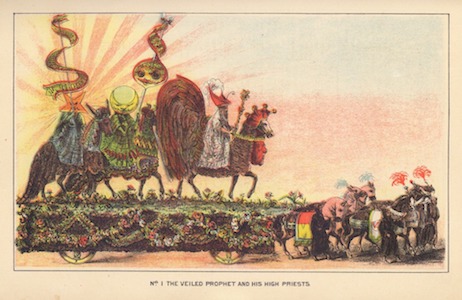 "The Veiled Prophet and his High Priests" on a plate from the 1883 Autumnal Festival. (Missouri Historical Society)

As the unelected mascot of St. Louis, the Veiled Prophet is a kind of Mardi Gras character—the divine figurehead of an exclusive men’s club for St. Louis’s ultrarich. He’s been the target of protest since the 1960s, but, because this symbol is so old, the meaning of the Veiled Prophet still gets confused, and many are quick to explain away the more sinister details.

In June 2021, the Internet blew up over the allegation that actress Ellie Kemper was a “KKK Queen.” A St. Louis Post-Dispatch article on the actress’s 1999 Queenship surfaced, and the cancellation torches came out. Once a year, the secretive Veiled Prophet Society crowns a teen debutante at its royal ball, and Kemper—heir to the Commerce Bank fortune—sat on a throne beside the Klan-ish king as his Queen of Love and Beauty. In the old days, queenship made you a local celebrity, and many daughters of the bourgeoisie considered it an honor to ride in the parade beside the white-gloved man in a veil. But Kemper apologized for her participation in an Instagram post: “Hi guys—when I was 19 years old, I decided to participate in a debutante ball in my hometown. The century-old organization that hosted the debutante ball had an unquestionably racist, sexist, and elitist past.” 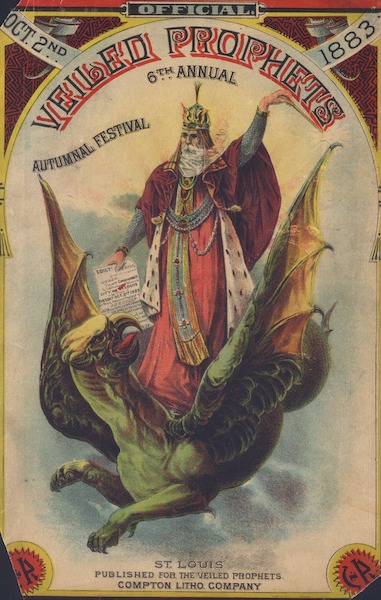 When the VP is in the news, many ask a good question: “Is the Veiled Prophet really a Klansmen?” He’s eerie like a Klansmen; he wears robes like a Klansmen; he’s covering his face just like a Klansmen… yet he doesn’t have a steepled hat, and his robes are glittery, not white. Many outlets in June 2021 reported that “the Veiled Prophet organization did not have ties to the Ku Klux Klan,” or claimed, “It’s not a KKK thing.” This wildly misunderstands the history of the Klan in America. In fact, the first Veiled Prophet Parade was held to mark a violent anniversary: the crushing of the largest worker’s strike in St. Louis history—a movement that demanded fair wages, an eight-hour workday, and the end of child labor.

Trolley workers were big participants in the Great Railroad Strike of 1877, as it moved from East to West, from Philadelphia down the rail lines to Pittsburgh, and way out to hit St. Louis, washing through the streets, sending every brakeman, engineer, smithy, and barge worker into the streets for massive strike parades. For a week, Black and white workers shut the city down—no trains left the relay depot; no barge left the wharf. The St. Louis rich panicked. Worried that the strikers would shut off water to their mansion neighborhoods, they filled their sinks and bathtubs. In The Great Labor Uprising of 1877, Philip S. Foner argues that St. Louis workers became the de facto government for a short period, founding the first American commune government.

One year later, the average citizen would have been well aware of what the Veiled Prophet stood for, and of his close connection to the early KKK. Costumed figures like the VP were newspaper celebrities for over a decade—nightriders dressed like wizards, moon men, or the ghosts of Shiloh. The average trolley operator surely would have recognized the Veiled Prophet as the guy who threatened to shoot his way through a streetcar strike.

The first mysterious “Veiled Prophet Parade” was hyped in the newspapers. It took place at nighttime, winding through working-class neighborhoods while residents watched under the glow of gaslights. This was odd for 1878—a parade this expensive would usually march through the city’s power centers. In The St. Louis Veiled Prophet Celebration, Power on Parade, Thomas Spencer argues that the goal of the VP Society has always been to “educate” its working-class audience. Parades of this time were media tools meant to show immigrants and working people (often illiterate) what it means to be “American.” Later, the parade was moved to July 4, but that autumn of 1878, the proletariat of St. Louis watched as the main event was carted past by a team of horses; the VP’s tableau pulled along as gunpowder fireworks exploded. The VP stood in the torchlight beside a man in a black butcher’s hood. This other man is a “villainous looking executioner,” as Spencer points out. The message was clear: You are down there; the Veiled Prophet is up here. 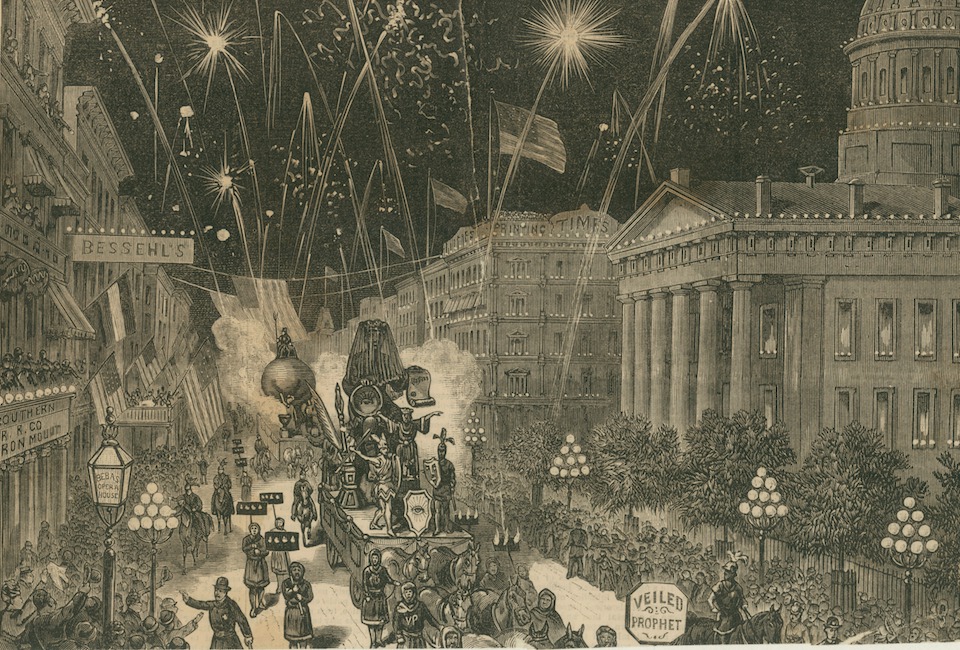 While the Veiled Prophet of Khorassan comes from a character from Thomas Moore’s Lalla Rookh—an evil villain of the Orient (much like Jaffar from Aladdin)—he’s deployed in the context of a decade of heinous Ku Klux Klan violence. Trolley operators, coopers, dock workers, train engineers, and the exploited immigrant classes would have known the Veiled Prophet was a KKK symbol—anti-Black, anti-North, anti-worker.

The KKK of the 1920s was a completely different movement from the Ku Kluxers of the 1860s, but the Veiled Prophet costume is the costume of a Klansmen. The origins and function of the VP are nearly indistinguishable from those of the early KKK, especially since costuming played such an important role in broadcasting authoritarian messages through the mass media of the time—papers and parades.

This has been obvious to the Black community in St. Louis since the beginning. Percy Green has been fighting the Veiled Prophet since the 1960s. Green climbed the Gateway Arch during its construction to protest the all-white construction crew, won a seminal Supreme Court case against McDonnell Douglas for employment discrimination, founded the guerrilla theatre protest group Action Committee to Improve Opportunities for Negroes (ACTION), and fought for working people in the St. Louis’ Black community all his life. In 1972, ACTION member Gena Scott unveiled the VP in a protest meant to push the debutante celebration from the publicly funded Keil Center. In a dramatic reveal, Scott swung down from the rafters onto the stage to pull the veil off the prophet. It was Tom K. Smith, vice president of Monsanto. 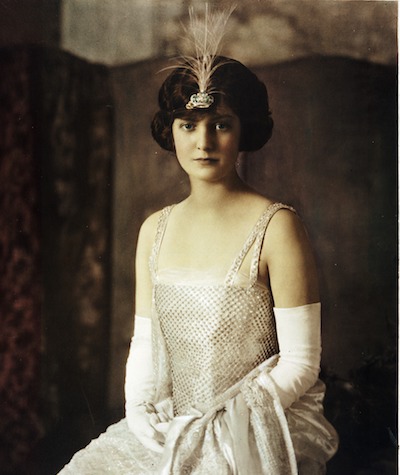 Unveiling the prophet, she unveiled the truth about the secret society and its role in St. Louis. Black St. Louisans have always borne the harshest conditions of capitalism, while the white ruling class celebrated themselves and the wealth they accumulated by terrorizing and exploiting their fellow citizens. In their secret rituals of power, they crown one of their daughters the Queen of Love and Beauty, while half the city has their generational wealth wiped off the slates every decade.

The Veiled Prophet Society’s public relations team has the hardest job in the Midwest. It is very difficult to project benevolence when your organization has a Klansmen for a mascot and a stark history of violent racism. But they tried. This year, in the VP’s place, a cartoon eagle named Archibald—“Archie” for short—took up the center of the parade.

In June 2021, the event coordinators decided that neither the Veiled Prophet nor the Queen of Love and Beauty would appear in this year’s celebration. Except for the marching band’s tuba covers and a crew of young men in yellow VP shirts breaking down tents at the end of the parade, “VP” was removed from this year’s celebration.

With the Veiled Prophet uninvited to this year’s Fourth of July celebration, Percy Green and St. Louis civil rights activists can cross another Confederate monument off the list. But it’s a small victory compared to the fights local organizers have undertaken in recent years—from closing the infamous “Workhouse” jail downtown to sending an unapologetically radical organizer from the Ferguson protests to Congress. The best and bravest—from Jamala Rogers to Kayla Reed—are still fighting for working people and people of color in St. Louis. The question is, will the political and economic order that the Veiled Prophet represents be dismantled? Will justice be constructed in its place? I hope so, but the network of power which the veil represents is still there.

Will I embrace the VP replacement, Archie? Will I high-five the nationalistic eagle replacement mascot? Never.