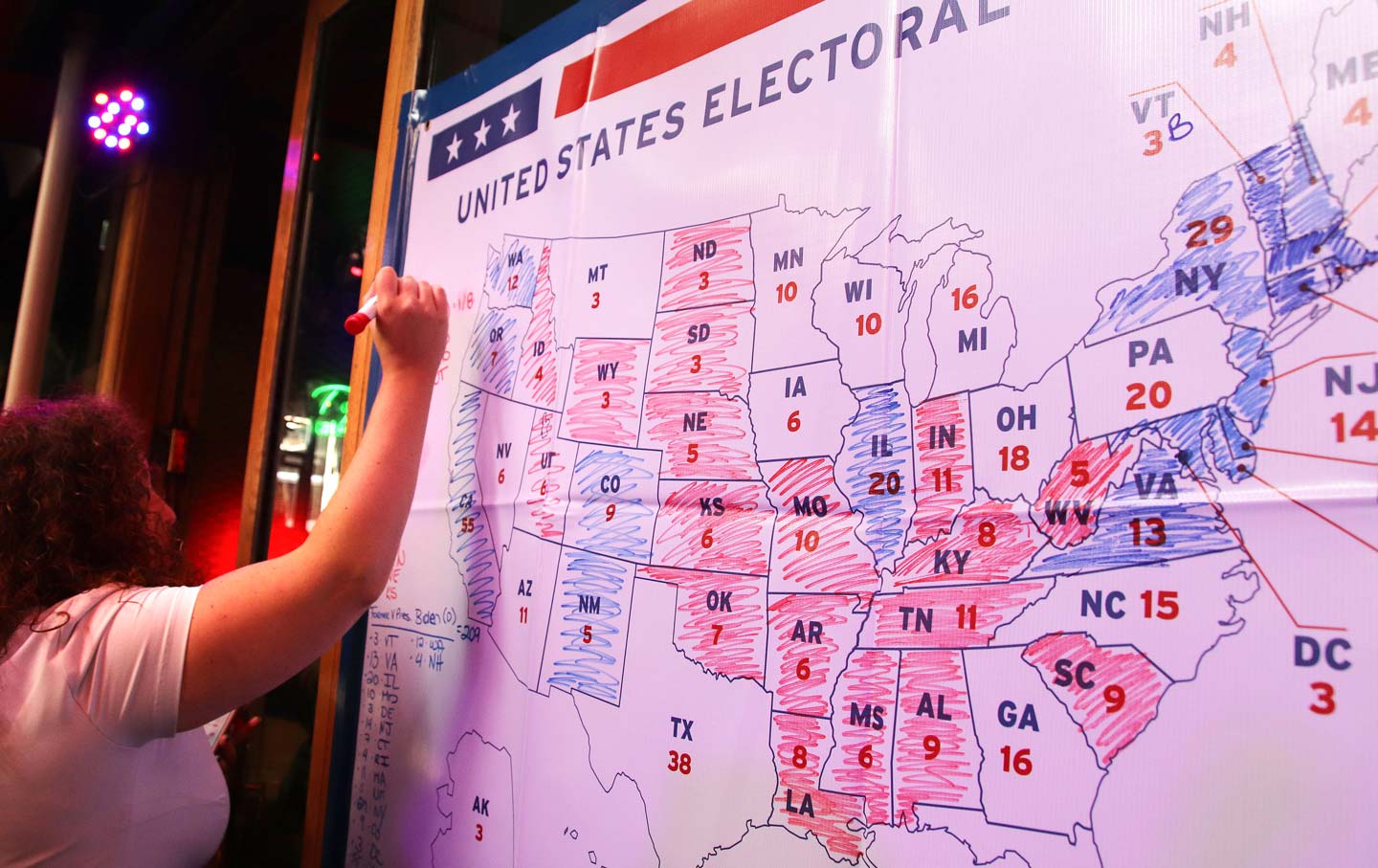 On Wednesday morning, Joe Biden swept past the 50 percent mark of total ballots counted thus far in the presidential election. By mid-afternoon on Wednesday, the Democratic candidate was leading Donald Trump by 3 million votes, and the margin expanded with each passing hour. In most countries, a popular-vote lead of that size would have put a candidate’s supporters’ minds at ease, but not in the United States. Even as Biden’s popular-vote lead was expanding, “battleground state”–obsessed television networks were still describing the contest as “too close to call,” and Trump was claiming—falsely, by every measure—that he had “won.”

For too many of our pundits, the work of assessing presidential election results begins and ends with the tabulation of Electoral College votes.

To his credit, Biden recognized the legitimizing power of the popular-vote numbers, mentioning them in late Wednesday afternoon remarks to the nation. “Of special significance to me is that we won the majority of the American people,” he said. “Every indication is that this majority will grow.”

Biden explained that he was not yet prepared to claim victory. But Maurice Mitchell, the national director of the Working Families Party, looked at the data and argued:

When all the votes are counted, I believe it will be clear that the people have chosen Joe Biden to be the next president of the United States. Americans turned out in record numbers, braving a global pandemic and voter suppression. It is already clear that Trump has been soundly rejected by a majority of voters—by a margin of millions that is still growing. And when every vote is counted, it will also be clear that Joe Biden has won the presidency and Donald Trump has lost.

Mitchell’s review is a sound one. In addition to securing a popular-vote win, Biden has a clearer route than Trump to an Electoral College win and the presidency. But it remains a circuitous route that could take days or even weeks to complete; and that is likely to include recounts, court fights, and all the chaos that Trump promised in his preelection threats to reject any results that did not afford him another four years as grifter in chief.

It is no secret to anyone who has been paying attention to recent election cycles that the specter of chaos is all-but-guaranteed by the Electoral College, an archaic remnant that lingers from the time when wealthy white slaveholders put the clampdown on democracy for both their time and ours. Twice in 20 years, the august body has prevented the winner of the popular vote from assuming the presidency (in 2000 and in 2016), and now, even with Biden’s commanding popular-vote lead, his score in the Electoral College could see him winning by a narrow margin. If that is the case, it will make his efforts to unite the country and govern in a time of crisis dramatically more difficult.

Defenders of this country’s convoluted method of choosing presidents, which was developed at a time when the overwhelming majority of Americans were not allowed to vote, still claim that it contributes to stability. Wrong! It is the source of our current instability.

Biden had, by midday Wednesday, already won more than 70 million votes—the highest figure ever for a presidential candidate. And that number could well grow to 75 million or more. Trump will get a lot of votes, but Biden will get a lot more, as millions of additional ballots are counted in California and the other high-turnout West Coast states that solidly favor the former vice president.

Yet, for the next many days, we will be concerning ourselves with the question of whether Biden’s 21,000-vote lead in Wisconsin can withstand a recount demand from Trump, whether Biden’s lead in Michigan will extend sufficiently to thwart talk of a review, whether Pennsylvania’s long count will be disrupted by legal challenges before it can reveal a Biden win. Then there’s the wrangling over Arizona, Nevada, and perhaps Georgia.

None of this would ever have to happen again if we simply abolished the Electoral College. Of course, this is not a simple project. But even if we don’t get around to abolishing the institution immediately, we should work on abolishing the Electoral College mentality that so frequently undermines honest consideration of signals sent by the electorate. That mentality infects the political and media elites who guard the doorways of democracy and spin fantasies about who we are and what our country might be.

Before the 2020 election, polls consistently showed Trump trailing Biden, which stood to reason. Trump has been a horrible president, who has sought to divide and conquer this country with racist and xenophobic rhetoric, who has denied the reality of the climate crisis and the insanity of the ever-expanding Pentagon budgets that fund a bloated military-industrial complex, and who has deliberately failed to respond to the coronavirus pandemic and the mass unemployment that extends from it.

Trump’s track record demanded a rebuke by the electorate, and polls seemed to suggest it was coming. Yet on Election Night all we heard was “too close to call” and “the polls were wrong.” And to be sure, plenty of polls were wrong—especially in the battleground states—but the national polls that showed Biden with a substantial lead weren’t that far off. The final average of late-in-the-campaign polls by Real Clear Politics had Biden with 51.2 percent of the vote to 44 percent for Trump. As I write this, Biden’s already at 50.2 percent of the popular vote. That number will rise to 51.2 percent and keep right on rising. Trump’s at 48.2 percent, and his numbers are likely to fall—nationally and in the battleground states—as more votes are tabulated.

So Trump was rebuked—not sufficiently, but substantially. Unfortunately, the Electoral College mentality does not afford us the space we need to speak the truth about the rebuke—let alone to act upon it. That mentality frames a lie that suggests Trump is more popular than he has ever been.

The fact is that Trump is not popular. He lost the 2016 election to Hillary Clinton by 2.9 million votes. He has already lost the 2020 election by a wider margin—and that margin just keeps growing.