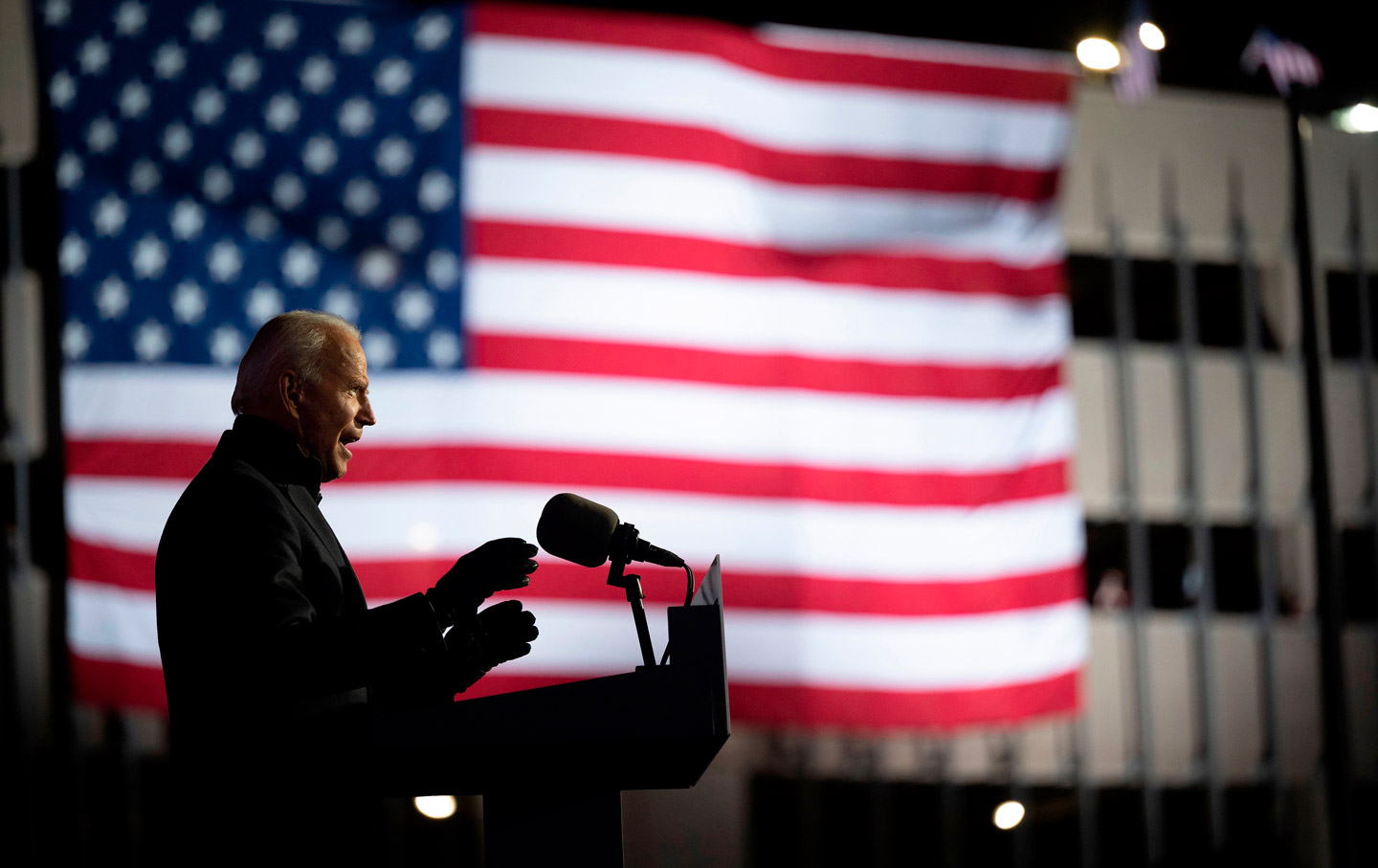 On a night of close contests and inconclusive results in the most bitterly contested presidential contest of the modern era, Joe Biden spoke to his supporters and counseled, “We’re gonna to have to be patient until the hard work of tallying votes is finished. It ain’t over till every vote is counted, every ballot is counted.”

While Trump made a false claim of victory based on incomplete returns, the former vice president spoke shortly after midnight to encourage supporters to “keep the faith.” Trump was running better than preelection polls had predicted. But the count was far from finished in key battleground states; the race was too close to call.

Around the time that Biden spoke, he led the popular vote by roughly 1.5 million ballots, though that margin was sure to grow as the count continued in West Coast states that he was winning by overwhelming margins. The Democrat was ahead 223-174 in the Electoral College race, and he scoped out a scenario where he could secure the undecided states of Michigan, Pennsylvania, and Wisconsin and take the presidency away from Trump. But at the end of the night, he was not on the way to the landslide victory that the most optimistic of his supporters had imagined possible.

One state Trump won in 2016, Arizona, and one congressional district, Nebraska’s 2nd, were trending toward Biden when the former vice president spoke. But Democratic hopes for victories in Florida, North Carolina, Ohio, and Texas—states Trump won in 2016—faded as the long night unfolded. And Trump was leading in the three Great Lakes battlegrounds where he narrowly prevailed in 2016. Only hours later, on the cusp of dawn, would the counting of absentee ballots from industrial cities tip the balance toward the Democrat in Wisconsin and Michigan and reveal that Pennsylvania was very much in play.

When Biden spoke around midnight, Democrats were wrestling with the daunting prospect of a second Trump term. And Trump was feeding into the waking nightmare.

Shortly after midnight on the East Coast, the president tweeted, “I will be making a statement tonight. A big WIN!” And he displayed the desperate dishonesty that Democrats feared: “We are up BIG, but they are trying to STEAL the Election. We will never let them do it. Votes cannot be cast after the Polls are closed!” Twitter flagged the statement with a warning: “Some or all of the content shared in this Tweet is disputed and might be misleading about an election or other civic process.”

But a Twitter warning was insufficient to counter fiction peddled via social media and from the White House bully pulpit where Trump would, in the wee hours of the morning, assert that “we already have won,” claim victories in states where ballots were still being counted, threaten to seek an intervention by his allies on the US Supreme Court, and foster the fantasy that “a very sad group of people is trying to disenfranchise [his supporters] and we won’t stand for it.” 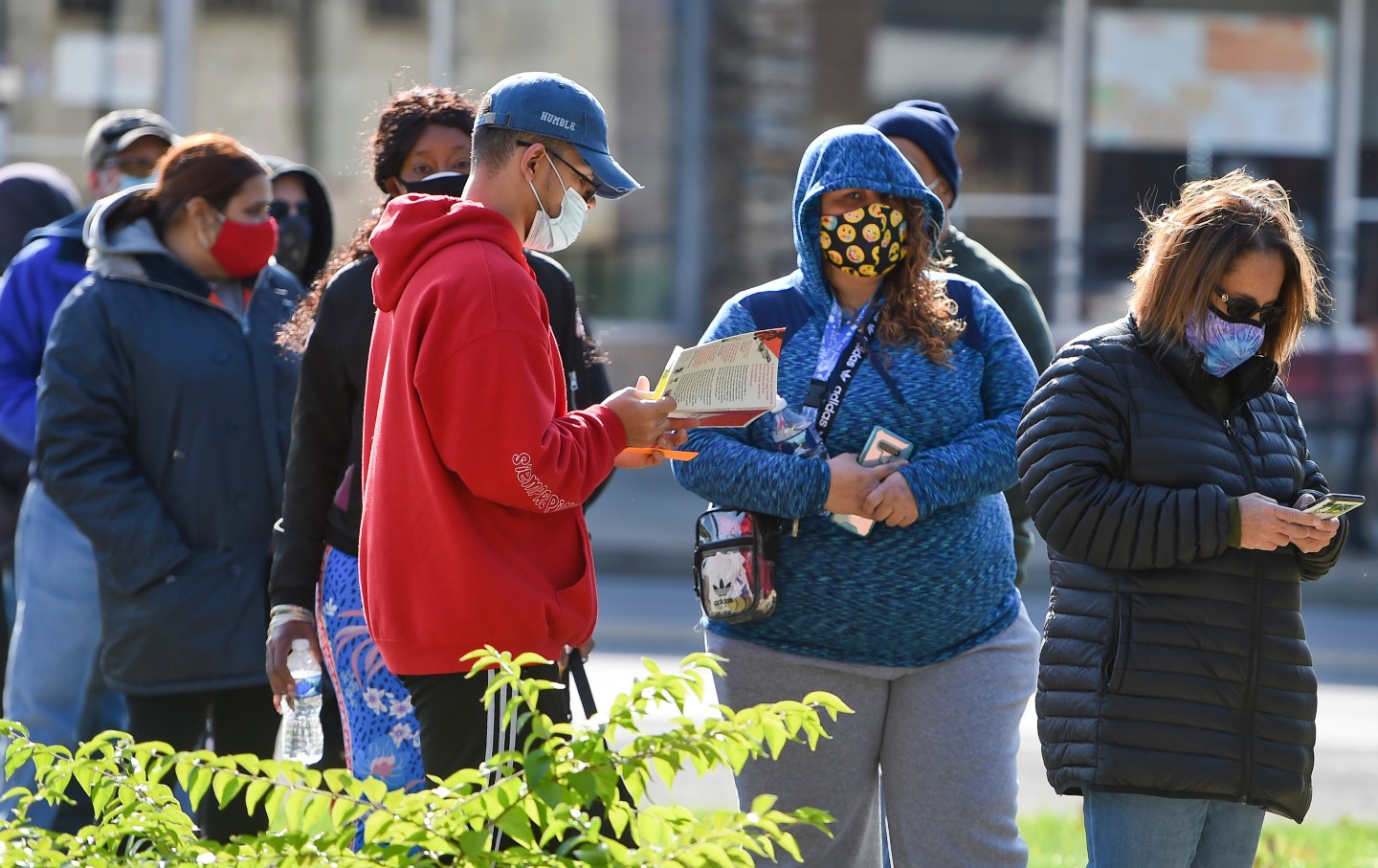 Biden had to speak on election night, and he took the opportunity to deliver a necessary reminder: Tens of millions of votes had yet to be counted nationwide—and hundreds of thousands needed to be counted in Michigan, Pennsylvania, and Wisconsin. A lot of those votes were being tabulated in Detroit, Philadelphia, and Milwaukee—cities where Democrats invariably win big, and that often provide a late-stage boost for the party’s presidential nominees.

“We’re feeling real good about Wisconsin and Michigan,” counseled the former vice president. “And by the way, it’s going to take time to count the votes. We’re going to win Pennsylvania.” He even held out hope for the as-yet-uncalled state of Georgia.

Patience, said Biden, was necessary. “Look,” he argued, “you know, we could know the results as early as tomorrow morning, but it may take a little longer. As I’ve said all along, it’s not my place or Donald Trump’s place to declare who’s winning this election. That’s the decision of the American people.”

That was what Biden’s shaken supporters needed to hear. It was also the truth.

The long, slow count that everyone feared is on. It will take time. Trump was making his outrageous claims. Biden was countering them with the facts and with clear faith in a democratic process that—despite the president’s lies—is functioning as it can, and must.