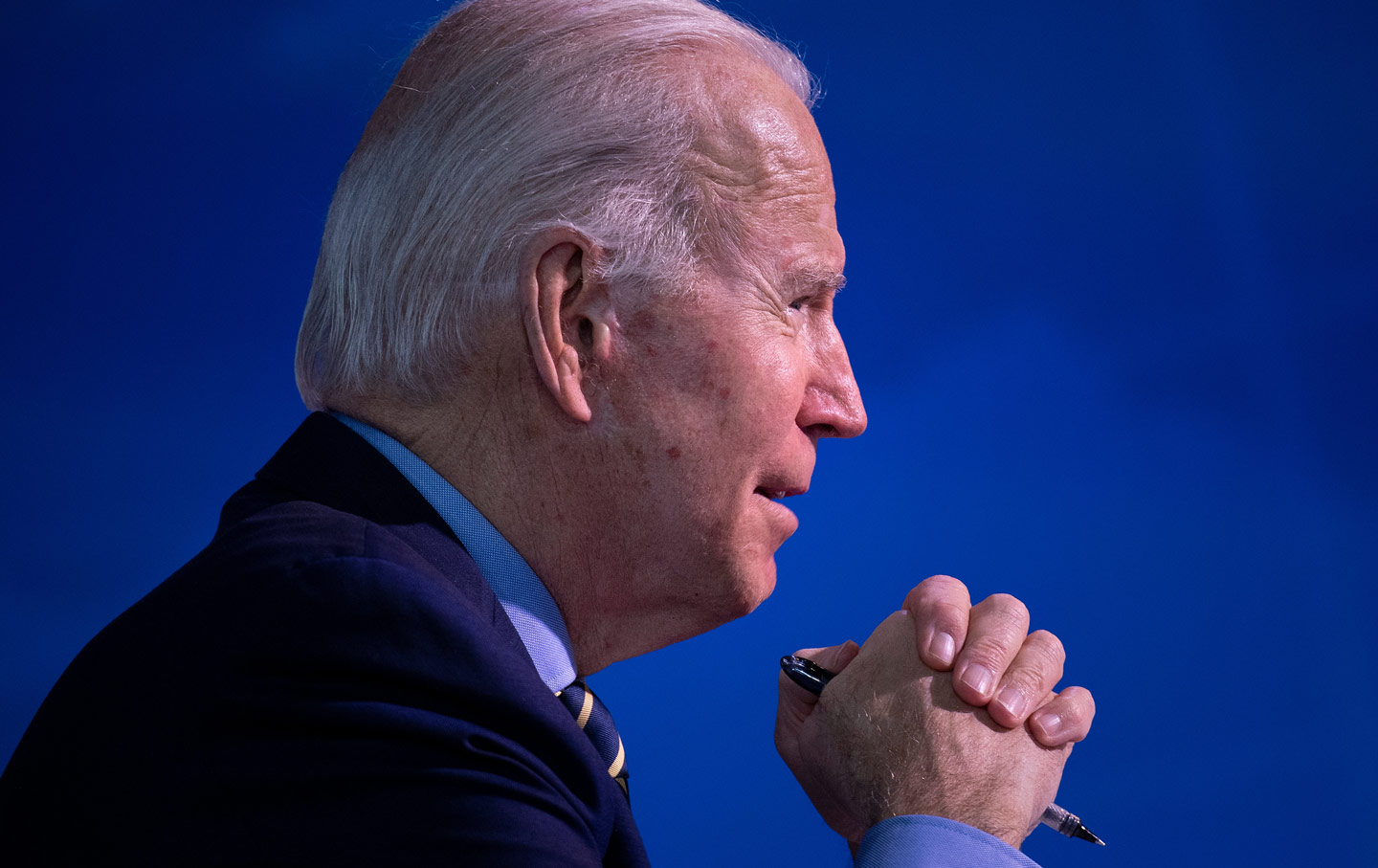 Joe Biden has been on the campaign trail for more than 50 years. Now, after decades of speculation, several false starts, and three formal bids for the presidency, he will finally assume the nation’s highest office. To a greater extent than anyone on the American political stage, he has anticipated and prepared for the job he will take up on Wednesday. As such, Biden understands that the address he delivers after being sworn in as the 46th president must be not just the best of his career but one of the best in the 232 years since the first inauguration.

The challenge Biden faces is profound: He must bury the legacy of a predecessor who incited a fascist riot to overturn the results of the 2020 electi0n. And he must outline a bold agenda for addressing a pandemic, mass unemployment, a climate crisis, systemic racism, and the broken priorities of a federal government that consistently overfunds the military-industrial complex and underfunds the human needs of a society overwhelmed by hunger and homelessness.

Few newly elected presidents have faced a circumstance so fraught as the one Biden must address Wednesday. It’s been just two weeks since Donald Trump incited insurrection. It’s just one week since the outgoing president was impeached. Trump’s Senate trial is being organized as armed troops guard the Capitol, where Biden is to be sworn in. Yet, already, Republicans in Congress and pundits on cable television are encouraging the president-elect to focus his address on “healing” and “unity.” To that end, the next Democratic president is being prodded to channel Abraham Lincoln, the Republican who assumed office on the cusp of the Civil War.

“Abraham Lincoln is America’s better angel—Joe Biden must draw on his spirit,” urges a Guardian headline. Over at Fox News, the message is, “How can Biden unite America? Renew Abraham Lincoln’s call to ‘bind up the nation’s wounds,’” with this observation: “Lincoln knew that all Americans are brothers and sisters.” These calls will appeal to Biden, a veteran Washington insider who bid for the presidency in 2020 as a candidate preaching comity and reconciliation. What could be better, in so conflicted a moment, than a reprise of the 16th president’s inaugural poetry? Why not speak of how “the mystic chords of memory, stretching from every battlefield and patriot grave to every living heart and hearthstone all over this broad land” might “yet swell the chorus of the Union, when again touched, as surely they will be, by the better angels of our nature”?

The answer is more complicated than it might seem on the surface.

Biden will, undoubtedly, make an call for national unity—as new presidents, with the exception of Donald “American Carnage” Trump, invariably do. But it is insufficient to simply recollect—however sincerely—the tortured plea for reconciliation that Lincoln made in his 1861 inaugural address: “We are not enemies, but friends. We must not be enemies. Though passion may have strained it must not break our bonds of affection.” While a poetic appeal for amity would, undoubtedly, get high marks from newspaper editorial pages and a nod from Senate majority leader Mitch McConnell, it won’t be enough to rally the great mass of Americans to take up the necessary burden of forging transformative change.

For that, Biden’s presidential reference point should not be Lincoln but Franklin Delano Roosevelt. The 32nd president also took office in a time of crisis, when the country was ravaged by economic depression, mass unemployment, dislocation, and a deep sense of uncertainty about whether anything could prevent further impoverishment and disarray. FDR knew the country needed more than healing. “The withered leaves of industrial enterprise lie on every side; farmers find no markets for their produce; the savings of many years in thousands of families are gone,” he acknowledged on March 4, 1933. “More important, a host of unemployed citizens face the grim problem of existence, and an equally great number toil with little return. Only a foolish optimist can deny the dark realities of the moment.”

Instead of feelgood talk of unification, FDR called out the Wall Street speculators, the bankers, and their conservative apologists. The nation was in crisis, he said, “because the rulers of the exchange of mankind’s goods have failed, through their own stubbornness and their own incompetence.” He warned against compromise with those who defended the old order, reminding his audience:

Stripped of the lure of profit by which to induce our people to follow their false leadership, they have resorted to exhortations, pleading tearfully for restored confidence. They know only the rules of a generation of self-seekers. They have no vision, and when there is no vision the people perish.

The money changers have fled from their high seats in the temple of our civilization. We may now restore that temple to the ancient truths. The measure of the restoration lies in the extent to which we apply social values more noble than mere monetary profit.

Roosevelt drew the battle lines “against a return of the evils of the old order” and outlined a plan for “strict supervision of all banking,” “an end to speculation,” and the dramatic expansion of the role of government to provide relief for the unemployed, for farmers facing bankruptcy, and for homeowners facing foreclosure. FDR did not mince words. He proposed an agenda for “treating the task as we would treat the emergency of a war.” The agenda would come to be known as the New Deal. It proved to be so popular that Roosevelt’s Democratic Party expanded its congressional majorities in the 1934 midterm elections, and FDR was reelected in 1936 with 61 percent of the vote—carrying all but two states.

As he bid for that second of his four terms, Roosevelt declared:

We had to struggle with the old enemies of peace—business and financial monopoly, speculation, reckless banking, class antagonism, sectionalism, war profiteering. They had begun to consider the Government of the United States as a mere appendage to their own affairs. We know now that Government by organized money is just as dangerous as Government by organized mob. Never before in all our history have these forces been so united against one candidate as they stand today. They are unanimous in their hate for me—and I welcome their hatred.

Franklin Roosevelt recognized that while appeals to unity have their place, there are times when what is needed is a call to action. He delivered one in 1933, and it defined his presidency. Joe Biden would be wise to do the same in 2021.