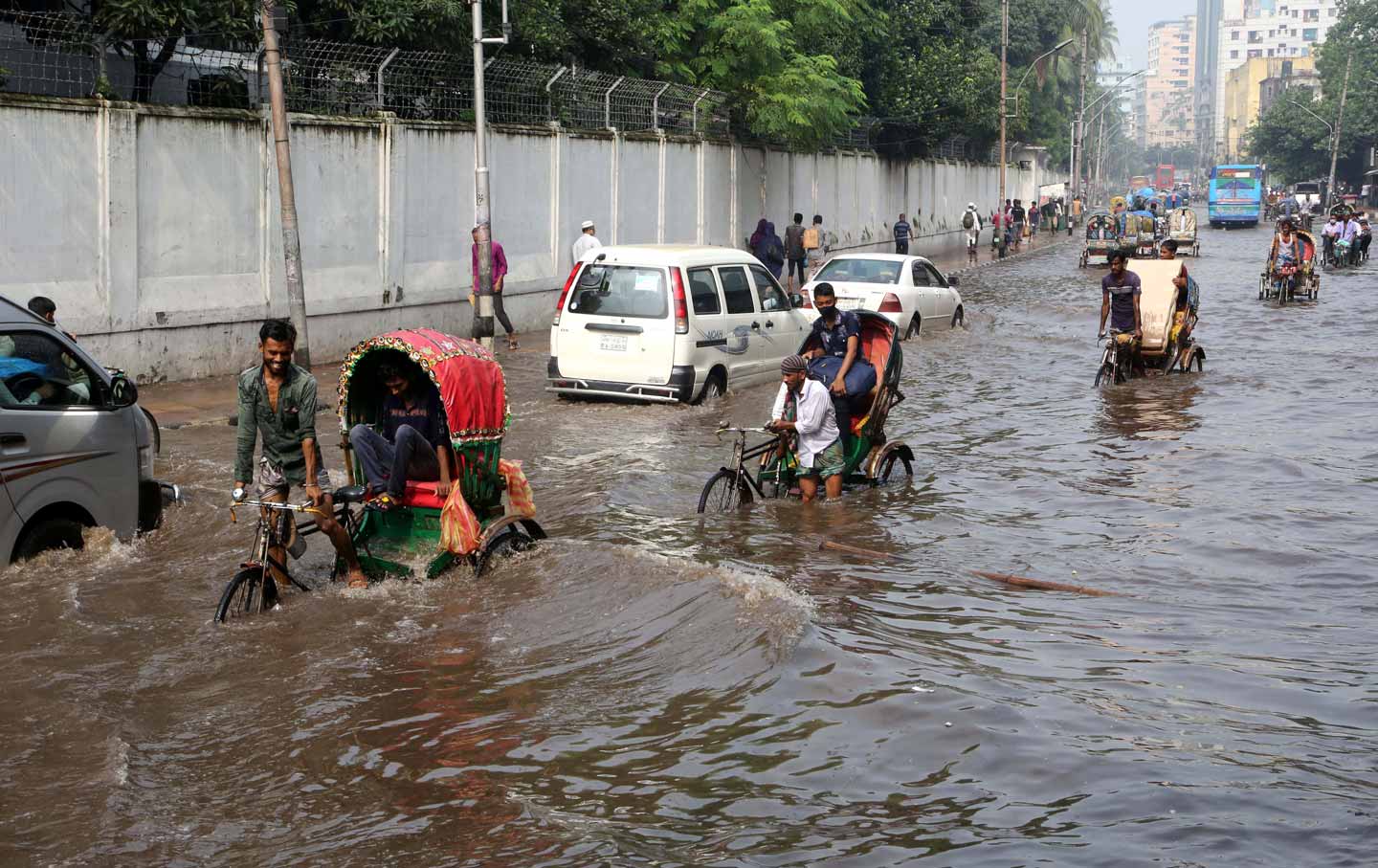 This story is part of Covering Climate Now, a global journalism collaboration cofounded by The Nation and Columbia Journalism Review to strengthen coverage of the climate emergency.

Climate change amounts to an undeclared, deeply unjust war against the global poor. Though they have emitted almost none of the heat-trapping gases that have raised global temperatures to their highest levels in civilization’s history, it is the poor—especially in low-income countries in Asia, Africa, and South America—who suffer first and worst from overheating the planet.

For more than a decade, perilous, climate-driven events in wealthier nations have been preceded by counterparts in the Global South. The deadly heat that has brutalized the American West—and rightly attracted headline news coverage—these past few weeks? That kind of heat has been killing and immiserating people across the Sahel in Africa for many years—for example, in Burkina Faso, where, as one local journalist lamented with tears in his eyes, the suffering was especially heartbreaking among “the old, the old” people in his village. The sea-level rise that is increasingly inundating Venice, despite the $6 billion spent on elaborate sea barriers meant to protect the city’s treasures? Rising seas have been slashing rice yields in Bangladesh for a decade, as salty ocean water intrudes farther and farther inland onto the soil of the tabletop-flat delta of the Ganges and Brahmaputra rivers.

Recent scholarly studies and social media posts have suggested that this summer’s unprecedented heat and unfolding fire season might finally help more Americans acknowledge the realities of climate change. Perhaps now, the thinking goes, more of them will realize that climate change is not only real and dangerous—it’s happening, right now, to them or people just like them. But those realities have been clear for some time: The global poor have been living, and dying, from such climate-driven disasters for years—and with much less attention from the world media.

A glaring example came last week when virtually every news outlet in the Global North ignored a landmark meeting where leaders of low-income countries articulated their positions prior to the make-or-break United Nations COP26 climate summit in November. This V20 meeting—so named for the 20 countries that founded the Climate Vulnerable Forum in 2009—was hosted by Bangladesh in its capital city, Dhaka, on July 8.

Heads of government or finance ministers from 48 countries that are exceptionally vulnerable to climate change and inhabited by a combined 2 billion people attended the Dhaka summit in person or online. So did John Kerry, US President Joe Biden’s international climate envoy; António Guterres, the UN secretary-general; David Malpass, the president of the World Bank Group; and the heads of development banks in Asia and Africa.

The world media was nowhere to be seen.

V20 organizers made it as convenient as possible for European and American news organizations to cover the Dhaka event. Online streaming provided real-time access to the proceedings, in a choice of languages: English, French, Spanish, or Arabic. Mindful of the time differences involved—Dhaka is five hours ahead of London, 10 hours ahead of New York—organizers even scheduled the event for late-night Bangladesh time: It was 10:30 pm local time when the opening session began.

Nevertheless, it appears that the only coverage by a Global North news outlet was a 750-word story by Thomson Reuters Foundation, the charitable arm of the Thomson Reuters global news and information service. And, apparently, the only places that story was picked up were the websites of the Canadian Broadcasting Company and the tabloid Daily Mail in Britain.

It’s inconceivable that the world media would treat a G7 or G20 summit like this. When leaders of the world’s seven richest countries per capita met in June, broadcast networks and newspapers across the Global North provided daily coverage before, during, and after the summit. There was abundant coverage again last week when finance ministers of the world’s 20 richest countries announced a tax crackdown on multinational corporations.

The contrasting silence about the V20 summit reveals an inexcusable double standard on the part of Global North news organizations. The unmistakable, if unwitting, message is that some voices in the global climate discussion count much more than others.

Correcting this double standard is not merely a matter of fairness; it’s also about telling the climate story accurately and in full in the lead-up to the crucial COP26 summit.

Had newsrooms in the Global North tuned in, they would have seen that the V20 summit in fact made plenty of news. Prime Minister of Bangladesh Sheikh Hasina and other V20 heads of government reminded rich countries of their pledge under the Paris Agreement to limit temperature rise to 1.5 degrees Celsius and to provide $100 billion a year in climate aid to poor countries. Secretary-General Guterres and the COP26 president, British MP Alok Sharma, reiterated the point. More surprising, given the United States’ patchy history around these issues, Kerry also endorsed the idea, calling the $100 billion in annual aid “imperative.” V20 finance ministers also announced that each of their countries is creating a National Climate Prosperity Plan to boost resilience to climate impacts and reach net-zero emissions by 2050, while also building economic prosperity. Bangladesh is leading the way with its Mujib Climate Prosperity Plan, named after the statesman regarded as “the father of Bangladesh.”

But to achieve these goals, low-income countries need financial help—which rich countries have promised, but mostly failed to deliver, for years now. The Organisation for Economic Co-operation and Development claims to have given $79 billion in 2018 (the last year with reliable data)—a claim that unfortunately was taken at face value in the Thomson Reuters Foundation article. An analysis by the anti-poverty NGO Oxfam found that this figure is wildly inflated, based on dodgy definitions and accounting tricks; for example, 75 percent of the aid was given as loans, not grants. A more accurate figure, Oxfam concluded, is $20 billion a year.

This aid shortfall carries profound implications, not only for the global poor but also for the rich’s own prospects of survival. One of every four people on Earth lives in the 48 countries in the Climate Vulnerable Forum. If those countries lack the means to choose a green- over a brown-energy future, there is zero hope of limiting temperature rise to 1.5 C. In that event, the rich, as well as the poor, will suffer, as the current heat and fire in the American West—which are occurring after “only” 1.1 C of temperature rise—painfully demonstrate.

All this amounts to news that could hardly be more urgent for people to hear, wherever they happen to live on this planet. It’s past time the world media treated it that way.