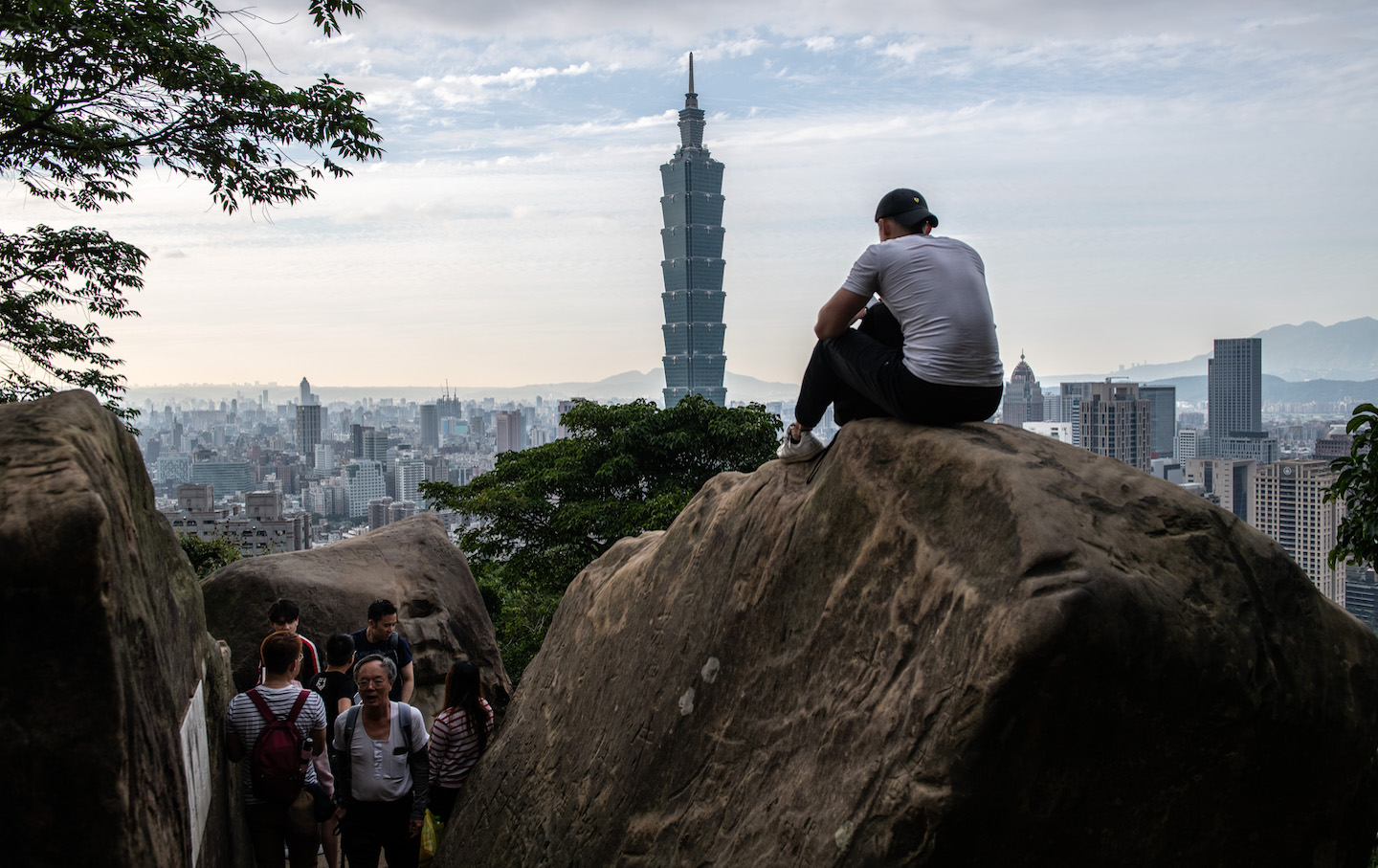 A man sits on a rock overlooking the Taipei 101 tower, once the worlds tallest building, and the Taipei skyline, on the top of Elephant Mountain, 2020. (Photo by Carl Court / Getty Images)

In Sheung-King’s You Are Eating an Orange. You Are Naked., an unnamed man in his early 20s tells his lover stories to woo her: scenes from Chungking Express, facts about Kenny G, the ending of Yōko Tawada’s Persona. Their affair unspools over years, mostly in Toronto, sometimes in Macau, Tokyo, and Taipei. But the book is not so much plotted as recorded, a log of a couple in conversation.

You Are Eating an Orange. You Are Naked.

Into this meandering structure, Sheung-King inserts something else a little radical: his characters aren’t cornered by the white gaze. His unnamed lovers are a Chinese boyfriend (who is the narrator) and his Japanese girlfriend, and they assert an identity that is blithely between, uninterested in angst about whiteness or belonging. You Are Eating an Orange. You Are Naked. does not lapse into what writer Naben Ruthnum calls a “currybook.” A currybook is a type of diasporic story set in an Eastern country that exists to fulfill the storyteller’s (and perhaps the perceived reader’s) emotional need for a homeland without complication—and so the setting lacks any of its own thoroughly alive dynamics, strata, or inconsistencies. In a cruel paradox for writers who are just trying to recount their lives, the tropes of diasporic lit have made it nearly impossible to write about belonging without also placing whiteness at the center of attention—the tropes exist because stories that do this are regularly rewarded with publication. But You Are Eating an Orange. You Are Naked. sidesteps this trap all together: It is bored by Western approval.

So many of the novel’s references are unyoked from Anglo-American culture. The lovers debate different endings for the story of Chang’e, who banishes herself to the celestial bodies to save her husband. They play a game from an Osamu Dazai novel to name the one thing “least like the moon.” The protagonist jokingly refers to Kazuo Ishiguro as his “favourite straight white guy.” Topics range from Barthes to Madame White Snake to The Unbearable Lightness of Being to The Vegetarian, and the author offers footnotes for support, but they are comically random, providing definitions in a hopscotching way that leaves vast swathes of the novel delightfully unguided.

In Columbia Journalism Review, E. Tammy Kim writes about “transnationally Asian” English-language magazines, like Singapore’s New Naratif or Taiwan’s New Bloom, that are united not by nation but by their internationalist membership to the “post-empire liberation movement.” Kim’s focus is on news outlets, but her term “transnationally Asian” describes a sea change in the makeup of the Asian diaspora. Kim notes that the contemporary wave of Asian migration contains “thousands of students and workers to whom a hyphenated, traditional immigrant label does not apply; they are not merely bilingual or multilingual but split between time zones and thoroughly transnational.”

For this new diaspora, mass mass migration and the digital collapse of distance has uncoupled countries from their geographic space: You can hear Fujian community radio playing in New York City’s parks; you can buy boba at Walmart. You are Eating an Orange, You Are Naked. is situated inside this demographic’s interior world.

If the currybook needs a cardboard homeland, transnationalism wants an environment where nothing is fixed. And so in the novel, all meanings are slippery, and everything refuses its prescribed role. The boyfriend is hired by a couple who need a translator—not to translate but to give the (false) impression to a realtor that they don’t speak English. When the boyfriend tries to order off-menu in Chinatown, the server tells him, “The job of a Chinese restaurant in Toronto is to serve customers the idea of Chinese food, to imitate it, rather than present what that really is.” Slippage seeps down to the structural level: This is supposed to be a love story, but the love flits between fleeting and intense. In what could be an inversion of the submissive Asian female stereotype, or just plain toxicity, the girlfriend regularly abandons her boyfriend; she slaps him in the face each time a roaring engine passes, because “it is the fault of men that there are so many loud cars on the street”; and she says things to him like, “Can you ask better questions, please?” Indefiniteness has a dual role: It sets the emotional milieu for this novel and, for the boyfriend, it lets him rationalize away the bald fact that the relationship is kind of a train wreck. A love story is a perfect match for a transnational setting, since we could define a love story as one in which nothing is certain, because once its nature is decided (comic? tragic?), it ends.

Reversals are the novel’s most recurring motif. The front story (the two lovers’ courtship) is constantly interrupted by other narratives, ones that are non sequiturs, fragments, or elliptical even when told in their entirety. Scenes of the boyfriend ferrying to Hong Kong to find his vanishing girlfriend are interspersed with the folktale “Visu the Woodsman and the Old Priest.” It’s ostensibly a parable about the importance of piety, but it ends with its hero praying for 300 years while his kids starve to death. On a condo balcony in Toronto, the protagonist tells his lover the story of Snow in June, the kind of mazy, campy melodrama that Chinese folklore (and Hong Kong cinema) is famous for, about a typically beautiful, long-suffering maiden who never relinquishes her virtue. But when the telling ends, his lover replies, “It says a lot about capitalism. It’s really relevant.” And then says, “I’m quitting my job tomorrow!”

Yet the question remains: Are the lovers able to casually dismiss the material reality of racism simply because they’re rich? As Kim writes, the rise of the transnationally Asian WhatsApper, draped across time zones, corresponds to the mounting affluence of East Asia. This is true in Sheung-King’s novel: The couple zigzags the globe, the boyfriend makes his money from Bitcoin, and he uses the cringe-worthy euphemism “helper” for his parents’ live-in maid—language that’s nonetheless accurate to his class affiliation. It could be that wealth enables the couple (and the book) to shrug off whiteness; their money makes them the center of their world, able to bat away any slights to their subjectivity.

Except the novel’s last act upsets this. The final chapter shifts from first to second person, and the “you” in the title switches referents, changing from the girlfriend to the boyfriend, alone and talking to himself. The relationship has ended. He goes to visit her in Prague, hoping to reinflate what existed between them, but at every turn he’s confronted by the limits of how the world sees him. The same busker keeps shouting “Konichiwa!” at him, and his ex appears to have taken up with Harold Li (the book’s only named character), a kind of umchina, or Asian alpha, next to whom he is a poor copy. Breaking from the dreamy narrative voice of the rest of the novel, the chapter begins flatly, sharing biographical details that recalibrate the whole story—“You are one of those Chinese boys born in West-End Vancouver in the mid-90s”—making clear his ordinary upbringing, and the inescapability of his origins. The novel erases itself. Its whole stance, above the laws of culture, was just a dream, as lasting as the love affair. The single narrator becomes polyphonic, speaking in two voices: one that says the white gaze is negligible, and another that says it’s inescapable. The story is not troubled by this contradiction; it beckons us to feel the same.