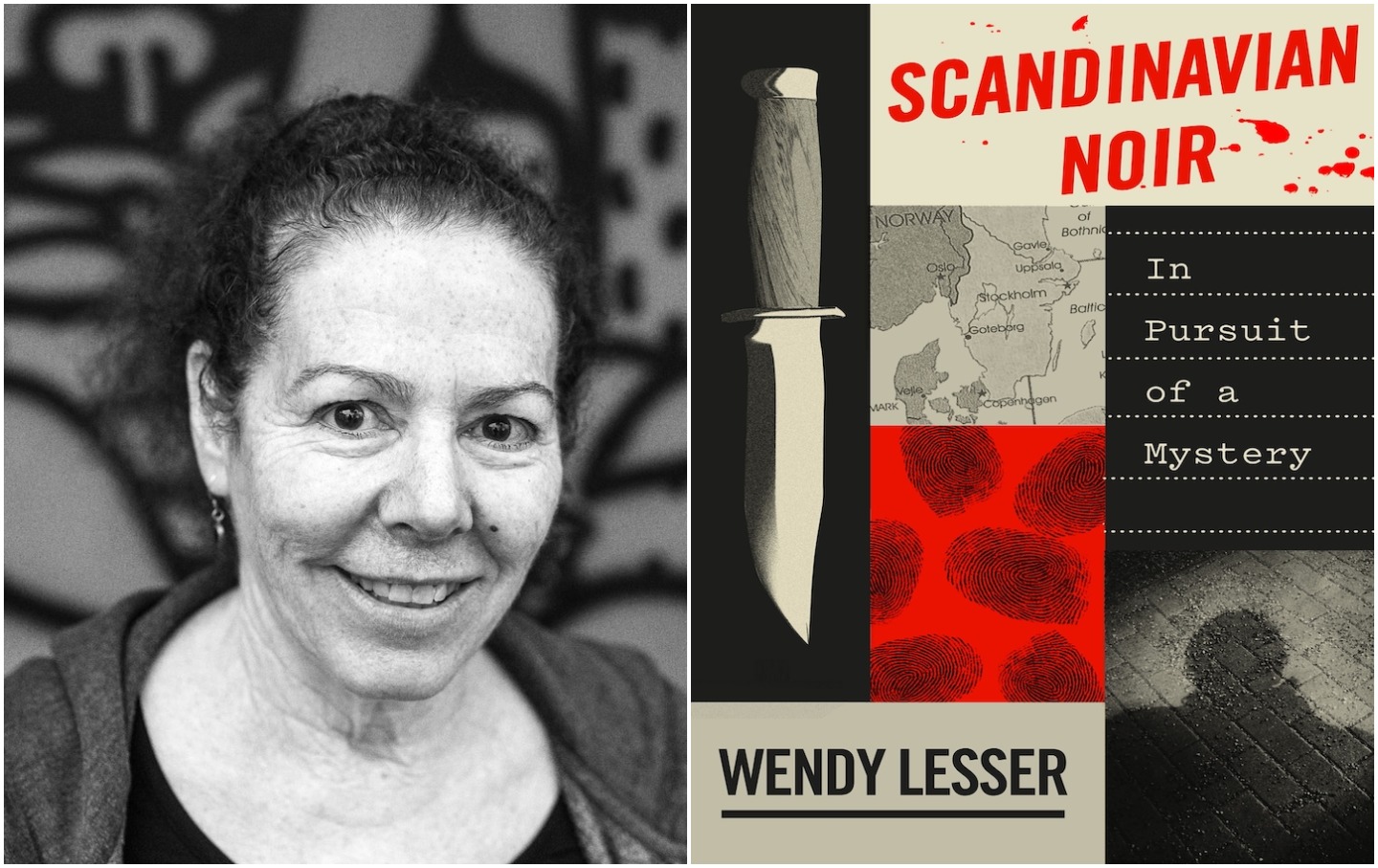 Wendy Lesser first became captivated by Scandinavian crime novels during the early 1980s, drawn in by the thrillingly realistic plots and their attention to social realities. In the wake of Donald Trump’s election, that fascination reasserted itself; she once again longed to be immersed in a region she’d visited only in fiction. And then one day, she writes, the fictional Scandinavia “no longer seemed sufficient.” She traveled to Sweden, Norway, and Denmark, delving into how the real places aligned with—and differed from—the versions she’d gleaned from Nordic police procedurals. The result is Scandinavian Noir: In Pursuit of a Mystery, a book that’s part travelogue and part affectionate dissection of a genre.

As the coronavirus continued its creep across the world, Lesser and I spoke about Norway’s low murder rate, the escapist promise of crime fiction, and the role of guns in Scandinavian culture. This interview has been edited for length and clarity.

Rachel Monroe: Reading your book right now was kind of deliciously escapist, to be honest. You’re on public transportation, and there are people sunbathing and eating in cafes…

Wendy Lesser: It’s armchair travel, which is highly recommended in times like these—although the Scandinavians are suffering under the same kinds of limitations we are at the moment. But you get the feeling that they live under a government that takes care of them and that has concern for its citizens. That was reassuring [when I traveled there] in 2018, and it’s reassuring now, by comparison.

RM: In the first half of the book, you describe your limited understanding of Scandinavian culture, which was based entirely on what you’d gleaned from crime novels. In the second half, you actually travel to Denmark, Sweden, and Norway. You interview homicide detectives, soak up the atmosphere, and visit the towns and cities depicted. In some ways, the real places line up with your imaginary version, but in other ways, they don’t.

WL: The major discrepancy between the novels and reality is that there were so many policewomen working as detectives. [In the books, most of the detectives are men.] It’s fascinating that both male and female Scandinavian detective writers did not use that fact. They’re wedded to the old forms of the genre, where the male detective rushes in and saves the day after the female is chopped up by the serial killer. But in reality, most of the people who are being killed are young men, and most of the people who are solving the crimes are women.

RM: Crime can be a conservative genre, if not politically then maybe just structurally.

WL: Exactly. In terms of style and what characteristics the protagonist is supposed to have, it’s usually male characteristics. But in fact, being able to doggedly pursue lines of research and deal with huge piles of paper and work together with the people on your team—those turn out to be qualities that are more important than being the tough guy with a gun.

RM: You read about Scandinavia for a long time before you made that journey.

WL: I had wanted to go for a long time but didn’t really think I would get there. One of my earlier books involved going to an island off the coast of Estonia. I’m looking across the water, and I can practically see Sweden. I thought, “Gee, I’m so close—I wonder if I should go there.” And I didn’t.

WL: This is definitely a post-2016 book. My first experience of escapism to Scandinavia was during the Reagan administration. Now we’re going through a rerun of that, but it’s 10 times worse. And I’m speaking before we ever heard of the coronavirus.

Going to other countries allows you to get out from under the stress of your own country. Seeing it from the outside can be very freeing—and a little depressing. You realize the flaws of your own country more, but you realize that there is an outside view. I’ve felt this at different periods of my life. I lived in England for two years during the Vietnam War and had a similar experience.

And in Scandinavia, I really felt, “OK, I’ve gotten out from under this temporarily. I can see how horrible [the political situation in the US] is; it makes me as angry as it ever did.” It’s a book where you’re very aware that there’s this awful, looming reality in America and that Scandinavia is being presented as some kind of alternative—Scandinavia on the page, but also the one in reality.

RM: What do you think made Scandinavian crime novels—particularly the Martin Beck series—so appealing to you in the 1980s?

WL: Those books are written by a couple, Maj Sjöwall and Per Wahlöö, who viewed themselves as Marxist. They thought that the Swedes weren’t doing enough social welfare. That was just fascinating to me. Here, I was in this country where every form of safety net for the poor or protection of individual rights was being taken apart, and meanwhile there was this other world where these things were still in place and could be criticized as not being sufficient.

RM: What was so revolutionary about the Beck books, besides their politics?

WL: Before the Beck books, the mysteries that most people were reading in Scandinavia were either in the Sherlock Holmes model with a lot of intellectual ratiocination or country-house murders of the Agatha Christie sort—the mystery as a gemlike piece of writing that had nothing to do with our world. Sjöwall and Wahlöö decided to make very realistic characters set absolutely in their own time. The books came out almost every year from 1965 to 1975, and they were about things that happened in the preceding year. They refer to international politics, to the Vietnam War, to poverty and isolation in Sweden. They are really—in such a gripping way—about the world.

RM: As a writer of true crime, this makes sense to me. If you want to write about a subculture or a place or a way of life or a political issue, people are much more likely to read it if there’s a murder in there somewhere.

WL: My friends always say that I won’t really watch a TV show unless it has a murder in it. Like, if I’ve been watching for half an hour and nobody’s dead, I turn it off.

RM: Why do you think that is? Does it have to do with your own psyche, or is it something broader than that?

WL: I think it all has to do with plot. Things that don’t have murders in them often don’t have such tight plots. I really love plot. I’m not as committed to it in a book as I am in TV or movies, but I like plots, and I like plots that resolve themselves. There have been some great movies with unresolved endings, and I’ve been forced to admit that after watching them two or three times, but for the most part, I really like a plot that comes to an end and ties up the loose ends. Murder plots feel obliged to do that, and other kinds of plots don’t.

RM: While you’re in Scandinavia, you interview a number of real-life homicide detectives. I couldn’t help contrasting their experiences with the way crime and law enforcement work in the United States. There’s a moment when a Swedish police officer tells you that there are only 12 murders per year in Oslo… I was so shocked I almost dropped my book. And then another really striking difference is their attitude toward guns. Can you talk a little bit about firearms in Scandinavia, both how they function in the novels and in real life?

WL: In the books you hardly ever hear about guns. There’s one moment in the 10-book Kurt Wallander series where Kurt actually had to shoot somebody—that stands out. In the Martin Becks, you never hear much about law enforcement carrying guns. One very prominent character, Kollberg, refuses to carry a gun for decades because he mistakenly killed a fellow policeman early in his career. Even in the Jo Nesbos, those notoriously violent Norweigan mysteries, there are knives and baseball bats and weird, complicated torture instruments developed by the evil monster guy, but there aren’t very many guns.

And then it turned out that, in person, there were more guns in these countries than I expected, mainly because in Norway and Sweden there’s a lot of hunting. Quite a few civilians own guns, and they were all going to get their gun permits in Oslo the day I was there speaking to the police. But somehow that has not translated to guns being used in crimes very often. That’s true in Norway, and it’s true in Denmark, which has very, very severe anti-gun laws. The police carry guns in Denmark, but for a civilian to carry a gun, you have to have it locked in a box with the ammunition locked away separately. If you’re caught violating even one of these gun laws, you can go to jail for months or years. Sweden is the exception: They’ve had a rash of gun violence, attributable mainly to gangs. But still, the number of gun murders—or murders of any kind—in their biggest cities is tiny, proportional to the population, compared to St. Louis or Chicago.

RM: You also discuss how these countries are grappling with their own issues with immigration and xenophobia.

WL: Very much so. They are facing similar problems but handling them differently. I mean, their right wing is horrible, of course, but it just feels like miles away from our superconservative, white supremacist right wing.

RM: That’s related to what you were saying earlier—how there’s a kind of hope in recognizing that the way things are isn’t the way that they have to be.

WL: Yes, that’s right. And both travel and books can introduce you to that fact.