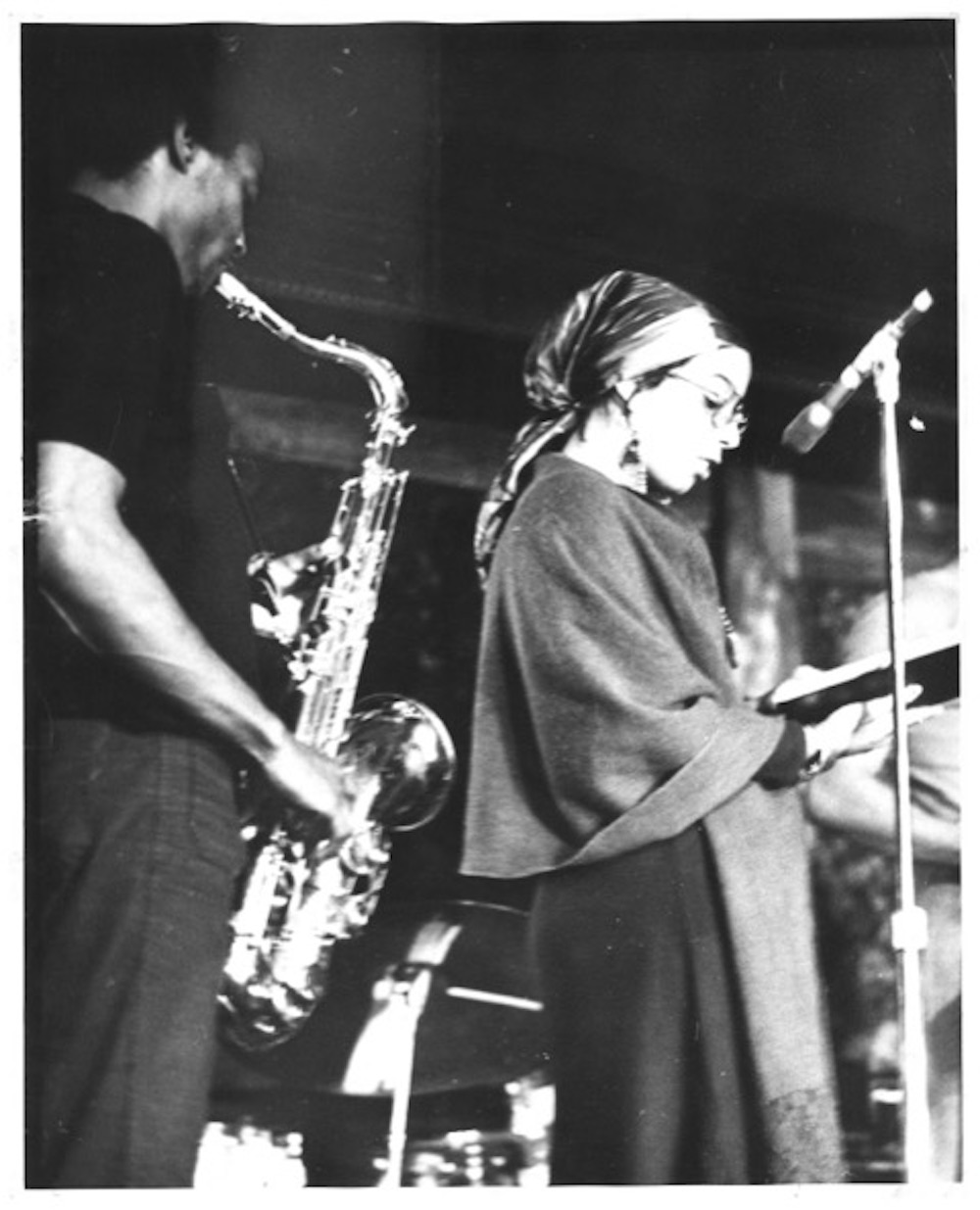 Darting through these poems is an answer to a question, posed by multiple and overlapping waves of Black artists: How do you account for the dynamism at the heart of Black expression, and its centrality to the wider culture it’s been forced to resist? To phrase the question this way invokes the figure of the fighter: not the pedant or the philistine, but the militant, advancing swiftly across a field of possibilities. As a writer, Thulani Davis has adopted an array of canny tactics. Journalist, librettist, novelist, historian, performer, memoirist, poet: these are her many roles, gathered over a lifetime of collaboration and productive flux. In this book the identities are braided into a single ethos; Nothing but the Music marries poetry and struggle, and presents their reciprocity as essential to style:

“That’s just like Angola,” Terri chimed,
“Sometimes it’s not who but what, sometimes not what but who.”
I’m trying to talk to these people about this race riot—
someone is walking on the bar
and everyone of us belongs even now to Miami,
to people we have never seen.

Note the stray strand of dialogue, the wobble of “who” and “what,” the powerful unseen “people,” and the “riot” slashing through. This is a mind which bears the imprint of revolutions in art and politics, someone for whom the “avant-garde” is fiercely bolted to both its meanings. Born in Hampton, Va., in 1949, Davis passed through the successive crucibles of the civil rights movement, Black Power, the New Left, feminism, and the striking bohemian ferment of San Francisco and New York from the ’70s  on, all of which have their marks on her multifarious practice. But the above lines, from “Back Stage Drama (for Miami),” take place in the time before or after the spectacle onstage; rather than capture a performance, the poem unfurls within a glamorous seclusion. “They all like to hang out,” read the first two lines. “Thinking is rather grim to them.” But thinking hacks its way in—advances and invades—inflecting the whole scene and establishing its limits. Angola, riots, people we’ve never seen: There’s a vivid, thrashing world beyond the comforts of this drama, the world that “backstage” retreats from and seeks to guard against, but for which it must finally prepare.

This is an excerpt from Nothing but the Music out now from Blank Forms.

These are backstage poems. By which I mean that they issue from a place of sophisticated doubleness, slung between intimate complication and the blast of political life. The realms clash and melt in music, and especially in Black music—which is not the subject of this book so much as its ultimate horizon. Jazz, punk, R&B: Black performance here figures as an intricate, varied practice as well as a thrumming psychic rhythm, something  that both collapses and expands the subjectivity that consumes it. “Working in new / forms, stepping / outside tradition is / like taking a solo,” opens “For Ishmael Houston-Jones.” Most of these pieces were directly inspired by shows—by Henry Threadgill, Cecil Taylor, Art Ensemble of Chicago, or a horn-player on the street—and are followed by a date and place. This little annotation slits the poem open; the world comes trickling in. It’s a reminder, too, that this particular poet for many years composed write-ups and conducted interviews while on staff at the Village Voice, such that the Black music was not just a private pleasure but planted at the front of her life, its breaking news. 1980, 122nd Street, New York; December 16, 1987—the latitude and longitude of a critical sensibility.

That sensibility is pitched against a backdrop of thrilling, roaring history, full of bold questions, difficult answers, ambivalent heroes, and eclipsed hopes. In the 1960s, Larry Neal’s dream for the Black Arts Movement was to produce an un-alienated expression, one aligned—reunited—with what was happening in the street. The Black feminism that followed deepened and broadened that understanding, as it grasped at what June Jordan called the “the intimate face of universal struggle.” Davis’s work as a poet is driven by both of these impulses: that art should be fastened to politics, and politics to  the texture of life. The result is a marvelous and subtle warping of our sense of social scale. “this is not about romance & dream / it’s about a terrible command performance of the facts,” she writes in her tribute to Cecil Taylor. These poems dilate and contract, working  to convey affection and wryness, about the People in the abstract and the people on the block:

I know there’s only minutes left
have to tune in
find out if it’s a riot in LA
or if we can still dance
to Teddy Pendergrass
& songs we hummed before
they made love stories
called “Damage”
Al Green is crying,
Aw baby, did you mean that?

was the jury hung in LA?
did they acquit somebody in LA?
will we burn it down on Saturday
or dance to the Rhythm Revue
the not too distant past
when we thought we’d live on?

The tone slides into, and out of, an elaborately mediated anguish, all the more poignant for its manifestation as an invisible set of sounds: Al Green, Teddy Pendergrass, and the nattering dominance of the radio, which lets you simply “tune in” to “find out if it’s a riot in LA.” The end of “It’s Time for the Rhythm Revue” is marked by the words, “1992, Brooklyn, NY”—the year, but not the city, of the acquittal of the policemen who beat Rodney King. The event crash-landed into public consciousness but is refracted in this poem through the prisms of humor and denial. The LA riots do not figure here as some flabbergasting rupture. They are expressions of a people moving, in harmony and under fire: They take their place on a wrenching continuum, which includes Black song and dance.

Nothing but the Music, then, is a coy title. It pretends to bracket the whole world only to assert the capaciousness of what Davis’s late husband, the jazz musician Joseph Jarman, referred to as Great Black Music. There is nothing but the music because that music is fiercely and irrefutably expansive, a quality painfully thrust upon it by the experience of history. Everything is the music: struggle, bafflement, war, love. The pain these things precipitate is the music, too. Hence the voluptuous shift in register that is a hallmark of these poems. “Bad Brains, a Band” takes the legendary DC punks as a prompt to trace the outlines of gender and class. The piece swings from “the idea they think must scare people to death” to the melancholy observation that “he wanted to buy me a Bentley / because he didn’t want to be black.” And it is something like this melancholy—not as a private indulgence but as an aesthetic inheritance—that animates “Mecca Flats 1907.” This poem in many ways exemplifies the themes that flow through this collection. The Mecca Flats was a famous apartment complex on the South Side of Chicago. Originally built as lodgings for wealthy visitors to the 1892 World’s Columbian Exposition, it was converted into apartments before being razed in 1952, over the protestations of the black people who lived there. “Mecca Flat Blues,” the song by James Louis Blythe, had established the building’s place within the symbolism of Black art, its salacious verses making news in its day; Gwendolyn Brooks’s In the Mecca (1968) would fortify that place. In the Mecca marked Brooks’s entrée into the Black Arts Movement; the building itself served as, among other things, a microcosm for the complications of the Black Power to which she had just dedicated her work. These legacies surge through Davis’s poem, too, which is stalked and amplified by lost voices, macabre images, muffled histories, and piano notes. The poem marks a physical location and the Black music that enlivens it, drawing into its forcefield a host of spiritual resources. These propel this particular writer, and tell the story of her people, who have always lived on “the south side of anywhere / That’s blue.”