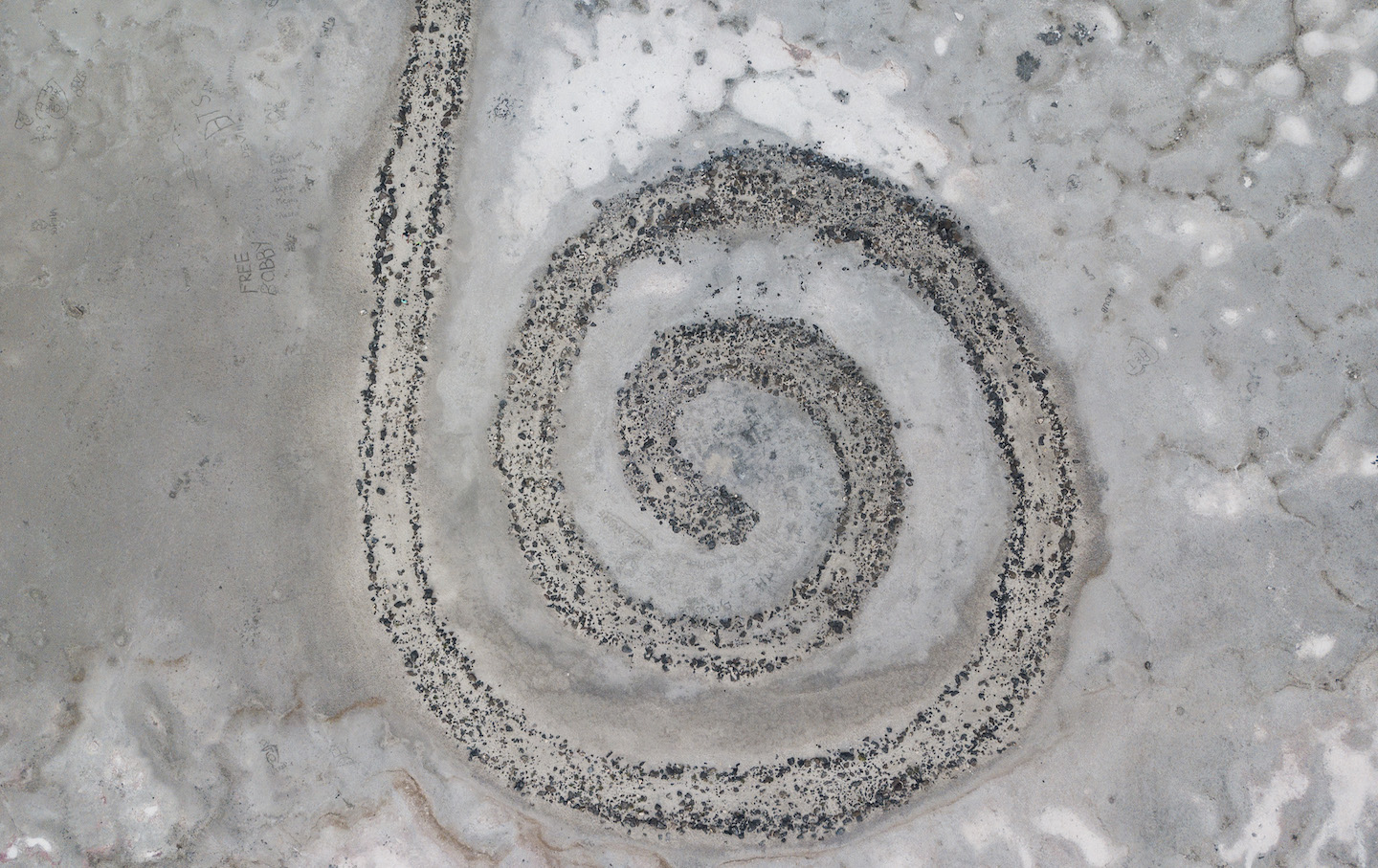 One of the more tragic errors of our time is our ready conflation of what is iconic with what is well branded. In an effort at bypassing the difficult work of becoming someone, many of today’s would-be writers, artists, and thinkers opt to present themselves as walking pitch decks, glomming onto a marketable persona and riding it as hard and far as they can. Our moment’s lack of nuance is frequently bemoaned, but what strikes me as the far greater omission is the lack of real mess and breadth: the modern individual’s resistance to any inconsistency that can’t be readily assimilated into her personal brand. The artist is rebranded a “creator”; the goal is to “make things” to “put out there.” It sometimes feels we have forgotten the value of remaining open—of receiving, rather than curating, experience.

Then there’s Rachel Kushner, a writer seemingly of another time. The Hard Crowd, Kushner’s first collection of essays, is marked by the same qualities as her exceptional fiction: the roving, self-assured intelligence of an autodidact, a distrust of easy answers, and a preternatural gift for situating textured human narratives and political struggles within a wide, cinematic frame. On the cover of The Hard Crowd, which presents two decades of her published nonfiction, Kushner toys with literary iconography: She leans against a vintage Ford Galaxie, cross-legged, with a dark-lipped smirk. The obvious parallel is with Joan Didion, resting against her Stingray Corvette, in that ubiquitous portrait taken by Julian Wasser.

Kushner believes in the influence of the subconscious, as well as the power of close reading, so I take it there are no accidents here. Like her fellow Californian, Kushner stares knowingly at the photographer; but where Didion protectively wraps one arm around her waist, Kushner’s arms hang by her side. Didion holds a cigarette in one hand, while Kushner holds nothing, but her left hand is curled into a fist. On its own, Kushner’s image makes an immediate impact, radiating power and surety. Held beside Didon’s portrait, its effect is even stronger: a literary icon plainly stating her arrival. Or maybe Kushner would say I’m demanding too much from one photograph. After all, as she writes in her essay “Made to Burn,” “an appeal to images is a demand for love. We want something more than just their mute glory. We want them to give up a clue, a key, a way to cut open a space, cut into a register, locate a tone, without which the novelist is lost.” Kushner’s not lost, here. She’s ready to get back into the car. She’s itching to drive.

Kushner’s literary output to date, which includes three novels and three novellas, cuts a wide swath: from the 1959 Cuban Revolution to the New York and Italian art scenes of the 1970s to the current-day California penal system, Kushner’s settings are united by little beyond her wide-set vision, which details each setting and character with cinematic realism and old-school, Dostoyevskian depth. Through these essays we are given access to some of her most powerful influences and instincts. The essays come together to form an image of the writer as a vehicle through which images and experiences pass, rather than a pulpit out of which declarations are issued. In other words, Kushner reminds us of the crucial difference between writing and branding.

About half of the collection’s essays are works of criticism: Kushner’s assessments of Jeff Koons, Denis Johnson, Marguerite Duras, Clarice Lispector, and Nanni Balestrini, among others. There are two long-form pieces that handle the political with a touch of Didion-like distance, but none of her ambivalence. “We Are Orphans Here,” one of those pieces of political reportage, follows Kushner’s experiences at the Shuafat Refugee Camp in East Jerusalem, where she spends her visit with Baja Nababta, a beloved activist who is murdered weeks after Kushner leaves the camp.

Writing of her experience with Nababta, Kushner details the shortcomings of her own perspective, never reaching for the comfort of holding an opinion in the consensus, which is, of course, just another fiction. Looking at her notes from her trip, Kushner acknowledges what she left out: “The other thing I suppressed, besides Baha’s admissions of fear, was his desire for police. I didn’t write that down. It wasn’t part of my hero narrative, because the police are not part of my hero narrative.” She resists the stultifying impulse to make the world cohere with her expectations of it. As a result, Kushner sits in the discomfort that most avoid. In one remarkable passage, Kushner observes a young girl in the refugee camp, and acknowledges her own desire to comfort her:

I was desperate to give her something, to promise something. It’s very difficult to see a child who has suffered so tremendously. It’s basically unbearable.… I’d give her my earrings, was my next idea, but then I realized that her ears had been burned off in the fire. I felt obscene. I sat and smiled as if my oversize teeth could beam a protective fiction over this poor child, blind us both to the truth, that no shallow gesture or petty generosity would make any lasting difference, that her life was going to be difficult.

The question of what fiction shows us—and what it keeps us from—is central to The Hard Crowd. “We Are Orphans Here” is one among several of Kushner’s essays written after the death of its subject. In one sense, the book might be considered a series of elegies. But in an essay on the images that inspired The Flamethrowers, her breakout novel about motorcycle racing, the land art movement, and Italy’s revolutionary Years of Lead, Kushner sneaks in a comic remark that feels almost Larry Davidian, “Neither tragic nor legendary, I myself will never die.”

Death animates Kushner’s reflections on the recently deceased Italian radical poet and artist Nanni Balestrini, with whom she formed a friendship after publishing The Flamethrowers, as well as her reflections on the painter Alex Brown in “Bunny,” and on Denis Johnson’s posthumous The Largesse of the Sea Maiden. The Hard Crowd’s titular essay is itself an elegy for youth, that time in many of our lives when our instincts and impulses are least mediated, when experience races at us in its most immediate forms. The essay is both an act of mourning and an admission of loss, a recognition that to narrativize one’s youth is to push it further away, to wear down the grit of memory into a kind of common fiction.

If death’s wake is Kushner’s frequent standpoint, her own demise is, she confesses, her great fear. (Though one wouldn’t guess it from the way she writes about motorcycle racing.) What she fears is not the process but the thing itself: “I am not afraid of dying, like I said. What I fear is to be dead. I dread the end. Not coming, but arrived,” she writes in my favorite essay of the collection, “The Sinking of the HMS Bounty.” The essay opens on a youthful, drunken night in Munich, when she and her companions attempt to break into a building in the vast Olympic Park, searching for a place to sleep. Later in life, Kushner connects the dots, realizing that this was the same place where Israeli athletes had been abducted, tortured, and eventually murdered during the 1972 Olympics. This juxtaposition—giddy, juvenile antics unwittingly unfolding at a site of tragedy—gathers together many threads of the collection (and of Kushner’s work more broadly.) Yet it’s all handled with Kushner’s light and knowing touch, as the essay immediately roams from that fragment of her youth to a restaurant in LA’s Koreatown, from the Boston bombings to the Titanic, from Danish design to the end of capitalism. Here, too, she pronounces nothing but her own shortcomings: “You have to understand capitalism perfectly to know if the universe of free markets is shaped like a cake donut…or is, in fact, a limitless reality, as it wants us to believe. Just to be clear,” she writes, “I don’t count myself among those who do understand it, not even imperfectly.”

Kushner’s recurrent themes are classic cool girl fodder, though in her hands they never touch cliché: These essays hover around motorcycle races and classic cars; American paintings and experimental films; live music; femininity; Italy; Gen X; life; and of course death. Seen from a different angle, each of these essays is, in its own way, concerned with the distinction between what is fiction and what is fake, what is contrived out of creativity and inspiration and what is just contrived. In her essay on Johnson, Kushner writes, “The stories…ask elemental questions about fiction, not as a literary genre but as a human tendency.” The human tendency toward fiction is Kushner’s chief subject, too—from the “corporate fictions” explored by Jeff Koons’s alcohol-advertisement paintings to the fictions Kushner tells herself in the aftermath of Baja Nababta’s death; from her examination of Cormac McCarthy’s skewering of the “American myth of self-reliance” to her acknowledgment that “reality itself has become false, an ideology, a fiction, a novel.”

Questions of ideology and projection converge in Kushner’s essay on Marguerite Duras, the brilliant communist, alcoholic author of The Lover, and one of Kushner’s cited influences. “Alcoholic, woman, writer—these identity-acts, the one who drinks, who lives as woman, who writes, seem to relate, all three, to a more fundamental, primordial action: the production of fiction, of experience woven into language,” Kushner writes. “If we associate fiction with writing, what about with women? With drinkers?” Kushner is fascinated by those who frame their own living in the terms of their fiction: Of her parents’ friend the author David Rattray, Kushner notes that he saw the world as if it “were itself a book,” and she recalls Duras’s claim that the story of her life did not exist, but “the novel of her life—yes.”

The Hard Crowd opens with an unattributed epitaph: “What others get from me is then reflected back onto me, and forms the atmosphere called ‘I.’” This turns out to be a quote from Clarice Lispector, but without attribution it reads almost like a warning or explanation issued by Kushner herself: Her explorations and experiences are absorbed by her reader, and projected back onto her. Kushner’s awareness of the exchange—her recognition that to write is as much to form space as to peddle content—gives the collection a transcendent quality, each memory recalled or work of art evoked contributing to an atmosphere in which the reader, too, forms a part. “I was the weak link,” Kushner writes, “the mind always at some remove: watching myself and other people, absorbing the events of their lives and mine. To be hard is to let things roll off you, to live in the present, to not dwell or worry.” Kushner, on the other hand, knows she is the soft one.

“A novel,” Kushner said in an interview after her 2018 novel The Mars Room was nominated for the Booker Prize, “is a chance to get mugged in a dark alley by your own unconscious, or at least, to have an encounter with yourself.” It’s that word, “encounter,” that holds the key. Kushner’s chosen fiction is that the writer isn’t the one who goes hunting for material; the writer isn’t the one who builds a platform on which to stand. To write is to hold space for what comes toward us. To have an encounter. What a concept.