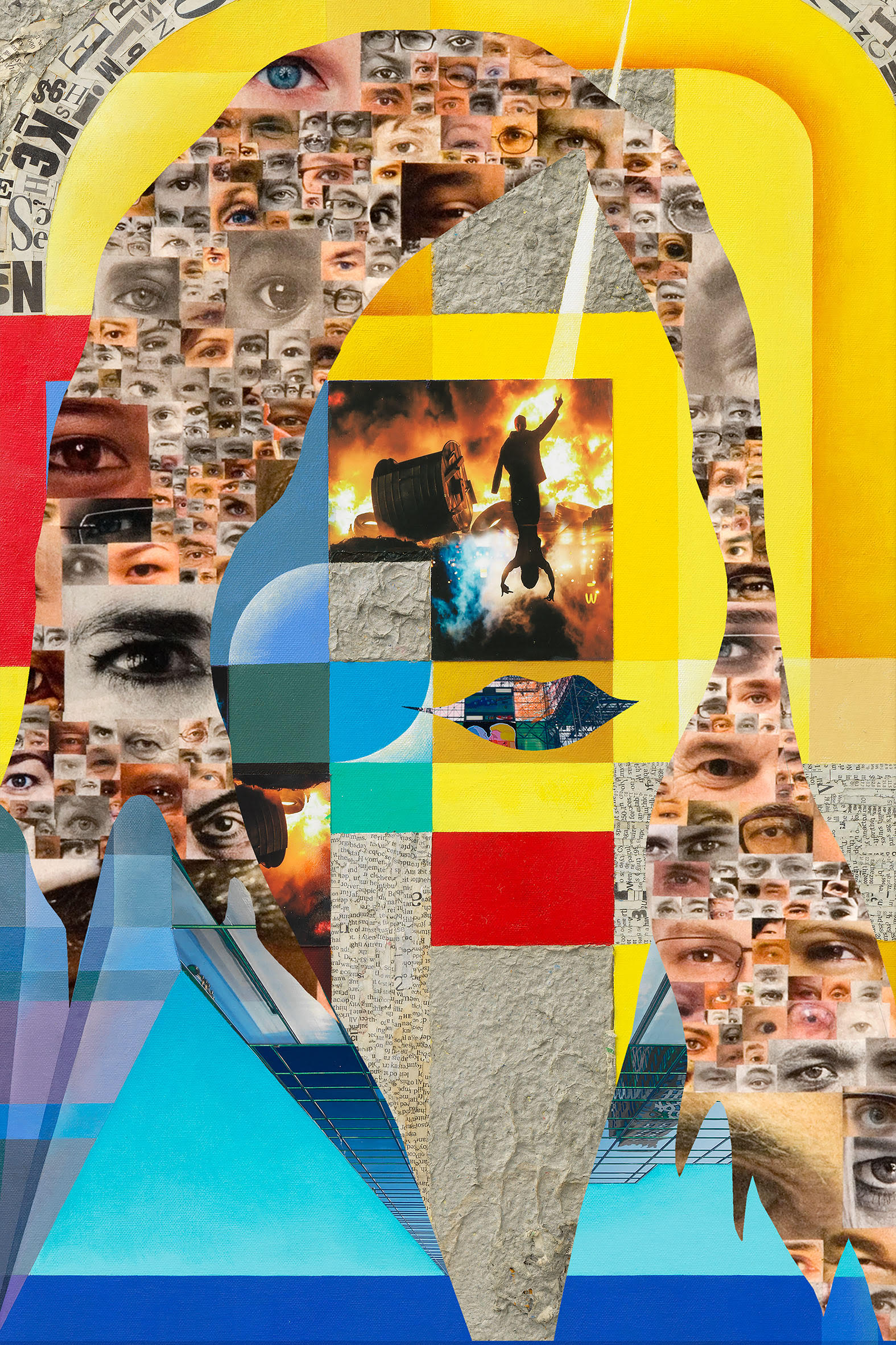 Anna Ostoya, an image from Politics and Passions, by Anna Ostoya & Chantal Mouffe. (Courtesy of the artist / MACK)

Chantal Mouffe is one of a rarefied group of academics whose work does not focus on art but who has nonetheless become a fixture in the art world. Mouffe is a political theorist known for her critiques of neoliberalism and her embrace of populism. She has written only occasionally on art and, by her own account, was rather baffled when she first received requests to appear on museum panels or write for publications like Artforum. Nevertheless, writers and curators often cite Mouffe’s criticism when discussing the role of art in public discourse. Artists working in a wide array of mediums and approaches—from ​​Thomas Hirschhorn to Liam Gillick—find her writing useful in understanding their own ability to communicate about the political dimensions of their work.

One of Mouffe’s most beloved texts, especially in the art world, is a 2002 lecture at the University of Westminster titled “Politics and Passions: The Stakes of Democracy.” In the lecture, her first as a professor at the university, Mouffe railed against the desire to refigure politics as a moral debate and the resulting consensus-driven approach. “Morality is rapidly becoming the only legitimate vocabulary,” she argued. “We are now urged not to think in terms of right and left, but of right and wrong.”

By conflating politics with morality, liberals thought they had moved beyond the barriers of right and left. Instead, by attempting to eradicate antagonism from the political process, liberals in the West effectively neutered the possibility of truly productive political action. Mouffe argued that affect was an essential component of politics and that a focus on rationalism would only embolden the ascendent populist right, which made an emotional pitch rather than a technocratic one to prospective voters. It’s easy to see what artists found compelling in Mouffe’s speech: Many artists who engage with politics are distinctly interested in the potential of their work to create radical social change by connecting with viewers on an emotive level.

It is for this reason that Anna Ostoya, the Polish artist best known for her multimedia collages, found herself drawn to Mouffe. The two met at an event at the Camden Arts Centre in London and began to discuss a potential collaboration. Mouffe gave Ostoya a printed copy of her “Politics and Passions” speech and suggested using it as a starting point, because it was a distillation of the theories Ostoya found most interesting. Ostoya began to deconstruct the text, cutting it up and reorienting it on the page. The resulting book, also called Politics & Passions, falls somewhere between a lyrical essay and a prose poem. It’s a fascinating treatment of an academic text—one that draws out both the emotion and the urgency of the original speech.

While Ostoya hews to the original text of the source material, she divides up the paragraphs and breaks up words and sentences. In rearranging the speech, she follows one rule: Any mention of “I” is put at the top of the page in an attempt to foreground the individual. Interspersed throughout Politics & Passions is a series of collages based on sketches of subway commuters that Ostoya created more than a decade ago. She successfully places the everyday people that form Mouffe’s imagined subject in conversation with the text itself. The result is Ostoya’s attempt at a more democratic text, one that is capable of transmitting the complexity of academic prose to a broad population.

Politics & Passions has much in common with the book projects of the Soviet Constructivists. Using abstract forms and geometric shapes, artists like El Lissitzky and Aleksandr Rodchenko created a system of communication that, they contended, could be used to communicate more effectively with the proletariat. These signs would be mass-produced, part of a more direct and straightforward visual language. The artists’ role, too, would be simplified: They’d become just another set of workers tasked with communication.

The Constructivists saw photomontage as part of this new visual language, an opportunity to use photography’s documentary capabilities to construct and disseminate reality as they saw it. The digitally stitched collages in Politics & Passions mix a variety of textures and images that hark back to avant-garde photomontage, a longtime focus of Ostoya’s practice. In particular, she is fascinated with the way historic avant-garde movements can be translated into contemporary visual language—a previous series by her reinterpreted the source material of famous modernists like Man Ray and Georges Braque as ruminations on the legacy of Western feminism.

The collages in Politics & Passions take the aesthetics of the Constructivists and apply it to Mouffe’s writing on politics and democracy, which Mouffe contends has often been mischaracterized. Her objection to liberal moralizing and her embrace of antagonism as a political tactic would sound more familiar coming from a right-wing contrarian, some might argue, rather than a left-wing political theorist. That, Mouffe would say, is exactly the problem.

For decades, Mouffe has campaigned to revitalize left populism, a project she sees as the last hope of restoring democracy. In 1985, she published Hegemony and Socialist Strategy with the political philosopher Ernesto Laclau, her husband and longtime collaborator. The duo argued that the Marxist belief in a working-class revolt against capitalism was doomed to fail because it was impossible to mobilize solely around class. They were responding to the death pangs of social democracy and the welfare state in the West and the birth of neoliberalism during the reigns of Margaret Thatcher and Ronald Reagan. At the same time, new identity-driven movements were gaining strength.

Mouffe and Laclau suggested that the left of the late 20th century, and Marxists in particular, were restricted by their own ideology. By emphasizing class over identity-based affiliations, the left had failed to appeal to growing social movements like feminism and the gay rights movement. To revive leftist populism, Mouffe and Laclau argued, the kind of power inequalities that Marx thought would mobilize the working class needed to be framed as identity-based oppression. Only then would it be possible to produce the kind of antagonism and friction that they thought was key to any true social change. While the left did ultimately come to recognize the importance of organizing based on identity, the underlying thesis—that opposition to populism was a recipe for future electoral defeats—proved to be compelling, given the shape of politics a decade after the book was published and before Mouffe delivered her 2002 speech. Over the course of the next 15 years, she would watch the ascendency of neoliberalism and the decline of the left, both in Europe and the United States. (Though Mouffe and Laclau might not have predicted the way a cynical approach to identity politics has infused American politics today, where even organs of the national security state tout their identity-inclusive bona fides.)

Two decades after it was first presented, Mouffe’s “Politics and Passions” speech has proved similarly fateful. Her premonition that consensus-driven politics would only embolden the populist right was prescient, as much of the Western world has slowly inched rightward. Likewise, her assertion that conflating politics with virtue would be the downfall of centrist candidates proved true in the wake of Hillary Clinton’s 2016 campaign. And the creeping presence of neoliberalism—in the form of growing wealth inequality and the gutting of state-run social programs—that she explicated in “Politics and Passions” has only accelerated during the Covid-19 pandemic. “I think that the pandemic could give neoliberalism a new lease under a much more authoritarian form,” she told Ostoya in a conversation in February of last year.

At the same time, Mouffe believes the pandemic, as well as the ongoing environmental crisis, has presented an opportunity for leftist populists to organize. Central to that, however, is disseminating material that could provide fodder for such a radical reimagining. In order to do that, the material had to be compelling on a rhetorical level. Critical writing—particularly in political science and, to a lesser degree, in the humanities—has only recently concerned itself with affect. While the rise of affect theory has led to a consideration of the emotive values of a work or idea, academics themselves are still expected to write with a certain amount of remove and impartiality.

The same does not apply to speeches, which both offer more potential for the display of affect and are considered acceptable places for emotional appeals. Mouffe speaks about her theories with gusto and passion, often dramatically pausing or motioning with her hands to accentuate her points. However, when a speech is transcribed, it loses some of that affective layer and once again becomes a more distant work of prose. In adapting Mouffe’s essay for Politics & Passions, Ostoya took a speech that had been converted to static text and replaced its missing passion.

Under Ostoya’s careful eye, a dense statement about liberalism’s desire to dissolve the antagonism of politics becomes a simple and expressive stanza of poetry. Using line breaks and white space, Ostoya mimics the speed and cadence of a speaker, telling us when to pause and how fast to read:

The political
in its
antagonistic dimension
cannot be made
to

simply
by
denying it,
by

Ostoya’s impetus for breaking down Mouffe’s speech was partly the artist’s own attempt to understand the source material. Ostoya is not a native English speaker, and by her own account she lacks the kind of academic training that would have taught her to parse a text like this. By breaking down the sentences to their core components and considering the emotive impact of Mouffe’s words, Ostoya was able to better understand the concepts underpinning the speech.

In so doing, Ostoya brings to light one of the central dilemmas of Mouffe’s political approach: she tends to avoid referring to herself as an academic, choosing instead to identify as an intellectual activist. While Mouffe’s work can be considered fairly accessible in the abstruse world of political theory, reading it can still be a difficult endeavor for many. Her insights on the rise of neoliberalism and the populist right were revelatory—but what value is that argument if it can’t reach as wide an audience as possible?

Perhaps that’s the broader political purpose of Ostoya’s project: to serve as an interlocutor by offering a visual language through which one can understand a complicated text. Her decision to mimic the rhythms and gestures of a speech, coupled with her decision to put first-person pronouns at the top of the page, are a compelling enactment of Mouffe’s theories of identity and its political effects. Ostoya democratizes access to the ideas in Mouffe’s writing, aligning the presentation of the text with the needs of the audience.

Much like her Constructivist forebears, Ostoya has created a visual language that is capable of breaking down dense prose and effectively communicating the passion behind Mouffe’s project. Mouffe’s goal may be to mobilize a movement of left populists, but it’s the visual language of Ostoya’s interpretation that might best convey that message to the masses.