Like many great TV shows, Painting With John teaches its audience how to watch it. John Lurie—writer, director, musician, and star of the series—introduces a general blueprint in the first episode designed to ease viewers into his reflective, playful worldview. The show opens with serene drone footage of an unnamed Caribbean island’s natural landscape, right up until the drone, piloted by Lurie, suddenly crashes. Following the opening credits, Lurie sits at his desk and paints with watercolors while recounting stories from his life. Sometimes he recalls scenes from his childhood years or young adulthood. Other times he describes encounters with various strangers and celebrities (Barry White, Anthony Bourdain, Zach Galifianakis, etc.). Meanwhile, photographer and editor Erik Mockus films Lurie’s painting process in close-up so we can witness the colors mixing and blending on the canvas while he speaks. Painting With John also features whimsical sequences of Lurie at play—dancing, fooling around with a branch that resembles an elephant trunk, rolling tires down a hill—and brief scenes with his longtime assistant, Nesrin Wolf, and aide Ann Mary Gludd James. (They’re credited as cast members in the series.) Lurie’s own music plays throughout each episode, and still photographs of his paintings appear alongside the end credits. A meditative tone pervades this six-episode series, from Lurie’s narration to the warm imagery of the island where he lives to the act of painting itself, sinuously edited together to create the feeling of an eccentric relaxation tape passed among friends.

To state the obvious, Painting With John isn’t an instructional painting show in the PBS tradition, and thus Lurie doesn’t present any of this material in a straightforward manner. Instead, he frequently interrogates the show’s premise, which is ostensibly a man at a desk talking about life while he paints. He probes this framework partly to undercut the egotism of the enterprise and partly to illustrate the creative artifice upholding all nonfiction. By exposing the strings and wires behind the show, he evinces humility instead of basking in an unexamined self-importance.

Lurie highlights Painting With John’s construction via minor, cheeky nods, as in the first episode, when we see him running through takes of his makeshift introduction. “Hello! Welcome to Painting With John,” he says, followed by a forced smile, only to correctly deduce that his smile frightens people. (He settles for making goofy noises.) Another episode features a scene in which Lurie tells Wolf and James, in a slightly jokey but possibly serious manner, that they don’t love him enough, much to their protests. Later in the same episode, he “clarifies” the tone of this exchange by replaying it with a laugh track. In the finale, Lurie addresses an off-screen Mockus to ask if a take was acceptable and then launches into a brief explanation of Painting With John’s filmmaking process, a natural culmination of the series’ meta impulse rather than a sudden fracture in the fourth wall.

“It’s a very strange thing to do, to talk into a camera like you’re talking to a person,” Lurie says in the third episode, noting that people who do it well are in all likelihood sociopaths. (“You can probably make a lot of money,” he admits, “but it’s not a good thing.”) Lurie’s general insecurity on-screen doesn’t manifest itself in overt ways, and yet, like an undercurrent, it subtly courses through the series. It comes through in scenes when he unleashes his inner child, horsing around like a kid left to his own devices, and in stories where he expresses his indifference toward celebrity, especially at the height of his cult notoriety. At one point, he urges the viewer to turn off the show or, at the very least, not to tell anyone about it. An uncharitable viewer could chock this up to affectation, but Lurie’s anxiety about being himself on-screen feels genuine, which makes his attempts to overcome it with stories and silly gestures compelling. Painting With John represents something of a sideways comeback for Lurie, who has been out of the traditional spotlight for reasons beyond his control, ones that help explain some of his discomfort about being on camera.

Lurie’s first TV series, the 1998 cult favorite Fishing With John, sports a similar sensibility to Painting With John but on a slightly larger canvas. Each episode follows Lurie and a famous guest as they embark on a fishing expedition in different parts of the world. The series’ central irony is that, despite its nature documentary aesthetic, neither Lurie nor his artist friends have any expertise in fishing. The comedy is delightfully strange, whether it’s in the banter between Lurie and his travel companion, their amateurish attempts to catch fish, or the gap between each episode’s epic voiceover (provided by acclaimed voice artist Robb Webb) and the utterly mundane footage of two people traveling, fishing, and sitting. In one episode, Tom Waits squeezes a fish down his pants. In another, Lurie and Willem Dafoe face starvation while ice fishing in Maine and “die” at the end of the episode. Fishing With John’s six episodes exhibit a hypnotic mood that stems from its observational bent and the pregnant silences between Lurie and guest, juxtaposed against the oft-soothing sounds of nature. A unique gem operating on its own wavelength, Fishing With John is one of the few TV series to be released by the Criterion Collection.

Painting With John is less a traditional sequel to Fishing With John than a companion piece. They share an absorbing rhythm and a similar rest-and-relaxation bent, as if the shows were a comfortable pair of shoes that a person could slip on whenever they choose. At the same time, Lurie adopts a smaller-scale, more earnest approach in the new series, one befitting his change in health and living situation. It works as a standalone piece whether you’re familiar with Lurie or not, but it takes on an extra dimension if you’re aware of his backstory, essentially operating as an extended update on his life in the intervening years. 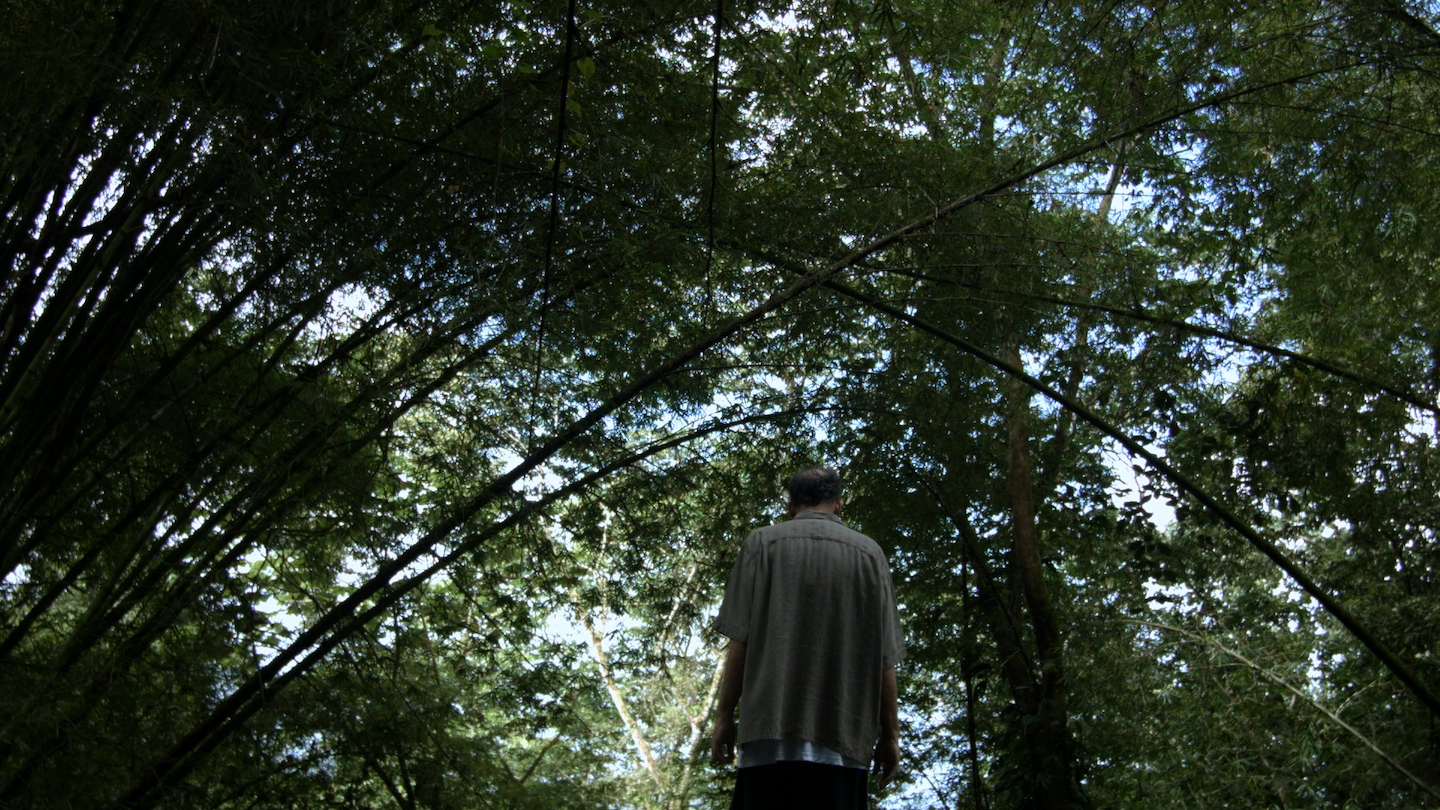 Though probably best known for his acting work—including starring roles in Jim Jarmusch’s Stranger Than Paradise and Down by Law, small yet notable parts in Martin Scorsese’s The Last Temptation of Christ and David Lynch’s Wild at Heart, and a stint on HBO’s Oz—Lurie was primarily a musician for many years. He was the saxophonist and cofounder of the avant-garde group the Lounge Lizards, a staple of New York’s downtown jazz scene in the 1980s and ’90s. He worked successfully as a composer for film and TV, even cowriting the theme song for Late Night With Conan O’Brien. In those years, Lurie personified a certain “New York cool,” largely due to his involvement with the Lower East Side’s No Wave scene, his deadpan affect, and his unconventional behavior, which seemingly embodied a stylish regional disposition of the era. While his profile rises and falls with the popularity (or timing) of his projects, Lurie has remained a cult favorite for over 40 years.

Around 2001, Lurie stopped playing music entirely because of his Lyme disease, with which he’d been struggling since the mid-’90s. The debilitating physical and neurological fatigue has prevented him from pursuing acting or music, so he took up painting to pass the time during a period in his life dominated by doctor visits and Law & Order reruns. His hobby soon filled the creative void, and eventually it became a full-time therapeutic activity that he now does for 10 to 12 hours a day. In a sense, Painting With John helps him bridge the public and the private spheres, allowing him to share his artistic passion with the world again after it was redirected from a performance medium to a solitary one.

Lurie doesn’t directly address his condition until the finale, when he says that he can only film an hour or two a day before his symptoms flare up. That specific disclosure casts a shadow across the previous five episodes, informing every scene with a potent subtext about his strength and vigor. Every story he tells, every scene of Lurie cracking wise or playing around his home, takes on new weight when you know that there was only a limited window of time for it to be captured. In one of the series’ most affecting scenes, Lurie praises Mockus for his work on the show. “This kid came down here and did this with me, and we pulled this off, as sick as I’ve been, and we’re just on the same page about everything,” he says earnestly into the camera. Almost immediately after delivering this tribute, he turns to someone off-screen and urgently calls for a fan to cool him off, as it’s clear he’s in some sort of distress.

Lurie and Mockus started filming Painting With John right around the time the pandemic started, and Lurie has been up-front about how he made it to cheer up his housebound viewers. He wanted to show people something calming and beautiful and funny as a counter to all the awful news over the past year. Painting With John fulfills that goal in spades, but it’s especially moving when you consider that painting serves as a lifeline for Lurie. The series illustrates how much the process engages him spiritually, how it’s a crucial outlet for his restless, ever-curious perspective. Lurie came to prominence by following his own creative whims and unconventional interests, regardless of whether the destination justified the pursuit. Painting With John distills that worldview once again, reformatted for a different time and to fit the new needs of a still-vital artist.