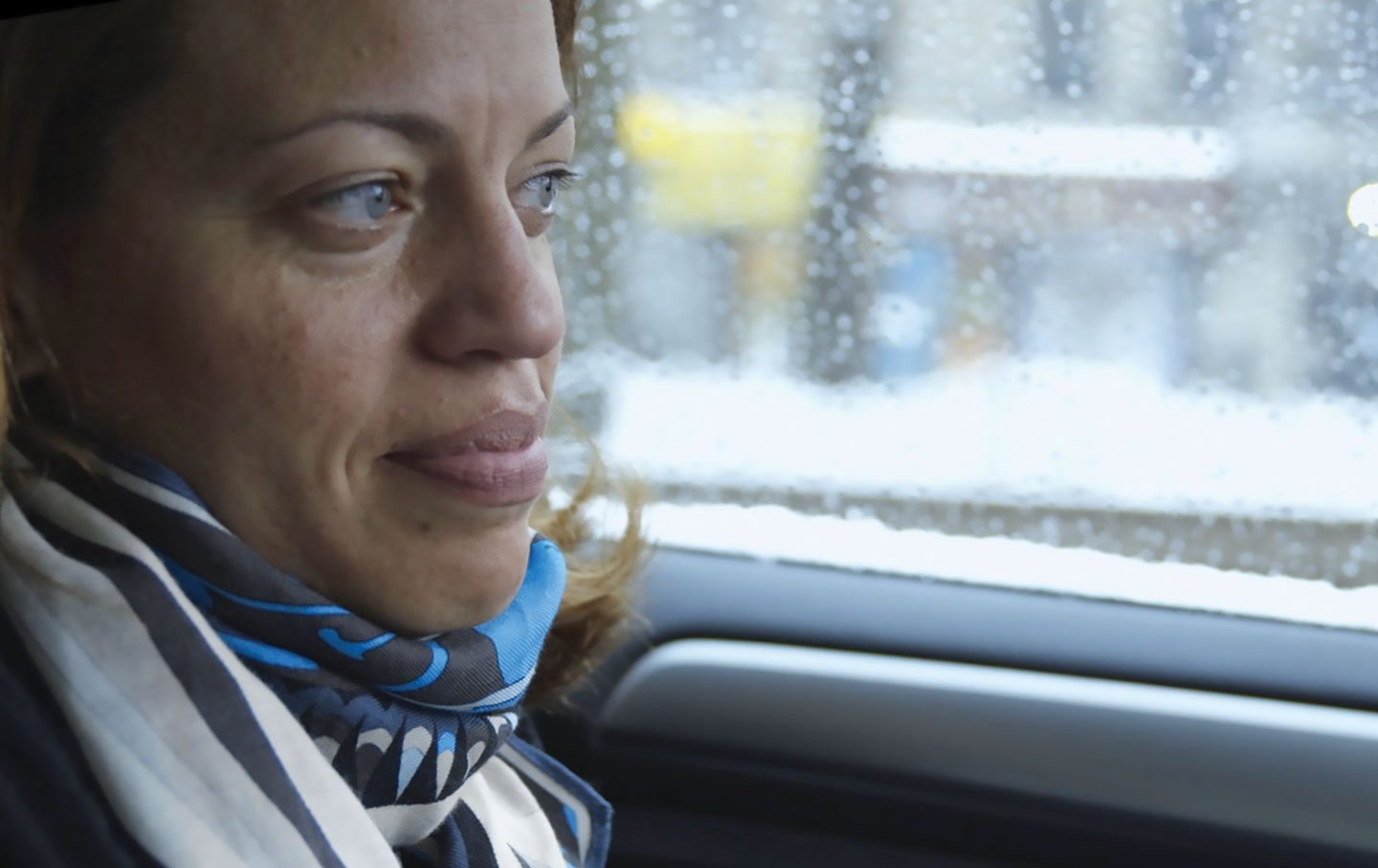 When accusing powerful men of sexual assault, women of color anticipate a higher burden of proof and a slimmer margin for error. On the Record seethes at this plight. In frank detail, the documentary recounts the multiple sexual assault and rape allegations against hip-hop mogul Russell Simmons and his accusers’ struggles to go public. Codirected by Kirby Dick and Amy Ziering, documentarians who previously chronicled sexual assault on college campuses (The Hunting Ground) and in the military (The Invisible War), the film uses the harrowing accounts of Simmons’s accusers to examine Black women’s double jeopardy when it comes to making such accusations. Drew Dixon, who once worked as an A&R executive at Simmons’s famed Def Jam label, serves as the film’s lodestar. She was interviewed before, during, and after she agreed to participate in a New York Times story on the accusations against him, and her difficult choice to go on the record becomes the heart of the film.

In content and form, On the Record departs from the growing catalog of exposés on sexual abuse in the entertainment industry. Whereas works like Surviving R. Kelly and Leaving Neverland are organized around the tabloid allure of mighty figures plummeting from grace, On the Record holds Simmons at a distance, focusing on his alleged actions rather than his mythos. When he does appear in photographs and archival footage, his behavior and demeanor are mostly casual and unexceptional. Instead of a uniquely monstrous figure, he comes across as an archetypal workplace harasser. No matter how extraordinary a life Simmons has led or how critical he has been in turning hip-hop into a global force, in On the Record, he’s just a sexual predator.

The willingness to depict Simmons in this fashion elevates the film from true crime to something more probing. As On the Record helps give voice to the women’s stories, it also becomes clear that for Black women in particular, the public and the record are fraught resources. While the film, frustratingly, never defines what “on the record” means for journalism, it excels at laying out the mental calculus women perform when choosing between silence and disclosure. For the women in this film, to seek accountability is to risk victim blaming, professional retaliation, and ugly accusations of betraying the Black community, outcomes that many of them expect even in the age of Me Too. As a result, the case of Simmons—who now has 20 named accusers, as well as a documented history of harassment at his yoga studio—calls on us to build new systems of accountability and to question the existing ones.

Before landing at HBO Max, On the Record faced a vexed path to release. The film was originally supposed to be distributed by Apple’s streaming service, Apple TV+, with Oprah Winfrey as its executive producer, but two weeks before its premiere at the Sundance Film Festival, Winfrey and Apple dropped out of the project. In a statement to The Hollywood Reporter, Winfrey said, “In my opinion, there is more work to be done on the film to illuminate the full scope of what the victims endured and it has become clear that the filmmakers and I are not aligned in that creative vision.” A week later it was reported that she had been lobbied to abandon the film by Simmons himself as well as by his supporters, among them 50 Cent, who suggested that Winfrey had a vendetta against Black men because of her support for Leaving Neverland, which recounts the sexual abuse allegations against Michael Jackson. It was also reported by The New York Times that before Winfrey’s departure, she was uncertain about whether Dick and Ziering, who are white, “captured the nuances of hip-hop culture and the struggles of black women.”

By detaching itself from Simmons’s legacy, On the Record centers the women’s stories. Alongside Dixon, the activist and former model Sil Lai Abrams and the author and singer Sheri Sher speak about their encounters with Simmons. Each woman recalls the professional and personal consequences of her alleged assault, how workplaces and intimate relationships became poisoned as a result.

The film gives the most time to Dixon’s derailment. After her alleged assault, she quit her job at Def Jam despite her quick advancement there, which had been painful, she says, because Simmons harassed her throughout her employment. She found another position at Arista Records for a few years, but after the man who hired her left, his replacement, L.A. Reid, harassed her as well, she says. (In 2017, Reid left his position at Sony Music after her accusations against him came to light.) That Dixon’s work experience was one of recurrent harassment is an indictment of not merely the perpetrators but the recording industry as a whole.

The symmetries in the women’s accounts are as powerful as the individual tellings. Abrams, like Dixon, left the fashion industry after her alleged assault, and Sher, a member of the pioneering all-women rap group Mercedes Ladies, found herself clearly conflicted. Because Simmons was funding the group’s demo, making her accusations against him public would mean potentially sabotaging Mercedes Ladies’ chances for success. Those kinds of power imbalances played into Simmons’s behavior, which allegedly often involved luring women to his apartment to discuss their careers.

While detailing the accusers’ stories, Ziering and Dick zoom out to consider the wider context of hip-hop during Simmons’s reign. In the film’s telling, the machismo that drove much of hip-hop’s ascent in the late 1980s was couched in a sense of Black power and Black cool that implicitly excluded women, laying the groundwork for casual and explicit misogyny. The film does not scapegoat rap, however, and in a punchy montage linking rock, blues, and punk songs, the filmmakers make it clear that misogyny is a music problem, not just a rap problem. Rather than putting hip-hop on trial, On the Record is interested in exploring Black women’s particular stake in the genre as listeners and participants and, in the case of Simmons’s accusers, as workers.

The film’s commentators widen that view even further. Through interviews with experts like Tarana Burke, the activist who helped start Me Too; the cultural critic Joan Morgan; and the legal scholar Kimberlé Crenshaw, the film connects the dismissal of Black women’s accounts of sexual assault to slavery, police brutality, and Eurocentric beauty norms. The interviews also describe the tightrope that many Black women walk when it comes to sexual crimes perpetrated by Black men; they know that to point to the Mike Tysons and Bill Cosbys of the world can also invoke the specter of the Emmett Tills and Mack Charles Parkers. Between the grim history of such crimes being trumped up and falsified by racist fears and the grim reality that they do happen, Black women are left adrift. They feel as if they are forced to choose their community or themselves, with neither choice ensuring their safety and both being unfairly restricted.

Dixon in particular notes that the public censures of Anita Hill and Desiree Washington informed her decision to remain silent about her accusations—a comparison that communicates not only how much power Simmons wielded at the time but also how one miscarriage of justice has consequences for others. The film would have benefited from digging further into the history of conflicts between Black men and women. From former Black Panther Elaine Brown leaving the party over its internal chauvinism to rapper and reporter Dee Barnes getting disparaged by N.W.A for going public about her alleged assault by Dr. Dre, the precedent for Dixon’s experience runs deeper than the movie suggests. Despite this, however, the film’s overall message is clear. When deciding how to handle their alleged assaults, Simmons’s accusers found themselves caught in an impossible place.

Almost every Black woman who participates in the documentary describes a forced self-reliance due to the history of Black women being silenced. On the Record concludes that this outlook is born of the sad reality that Black women’s pain rarely has an audience, even in Black communities. The film opens with many of its participants expressing an alienation from Me Too as it gained momentum, and that anxiety resounds every time a Black woman appears on the screen, culminating with Dixon asserting, “I am a living crime scene.” Her statement channels the mantra of activists who protested the national backlog of rape kits and the historic erasure of Black women’s personhood.

In these moments it becomes clear that On the Record necessarily has different goals from the directors’ previous work. Institutional hypocrisy has long been Dick’s focus, from his meticulous critique of the Motion Picture Association’s flawed rating system in 2006’s This Film Is Not Yet Rated to the skewering of the Food and Drug Administration in The Bleeding Edge, his 2018 study of the poorly regulated medical device industry. Whereas these earlier films proposed some kind of institutional reckoning or at least exposed the systemic flaws that prevented one, On the Record’s ambit is depressingly more diffuse. Black women have been failed by numerous institutions—workplaces, police departments, courtrooms, and the press—driving home the infuriating sense that their only resource is themselves.

On the Record ends with Dixon cautiously navigating life after coming forward. Newly divorced, seemingly considering a return to making music, and now acquainted with fellow survivors from the film, she has obviously been changed by her disclosure. What resonates in the aftermath of her experience is that neither she nor the filmmakers attempt to fit these shifts into a tidy frame. Rather than retribution or empowerment or resolution, Dixon expresses gratitude—to herself and to the women who helped her tell her story. The relief in that tiny thank-you is fleeting, and the herculean effort it took to make it possible is damning, but that’s the film’s gutting last impression. If this is the reward for challenging powerful men, what does it say about the punishment?

Correction: A previous version of this article originally stated that On the Record went through multiple cuts as a result of Oprah Winfrey’s concerns regarding the filmmakers’ knowledge of hip-hop and Black history. This piece has been updated.
Keep Reading
Ad Policy