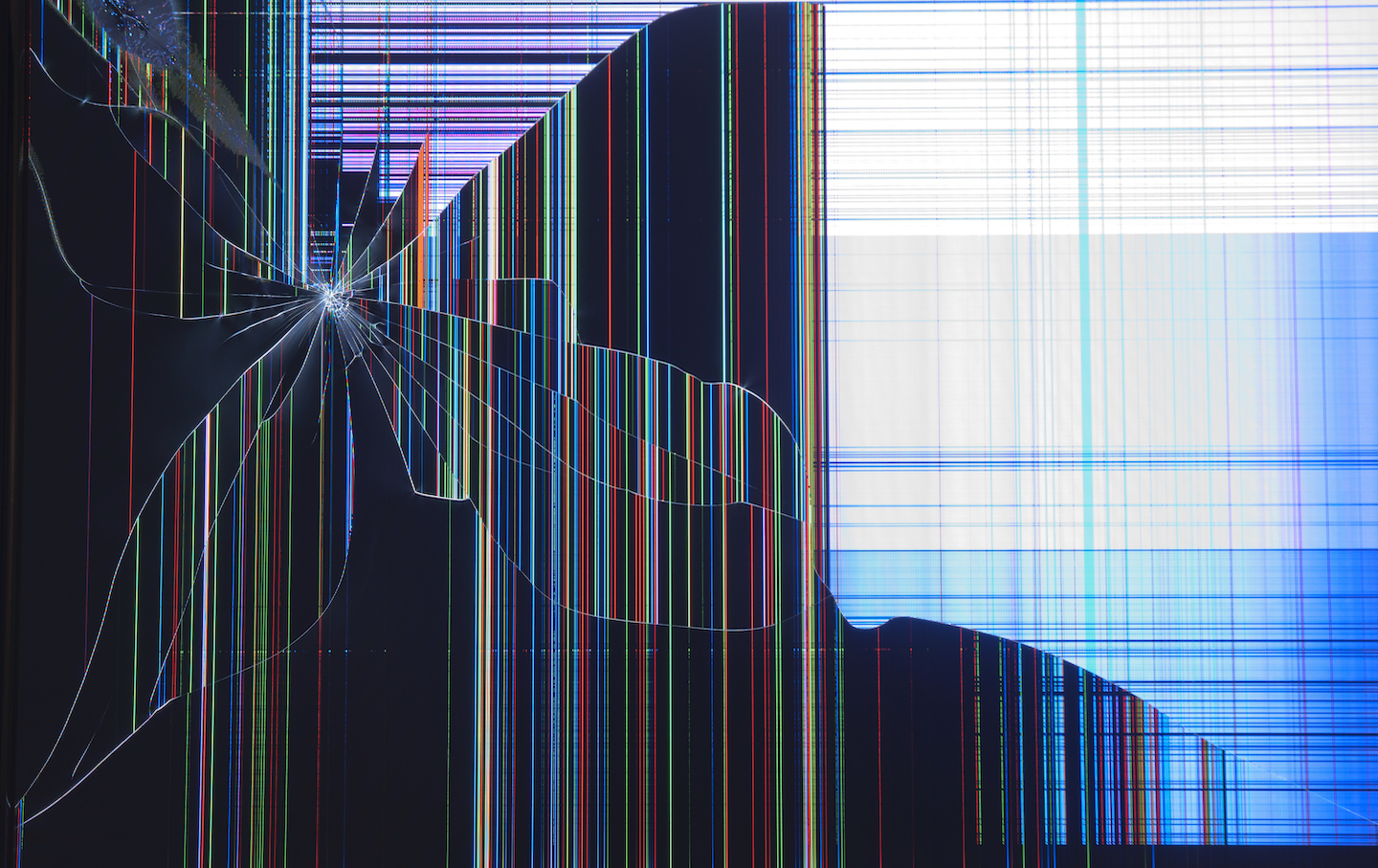 Television with a cracked LCD screen. (Photo via Getty Images)

It’s strange to read a book in one world and write about it in another. I first read Mary South’s prescient and unsettling debut story collection, You Will Never Be Forgotten, a few weeks ago, in a world where the streets were busy, the bars were heaving, and the skies were full of planes. You might, in that world, catch up with a friend over dinner at a busy restaurant; you might stand in a chaotic huddle of strangers, waiting to be seated. You might visit your parents or your grandparents on a whim, hugging them close when you arrived. You’d spend your day hopping back and forth between the physical and the virtual, your mind a tangle of social feeds and the on-the-ground, natural chaos of the city you moved through. Technology was a convenience enhancer at best but more often a vice, something you half-joked about being “addicted” to, something you were always trying to “detox” from, something you thought you’d be better off without—calmer, less anxious, more present.

You Will Never Be Forgotten: Stories

You Will Never Be Forgotten reads like it was written for the world we’ve just entered, a liminal space between the dysfunctional, false glut of the past and an unknowable, emaciated future. Over recent weeks, we have become increasingly dependent on the same technologies so many of us have spent years criticizing for their dehumanizing effect. Social media websites in particular have gone from a favorite punching bag to a vital lifeline for those of us in isolation. Now and for the foreseeable future, technology’s commodified and surveilled virtual landscape forms the primary site of human connection.

You Will Never Be Forgotten is set in a recognizable, barely exaggerated near-reality, blending yesterday’s tech-induced indignities with those yet to come. South demonstrates, across 10 stories, how dependence—coerced or chosen—always comes with a cost. Our current, surreal moment of virtual reliance is no exception. South writes as though she has always been where we find ourselves now: looking back on a world where we believed we might gain personal agency over technology’s dominion, entering one where such agency is a luxury we might never again hope to afford.

South’s stories are, without exception, stories of exceptional loss, spilling out at the point of conflict between the cool detachment of the technological world and the tender vulnerability of the users living within it. In some of these tales, technology sets the tone but does not drive the action. In “The Age of Love,” a young, overworked flight attendant finds emotional fulfillment in graphic phone sex with an impotent octogenarian, after her elder-care-worker boyfriend begins playing her recordings of his charges’ phone-sex-hotline calls. To one person, this illegal surveillance is an act of violation; to another, an opportunity for fresh intimacy. In other stories, like “Keith Prime,” techno-dystopian capitalism plays a more direct role in the action: A widow, impoverished by her deceased husband’s medical bills, works at an organ warehouse, where she develops feelings for one of the lab-grown bodies in her care. Widows, care homes, and ghosts abound, Petri dishes where South examines the aftershock effects that technology has had on the ways we look after each other and ourselves.

In an era of unprecedented digital acceleration and societal fragility, speculative fiction often offers a clear-eyed assessment of the present. You Will Never Be Forgotten joins a growing cross-medium genre that includes Catherine Lacey’s The Answers, Ling Ma’s Severance, Russell T. Davies’s Years and Years, and the subtler episodes of Charlie Brooker’s Black Mirror, a genre that we might call “dystopic realism,” marked by the imaginative quality of science fiction, the pacing and recognizability of realist fiction, and the nauseating bite of satire. Like other dystopic realist fiction, South’s stories find their momentum in the usual, unwieldy mainstays of human experience, caught at a glance. Grief comes up again and again, tinged with humiliation, jealousy, and lust. This collection’s power, though, comes from South’s dark sensibility, her comfort with brutality, and her narrative insistence that, while the nightmare of tech capitalism won’t wholly eradicate the personal and the private, it will compress beyond recognition the spaces where personal, private moments can unfold.

In a sense, we’re living in those compressed spaces now; we’re grateful for them, even. But how do we continue to critique the numbing force of technology when technology has become our only means of communication and connection? South writes with the assurance of someone who knows she has no answers to give. But instead of resulting in a shrugging ambivalence, You Will Never Be Forgotten mounts an ever more effective critique of technology-amplified structural inequality. Workers, in these stories, are stretched thin by the demands of their jobs; the wealthy are riddled with delusions that keep them from complete self-destruction; a culture of widespread surveillance, bogus anonymity, and optimization form the backdrop against which every action is set.

You Will Never Be Forgotten’s stories are united by South’s keen examination of the thrill and risk of human connection—between lovers, siblings, parent and child, care-giver and care-receiver, and digitally connected strangers—under increasingly cruel conditions. In the midst of it all, against the logic of an economy pressing us toward hard, numb efficiency, South’s stories insist on tenderness as both a liability and a key to survival, a sensitivity that feels like weakness but, like a bruise, shows what we are capable of surviving. 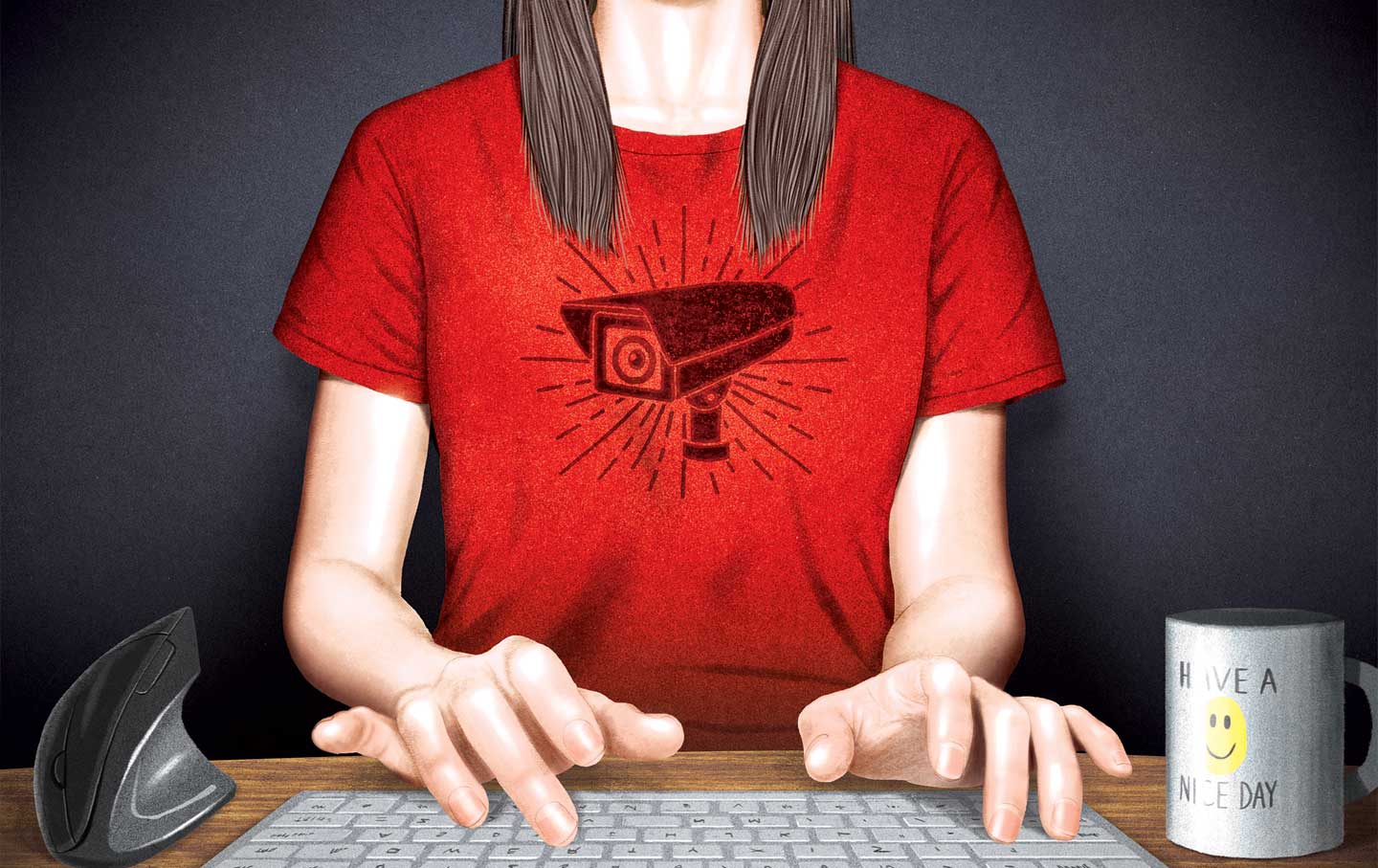 “Keith Prime,” the first, tone-setting story in You Will Never Be Forgotten, drops the reader into the logical end-point of commoditized health services: a warehouse full of artificial wombs, where identical human bodies—called “Keiths”—are incubated, birthed, and aged in a comatose state. The young, widowed warehouse worker and her colleagues tend to the Keiths as they grow, eventually readying them to have their organs harvested. Keiths are selected and broken down for parts with no more fanfare than an econo-pack of toilet paper is plucked from the shelf of an Amazon warehouse. The worker, who has lost her husband and her financial security to the twin ravages of terminal disease and American health care costs, develops a soft spot for one of the Keiths, “Keith with a mole.” When he unexpectedly wakes up from his perpetual induced slumber, her employer asks her to act as his temporary guardian. At home, “Keith with a mole” stutters nonsense words, embraces the worker with the chastity of a eunuch, and excretes in her potted plants. Physically, he’s a grown man, but developmentally, he is a toddler. This Keith becomes a kind of blank, willing slate on which the worker projects her grief and her regret. When the warehouse demands Keith-with-a-mole be returned, the worker kills him gently, using a stockpile of morphine left over from her husband’s illness.

The same themes—dehumanization, dependence, and loss—are repeated throughout You Will Never Be Forgotten’s 10 stories. In the collection’s funniest and most stylistically playful story, “Frequently Asked Questions About Your Craniotomy,” a husband’s suicide warps his wife’s attempts to write an FAQ section for her hospital’s website. In “The Promised Hostel,” a woman who has lost her baby serves her breast milk, straight from the boob, to the love-starved and stunted man-children staying at a cheap Meditteranean hostel, making literal one of South’s lessons: That which relieves us can set us into unending cycles of need and relief; the human goodness we show to others may be met with nothing but manipulation and hunger. And in the collection’s closing story, “Not Setsuko,” a mother attempts to re-create the spirit of her dead first daughter (Setsuko) in her still-alive second child (also named Setsuko), by painstakingly re-creating every major emotional event in the first Setsuko’s life, up until her rape and murder on her ninth birthday. It’s a heartbreaking idea, one that is not exactly reliant on technology but inevitably shaped by technology’s promise: that every action and impulse could, in perfect conditions, be captured and replicated.

These are ghost stories, pitched for a world in which there is an endless scroll of losses to mourn. By perpetually setting her characters in moments of grief and devastation, South risks exhausting her readers. There is little possibility of catharsis—the best South’s characters get are moments of fleeting, fever-breaking relief. At the same time, she balances her characters’ grim lives with moments of sharp, absurdist humor. In “Realtor to the Damned,” a real estate agent texts his deceased wife’s phone number, hoping for a response from the beyond. He sends a dick pic when he receives a reply, desperate enough for connection that he half-believes it might be from her ghost. His interlocutor eventually has to spell it out for him: “Guy, I got a new plan, and my carrier randomly assigned this number.” Her characters fall down tantalizing rabbit holes only to hit, again and again, a brick wall. South effectively captures the guiding principles of the Internet: instantaneousness, the illusion of infinity, and the feeling that our actions are being mysteriously tracked, analyzed, and understood by forces unseen. She illustrates, too, the way these principles have warped our brains, making us snarkier and more skeptical, while simultaneously turning us into stimulation addicts, our better judgment perpetually lagging behind our attention span.

South’s stories offer scant opportunities for human-to-human connection without a transactional premise. In the collection’s titular story, a woman obsessively tracks the online and IRL movements of her rapist, a celebrated entrepreneur. In her day job, she works as a content moderator at a global search engine, screening the Internet for beheadings, child pornography, first-person videos of mass shootings, and other violent visuals. It’s the kind of thankless, underpaid, traumatizing work upon which the digital and gig economies run. The woman does her work quietly, quickly, all the while thinking about her next opportunity to digitally or physically follow her rapist. Her obsession escalates into a moment of devastating humiliation, a private shaming that risks going public. The story’s ending is both inevitable and affecting; again, there is no true catharsis here, and no attempt at justice goes without undesired consequences.

Yet I wouldn’t call this collection pessimistic or even particularly sad. Troubling, yes, but shouldn’t we be troubled? Increasingly, our humanity is required only where it can be performed or put to productive use. The profit motive mandates that what can be automated will be done by machines; the human touch is an artisanal flourish, a premium feature that must be worth its price. South’s stories develop like thought experiments: What happens when the next aspect of society gets commodified and stripped for parts? How do we build a meaningful vision of the future when the new normal just keeps getting worse?

Still, You Will Never Be Forgotten shows us there is still tenderness to be found, and protected, in the brave new world to come. But unlike visions of the future that show love or empathy or some other kind of schmaltzy, indelible humanity triumphing against the monstrous powers that be, South cuts to the chase. If we continue on this track, if we rely on individual goodness to get us safely through, we will find ourselves pressed up against on every side by cold, market-fueled greed. Tenderness will not be enough.