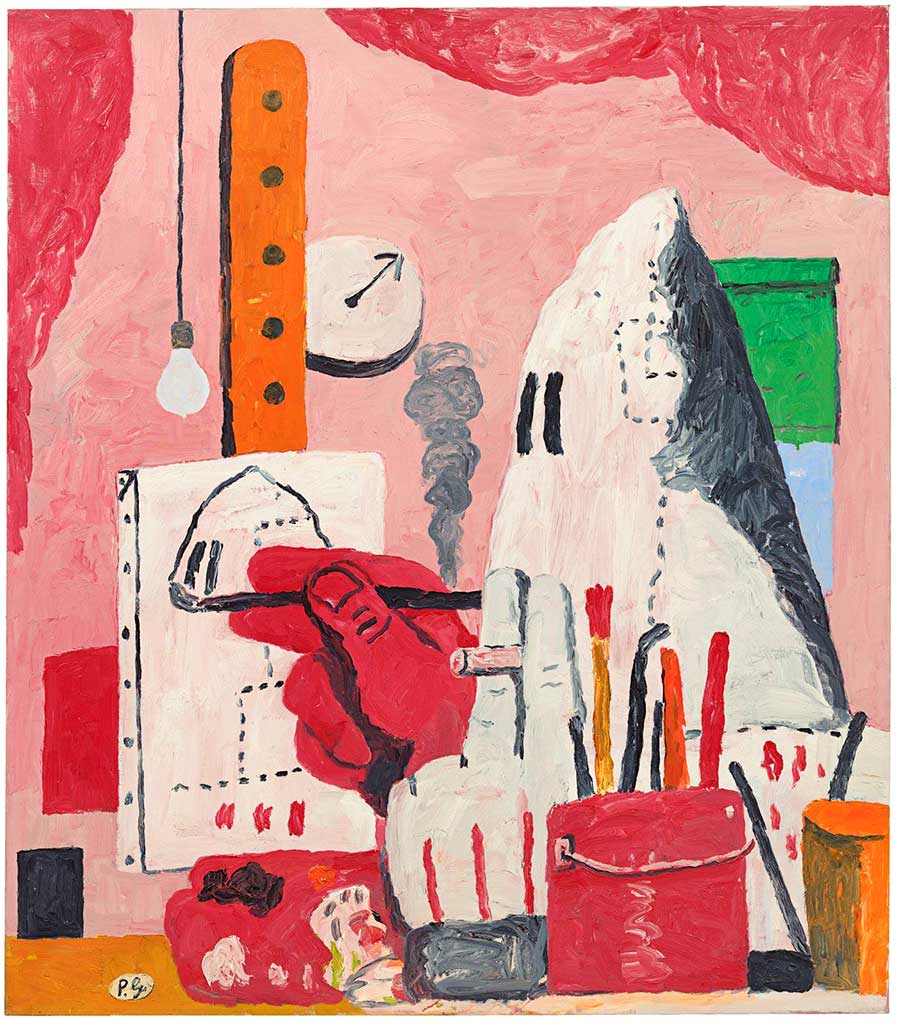 Philip Guston didn’t want his work to go down easy—with others or, above all, with himself. He felt himself to be one of those who, as his friend Willem de Kooning put it, was “too nervous to find out where they ought to sit. They do not want to ‘sit in style.’” Having once, like many of his generation, tossed aside figurative art and found success in abstraction, he was still unhappy. Toward the end of the 1960s, “sick and tired of all that Purity,” he betrayed abstraction (so most of his colleagues thought) and forged a new approach to painting: funky, demotic, blunt. A critic in The New York Times dismissed him as a mandarin masquerading as a stumblebum. Among the paintings he made in this later phase were images of hooded Ku Klux Klansmen. Sinister yet unfrightening, these stumblebums were reminiscent of the Klansmen that Guston saw and painted as a young man. He remembered how, in the Los Angeles of his youth, they were deployed to break unions in an alliance with the police.

So for Guston, who died in 1980, painting the Klan was a gesture of protest, though when he turned to the theme as a mature artist, it was also a kind of self-portraiture. “I perceive myself as being behind a hood,” he said and referred to one of his favorite writers. “Rather like Isaac Babel who had joined the Cossacks, lived with them and written stories about them, I almost tried to imagine that I was living with the Klan. What would it be like to be evil?” I think of something that Paul Gauguin (an artist who was not a reference point for Guston, however) wrote in his journal: “We never really know what stupidity is until we have experimented on ourselves.”

That brings us back to the National Gallery, which announced that it and three other museums would postpone a long-planned Guston retrospective “until a time at which we think that the powerful message of social and racial justice that is at the center of Philip Guston’s work can be more clearly interpreted”—that needful time being foreseen as 2024. The gallery’s director, Kaywin Feldman, could not quite bring herself to articulate why this delay was necessary or what use it would serve, but mortification over Guston’s Klan imagery was evidently the reason.

I probably shouldn’t put the onus on Feldman. Directors serve at the pleasure of their boards, and among the leading members of hers is Darren Walker, the head of the Ford Foundation, with its $13 billion endowment—a foundation that does much good, and it had better if it’s going to keep making up for its cofounder Henry Ford’s terrible legacy of anti-Semitism, which he eventually recanted. Walker has been the most vocal proponent of the exhibition’s postponement. Strange irony: The caretaker of the legacy of the young artist’s enemy becomes the opponent of his posthumous exhibition.

Never mind that Walker cannot distinguish between racist imagery and imagery depicting racists. The real tell is that in a statement he said that to mount the exhibition now would have been “tone deaf.” That’s the language of corporate image control. To many of the people who run our museums—not art people but bean counters—art is merely branding for the institution.

That indifference to art and therefore to the sometimes difficult and contrary people who make it was made clear in the museums’ haughty unwillingness to acknowledge the call by many of the country’s leading artists for the Guston show to open next year as scheduled. That letter, drafted mainly by me, with advice from several others and precious editorial input from Adrian Piper, was posted by The Brooklyn Rail on September 30, with some 90 signatories, including critics, curators, historians of art, collectors, dealers, choreographers, poets, and above all, some of the most renowned artists at work today: Matthew Barney, Mel Chin, Nicole Eisenman, Charles Gaines, Ellen Gallagher, William Pope.L, Martin Puryear, Amy Sillman, Lorna Simpson, Mickalene Thomas, Rirkrit Tiravanija, Stanley Whitney, and of course, Piper, to name just a few. More than 2,600 people have subsequently signed the letter.

One artist who didn’t sign it is Cauleen Smith. Her response to the letter was sympathy with pointed questions: “Are all white artists going to hide behind Guston now? A more urgent and pressing question is why is there so little work like this? Work that addresses white culpability in sanctioned violence against non-whites?… Why is dismantling whiteness and its violences so hard for white artists? Can one painter dude really redeem all ya’ll? I do not think so.” Me neither. No more than we hide Guston away should we hide behind him.

Feldman said we don’t need “a white artist to explain racism.” She’s right. Giving explanations is not what paintings are for. More to the point, do we need white museum directors—especially ones who can’t even bring themselves to mention the KKK when it’s what they want to talk about—to explain it?

Guston saw his Klansmen as “dumb, melancholy, guilty, fearful, remorseful, reassuring one another.” Sounds like the scene inside the National Gallery right now.

Update: On October 28, after this article went to press, the National Gallery announced that its Guston exhibition would open in 2022. The museum’s spokeswoman, Anabeth Guthrie, told The New York Times that the rescheduling had nothing to do with the criticism occasioned by the sudden delay. Rather, she blamed complications arising from the coronavirus pandemic without explaining how 2022 would be less complicated than either 2024 or the previously announced date of 2021. Nor did she mention anything about the desire, expressed by the museum’s director in September, to wait for a “time at which we think that the powerful message of social and racial justice that is at the center of Philip Guston’s work can be more clearly interpreted” or the need to “bring in additional perspectives and voices to shape how we present Guston’s work to our public.” Notwithstanding this bureaucratic reticence, the museum’s backpedaling on the show’s postponement is a victory for the thousands of artists, critics, curators, and just plain art lovers who spoke up.