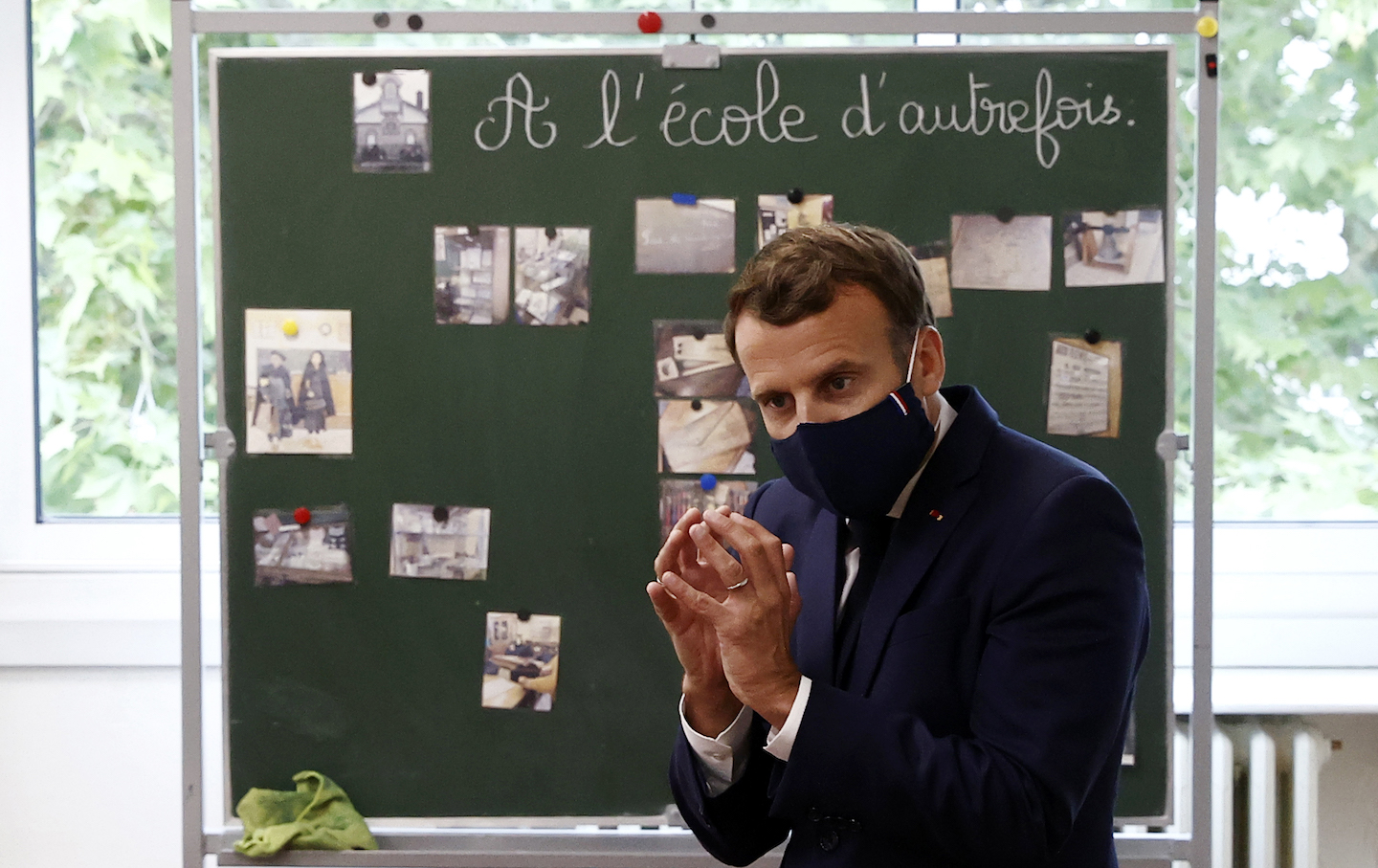 Ever since Emmanuel Macron’s improbable ascent to the French presidency in 2017, admirers have sought to portray him as a defender of Europe’s liberal values—a rampart against the temptations of populism in an increasingly unstable world. That narrative was always debatable, but never before in the course of his presidency has it appeared as empty as it does now. Over the past few months, Macron and his party have been trampling all over basic liberal values as they seek to make political gains.

The latest one to fall by the wayside is academic freedom. After going on a far-right news network to bash the supposed scourge of “Islamo-leftism” corrupting French universities, Higher Education Minister Frédérique Vidal has vowed to launch an investigation into research practices. It’s still unclear what the study will look like—or even how seriously it will be taken—but no matter what, it doesn’t bode well. A staunch critic of postcolonial studies and the idea of intersectionality, Vidal told Parliament her goal was to distinguish “academic research” from “activism and opinion.”

Not everyone within Macron’s party, La République en Marche, is on the same page. Government spokesman Gabriel Attal has said the question of “Islamo-leftism” is “marginal” and insists authorities are focused on more pressing concerns like how students are coping with the economic crisis. Still, Education Minister Jean-Michel Blanquer—who oversees nursery schools through high schools—has himself previously warned of the perils of “Islamo-leftism” and called to fight what he calls “an intellectual framework from American universities” ostensibly undermining French universalism. Meanwhile, Interior Minister Gérald Darmanin, arguably the most conservative cabinet member, has defended Vidal as she faces calls to resign. Most importantly, Macron has signed off on all this: Vidal serves at his discretion and the president evidently has her back.

The notion that the French state would bolster academic freedom by enhancing oversight of what is and what is not considered appropriate research is ludicrous on its face. But there’s a deeper irony to all this. In the name of defending the French academy from pernicious US influence, Vidal and company are engaging in precisely the sort of culture war that American conservatives have perfected to an art form. They just happen to be about a couple decades behind. While the witch hunt against campus radicalism in the United States peaked in the 1990s and early 2000s, the French culture warriors have only now picked up the dubious cause.

Until now, “Islamo-leftist” was not a term that was used very frequently by anyone. Political scientist Pierre-André Taguieff coined it in the early 2000s to refer to pro-Palestine demonstrations that brought anti-capitalists and conservative Muslims together in the streets, but it later evolved into a catch-all insult favored by France’s growing far right. As many others have also noted, the term invokes a long legacy of combining anti-leftism with racism, going back to such phrases as “Judeo-Bolshevik” and “Judeo-Masonic” in the 1920s and 1930s.

To French ears, it’s jarring to hear government ministers talk like this. And it’s all the more alarming in the country’s security-obsessed political context. Last month, the National Assembly, led by Macron’s party, approved a law designed to “reinforce Republican principles”—a proposal that claims to tackle the spread of Islamism as a result of home-schooling and tightens controls on groups receiving public subsidies. It now heads to the Senate, which is already slated to take up a separate “general security law” later this month. Bowing to protests, Macron’s party has promised to rewrite that bill’s most controversial measure: a reform of the country’s foundational 1881 press freedom law that would penalize the sharing of images of police officers with up to one year in prison and a €45,000 fine if the intent is to “harm” the agents in question. Still, even without that section, the security bill contains measures that would infringe on privacy rights, providing a legal foundation for law enforcement to expand the use of drones and expanding the use of police body cameras that would be authorized to broadcast in real time to police command posts. 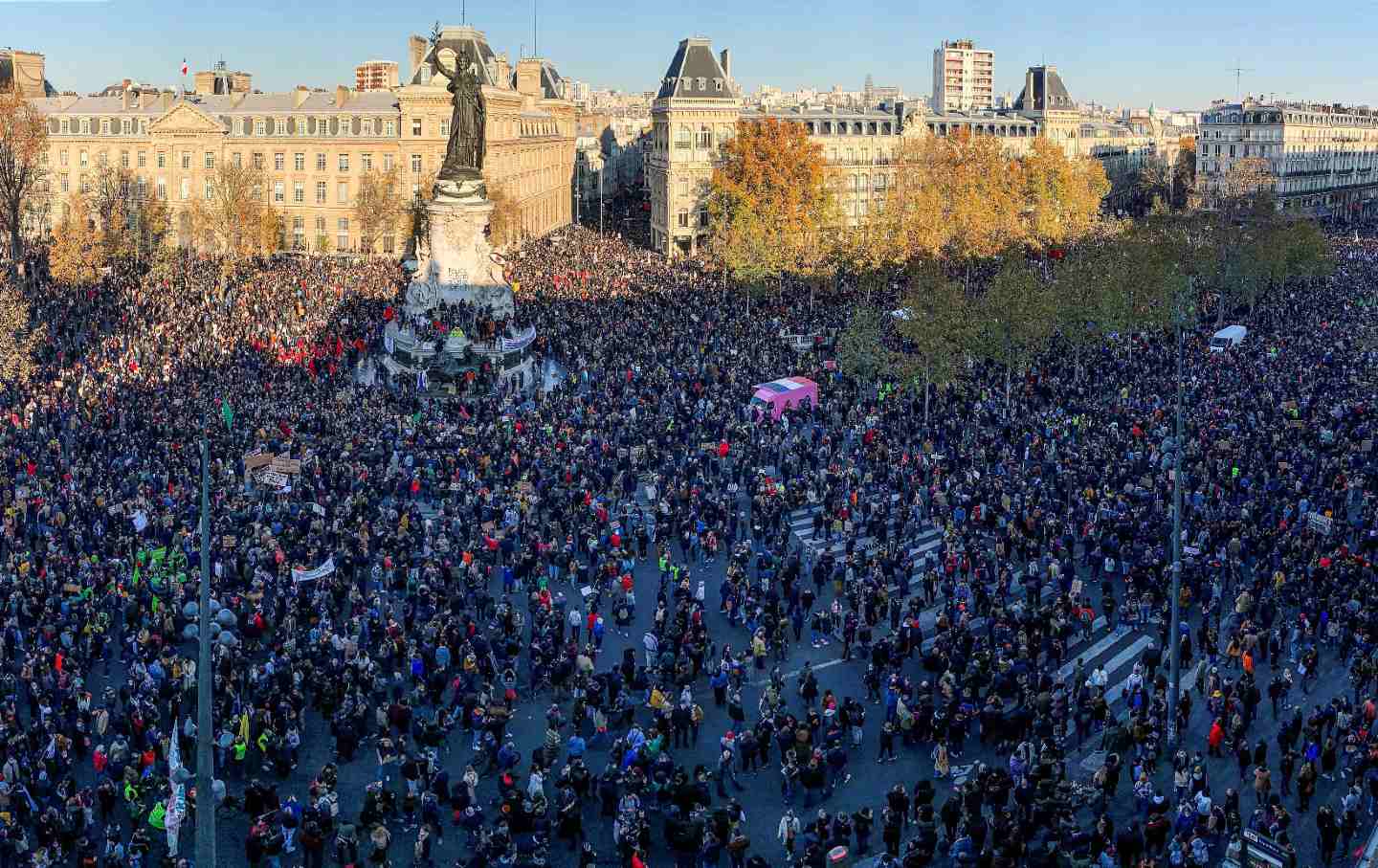 How did this happen? Where did the golden boy of Euro-American liberalism go wrong? As one follows the recent events, it becomes clear that Macron may always have had more of an authoritarian streak than his admirers cared to let on—it just seemed to trigger less backlash when applied to the economy. One of Macron’s earliest reforms was a sweeping pro-employer overhaul of labor law, approved by executive order to avoid a messy debate in Parliament. The rules made it easier for companies to lay off workers and imposed new limits on payouts for unjust job terminations while weakening the scope of sector-wide labor agreements. Last year, Macron’s cabinet signaled its intent to green-light an unpopular overhaul of the pension system by using another arcane constitutional maneuver that allows governments to sidestep standard parliamentary procedure—though the move has been on hold since the Covid-19 crisis took center stage. Now that he and his party have directed their efforts to culture and civil society, that willingness to pursue their agenda at all costs is even clearer.

Another key feature of Macronism is its ideological malleability—either an asset or a crutch depending on whom you ask. In the 2017 elections, that meant occupying the center and tapping into a small but solid base of socially liberal, pro-business voters; as the 2022 race approaches, he and his advisors have decided a hard-right turn provides the surest path to political survival. Anticipating a second-round rematch against Marine Le Pen of the far-right National Rally, Macron has sought to flex his muscles on themes of interest to conservative voters like security, national identity, and immigration—a pivot that was planned as early as 2019, well before last fall’s terrible wave of terror attacks. This strategy is designed to eviscerate whatever candidate is nominated by the mainstream right Les Républicains in the first round and put Macron in a strong position to defeat Le Pen in the runoff.

Of course, this grand plan takes for granted the weakness of France’s badly divided left, which is splintered between a center-left pole made up of Europe Ecology—the Greens and the Socialist Party and a more populist faction anchored by the La France Insoumise (LFI), as well as the Communists and various other far-left parties. They now find themselves on the back foot, having to defend the republic’s liberal values against liberals. It may seem like a long shot today, but in the event that a left-wing contender—such as LFI’s Jean-Luc Mélenchon, Socialist mayor of Paris Anne Hidalgo, the Greens’ Yannick Jadot, or someone else—shows signs of sneaking into the runoff round of next year’s election, hysterical warnings of “Islamo-leftism” seem all but fated to return. As Vidal and anyone else who’s toyed with this sort of dangerous rhetoric understand, the term doesn’t need to have a clear definition to be politically effective.