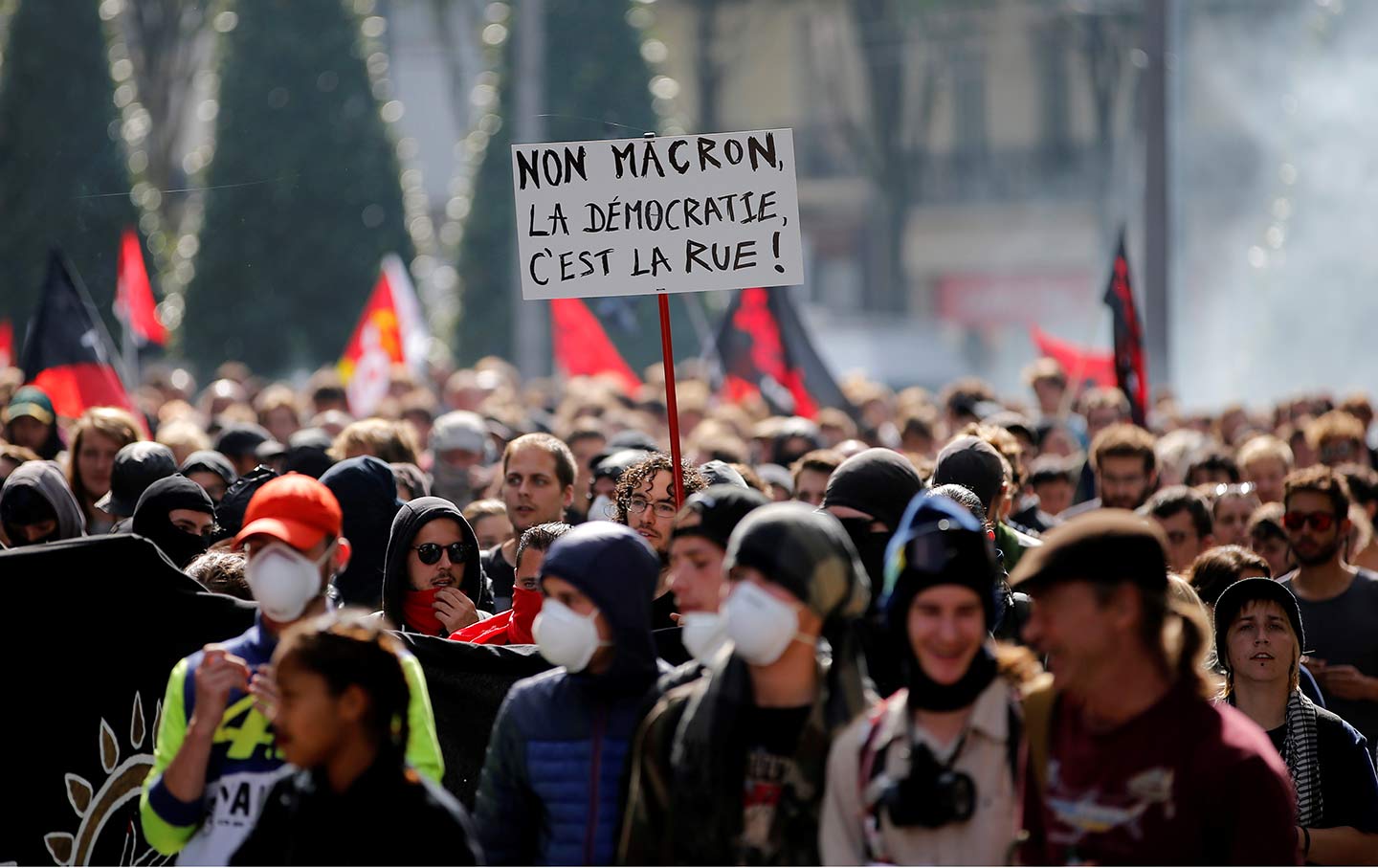 A protester holds a placard that reads, “No Macron, Democracy is the street” during a demonstration against the government’s labor reforms in Nantes, France, September 21, 2017. (Reuters / Stephane Mahe)

Give him credit for consistency at least. Amid all the equivocations shaping his career, French President Emmanuel Macron has remained singularly committed to the cause of remaking labor law to favor employers. Since his Socialist predecessor, François Hollande, appointed him economy minister in 2014, the former investment banker has repeatedly argued that France must reform its labor code along pro-business lines in order to boost job growth. And on August 31, his recently elected government unveiled a long-awaited proposal to do so.

As Macron’s prime minister, Edouard Philippe, put it, the reforms are a “necessary” tool to reduce unemployment, which currently stands at 9.5 percent. If this is the goal, success may be partial at best. Similar efforts in the world’s most highly developed countries have cast doubt on the supposed link between labor deregulation and job growth.

But even if they do bring down unemployment, the reforms are likely to be overshadowed by the grave consequences at the workplace and damage to the country’s social fabric. At their core, the proposed changes weaken unions’ collective-bargaining rights and make it easier for companies to lay off workers. This would only exacerbate growing working-class disaffection from politics—a situation that culminated in a record-high 10 million votes for the far-right National Front in May. By weakening the labor law, Macron is playing with fire.

Compared with the pro-business employment model that prevails in the United States, the government’s reforms may seem modest. But they strike at the foundation of the French system, which seeks to provide workers with a more level playing field for their negotiations with employers. 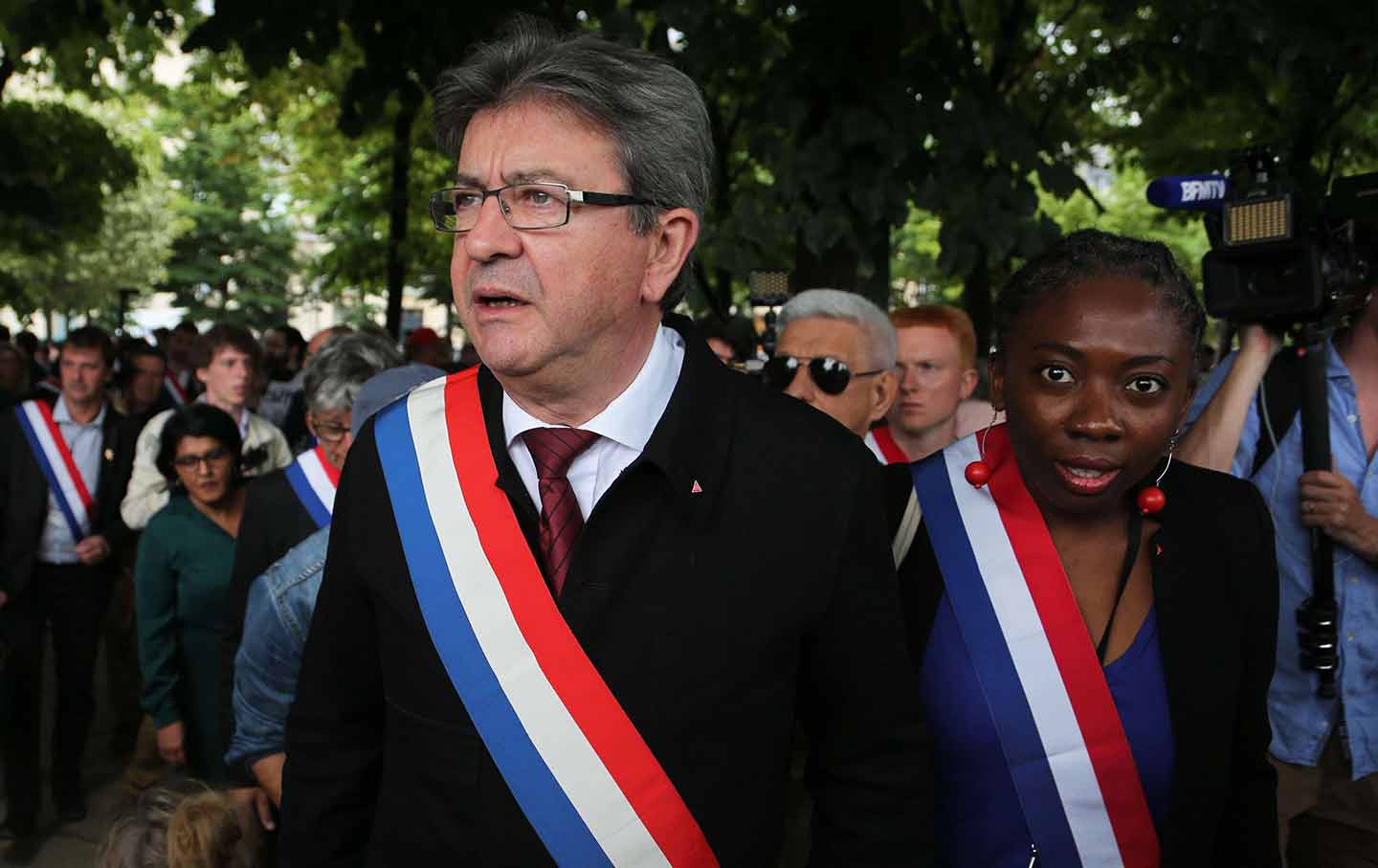 What’s Next for the French Left?

Among the major elements of the reform package is a proposal to limit worker compensation for unjustified layoffs. Unlike in the United States, where the so-called at-will employment doctrine reigns, French employers must generally show “cause” for job terminations. If they fail to do so, employees can seek damages in special courts that oversee employment-contract disputes. Under current law, these judges can force companies to dole out pay over extended periods of time. This prospect discourages unfair layoffs and provides employees a sense of job security.

Proposed reforms would radically overhaul this system. For the first time, the law would set upper limits on the amount of damages awarded. Under the government’s proposal, for example, someone unjustly fired after two years on the job would be compensated no more than three months’ pay. As such, trade unionists and labor-law experts fear the measure puts a price tag on layoffs. Whereas bosses may have previously hesitated over certain job cuts for fear of unfavorable court rulings, now they can rest assured that the firings will not cost more than several months of extra pay.

Other measures similarly pave the way for job cuts. As it stands, employers in France can justify economic layoffs by pointing to their financial difficulties, but multinational companies must show that such struggles extend across their global operations. The government’s reforms would limit that threshold to France alone. In other words, a major manufacturer doing business in a dozen different countries will be given legal footing to cry poverty in France just as it builds new plants in, say, Poland or Turkey.

The proposal also strikes a heavy blow against unions and workplace democracy at large. Since the advent of the postwar welfare state, French law has required large employers to maintain a series of different representative structures for employees, including worker-run health and safety committees. Macron’s reforms would merge these structures into a single unit. In practical terms, that means fewer people devoted to raising employee grievances—not to mention needless risk to occupational health and safety. (Existing on-the-ground checks partly explain why France has a workplace fatality rate 40 percent lower than the United States’.)

The reforms also curtail collective bargaining at small and medium-sized businesses, which together employ more than 6 million workers. Under Macron’s proposal, companies with fewer than 50 employees would be authorized to negotiate employment terms with employee representatives that are not sanctioned by unions. The reforms would also allow businesses with fewer than 11 employees to directly propose votes on modifying employment terms to their staff—a key departure from current law, which requires prior consultation with employee representatives. Within the tight confines of a small business, there will nearly always be pressure to succumb to the demands of managers.

Finally, the government seeks to deepen last year’s labor reforms by further undermining large-scale collective-bargaining agreements. While just about 11 percent of French workers belong to unions, the power of organized labor in France derives from its hefty institutional role. In addition to regularly consulting with the government, unions set national employment standards through sector-wide labor agreements. Last year’s labor law famously allowed company-level agreements that force employees to work longer hours than their counterparts in the same industry. But this year’s package also enables individual companies to negotiate over bonus pay. By the same token, the reforms would authorize bargaining over the use of short-term labor contracts. Employers will likely relish chance to convince unions to agree to the creation of new short-term jobs. But given companies’ incentives to control labor costs, such a practice risks becoming normalized over time, encouraging the growth of temporary gigs over standard employment contracts.

Following last year’s legislation, the changes would mark yet another step toward what is undoubtedly the promised land for bosses: The ability to fully set work rules and pay rates on their own, with neither pesky red tape nor irritable unionists blocking the way.

It is easy to see why the government’s proposal delights big business. (France’s equivalent of the Chamber of Commerce predictably applauded the reform package.) It is more difficult to understand how any of this will boost sustainable job growth. The results of a June poll overseen by France’s national statistical agency are especially revealing on this point. When asked to identify “barriers to hiring,” the top response of employers was “economic uncertainty.” Just 7 percent said labor costs were too high.

Of course, France’s existing labor laws are relatively generous to workers. They recognize the inherently unequal power balance of the workplace and give employees a modest set of tools to defend themselves against it. While that can make the labor code a subject of mockery, it also helps to support a quality of life that is enviable when compared to much of the rest of the industrialized world. The system is by no means perfect. For instance, labor regulations have not stopped the poverty rate from slowly creeping up in recent years—a trend that helps explain mounting populism on both sides of the political spectrum. Still, strong unions and protections against unjust layoffs have helped insulate many from the cruelties of global capitalism.

France stacks up well against its neighboring competitors, often touted as success stories for swallowing the tough-but-necessary medicine of labor reform. While Germany and the United Kingdom boast lower unemployment rates, they are also poorer societies. As their governments curbed union power and stimulated the creation of low-paying jobs, they encouraged an explosion in the share of working poor: 23 percent of German workers and 21 percent of British workers earn wages less than two-thirds the national median pay rate; just 9 percent do in France. It may be easier to run a business in the former countries, but workers often have it better in the latter.

Politically, too, Macron’s labor reforms beckon toward a dark and familiar place. If Brexit and Trump were not sufficient warnings, recent French elections should have been. In the second round of the presidential vote, 34 percent of voters opted for far-right populist Marine Le Pen—including about half of working-class voters, according to exit polls. In the following month’s legislative elections, many low-income voters didn’t even bother showing up, fueling a record-low turnout rate. Working-class people are alternatively withdrawing from politics and lashing out through the ballot box. The development is alarming, and unhealthy for democracy.

Not unlike Trump voters and Brexiters, National Front supporters tend to be driven by a blend of racism, material suffering, and abstract frustration at the political system. Party bigwigs are thus no doubt licking their lips at the reforms: On top of the hardship it promises, the circumstances under which the proposal may become law bolsters the National Front’s narrative of a rigged system. Instead of following normal parliamentary procedure—which allows for debate and opens bills up to amendment—Macron is pursuing the changes by executive order. (Parliament voted in early August to grant authority to the Macron administration to write orders on a defined scope of labor law.) Macron signed off on them on Friday. After that, parliamentarians are limited to an up-or-down vote on the sweeping legislation. With polls showing nearly six in 10 opposed to the reforms, the democratic deficit is all the more flagrant.

Fortunately, forces besides the National Front offer an alternative vision to that of the government. In the past two weeks, hundreds of thousands of them—students, unionists, retirees, and left-wing activists—have taken to the streets in union-backed protests across the country. On Saturday, Jean-Luc Mélenchon’s party, France Insoumise, will hold another set of protests against the reforms. These critics have long called for employment reforms of their own, such as shortening the work week and hiking the minimum wage, in addition to broader demands, such as boosting public investment.

Some have focused more precisely on improving the labor code. At more than 3,000 pages, existing regulations are unquestionably long-winded and complicated at points—in no small part because of exemptions and loopholes carved out for employers. In response to ongoing debates over the code’s alleged outdatedness, a group of labor-law experts have called for updating and simplifying the rules, all the while strengthening them for employees.

Led by Paris West-Nanterre law professor Emmanuel Dockès, the group published a proposal last year that would cut the current code’s length by two-thirds. Among other innovations, it would encourage employers to reduce working hours—and thus tackle unemployment—by creating the legal concept of “the right to free time,” expand the definition of employment to cover new gig-economy workers like Uber drivers, and empower employee representatives to better enforce working hours.

Proposals of this nature are infinitely more valuable than kowtowing to longstanding business demands to eliminate protections for workers. It’s no secret in which direction employers would like to see France’s labor code evolve. But if the goal of policymakers is genuinely to improve the livelihood of wage-earners—not simply to weaken unions or lower the cost of doing business—then they ought to tune out the predictable hand-wringing from bosses and listen to voices in the street.