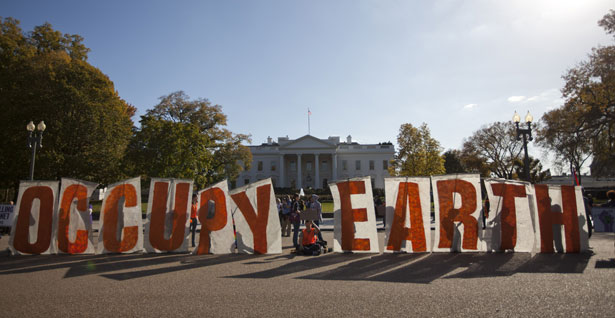 Demonstrators gather during a protest against the Keystone XL Pipeline outside the White House on Sunday, November 6, 2011, in Washington. (AP Photo/Evan Vucci)

On March 2 I will risk arrest in front of the White House alongside hundreds of other young people from across the country. Our plan is to enact a theatrical human oil spill in an act of nonviolent civil disobedience to protest the Keystone XL pipeline.

Youth and students around the country are mobilizing, preparing to return to the White House to demand action in what could be the most crucial environmental decision of Obama’s presidency: the approval or rejection of Keystone XL.

As young people, we’ll be living with the results of this decision for the rest of our lives. Science and basic math have shown time and again that Keystone XL and the exploitation of the Alberta tar sands will have serious climate ramifications for our country and the entire planet. The State Department’s environmental impact study on the pipeline shows that all emission scenarios in which the Keystone XL is approved put us on a path to warming of more than six degrees C (11 F). This would put thousands of US cities and counties—and the homes of millions of Americans—underwater. The negative health and economic consequences of the pipeline are also well documented.

We have and will continue to employ every peaceful and legal channel available to us to stop this pipeline. We’ve issued public comments. We’ve petitioned. We’ve rallied. We’ve lobbied our politicians (though we were outspent thirty-five to one). We’ve cast votes for climate champions who opposed the pipeline. But it has not been enough to make our leaders to commit to real climate action. With lives already impacted and our future on the line, we feel we have no choice but to escalate.

The fight over this pipeline has been going on for years. It began with courageous resistance to tar sands exploitation by indigenous groups like the Beaver Lake Cree and Athabasca Chipewyan First Nations—living at ground zero of tar sands development—and communities on the frontlines of this fight in places like Manchester and Houston and along the Kalamazoo River in Michigan, the site of a 2010 tar sands spill that still hasn’t been cleaned.

These predominantly low-income communities of color have had their water contaminated beyond potability and their air polluted with nitrogen dioxide and sulphur dioxide. These commuities have disproportionately high rates of asthma, and their residents suffer rare forms of cancer associated with tar sands pollution. They are fighting back to defend their health, their land, their water and their homes. It’s important that those of us with privilege—including basic privileges like safe water, breathable air and livable communities—join in this fight.

We are all indebted to these communities for their leadership in fighting Keystone XL and fossil fuel expansion. We young people are determined to play our role, too. We are here in solidarity with our allies, whose lives and livelihoods are on the line, and who have taken far greater risks than this to defend their communities. We will do everything we can to protect the land and people we love.

Ultimately, the Keystone XL decision lies in the hands of the Obama administration, which at last has an opportunity to match rhetoric with action. As youth, we turned out for President Obama in both elections. Our vote decided the outcome in pivotal swing states that include Florida, Pennsylvania and Ohio. We chose to elect a president who would protect us from a future of climate chaos.

I believed the president when he said, “We want our children to live in an America…that isn’t threatened by the destructive power of a warming planet.” I trusted him to appoint climate-conscious officials like Secretary Kerry, who in a speech last week called climate change the “world’s most fearsome” weapon of mass destruction, and affirmed, “We can make good on the moral responsibility we all have to leave future generations with a planet that is clean and healthy and sustainable for the future.”

With Keystone XL, President Obama and Secretary Kerry have the freedom to bypass our dysfunctional Congress and prove that they’re serious about protecting our future. In coming months, Obama and his administration will decide whether or not to approve construction of the Northern leg of the pipeline. Will they match words with action, or will they betray frontline communities, young people and all future generations of Americans?

We felt betrayed when the president fast-tracked the Southern leg of the pipeline through Oklahoma and Texas, but there is still hope he will put things right. This is the president’s chance to answer his own call to action. But we can no longer sit idly by and wait for him (or anyone else) to make the right choices. We will be there, at his house, to make sure he does, or to hold him accountable if he sides with foreign special interests and the oil lobby. We will be there to fight for our future and the lives of people already living under the worst impacts of fossil fuel extraction and climate change. Will you join us?