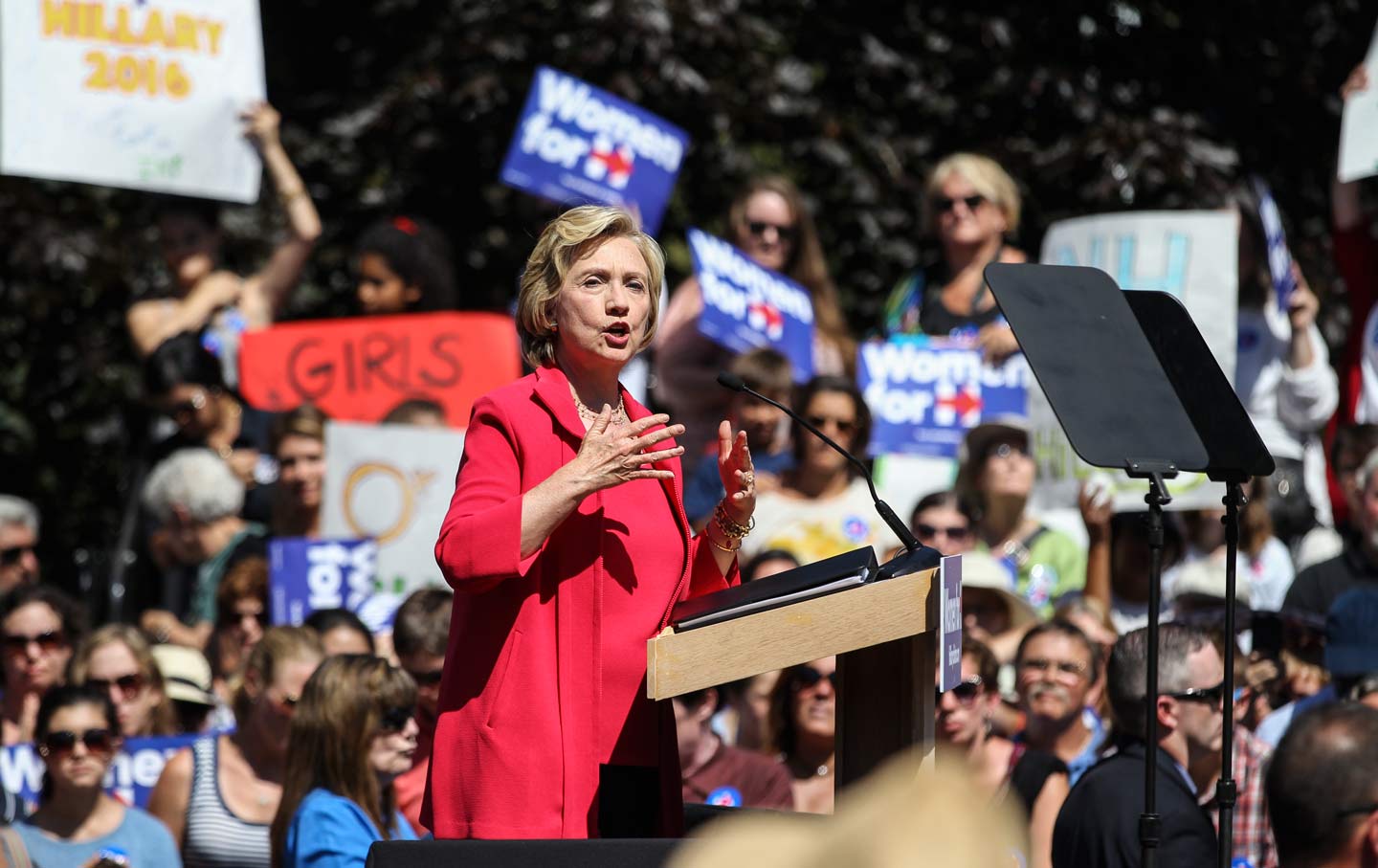 I like Bernie Sanders. In my calmer moments, I know it’s not fair to blame him for his annoying fanboys—the Bernie bros—who write off Hillary Clinton’s supporters as rich white women or party hacks and dismiss wanting to see a liberal, pro-choice Democratic woman in the White House as “identity politics.” I think it’s great that Bernie is giving Hillary a run for her money. He’s pushing her to the left, showing pundits and politicos that there’s more of a constituency for progressive politics than they think, and he may even help spark a grassroots movement that outlasts his campaign. Hillary supporters should be grateful to him as well: The better he debates, the cleverer she has to be; the more popular he becomes, the less her nomination will look like a “coronation.” It’s good for Hillary to have to work to win the primary. I hear Ted Cruz is very smart.

For more from The Nation on Hillary Clinton, check out Who Is Hillary Clinton? Two Decades of Answers From the Left, an ebook and paperback original by eBookNation in partnership with IB Tauris, available January 30.

But Bernie Sanders isn’t going to win the nomination… can we at least be honest about that? And if he did, he wouldn’t win the general election. And if, by some miracle, he did, he’d still get creamed by the same political and economic forces that hemmed in President Obama. Nation contributing editor (and my friend) Doug Henwood says much the same thing in his anti-Hillary polemic, My Turn: Hillary Clinton Targets the Presidency. That’s one of the things I’ve always admired about Doug: He’s a realist.

My Turn, an expanded and heavily annotated version of his Harper’s cover story of November 2014, is a brisk tour of everything putatively dishonest, corrupt, venal, nasty, and equivocating about Hillary, from high school to the present moment. Well, not quite everything: As I write, she’s being attacked by a whole passel of Republicans hardly known for their sensitivity to sexual-assault victims for not supporting Paula Jones, Kathleen Willey, and Juanita Broaddrick when they accused Bill Clinton of sex crimes. Washington Post columnist Ruth Marcus agrees: If Hillary wants to share the credit for the Clinton administration’s successes, it’s fair to blame her for not knowing or believing the worst about her husband’s sex life.

In his assessment of the most viable female presidential candidate in history, Henwood isn’t interested in those aspects of Hillary’s biography that animate attacks like these and fascinate so many women commentators: Hillary’s marriage and its compromises, the double binds placed on ambitious women, the extraordinary virulence of the misogyny directed at her. He ignores as well the curious fact that the person he regards as an enthusiastic tool of corporate capitalism and seller-out of other women (cf. welfare reform) is regarded as a radical socialist feminist by much of the country. But when he does weigh in on Hillary the person, he’s snarky: She swears (imagine even noticing that about a man), prettifies her difficult childhood, is disliked by some. To his credit, Henwood steers clear of the ravings of professional Hillary haters. His run-through of her imbroglios, from Whitewater to that private e-mail server, is terse and straightforward—the only time he seems really angry is when he charges the Clinton Foundation with bungling its rebuilding efforts in post-earthquake Haiti. (At the time, only Bill was at the helm of the foundation, but Henwood argues that Hillary, as secretary of state, urged investment in reconstruction projects that fell far short of what was needed.)

What’s wrong with a woman forthrightly aiming for the presidency?

Still, negative rumors and remarks by unfriendly witnesses are given credence by Henwood, while positive ones are dismissed as the dutiful murmurs of flunkies. The closest the book gets to facing the extraordinary intensity of emotion that Hillary provokes is the cover. It’s a campy, hyperrealistic painting by Sarah Sole of Hillary in red, pointing a gun at… the presidency? The reader? Anyone who gets in her way? The ambivalent nature of this noirish image—is she a powerful, sexy woman warrior or a scary evil bitch?—got it a lot of attention online. Henwood’s publisher, OR Books, is marketing a tote bag with just the picture, though, and I want one.

“The case for Hillary,” Henwood writes, “boils down to this: she has experience, she’s a woman, and it’s her turn.” For Henwood, though, Hillary is semicompetent at best, her being a woman is irrelevant, and there’s something wrong about forthrightly aiming at the White House. Let’s unpack that a bit.

Experience? The book has an epigraph from former undersecretary of the Treasury Brad DeLong, who worked on Hillary’s healthcare-reform initiative in the 1990s and wrote a long complaint on his blog in 2003 about her flubbing of that effort (“Hillary Rodham Clinton needs to be kept very far away from the White House for the rest of her life”). Henwood writes that DeLong didn’t respond to his attempts to find out if he still felt this way, but a minute’s Googling would have revealed that DeLong retracted that view on his blog in 2008 and again in 2015. Today, he writes that Hillary “has been a successful Secretary of State, ran an almost-good-enough presidential nomination campaign, and been an effective Senator.” As a result, he enthusiastically endorses her.

Her gender? What’s wrong with wanting to see a woman—not a Sarah Palin, but a highly qualified liberal-feminist Democratic woman—in the most powerful job in the world, after more than 200 years of male occupancy? Henwood avoids dealing with the gendered nature of the attacks on Hillary, but he doesn’t entirely escape the pit himself. After all, the sins he finds so damning in Hillary are those of a multitude of successful male Democratic politicians, who similarly cozy up to the rich, accept huge speaking fees, have books ghost-written for them, and worse. John Kerry, for example, voted for welfare “reform” and the Iraq War, but Henwood endorsed him in 2004.

As for it being “her turn,” what does that even mean, except to imply unearned entitlement—while also, contradictorily, finding something suspicious in how hard Clinton has worked to attain the prize? An ambitious woman just can’t win. But what if Clinton actually is the only realistic alternative to whichever anti-choice, climate-denying, racist Jesus-panderer wins the other party’s nomination? What if, this time, it really is her turn?