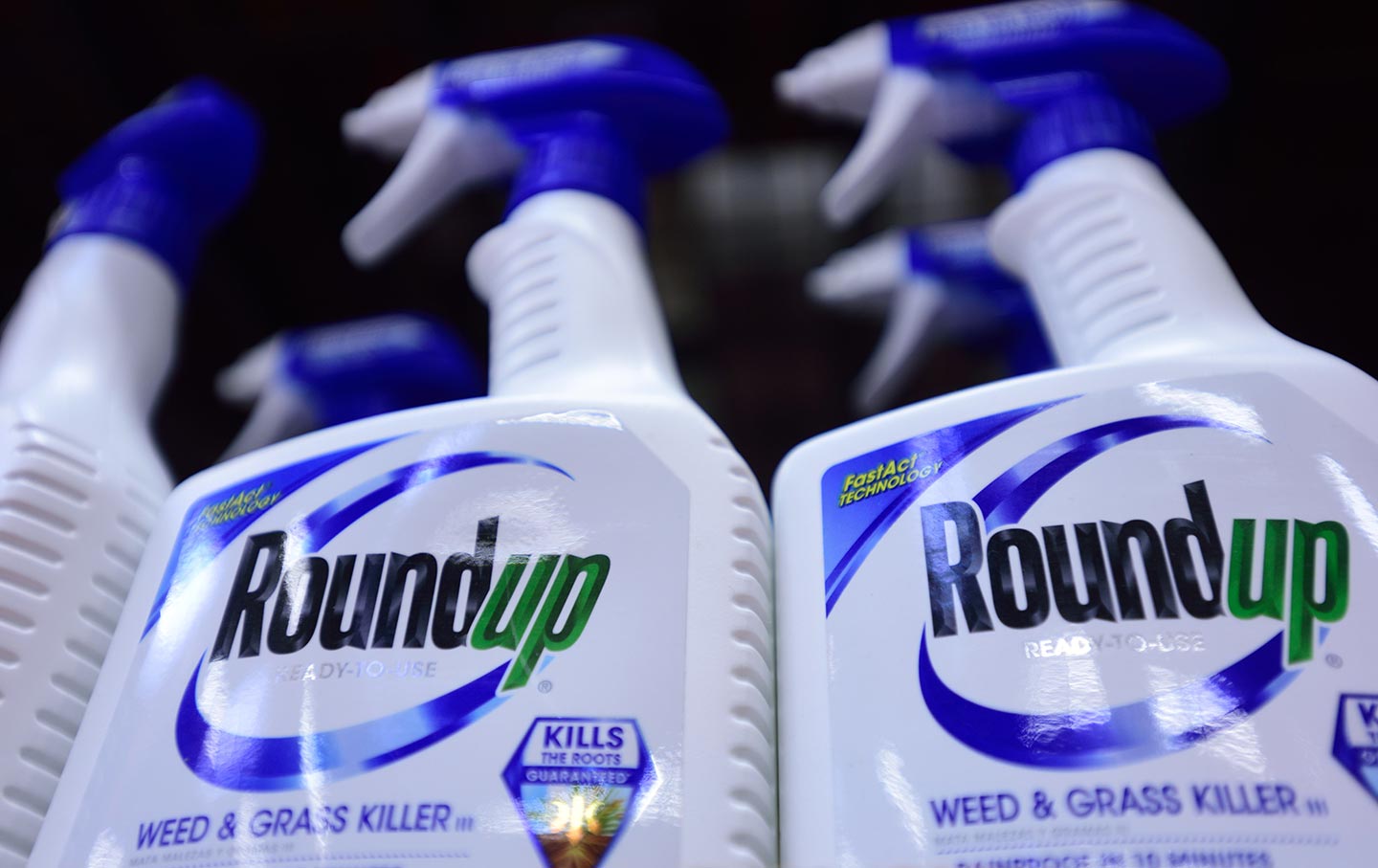 The perennial David-and-Goliath bogeyman of Eurosceptics is the faceless Brussels bureaucrat, who relishes heaping business-killing regulations on mom-and-pop farmers and shop owners. But in the shadow of Brexit’s populist revolt, one fraught regulatory debate over the pesticide Roundup shows that cries of “overregulation” mask systemic threats to public health, food sovereignty, and labor rights. And despite political grandstanding against Brussels, the Eurocracy is often the people’s last line of defense against some subsurface environmental hazards.

The international debate over regulating glyphosate, Roundup’s core ingredient, is rooted in environmental and health risks surrounding both the herbicide itself and the genetically modified crops that depend on such agrochemicals. Last year, a large research review by the World Health Organization’s International Agency for Research Against Cancer (IARC) offered what appeared to be a definitive opinion, concluding glyphosate was “probably carcinogenic.” But in June, the European Commission punted again, deciding to extend glyphosate’s license another 18 months. This was followed by tighter usage restrictions that still fell far short of the full ban advocates were seeking—and that will still leave workers in limbo.

There are many consumer-based arguments against Roundup—not just passionate fears about “frankenfoods” but also concrete sustainability challenges from pesticide resistance and monocultures. However, the most immediate threat is likely not to people eating pesticide-grown foods but to the workers who harvest and process them. Agricultural workers’ exposure to pesticides like Roundup is far more intense than anything ordinary consumers experience.

The IARC’s review cited occupational-health studies in the United States, Canada, and Sweden linking glyphosate exposure at work to blood cancers and “DNA and chromosomal damage in mammals, and in human and animal cells in vitro.” Studies on forestry and landscaping workers revealed contamination “in air during spraying, in water, and in food” and “in the blood and urine of agricultural workers, indicating absorption.”

Then a separate regulatory body, the European Food Safety Authority (EFSA), somehow drew the exact opposite conclusion, reiterating the industry’s argument and ruling that cancer risk was actually unlikely.

But that Monsanto-friendly analysis, according to Corporate Europe Observatory, is suspiciously opaque, relying on several undisclosed mystery studies. Public access to this research is evidently barred due to the industry’s sensitivity on “trade secrets.” Critics read this analysis as pseudoscience at worst, or at best, another sign of systematic obfuscation to uphold the power asymmetry between labor and corporate actors in EU regulatory debates.

There’s room for interpretation, of course: as Wired reports, historically, IARC has provided expert guidance based on straightforward science, not direct policymaking advice, based on the assumption that “local authorities are in a better position to make local recommendations.” But the conflicting opinions on glyphosate now leaves workers’ immediate safety needs subject to political whims and corporate lobbyists. EU authorization for an industrial chemical could last up to 15 years.

While Roundup’s long-term health effects remain in dispute, activists cite a higher public interest mandate for EU ministers responsible for industry oversight: the precautionary principle, a regulatory framework that aims to protect communities and natural resources above all and avoid unnecessary risks purely in the name of “free trade.”

IUF, a global agricultural and food worker union federation, blasted EU regulators for the impasse, warning that workers are already suffering amid the rise of a “hyper-industrialized food system,” through both short-term illnesses from toxic exposures and long-term threats like antibiotic resistance and exposure to endocrine disruptors.

Meanwhile, passivity in Brussels ensures that Roundup’s business elsewhere will keep growing unabated. Glyphosate use on US soy crops has driven an over-40 percent rise in total domestic herbicide use since 1996. Europe leads the world with over $11 billion in annual pesticide sales.

While some argue glyphosate can be a healthier replacement for older, more toxic pesticides, more progressive advocates demand a universal cessation of pesticide use. IUF also contends that the cost of Roundup’s monopoly crowds out more pro-worker alternatives, such as “multicropping, mixed farming and rotational systems which use catch and cover crops for non-chemical pest control.”

These alternatives represent a true application of the precautionary principle, tackling environmental pollution at its root in the fields, long before products reach our tables. The potential for EU-wide policies to establish stronger, continent-wide standards for sustainability is one reason workers have a stake in centralized regulation—as long as regulators aren’t manipulated by corporate influence.

Pesticide impacts also fall unequally across the world. Women are often the forgotten victims as their exposure frequently comes through domestic work, like washing clothes. Children suffer quietly as well. Research on greenhouse farmworkers has shown “increased risk of reduced birth weight and overdevelopment of fatty tissues” among their children and “Neuropsychological problems involving language and motor activity…among the girls.”

On issues of worker health and sustainable development, it is Global South workers who live and breathe the consequences of the glyphosate empire, serving as bellwethers of the global blowback of industrial farming. And the more powerful the agrochemical lobby is, the harder it is for labor and poorer countries to resist. As IUF argues:

Continued authorization would not only place lives at risk in Europe; it would boost efforts to undo Sri Lanka’s recent ban on glyphosate and derail momentum towards banning or seriously restricting glyphosate in Argentina, Brazil, El Salvador and elsewhere.

The glyphosate debate reveals that pesticide regulation in the EU is focused on consumer protection…. The issue of workers’ exposure (and of environmental “co-exposure” of people living near the fields) is always considered as a secondary issue.

Soon the post-Brexit turmoil will be eclipsed by the pending Transatlantic Trade and Investment Partnership, which could further deregulate agricultural industries in both North America and Europe, potentially undermining consumer and labor safeguards.

If we are concerned about the ecological consequences of the weed killers we eat in our food, we should look first at the workers who are already carrying it in their bodies.