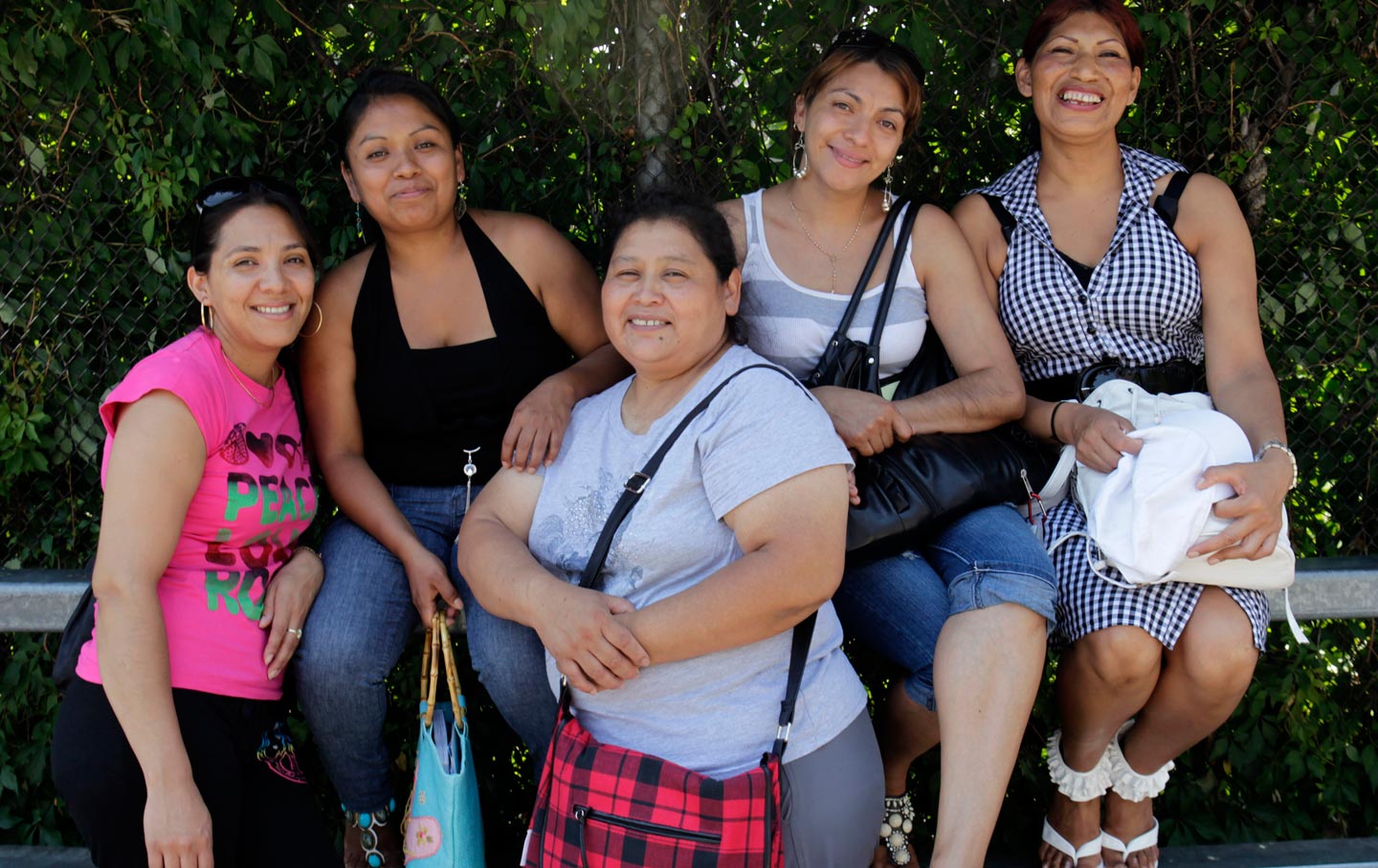 During the mid-20th century, black women lined up on sad corners of New York known as the Bronx Slave Market, waiting for white “madams” to pluck impoverished housemaids from the so-called “paper-bag brigade.” These desperate domestics would work virtually any job for a day, for any wage.

Today the image of the immigrant day laborer is often associated with Latino construction workers. But on some streets, women still gather, and like their forebears, they face an underground labor market fraught with hidden risks.

A new study by Brooklyn-based Worker’s Justice Project (WJP) and Cornell’s Worker Institue, reveals surprising details about the many overlooked women in day labor. Working marginal, casual jobs with little regulatory protection, they hustle from gig to gig, typically for as little pay or as many hours the boss wants.

Researchers surveyed a sample of about 80 women day laborers who congregate at a well-trafficked informal hiring site in Brooklyn. They generally work up to 20 about hours a week, earning on average less than $900 per month. Their wages fall well short of what the women require to cover basic needs, though most are primary income earners for their families.

Nearly all the women surveyed, mostly Latinas over age 30, had worked informally as housekeepers, but some 80 percent reported also having worked in construction, warehouse, and food-processing sectors. Others performed low-wage service labor, like commercial cleaning or restaurant gigs. One common feature of all their jobs is long hours spent waiting to pick up gigs, day to day, as a long-term livelihood. About one in five women surveyed had been “frequenting the site for 6 or more years”; over two-thirds spent two to five days a week there. A typical workday involves perhaps four hours of labor without a break.

It’s easy to end up stiffed when your job lasts just one day. About 40 percent of respondents said they had been underpaid. This is roughly in line with a 2011 survey of mostly male day laborers in New Jersey that showed over half had been underpaid in the last year.

The roughly one-third of women who have worked as cleaners on construction jobs, generally a male-dominated industry, seem to suffer double discrimination. According to Worker Institute researcher Maria Figueroa, though this group is under-researched, “anecdotal information indicates that construction contractors hire the women day laborers to do certain jobs because they consider them a source of cheap labor (cheaper than men).”

Sometimes the abuse is more acute. A third of respondents reported experiencing “verbal abuse or humiliation;” some faced threats of exposing their immigration status, or even false accusations of stealing.

Sexual harassment is a silent scourge. One respondent noted, “This type of harassment occurs more often than it is reported…women just feel ashamed and don’t want to talk about it.”

And often there’s simply no one to talk with. The fundamental peril endemic to day labor is that it involves working alone, whether as anonymous factory temps or in a private kitchen.

Yet some women actually see this as their best shot at earning a living, because they’re at least somewhat independent.

“I like it because we don’t have to pay an agency,” one interviewee remarked, referring to employment agencies that often arrange jobs for immigrant workers and, according to researchers, “charge high fees that can amount to even more than half of a week’s earnings for the first four weeks of employment.” On Wall Street or Silicon Valley, such enterprising drive might be praised as a classic American “can do” attitude, but the only reward for these immigrants’ resilience is daily degradation.

Like the jobs they do, the hiring site itself can be a perilous space: Women are constantly exposed to harsh weather and pollution.“Seventy-one percent of survey respondents reported that they believed they have gotten sick because of conditions at the site”—for example, lack of accessible bathroom facilities may lead to urinary tract infections. The work exposed them to hazards like “toxic chemicals contained in cleaning products, risk of injury or falls, and exposure to human pathogens” when scrubbing bathrooms without protective gear, along with bodily strain from cleaning jobs.

Most reported no regular source of health care, sometimes relying instead on home remedies and hospital emergency rooms. Although Brooklyn is one of the country’s major providers of healthcare to undocumented immigrants through public programs, health-care access remains strictly limited for the undocumented, as they are barred from direct federal Medicaid benefits.

New York is also unique in providing special protections to domestic workers through a “bill of rights” framework that mandates wage and schedule standards. But it generally doesn’t apply to casually employed day laborers.

“Currently the [Bill of Rights] explicitly excludes domestic workers who are employed on a casual basis,” notes Figueroa, but one potential solution is to develop “a day-labor approach” to the legal framework, expanding the protections to cover short-term jobs, “since 99 percent of the women on the day-labor site are hired to do domestic work.”

Protecting day laborers requires a combination of public policy and grassroots action. WJP’s Day Laborer Workforce Initiative has piloted a worker-center organizing model based on mutual aid. The program has established the worker-led Bay Parkway Community Job Center, as an institutionalized hiring-hall system that focuses on securing “bargaining power, employability and long-term employment,” offering a base wage of about $17.50 an hour, English classes, and labor-rights trainings.

With the same ethos of community-centered worker empowerment, WJP helped women day laborers incubate the Apple Eco-Cleaning cooperative in 2011, a small-scale social enterprise that brands itself as an eco-conscious, labor-friendly cleaning service. The company models a form of labor-led autonomy and innovation that can stabilize workers and build careers that they could only dream of while waiting on a barren corner for a day’s work.

Turning a Brooklyn corner into a real resource for laborers begins with building on the resilience and creativity the workers have forged through hardship. And this could be a lesson for all workers today, who navigate neoliberal markets of increasingly precarious, unstable work. The tragic history of the street labor market can be transformed into a springboard toward dignified independence: achieving self-sufficiency not through struggle in isolation but through autonomy in collective action.