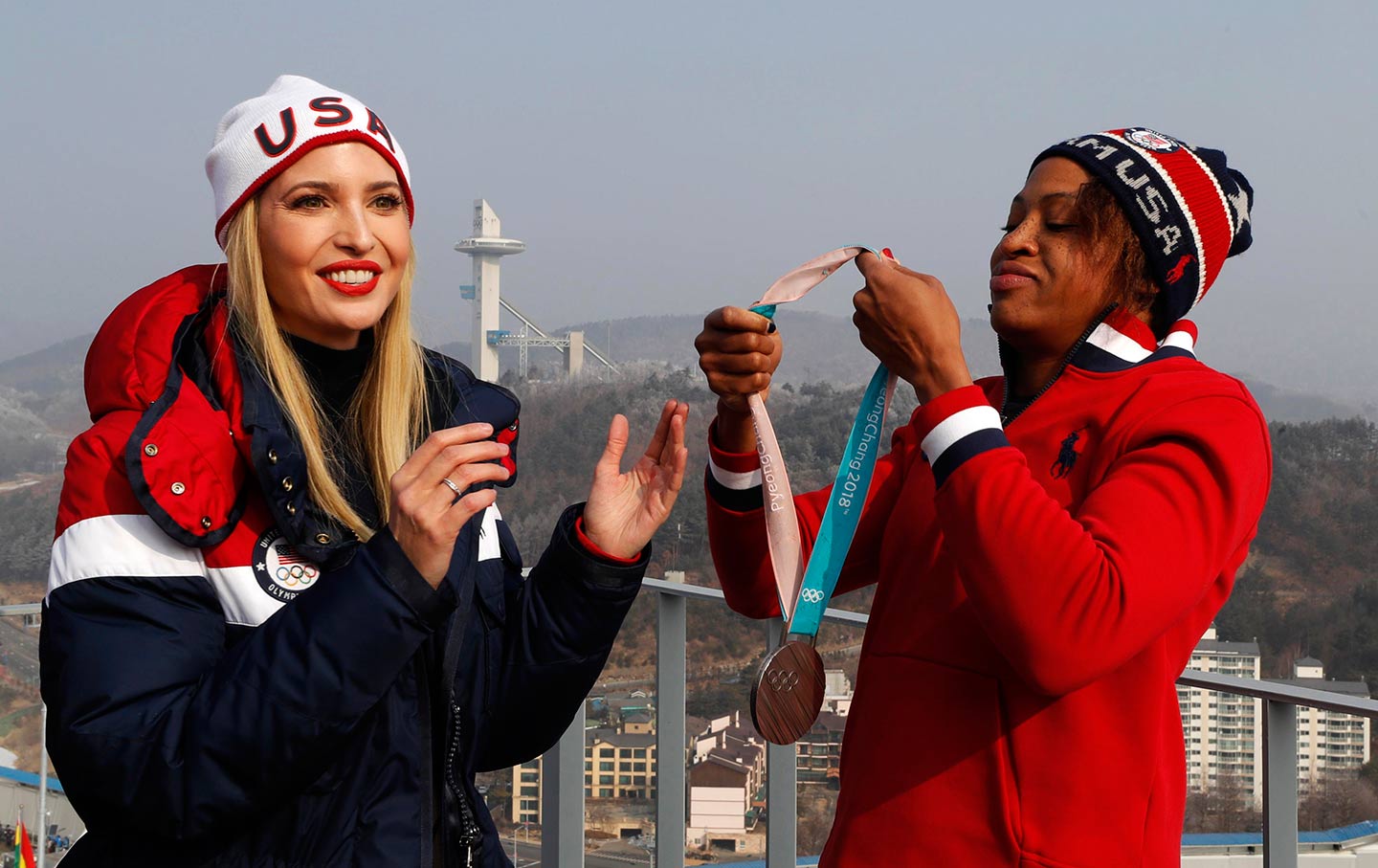 The 2018 Winter Olympic Games in Pyeongchang, South Korea saw a significant drop in television ratings and national attention. That’s the primary difference between this year’s spectacle and those of years past. The similarities are far uglier. Beneath the mountains of powdery snow and fluffy television coverage, we still have the realities of militarization and debt that will plague South Korea long after the media have packed up their cameras.

For starters, as with previous Olympics, the Pyeongchang Games were run on the backs of a labor force of exploited workers. One German media outlet reported that of the 15,000 “volunteers,” more than 2,000 had quit because of squalid living conditions, tiny portions of sub-par food, and an absence of work breaks. It wasn’t unheard of for 10 volunteers to be crammed into a room built for four. Dozens of petitions were filed with South Korean President Moon Jae-in, complaining that working and living conditions “are unbelievably inadequate.” One volunteer said, “When I think about how much money is being spent here, I wonder why we do not get paid at all.”

Speaking of money, there’s the International Olympic Committee, whose members parachuted into Pyeongchang, enjoyed five-star treatment, and then jetted home. The IOC reportedly has around $1 billion in its coffers. Not paying people for their labor saves each Olympics millions. In Rio, where 70,000 “volunteers” were sought out, conservative estimates put savings at more than $100 million. It’s ugly as sin; the only thing changing is the languages that foremen use to berate these uncompensated laborers.

Beyond this, the grand promises of economic nirvana at the Games escalate the hopes of local entrepreneurs, only to have them dashed come Games-time. For ski-rental businesses in Pyeongchang, the Olympics have been a nightmare. They have been forced to shutter their stores since mid-January, when Olympic organizers took over the area. As a result, business is down more than 80 percent this year. The local ski-shop association hasn’t sat idly by. It posted a protest banner reading “2018 Pyeongchang Olympic kill us!” Some local businesses have petitioned the government for compensation to offset losses. Others have constructed makeshift restaurants to try to scrape some income from the Games. One US tourist dubbed the situation “a huge bummer.” He said, ”I was planning to come and ski while watching the Olympics, but then seeing nothing was open was really just sad.” It’s even sadder for the small-business owners who are told the Olympics will mean a financial bonanza, only to instead experience a bust.

Then there is the price of the Games. An estimated $6 billion price tag has ballooned to more than $13 billion. These increased costs are seen in two factors: the militarism in the streets and the money that will be spent to maintain venues once the five-ring circus pulls up stakes. As with previous Olympics, local security forces leveraged the Games to ratchet up surveillance technologies like biometric facial-recognition systems, cameras pegged to nearly every public post, and a replenished stash of tactical drones. Add to this 60,000 police patrolling the Games each day, including 50,000 South Korean soldiers, and you have a recipe for militarization that blends into “normal” policing practices after the Games.

Lastly, the beautiful venues create their own problems. In August 2017, only six months before the Olympics kicked off, the IOC came to the halfhearted conclusion that there was a problem with the plans for the new venues, post-Games. Today, only eight of the 12 have projected uses. One $109 million stadium will be used four times during the Olympics and Paralympics and then torn down—a sort of disposable arena, like a multimillion-dollar coffee cup. The future of three additional venues is as yet undecided. No matter what, the people of the region will have to pay to maintain them, spreading the cost to future generations.

If the Olympics didn’t feature remarkable athletes from around the globe—the best that sports can provide—the Games would have withered in a corner of the sports world long ago. These Games have brought extraordinary performances in the rink and on the mountain, and they also reminded us that the politics of representation absolutely matters. When Gus Kenworthy, the out-gay US alpine skier, kissed his boyfriend, Matthew Wilkas, live on NBC, millions of viewers saw something beautiful, natural, and sure to give all the right people fits. This smooch seen round the world was extra-meaningful in the wake of noted anti-LBGT vice bigot in chief Mike Pence’s clumsy muddle through the opening ceremony—where he refused to stand to honor the unified Korean Olympic team—and the vice president’s pre-Games squabble with out-gay figure skater Adam Rippon over gay conversion therapy. When Kenworthy sustained a hand injury in competition, he took it straight to the vice president, tweeting, “Broke my thumb yesterday in practice. It won’t stop me from competing (obvi) but it does prevent me from shaking Pence’s hand so… Silver linings!” Canadian figure-skater Eric Radford also represented on the podium in Pyeongchang, becoming the first openly gay man to win a gold medal in the Winter Olympics. These politically representative moments matter and will go down in the history books.

Then there’s Elana Meyers Taylor, the African-American bobsledder who took silver in Pyeongchang, the third consecutive Winter Olympics where she medaled. As a one-person whirlwind of recruiting—she estimates she reaches out to more than 100 athletes a year—she has almost single-handedly helped diversify the US Olympic squad by converting top-flight athletes from other sports into world-class bobsledders. Meanwhile, First Nations hockey player Brigette Lacquette became the first Aboriginal woman to represent Canada in hockey at the Games. Her father hails from the O-Chi-Chak-Ko-Sipi First Nation of Manitoba, and her mother is from Cote First Nation in Saskatchewan.

Then there is Maame Biney, who came to the United States from Ghana at the age of 5, trained in Washington, DC, in a program for inner-city kids and is a powerful rebuke to anti-immigration chauvinists emboldened by the Trump presidency. And if there is a face of these Games, it’s the amazing 17-year-old snowboarder Chloe Kim, the Korean American from California who won gold in Pyeongchang, along the way gleefully eating churros and answering journalists’ questions in English and Korean. But, despite these exciting advances, this diversity should not obscure the fact that we are still talking about a US Olympic squad that is 92 percent white.

We shouldn’t underestimate the importance of these athletes, their responsibility as role models, and their in-your-face refutations of homophobia racism and anti-immigrant hysteria. At the same time, we shouldn’t allow all of this good to obscure so much bad and an avalanche of ugly.

It is fitting that the representative of the US government at the closing ceremonies was the unelected Ivanka Trump, someone whose family is awash in debt and criminality and whose clothing line has been cited for sweatshops and numerous labor abuses. She surely felt right at home.