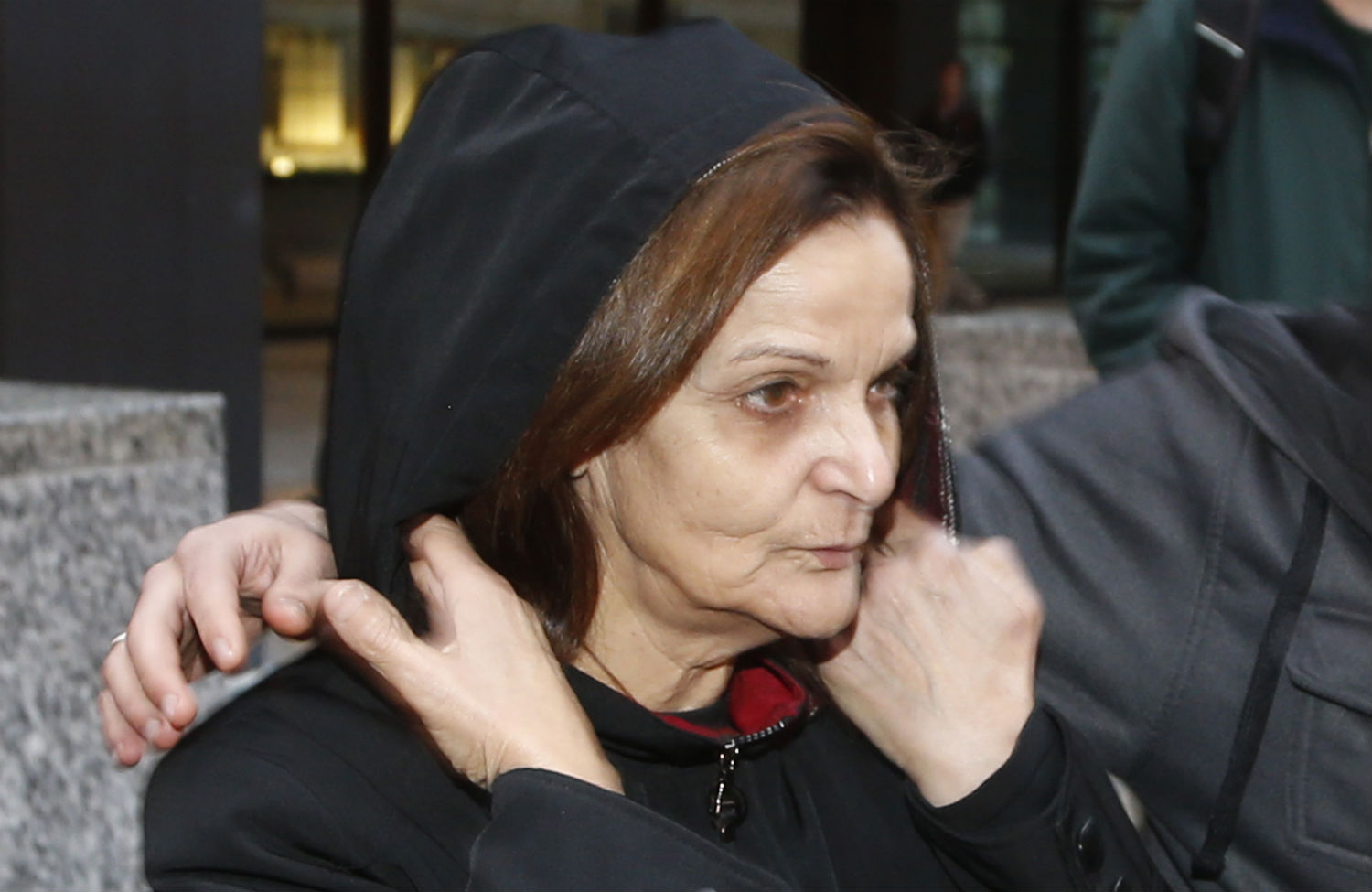 Rasmea Odeh was one month old when her family fled from their home in Lifta, a village outside Jerusalem. By February 1948, the Zionist army had destroyed Lifta and expelled its residents as part of its strategy to take control of Jerusalem. Odeh grew up as a refugee in Ramallah in the West Bank, which she saw come under occupation by the Israeli army in 1967.

When she was 21, in 1969, Odeh was arrested in the middle of the night by Israeli soldiers at her home, and for twenty-five days her interrogators tortured her. She was beaten from head to toe with sticks and metal bars; her body, including genitalia and breasts, was subjected to electric shocks after she was forced to watch a male prisoner tortured to death in this very way. All the while, she was told she would die if she did not confess. But it was not until they brought in her father, threatening to force him to rape her, that she agreed to sign a confession stating that she had helped orchestrate two explosions in West Jerusalem that killed two civilians. Even then, her torturers raped her with a thick wooden stick.

Standing before a military court less than one month later, Odeh renounced the confession. But the panel of judges ignored that, and Odeh was sentenced to ten years plus life in prison. Ten years later, she was released in a prisoner exchange, along with seventy-five other Palestinians. That same year, in 1979, Odeh traveled to Geneva, where she described to the United Nations precisely how she came to be convicted of terrorism by Israel. In the years following, Odeh lived in Lebanon and Jordan, where she obtained a law degree. In 1995 she immigrated to the United States, joining her brother and father, both US citizens, and the large Arab-American communities in Detroit and, later, Chicago.

Here Rasmea Odeh would continue the work she began as a young woman: working with other Arab women to organize around principles of social and economic justice. She became the associate director of the Arab American Action Network (AAAN) in 2007, having established in the previous year the Arab Women’s Committee, through which she helped Arabic-speaking immigrants learn English and acclimate to their lives in the American Midwest. In May 2013, at age 66, Odeh was given the Mosaic Award for Outstanding Community Leadership from the Chicago Cultural Alliance, an association of cultural centers and ethnic museums in the Chicago area.

From time to time after coming to the United States, Odeh would speak publicly about her treatment in Israeli custody before and after her conviction. But when she filled out her N-400 Application for Naturalization in 2004—after living and working for a decade in the United States—she did not divulge these things in her answers to the four questions that probe applicants’ past brushes with the “law.” Nor, as US prosecutors now allege, did she correct the oversight when she conducted her final interview with immigration officials before they granted her US citizenship later that year.

Last October, agents from the Department of Homeland Security came to Odeh’s house in the Chicago suburbs and arrested her on the charge of unlawful procurement of naturalization, a low-level felony that carries a sentence ranging from probation to ten years. Odeh was released on $15,000 bond and for the last year has been preparing to go to trial.

Today, November 4, the government’s trial against Odeh, now 67, begins. Though a resident of Chicago, she will be tried in the Federal District Court of Eastern Michigan.

How did her erroneous answers on naturalization papers that are nine years old—one year shy of the statute of limitations—come to the Justice Department’s attention? In fact, Odeh’s indictment is the sole fruit the government managed to harvest from an investigation into a group of Palestinian and Palestine solidarity activists in the Chicago area that began in January 2010. In September of that year, the FBI conducted simultaneous raids on the homes of seven community and political activists in the Chicago area, seizing their computers with search warrants that stated they were looking for hints of “material support for terrorism.” The raid led to a grand jury subpoena of twenty-three other activists, as well as a subpoena of AAAN records.

The “material support” provision in the 1996 Anti-Terrorism Act has been interpreted so broadly by the courts that it has enabled—among other ruinous attacks on US citizens of Palestinian or other Middle Eastern descent—the prosecution of people with only a semblance of proximity to a designated foreign terrorist organization.

For example, in 2003 Attorney General John Ashcroft indicted Palestinian-American professor and activist Sami Al-Arian for conspiring to aid Islamic Jihad. Despite including voluminous surveillance records, the government’s evidence was so flimsy that it couldn’t convince a jury to convict. Yet the government protracted its prosecution of Al-Arian, keeping him imprisoned or in a perpetual criminal status until this past June, when all charges were finally dismissed. Even so, he was placed in deportation proceedings.

Just two years ago, five men exhausted their attempts to appeal a 2008 conviction of material support when the Supreme Court refused to hear their case. The men, known as the Holy Land Five, had been convicted of the terrorism charge and sentenced to as much as sixty-five years in prison for providing humanitarian aid to Zakat committees that were alleged to be affiliated with Hamas. The men’s charity had been deemed criminal in spite of the fact that USAID had given money to some of the same committees, none of which were ever blacklisted.

In both of these cases, the government used Israeli expert witnesses—and in the case of the Holy Land Five, set the precedent for allowing secret evidence from an anonymous Israeli intelligence officer.

The government reportedly suspected AAAN of being a front for the Popular Front for the Liberation of Palestine, which, like Hamas, has been designated by the US government as a terrorist organization. And while the government never found any evidence of support for the PFLP when it cast its wide net over Palestinian activists, it did find Rasmea Odeh.

Odeh was not one of the initial subjects of the search, but it was through a determined investigation into her colleagues at AAAN, which garnered thousands of documents from the Israeli government, that Odeh’s forty-five-year-old record from Israel was unearthed.

This is why Odeh’s attorney, Michael Deutsch, has described the government’s case against her as the product of a “fishing expedition” and has argued that the charge should be dismissed, as an example of the “selective use of the criminal law to target protected political work.”

Odeh’s initial lawyer had urged her to accept a plea bargain, which would have seen her imprisoned for six month to one year followed by voluntary deportation. However, since Deutsch became Odeh’s lead attorney, her legal advocacy has been robust and aggressive.

Odeh will plead not guilty to the charge. And while her lawyers concede that she was indeed arrested, convicted and imprisoned for a criminal offense that she undeniably failed to disclose on her application, they have argued throughout the pre-trial motions that Odeh’s conviction was handed down by an illegitimate regime that extracted her confession through sustained and brutal torture. Therefore, they argue, the conviction should not be accepted in a US court, which abides by the standards of due process and fundamental fairness, neither of which existed in Odeh’s judicial process.

Israel’s military court system adjudicates cases involving those Palestinians who came under Israeli occupation after the June 1967 war. Operating under the authority of the military in the West Bank, it yields a guilty verdict in 99.74 percent of cases.

Most Palestinians choose to accept a kind of plea bargain, but for those who do go to trial, the prosecution relies almost entirely on signed confessions. These confessions are secured during an interrogation process that frequently includes the kind of torture Odeh endured, as has been documented over the past four decades not only by human rights organizations, including Human Rights Watch and the Public Committee Against Torture in Israel, but also by a commission convened by the Israeli government and Israel’s High Court of Justice.

Odeh’s defense here had hoped to make an expansive argument, using her case as an opportunity to scrutinize the illegitimacy of Israel’s military legal regime. However, in a crucial ruling handed down just a week before her trial was set to begin, Judge Gershwin Drain refused to allow the defense to include the significant bulk of the evidence it needs to do that—or even mount a solid defense of Odeh.

Judge Drain is keeping the parameters of what the jury will need to determine narrow: whether Odeh knowingly lied on her applications for Visa and Naturalization, and whether she would have been ineligible for naturalization had she answered differently.

Despite writing in his October 27 ruling that he finds Odeh’s claims of torture to be “credible,” Judge Drain will not allow the jury to hear the harrowing accounts of it, or even the fact that she was tortured. The defense will not be able to bring their expert witness to testify that Odeh suffers from post-traumatic stress disorder, affecting her state of mind when asked to recall the experience on the application. Nor will the defense be allowed to explain the compromised nature of the military court that convicted her.

However, the judge will allow more than 100 Israeli documents that indicate Rasmea Odeh confessed to helping coordinate the two bombings in 1969. Judge Drain ruled in favor of the government’s position that while it’s relevant that the jurors know the crimes for which she was convicted, how that conviction was obtained is irrelevant. In the judge’s written opinion, “The validity of the Defendant’s conviction is not an issue for the jury’s determination.”

Odeh’s decision to fight the charges instead of accepting a plea bargain means that, if found guilty, she will almost certainly serve a portion of the ten years in prison she faces before being stripped of her citizenship and deported. She also faces up to $250,000 in fines.

Rasmea Odeh has already spent ten years in prison as a result of one rigged trial. We must now wonder how long she will spend as a result of another.