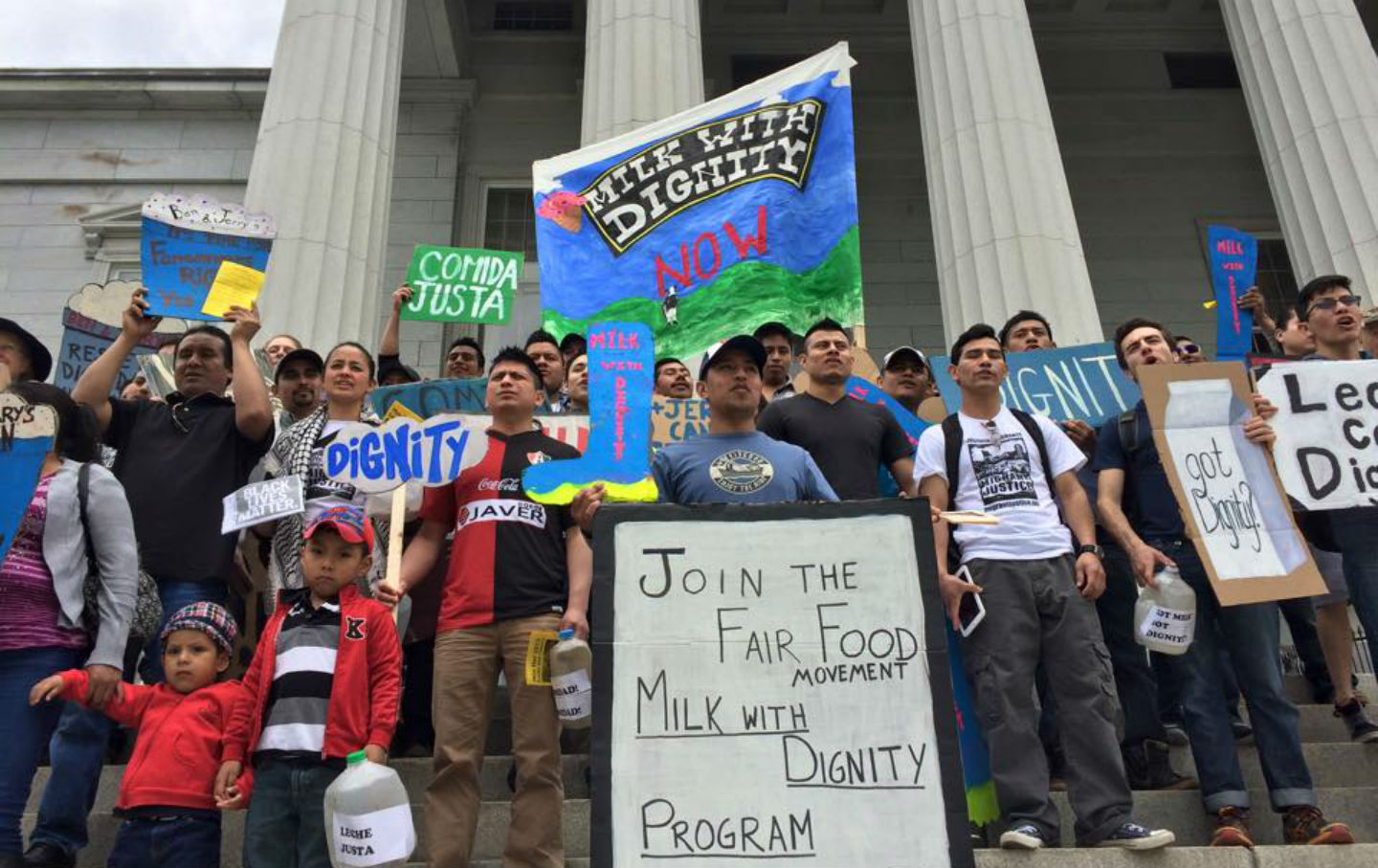 Migrant Justice members rally for dairy worker's rights on May Day as part of the Milk With Dignity campaign. (Photo courtesy of Migrant Justice.)

Amidst the factory farms and genetically modified Frankenfoods of America’s agricultural landscape, the dairy farms of Vermont’s rolling hills have always stood apart as emblems of bucolic innocence. And Ben & Jerry’s has long been the quintessential Vermont brand, built on wholesome corporate values and hippie sensibilities by the pint. But labor advocates say the ice-cream empire’s socially minded branding is greased with the sweat of an exploited workforce, rotten with poverty wages, squalid housing, and abusive bosses. So immigrant workers are barnstorming Vermont’s dairy industry to demand Milk with Dignity.

The grassroots group Migrant Justice launched the Milk with Dignity (MWD) campaign last year to push a comprehensive labor monitoring plan for the dairy labor force, which would establish standards on wages and labor conditions set by workers themselves, supported by independent auditing, worker education, and a scheme for equitable profit-sharing among workers and farmers. The system is modeled on the Fair Food program of the Coalition of Immokalee Workers, which has successfully organized across the supply chain, wholesale to retail, to raise wages and broadly improve labor conditions on Florida tomato fields. For Vermont’s 868 dairy farms, with some 1,200 to 1,500 migrant workers, MWD seeks not only higher wages but also decent housing and leave times, protection from discrimination and greater autonomy and a say in their working conditions.

According to Migrant Justice’s survey of 172 dairy workers, about 40 percent earned less than the state minimum wage of about $9. Roughly a third observed that they were treated worse than US-born workers. And with workweeks averaging about 60 to 80 hours and frequent injuries, the labor conditions were not only harsh but also hostile, with some reporting verbal abuse and being denied medical care or even a break for the bathroom or eating. But Migrant Justice, which has campaigned to protect migrants from police mistreatment and deportation, knows abuses often go unreported, since workers are intimidated by a system that offers little protection or recourse.

Worker and activist Victor Diaz recalls in a video interview how he endured harrowing workplace injuries, like getting lacerated by an exploding milk bottle, and “inhumane” housing conditions living with three coworkers in a shoddy cramped trailer: “It was not a dignified livelihood for a worker that spends 12, 13, 14 hours working everyday, to try to rest in a space like that…impossible!… And one day we decided to leave, enough was enough” Though they would lose the first paychecks that their boss had illegally withheld, they decided, “we couldn’t keep being slaves to this.”

Milk with Dignity from molly stuart on Vimeo.

To help close these gaps in basic labor standards, Migrant Justice reached out to Ben & Jerry’s last year to educate them about workers’ struggles and offer to collaborate with their “Social Mission” division to launch the reform plan, and to take the lead in cleaning up the supply chain. One of Ben & Jerry’s main suppliers is the St. Albans Cooperative, a network of 430 dairy farms in New York and Vermont, including some known for their unsavory labor practices.

It seemed like a common-sense business move: the company touts numerous ethical sourcing initiatives, including certification for growth hormone–free milk and cage-free eggs, and contributions toward environmental causes. It markets images of beaming fair-trade farmers in Uganda and grants iPads to help Mexican coffee harvesters modernize their operations. Why wouldn’t Vermont’s signature do-gooder brand want fair conditions for the workers in its own backyard?

But Ben & Jerry’s didn’t bite; workers say the talks petered out earlier this year after Migrant Justice started pressing them on making changes that would require outside scrutiny of the supply chain. They later found out that the company did incorporate their advice—selectively—in vague talking points on “social human capital.” It was part of a voluntary program the company developed independently to promote humane farming practices called Caring Dairy, which scores farmers on various sustainability indicators. With about 85 participating farms, Ben & Jerry’s plans to establish benchmarks for “good working conditions, reasonable work hours, and positive involvement in the local community,” aimed at fostering “work/life balance.”

While Migrant Justice certainly knows of many decent farm employers, they say Caring Dairy guidelines won’t be rigorous as long as farmers can view caring as merely optional. Pointing to Ben & Jerry’s past industry leadership on other corporate “values,” like animal welfare, O’Neill says that for workers, too, “that type of robust action with real accountability…is needed, and the Caring Dairy program has none of that.”

Still, Ben & Jerry’s Director of Social Mission Rob Michalak told Vermont Public Radio earlier this month that Caring Dairy schemes help ensure that “conditions are safe, people are paid well, and that they’re living in good conditions. We’re working on a lot of what Migrant Justice is working on. We think the work they are doing is important.” (The company had no further comment when contacted by The Nation.)

Just not important enough to cooperate with. O’Neill says activists are frustrated that after so many months of consulting with the company, “This [program] became their solution, not listening to workers, not sitting down and understanding more deeply the change we were seeking…. saying what you’ve done to educate farmers is fine, but what this is not is a real mechanism to ensure that there’s workers’ rights in your supply chain.”

So Migrant Justice took its campaign public to pressure Ben & Jerry’s to match its talk of corporate values with real commitment to workers’ rights. And advocates hope Vermont’s struggle for fair milk stirs a national discussion on blending labor consciousness into food policy. Milk with Dignity folds into a groundswell of food-justice activism that incorporates fair pay and labor protections into a holistic concept of social sustenance.

“We’re trying to create the standard and grow it,” O’Neill says. “In addition to the work we do that wins real rights for our members, it’s also changing the conversation about food.”

And they’re reserving a spot at the table for whenever Ben & Jerry’s is ready to talk.