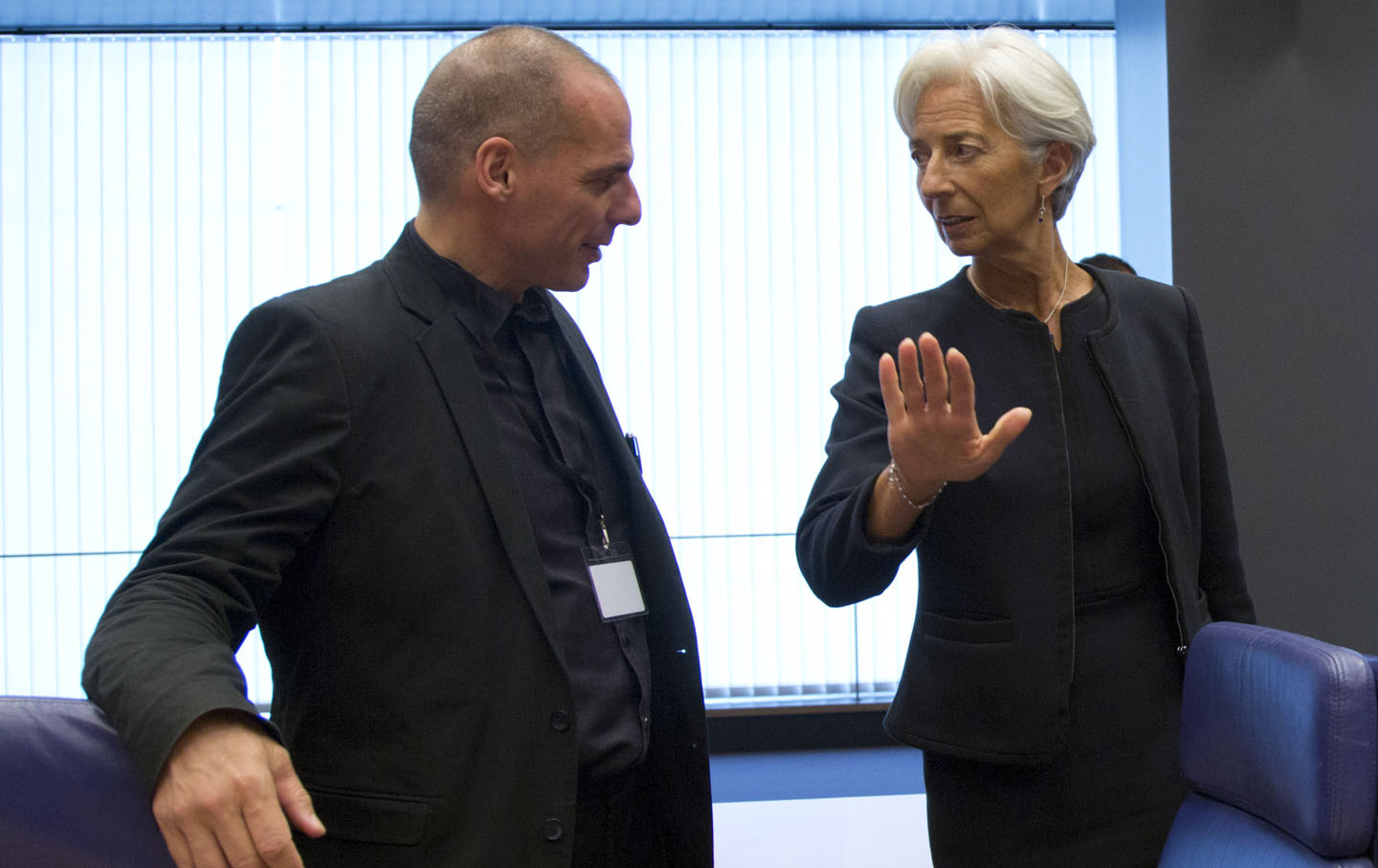 Greek Finance Minister Yanis Varoufakis speaks with Managing Director of the IMF Christine Lagarde during a meeting at the European Council in Luxembourg on June 18, 2015. (AP Photo/Virginia Mayo)

On June 30, Greece has to pay 1.6 billion euros to the IMF. Unless its creditors disburse the 7.2 billion euros they’re holding pending an agreement, it can’t. Shortly after that, Greece will officially be in default to the IMF. No one knows what comes next, and the rhetoric has become more and more vitriolic. On Monday, there will be an emergency meeting of the eurozone leaders to try to resolve the standoff. It’s unlikely that they’ll resolve anything, though I suspect they’ll come up with some interim solution to buy time.

The frenzy of media attention to Greece is intensifying the unbelievable pressure most Greeks feel they are under—and, through strategic leaks, the pressure on the Syriza government to cave. The negotiations with the country’s creditors have come to seem purely symbolic: a power struggle like the chess game at the end of The Seventh Seal. I, too, hate the endless speculation, spinning and churning. I hate the pornography of suspense, the barely concealed schadenfreude, the way the real lives at stake disappear under a fog of acronyms and numbers and misused terms. (“Reform,” for instance, doesn’t mean the same thing as cuts and tax hikes.) But since it’s my job to weigh in, here are a few thoughts about why Armageddon may not be just around the corner.

Syriza on the Brink

First, while a default to the IMF would be extremely serious, it would not necessarily mean a Greek exit from the eurozone, nor would a Greek exit from the eurozone necessarily mean ejection from the European Union. There is no roadmap or precedent for either eventuality, despite the warnings of an “uncontrollable crisis” issued in his report to Parliament last week by Yannis Stournaras, governor of the National Bank of Greece and former finance minister of the conservative New Democracy government.

Second, the Financial Times reports that around 5 billion euros left the Greek banking system last week. This is also extremely serious. But there is no panic, and no queues at cash machines, despite leaked suggestions from eurozone finance ministers that the banks might not open on Monday. Many in the Greek government read such leaks as an attempt to tighten the screws on Syriza by speeding up the bank run.

Third, while eurozone officials and most of the international media continue to blame Greece for the stalemate, much less attention has been paid to long-standing disagreements between the IMF and Greece’s European creditors. The IMF has acknowledged that the austerity program in Greece has failed, and that debt relief or restructuring is needed. Debt relief is anathema to the Europeans, who would have to sell it to their own electorates. Hence the insistence on further cuts and tax raises, which are unacceptable to the Greek government and unenforceable in Greece.

The split is exploited by the old political elites who’ve lost their hold on power and who hate Syriza with a vengeance.

Fourth, according to Reuters, an (unnamed) senior EU official has said that a default to the IMF doesn’t constitute a default to the eurozone. This may be a way of leaving the door open for further ECB assistance in case of a parting of ways with the IMF. The ECB has continued to provide a drip-feed of funds to Greek banks as the slow bleed that began when the election was called becomes a full-blown hemorrhage. Though there are more unpayable loans due in July to Greece’s European creditors, default to the IMF doesn’t necessarily mean bank collapse.

Finally, Greece’s strategic importance, which has caused so much violence and agony in the past, strengthens Tsipras’s hand. Though there are some in Europe who would now like to be rid of this troublesome country, the risks of doing so outweigh the benefits.

Having said all that, this is still a truly dangerous moment. As it becomes clear that the two halves of Syriza’s mandate—to stay in the eurozone and end austerity—are incompatible, the cleavages in Greek society open wider. The pressure to choose between the two things most Greeks want is splitting the country more or less along class lines: those who have suffered most from the crisis and who want an end to austerity above all, against those who want to stay with the euro at any price. The split is easily exploited by the old political elites who’ve lost their foothold on power, who hate Syriza with a vengeance and who (like the creditors) will stop at almost nothing to destroy it.

Two demonstrations in Athens on Wednesday and Thursday last week made that starkly obvious. Wednesday’s demonstration in support of the government—“We’re taking the negotiations into our own hands”—was called by Syriza, though many there were unhappy with its handling of the negotiations. Thursday’s protest—“We’re staying in Europe”—drew many unaffiliated people whose anxiety was hijacked by Syriza’s political opponents, including far-right members of the previous government. Several of the protest’s organizers had been consultants or candidates for New Democracy or smaller opposition parties—though in a small country like Greece with tight networks of common interest, this is not surprising. Among the smiling politicians photographed in Syntagma Square was Nikos Dendias, minster of public order in the years of tear gas and violent policing. There were uniform printed placards, some in Greek and some in dodgy English (war against the redish cliantel state) that ranged from hysterical (no to stalinism in greece) to geeky (high pensions=recessionary measure”). The protest was promoted on Twitter by the Greek representative of European Commission.

To anyone who knows Greek history, these two opposing rallies trigger frightening memories: division, hatred, civil war, repression. These are the memories Europe was supposed to consign to the distant past. But by denying Greece a viable, sustainable exit from its five-year depression, by making Greeks choose between leaving the eurozone and yet more crushing austerity, Europe’s leaders are destroying what’s left of the fractured middle ground—and feeding demons they may not be able to contain.