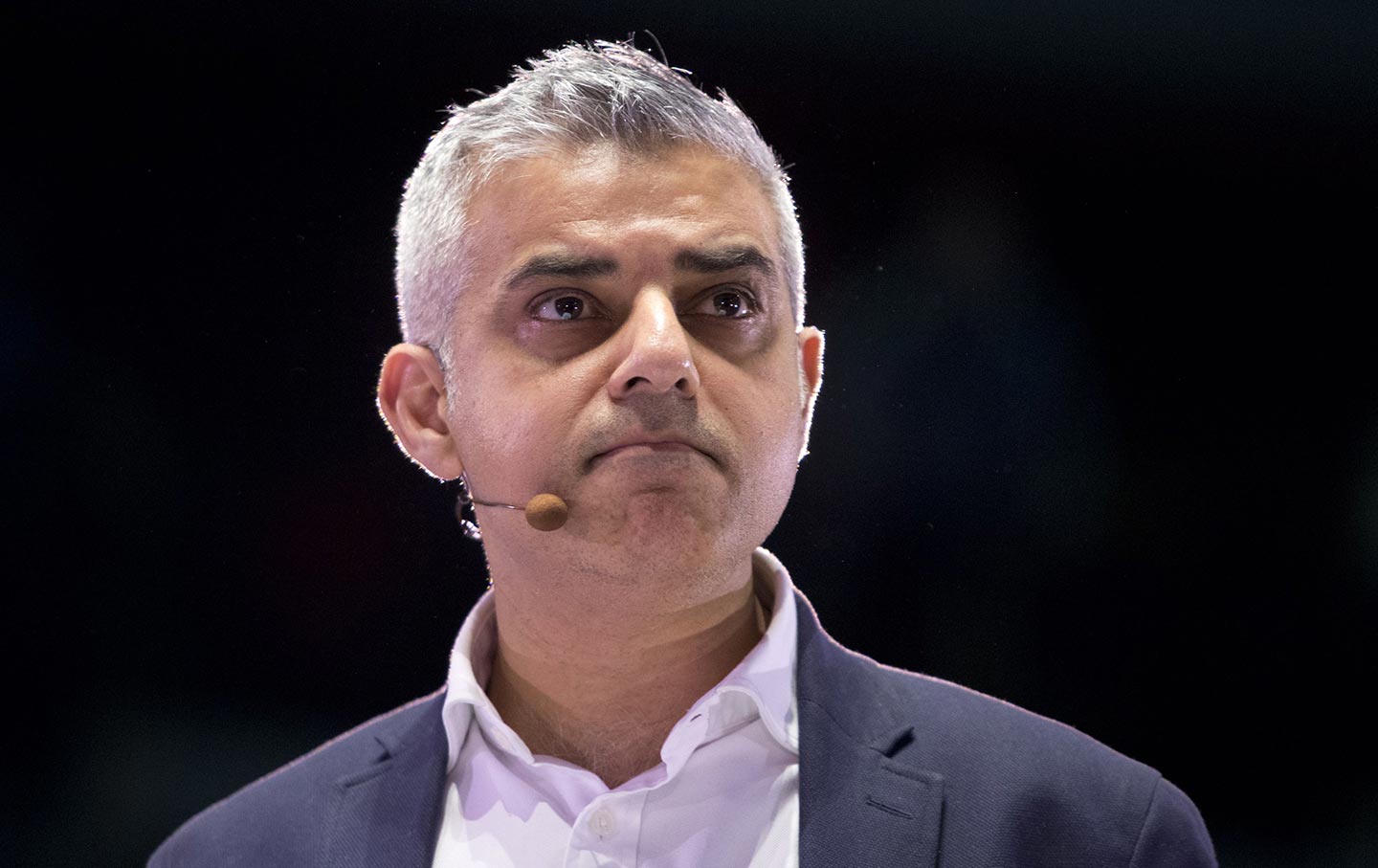 London—How high can a dead cat bounce? On Thursday, Britain may find out. Though voters also go to the polls that day to elect a new Scottish Parliament, assemblies in Wales and Northern Ireland, and local councils all across England, the biggest prize is here in London, where the race to succeed outgoing mayor Boris Johnson has become as ugly as any Republican primary.

Like Johnson and Prime Minister David Cameron, the Conservative candidate, Zac Goldsmith, attended Eton—though unlike them, he was expelled when pot was found in his room, and never bothered to get a university degree. The son of billionaire tycoon Sir James Goldsmith, and reportedly one of the wealthiest members of Parliament, until recently Zac Goldsmith was known mainly as the editor of the Ecologist magazine and as a campaigner on environmental issues.

His opponent is Sadiq Khan, the son of a bus driver and a seamstress who both immigrated to England from Pakistan shortly before he was born. A human rights lawyer until his election to Parliament in 2005, Khan specialized in cases involving violence or discrimination by the police. While Khan was one of 35 MPs who nominated Jeremy Corbyn for the party leadership, he didn’t actually vote for Corbyn. Indeed, his own politics are far more centrist (as a whip in Gordon Brown’s government, it was Khan’s thankless job to try to persuade the incorrigibly rebellious Corbyn to back the party leadership—with scant success).

Although on paper the race looked close—when Goldsmith first ran for Parliament in 2010 he increased the Tory share of the vote in his constituency by 10 percent, adding another 8.5 percent last year—Goldsmith’s mayoral campaign struggled for traction, hamstrung partly by a candidate who, unlike the mediatropic Johnson, seemed more inclined to avoid the press than to court attention. Mainly, though, Goldsmith’s faltering fortunes were symptomatic of a Conservative party at war with itself over Europe: While Cameron and his Chancellor of the Exchequer, George Osborne, have staked their political future on Britain voting to remain in Europe on June 23, both Goldsmith and Johnson are firmly in the “Leave” camp.

After weeks of watching Khan steadily widen his lead in the polls, the Tories resorted to the “dead cat” strategy

But after weeks of watching helplessly as Khan steadily widened his lead in the polls, the Tory high command decided to resort to what Sir Lynton Crosby, the Australian political operative who managed both of Johnson’s mayoral victories—and then ran the Tory campaign in 2015—famously described as his “dead cat” strategy: “There is one thing that is absolutely certain about throwing a dead cat on the dining room table—and I don’t mean that people will be outraged, alarmed, disgusted. That is true, but irrelevant. The key point…is that everyone will shout, ‘Jeez, mate, there’s a dead cat on the table!’; in other words they will be talking about the dead cat, the thing you want them to talk about, and they will not be talking about the issue that has been causing you so much grief.”

On April 21—two weeks before the election, with the Tory civil war dominating the headlines and Khan ahead by 20 points—Guido Fawkes, an influential Tory blog written by Paul Staines, dug up an old Facebook post by Labour MP Naz Shah that suggested relocating Israelis to the United States as a solution to the Israel-Palestine conflict. Staines followed up with a post in which Shah, captioning a Tea Party meme showing a mug shot of Martin Luther King Jr. over a quote from his “Letter From Birmingham Jail”—“Never forget that everything Hitler did in Germany was legal”—commented: “#APARTHEID ISRAEL.”

Shah, who had been appointed Parliamentary Private Secretary to John McDonnell, the shadow Chancellor of the Exchequer, resigned from that post by the end of the day. Although her statement noted that “I made these posts at the height of the Gaza conflict in 2014, when emotions were running high around the Middle East conflict,” she went on to say, “But that is no excuse for the offence I have given, for which I unreservedly apologise.” The following day Shah was suspended from the Labour Party.

And there, just possibly, matters might have ended. It’s true that even before he became leader, some of Corbyn’s opponents tried to use his long record of support for the Palestinian cause to smear him as an anti-Semite. Those attacks failed because even Corbyn’s harshest critics couldn’t deny his manifest decency.

The initial ruckus might have ended—but then, on BBC radio, former Mayor Ken Livingstone equated Zionism with Nazism.

But then Ken Livingstone, a close Corbyn ally who served two terms as London mayor before losing to Johnson in 2008, went on BBC radio to defend Shah—by equating Zionism with Nazism: “When Hitler won his election in 1932, his policy then was that Jews should be moved to Israel. He was supporting Zionism—this before he went mad and ended up killing six million Jews.” A little while later the TV cameras caught John Mann, Labour chair of the All Party Parliamentary Group Against Antisemitism (and, possibly not coincidentally, a bitter foe of Corbyn), as he shouted at Livingstone that he was a “disgusting racist” and a “Nazi apologist.” To which Livingstone blandly replied, “Check your history.” Soon Livingstone, too, had been suspended following complaints from MPs—including Sadiq Khan. By Monday, the Daily Telegraph claimed Labour had secretly suspended 50 members for anti-Semitic or racist comments.

The first thing to say about the furor—which shows no sign of abating—is that those who dismiss the whole thing as a Tory plot, aided and abetted by (in Livingstone’s phrase) “embittered old Blairite MPs to try and get rid of Jeremy Corbyn,” are precisely half right. Corbyn’s opponents inside and outside of the Labour Party have seized on this incident as a chance to discredit his leadership. Yet if Corbyn has acted deliberately, he has still shown far more decisiveness than Cameron ever did when, back in 2009, it was revealed that his allies in the European Parliament’s right-wing Conservative and Reformist group included actual Nazi apologists.

What Livingstone and his defenders fail to acknowledge is that you can’t pursue a “dead cat” strategy without a cat. Anti-Semitism in Britain dates back to the Middle Ages, a delusion whose persistence, as Shakespeare’s Shylock reminds us, requires neither the presence of actual Jews (expelled from Britain in 1290 by Edward 1 and not readmitted until Cromwell’s time) nor any other basis in contemporary social conflict.

Yet it should also be clear that disagreements over Israel and the Middle East have inflamed and provided new pretexts for British anti-Semites, whether out of still-lingering resentment over the Jewish revolt against British rule during the Palestine Mandate or out of revulsion with Israel’s actions in Gaza and the West Bank.

Anti-Zionism is not the same as anti-Semitism—despite the many anti-Semites who are also anti-Zionists.

But anti-Zionism is not the same as anti-Semitism—despite the many anti-Semites who are also anti-Zionists, and the many Zionists who claim otherwise. Nor will the line between them, however clear or fuzzy, necessarily look the same in New York as it will in a city with over a million Muslims—and less than 160,000 Jews. This is complicated territory, made more complicated by the fact that British Jews tend to be more conservative politically than their American counterparts—Margaret Thatcher was elected to Parliament from East Finchley, one of the most Jewish areas in the country—and also more likely to identify with Israel.

Which doesn’t mean we can’t draw some simple—if tentative—conclusions from the events of the past week:

So Thursday’s vote here matters for all kinds of reasons. Not just as a test between social democracy and capitalist austerity. Or between a party that, however feebly, has been on the side of immigrants—most recently in the form of an amendment by Alf Dubs, a Labour peer who was himself a Jewish Kindertransport refugee from Hitler’s Germany, to take in 3,000 unaccompanied children from Syria—and a party that showed no compunction in abandoning those children to their fate. (Khan voted in favor of the amendment. Goldsmith didn’t even show up for the vote.)

Thursday’s vote matters because it has become a question of common decency. Last weekend, The Mail on Sunday published an article by Goldsmith accusing Khan of extremism, calling Labour “a party that thinks terrorists is [sic] its friends.” For illustration, the paper ran a photo of the double-decker bus destroyed by suicide bombers on July 7, 2005! David Cameron, who has been on his high horse all week berating Labour for insensitivity, had nothing to say. But to Sayeeda Warsi, the woman Cameron appointed chair of the Conservative Party in 2010, the stakes couldn’t be clearer. Likewise Peter Oborne, a columnist for the Daily Mail, who wrote that Goldsmith has “concentrated his campaign on an undignified personal attack on his Labour rival Sadiq Khan, with a series of smears connected with his Muslim religion. This kind of politics is not just ugly, it is cynical, divisive and sectarian.”

Sadiq Khan is, as he often says, a proud Muslim. He also voted in favor of same-sex marriage (receiving death threats as a result), fought to save his local pub in Tooting—and successfully managed the campaign of the first Jew to lead the Labour Party. A week before that cat landed on the table, Anshel Pfeffer, Haaretz’s man in London, wrote: “barely a day passes without photographs of Khan, wearing a snug kippa, appearing at some synagogue, or in a Jewish community center, or meeting with the chief rabbi.” Khan even attended a model seder.

If Londoners reject a moderate like Sadiq Khan for being too close to Islamist radicals, what will that say about a capital that prides itself on being a world city? Or as Hillel, whose teaching Jews around the world remember every Passover, put it, “If not now, when?”