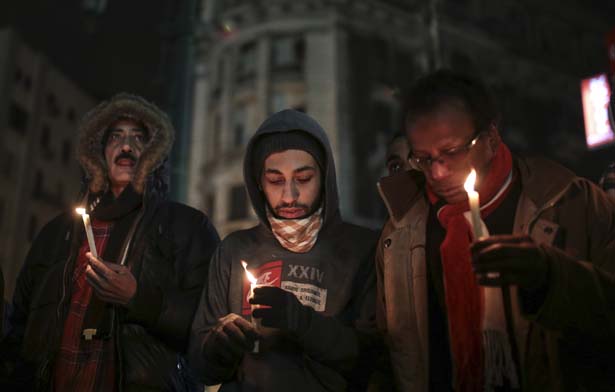 Egyptians hold candles in Cairo in solidarity with the victims of the attack on Charlie Hebdo. (AP Photo/Mosa'ab Elshamy).

Two men in balaclavas burst into Charlie Hebdo’s office in Paris and opened fire on the editorial staff, killing five cartoonists, a columnist, a maintenance worker, an economist, a visitor, a copy-editor and two police officers.

None of these stories will do, at least not for me. I find myself reading them in different guises in the national press, hoping they will enlighten or satisfy me, but something is always missing.

Begin with the clash of civilizations. The morning after the attack, Ayaan Hirsi Ali wrote in the pages of The Wall Street Journal that the killings were not the work of “mentally deranged, lone-wolf gunmen” but were instead inspired by a political ideology that can be traced back centuries, to the Koran itself. Yet this tragedy does not reflect a world neatly divided between Muslims and non-Muslims. The victims included not just cartoonists like Charb and Cabu, whose work mocked Islam and orthodoxies of all kinds, but also a copy-editor, Mustapha Ourrad, and a police officer, Ahmed Merabet, who had ancestral roots in Muslim North Africa. As for the terrorists, they were born and bred in France and, although they claimed to avenge the prophet, they did not hesitate to kill men who could have been their own brothers, their flesh and blood. When I think of that morning in Paris, I don’t doubt where my allegiance is. It is with victims, no matter whether they are believers or nonbelievers. It is with writers and artists, no matter whether I like their work or dislike it.

In Europe and America, so the story goes, political correctness has taken hold everywhere and to such an extent that people no longer dare to criticize Islam. In that sea of conformity, we are told, Charlie Hebdo stood out as an equal-opportunity offender. It ran covers that mocked Jesus, Moses, Muhammad, the Pope, François Hollande, Nicolas Sarkozy and Marine Le Pen. At its best, Charlie Hebdo afflicted radicals and defended free speech. In 2006, after an editor at the daily France Soir was fired for reprinting the twelve Muhammad cartoons that had led to violent protests around the world, Charlie Hebdo republished them. On the cover was one of Cabu’s best cartoons: it showed the prophet crying, with his hands covering his face. The caption: C’est dur d’être aimé par des cons… (“It’s tough to be loved by morons…”). This was their best-selling issue, with 400,000 copies sold compared with their usual run of around 70,000 copies.

But it seems to me that Charlie Hebdo did not offend with equal frequency. Over the last fifteen years, Islam became a primary target for the satirical magazine, out of all proportion with the number of Muslims in France or their political weight in the country. And it wasn’t hard to pick out the Muslims in their cartoons—the men were bearded and turbaned, the women veiled and submissive. Charlie Hebdo’s editors deemed any criticism of these portrayals to be a bow to political correctness and an attack on their right to criticize religion. Freedom of speech became synonymous, in their work, with the right to offend, but not with the right to call out bigotry. I would invite those who insist that the magazine was always and exclusively satirizing ideas to consider the geographic origins of turbans and veils, as well as France’s history in North Africa. I remember one cover from last fall, which depicted the Nigerian schoolgirls who were abducted by Boko Haram as pregnant welfare queens, demanding that no one touch their payments. Mocking victims of kidnapping and rape and having them voice right-wing fears about welfare payments to descendants of immigrants is not an image I find amusing or instructive.

Almost immediately after the terrorist attack, the usual claims were made that Muslims are silent about radicalism. At home in Santa Monica, I watched my social media timelines fill with calls on Muslims to denounce the tragedy, even as Muslims did exactly that. Dalil Boubakeur, the head of the French Council of the Muslim Faith, condemned the attack as “barbaric.” Tariq Ramadan, the influential professor of Islamic studies, declared, “It is not the Prophet who was avenged, it is our religion, our values and Islamic principles that have been betrayed.” Al-Azhar University, the Organization of the Islamic Conference and the Arab League all condemned the attack, as did the Council on American-Islamic Relations, the Muslim Public Affairs Council, the Islamic Society of North America and thousands upon thousands of ordinary people online. But I doubt this will suffice. In a few weeks or a few months, we will once again hear some pundit or other demand that Muslims speak out against radicals, a standard that is not applied to any other community when one of its members perpetrates a violent act.

The story is that France has failed to integrate approximately 5 million Muslims who call the country home. Under the ideals of the French republic, citizens are to be treated equally under the law, with no regard for race or religion. For this reason, the government does not keep statistics on citizens of Muslim descent. But academic studies have repeatedly shown that French Muslims are twice as likely to be unemployed than non-Muslims. They graduate from high school at lower rates and are imprisoned at higher rates. Many of them live in densely populated housing projects, with little access to the kinds of opportunities other French citizens receive. While it is hard to overstate the level of disenfranchisement among French Muslims, this cannot explain what happened either. That morning in France, millions of Muslims went about their own business, regardless of any political grievance or private injustice.

Something else separated the two perpetrators of the Charlie Hebdo attack from the rest of their community. Said and Cherif Kouachi, both of them in their early 30s, were born in Paris and orphaned at a young age. A decade ago, the younger of the two brothers was a rapper trying to make a name for himself through his music. When that failed, Cherif Kouachi turned to drugs and petty crime. Eventually, he met a radical preacher who encouraged him to go fight in Iraq, but he was arrested in 2005, before he could carry out his plan. Those who put the blame for the Charlie Hebdo attack on France’s involvement in Muslim countries should remember that France did not support the American invasion of Iraq in 2003 and did not send troops there. Charlie Hebdo ran cartoons that criticized the war, including one that portrayed UN inspectors studiously searching for weapons of mass destruction, while behind them missiles labeled “USA” were poised to strike. Whatever anger the brothers felt about the invasion of Iraq, it makes no sense to direct that rage at the magazine.

Well, then, what about the double standards? This is a refrain we hear all the time with satirical weeklies like Charlie Hebdo. And not without cause. Under French law, the magazine could run cartoons mocking Islam, but it could not run cartoons mocking the Holocaust. In fact, in 2009, Charlie Hebdo fired Maurice Sinet (known as Siné), one of its most famous cartoonists, because of a column in which he suggested that Nicolas Sarkozy’s son would “go a long way in life” after marrying a Jewish heiress. But murdering cartoonists will not put a stop to double standards. Instead of tolerating less speech, we must ask for more speech. And here is where we must work for greater diversity in newsrooms: the more voices we have, the more complex our understanding of one another will be. The best response to offense is not murder. It is life. It is resilience. It is art.

I don’t know which of the stories around Charlie Hebdo is true. None of them, or perhaps all of them. I am tired. Tired that the drawing of a cartoon of Muhammad attracts more anger than the spilling of blood. Tired that casual bigotry is being equated with serious criticism. Tired that providing context is seen as providing excuse. I’m also afraid for the right of writers and artists. Afraid for all the innocents who will suffer. Afraid of the restrictive legislation that is sure to follow.