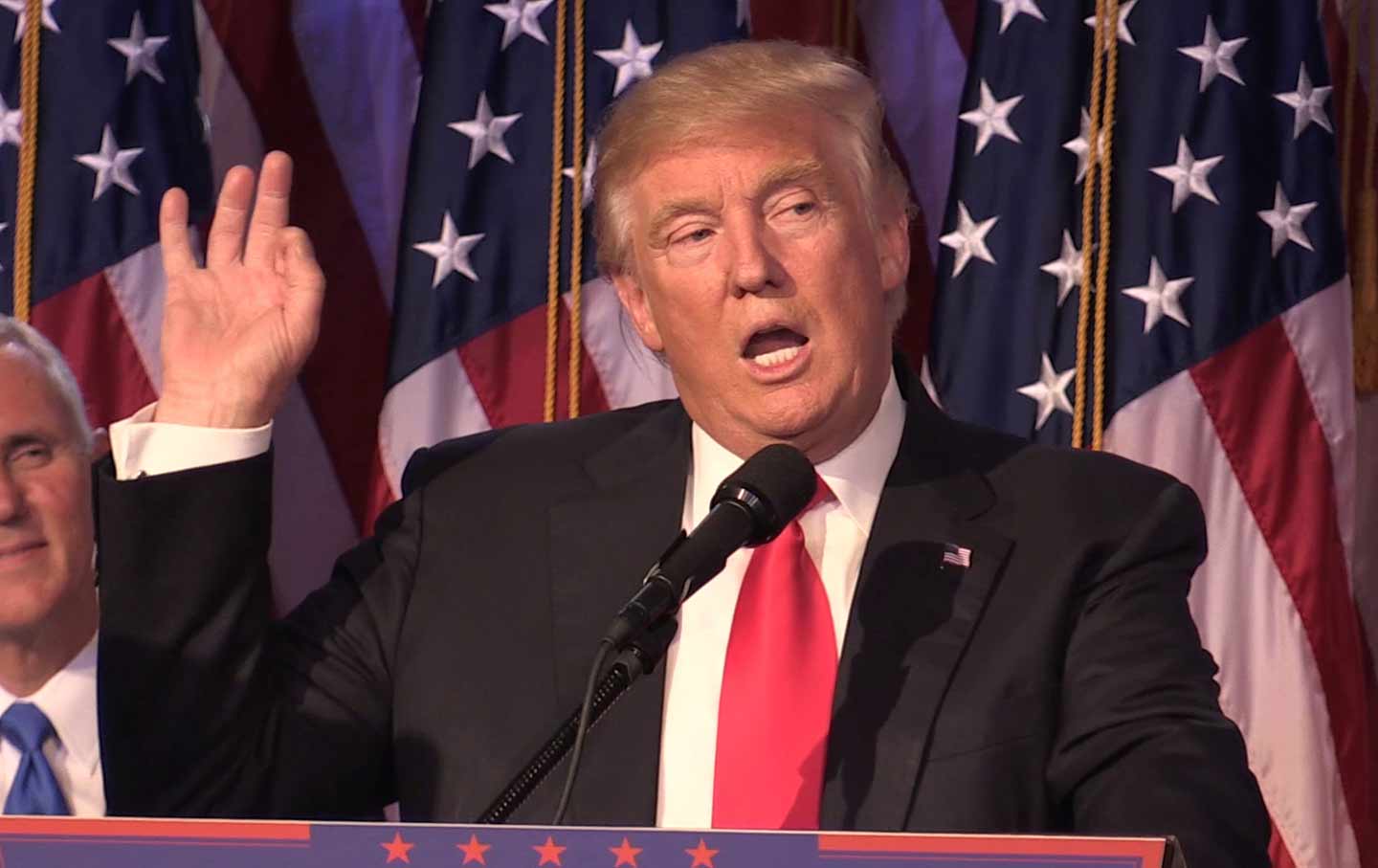 Donald Trump as he makes his acceptance speech in New York following his victory to become the 45th president of the United States. (Paco Anselmi/PA Wire)

“Sorry to keep you waiting. Complicated business. Complicated. Thank you very much.” —Donald Trump’s opening remarks in his victory speech

Complicated? Americans just elected to the presidency a candidate whom the vast majority don’t like and consider dishonest, lacking the temperament and the experience to lead the country. They chose him even as broad majorities oppose his signature policies from building a wall to mass deportations to tax cuts for the rich and corporations. Complicated doesn’t begin to describe it. Here are some commonsense reflections on this political tsunami.

Trump won with the endorsement of one major newspaper; his party establishment disavowed him, and many of its billionaires sat out the race; his campaign was out-spent and out-organized; his tax dodges were exposed; and a video documented his predatory sexist boasts reinforced by testimonies of several of his victims.

He won solely because of the choice: He promised change to a country desperate for it. Hillary Clinton personified the establishment, and campaigned on continuity. Trump trumpeted his independence and promised to clean out the swamp. Clinton was indelibly marked by the corruptions of our politics. Trump, the billionaire buffoon, presented himself as the quintessential outsider. Clinton, unable or unwilling to put forth a compelling vision of fundamental change, wrapped herself in Obama. For the 39 percent of voters who considered change the most important quality of a candidate, Trump led 83-14 percent in the CNN exit polling.

The Center Did Not Hold

This was a class act. Clinton fared better among college graduates than Obama in 2012 and far worse among high-school grads or less. The populist temper of the times, reflected in the Sanders surge in the Democratic primaries and Trump’s victory, is a revolt against political elites—“Washington,” “Wall Street”—that have failed most Americans.

This isn’t about gridlock. It is about the policies that have been supported by both parties—global trade and tax deals of, by, and for the corporations, financialization and Wall Street bailouts, big-money politics and crony capitalism, decades of promises not kept.

In the “blue firewall” state of Michigan, half of all voters thought trade cost jobs. They voted Trump 57-36. One third thought it created jobs; they voted Clinton over two to one. The same was true in Ohio and Pennsylvania. This isn’t simply about what Republicans obstructed. It is about what elites in both parties have done or accepted that corrupted our politics and rigged our economy.

Race, America’s great divide, still matters. Van Jones called the vote a “whitelash.” Trump’s right-wing populism mobilized the people not just against corrupted elites but against corrupted elites who favored “those people.” The modern-media master mobilized all the symbols—the wall, Mexican rapists, law and order, guns and more. He ran a blatantly racist, sexist, misogynist, nativist campaign. Most Americans hated the campaign and disliked the man. Seventy-one percent didn’t approve of his treatment of women. The poisoned chalice of populism has always been right-wing variants that play on anger against minorities or outsiders or women. Clinton played foil to the confidence man, talking about removing barriers, with constituency-specific agendas, rather than focusing on a populist economic message that would lift all.

Trump and the evangelical conservatives who rallied to Trump’s transparently secular banner are likely to misinterpret this election. Americans did not vote to build the wall, deport millions, put gays back in the closet or women back in the kitchen. They do not support stripping African Americans of the right to vote or women of the right to choose. The majorities that twice elected Barack Hussein Obama have not disappeared.

This morning, many will awake rightfully terrified about the country they are in. Progressives must reach out to stand with people of color, women, immigrant communities, Muslims. We are headed into four years of fierce battles over reactionary policies and choices on immigration, on Supreme Court justices, on voting rights and more. But the answer to Trump’s whitelash isn’t to retreat on social liberalism; it is to double down on a real economics that speaks to working and poor people.

What happened to Obama’s majority coalition? Turnout wasn’t really the problem. Whites, 72 percent of the vote in 2012, were 70 percent in 2016. Blacks ticked down a point from 13 percent of voters to 12 percent; Hispanics ticked up from 10 to 11 percent. Young people 18–29 remained 19 percent of voters. Single women remained 23 percent.

These are still remarkable margins among what will continue to be a rising majority share of the electorate. But 2016 should be a caution to Democrats. The Obama coalition works only if Democrats don’t throw white working people out of the boat. Obama won majorities of those who were not college graduates; Clinton did not.

Republicans held the Senate, losing only one seat, and the House, losing only seven seats. They gained three more governorships, and now lead 33 to 14. Even as divided as they were in this election, at war with themselves, they are the majority party in the country, despite a reform majority still ready to be forged.

Obama’s coalition will continue to grow in number. But Democrats better learn how to sing from Bernie Sanders’s gospel to have any hope of becoming a majority party again.