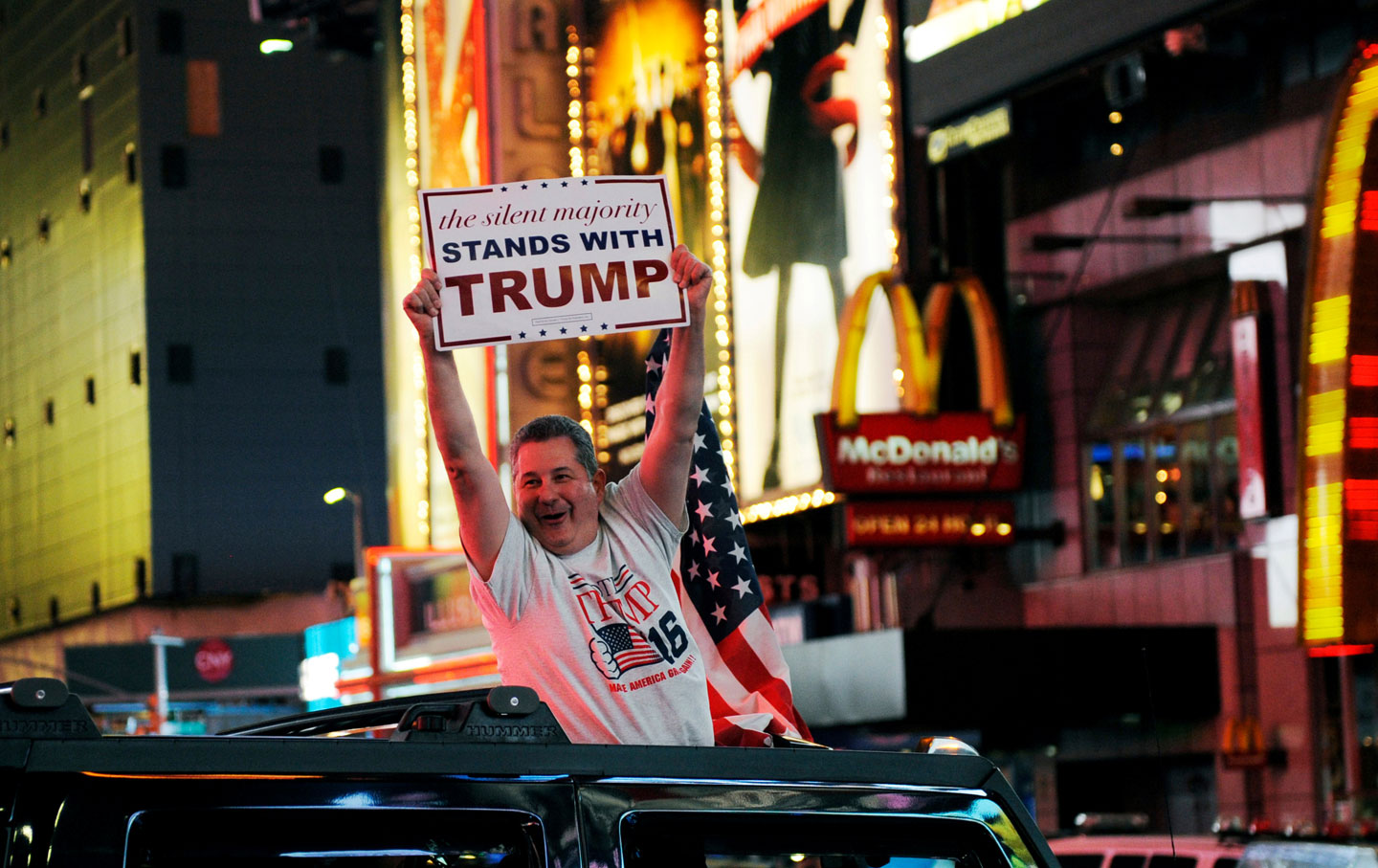 A person leans out of a vehicle shouting, in New York City on election night, November 9, 2016. (Reuters / Mark Kauzlarich)

Raleigh, North Carolina—After Mitt Romney lost in 2012, conservatives began writing about “missing white voters”—millions of whites, by some accounts non–college graduates, by others evangelical Christians, who sat out the race because of the GOP nominee’s moderation (and perhaps his Mormonism). Senator Ted Cruz explicitly built his campaign around them, and to the extent that he had a campaign strategy, so did Donald Trump. It looks as if Trump and Cruz turned out to be right.1

A white backlash against Hillary Clinton and Barack Obama, and the racial and gender power shift they represented, has upended everything that progressives believe about the country. At this moment, it feels like everything we know about politics is wrong. With almost no ground game, trailing in every poll at the national level and in the crucial swing states, Trump won beyond anyone’s advance projections except his own. I’d call his projections delusional, except he turned out to be right. (The effect of FBI Director James Comey’s unconscionable intervention into the election 11 days out cannot be measured.)2

As a person of the left, it is my responsibility to look at the Trump phenomenon and acknowledge the economic and political revolt it represented. Trump voters believe politics is broken, and the economy is rigged. So did Sanders voters—and so did many Clinton voters, including this one. But Republicans voted for a man with no ideas about how to fix it, except to scapegoat immigrants and Muslims and blacks who live in ghetto hellscapes where they’re either victims or perpetrators of violence. He knows nothing about the potential power of the diversity that now distinguishes this country, which will now be treated like a curse and not a blessing.3

At a Trump rally here in Raleigh on Monday, he made farcical promises to “bring back coal” and “bring back miners, factory workers, and steelworkers.” He reprised his promise to “build the wall” and make Mexico pay for it, and to keep Clinton from flooding the country with Muslim terrorists disguised as Syrian refugees. “Fuck ISIS!” a middle-class, middle-aged father screamed at the top of his lungs, as his teenage son and daughter smiled approvingly. “The years of betrayal will end when we take office, very soon, very soon,” he promised.4

Here is the scary truth: This is the election in which a vocal minority of white people began to see themselves as a minority, and to act as a self-conscious minority group, with interests that are separate from those of other ethnicities. White Republicans have voted that way before, but with more subtlety. Trump traded the party’s dog whistles for a bullhorn. The white nationalists who emerged to cheer him on were just a fraction of his support, but the worldview they articulate resonated with many Trump voters, even if they weren’t quite ready to articulate it.5

Nationwide, it seems as though black turnout was down, but just a little; Latino turnout was way up, as was turnout by Asian American voters; they all went overwhelmingly for Clinton, but they were swamped by an unexpected turnout by rural and “exurban” whites. Here in North Carolina, though, a large part of the Democrats’ defeat was the effort Republicans put into voter suppression. Even though the NAACP won its suit against the draconian restrictions the legislature imposed on voting in 2013, just after the gutting of the Voting Rights Act, the state made a sham of complying with the federal appeals court. Seven lost days of early voting were restored, but state and local election officials were left to their own devices to make decisions about where to put polling places and how many to have.6

In a memo, the head of the state Republican Party, Dallas Woodhouse, urged voters “to call your Republican election board members and remind them that as partisan Republican appointees they have duty to consider Republican points of view and that we support them as they ensure our elections are secure.” The majority Republican state and local boards of election did exactly that, eliminating 158 first-week early-voting polling places in the 40 counties that had been covered by the VRA. “They stayed within the letter, not the spirit” of the court’s ruling, says NAACP president Rev. William Barber II, and he has no doubt they dampened black turnout.7

This is not the outcome I expected. At Clinton’s midnight election-eve rally here in Raleigh, I had the unusual opportunity to be part of a diverse, ecstatic crowd of dancing, chanting Democrats while Trump talked in my ear, as I waited, with microphone and earpiece, to go on MSNBC. I was occupying two worlds, one of inclusion and optimism, and one in which Trump snarled to a crowd of admirers and into my earpiece, “We don’t need Lady Gaga!” (who had just come out to play the Clinton rally) and, “The first thing we should do, let’s get rid of Hillary.” Caught between two worlds, I knew only one could win on Tuesday, and I expected it to be the one that lost.8

The world represented by the Obama-Clinton coalition is still the country we are becoming; a Trump victory can only postpone it. But it hurts; to know we’re a nation where you can brag about grabbing a woman by her pussy, where you can mock a disabled reporter and deride a Gold Star family, where you can stiff your workers and lie about your wealth and never show your taxes, where you can trash many ethnic groups and retweet white supremacists, and still become president. In fact, we’ve now learned that it’s easier for a racist, sexist, chiseling, cheating demagogue to become president than it is for a woman. That hurt. It also hurts to remember that the media put more time into talking about Clinton’s e-mail mistakes than about any other issue with Trump; books will be written about the media’s cultivation of Donald Trump over the next decade.9

I keep trying to end this on an optimistic note. The country will survive, probably. But it could fundamentally change. With control of all three branches of government, the GOP is able to promote an agenda that, in its particulars, Americans tell pollsters they reject: austerity, tax cuts for the rich, abortion and gay marriage either condemned or illegal, college unaffordable, Social Security and Medicare slashed. It will ignore, even suppress, the just claims of the Black Lives Matter movement; the cruelty of mass incarceration and the killings of young black people will continue. We had a chance to stop this, and we weren’t able to. Our country, and its institutions, aren’t as healthy as the optimists among us think.10