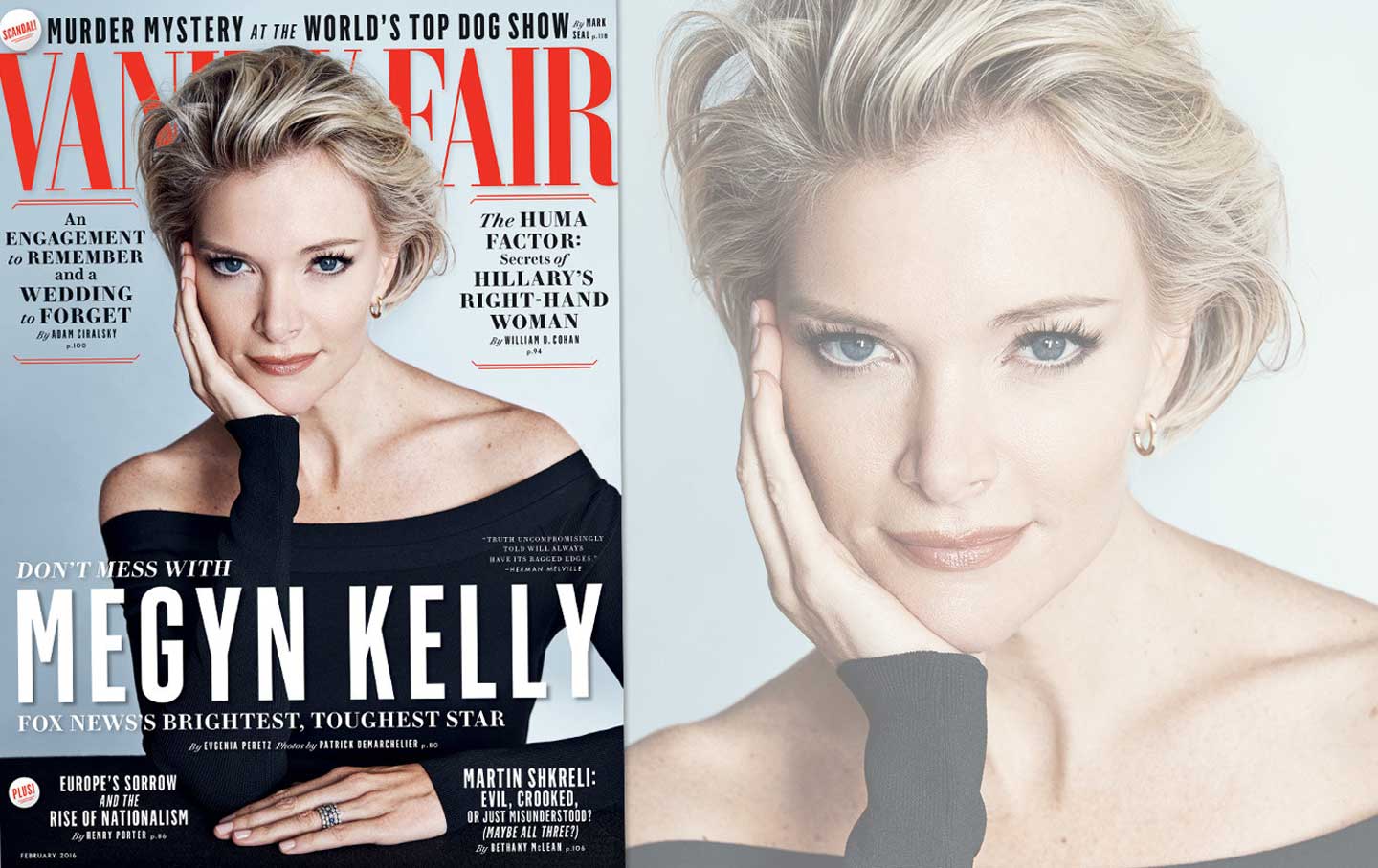 A few paragraphs into Vanity Fair’s recent cover story on Fox News host Megyn Kelly, comedian Bill Maher says something about her that is both true and significant (albeit also obscene and ungrammatical): “We think of Megyn Kelly as the sane one over there at Fox News. It’s just because she’s surrounded by Hannity and Bill O’Reilly. She’s like the blonde dragon girl on Game of Thrones. Everyone else is a zombie or a dwarf or [having sexual intercourse with] their sister, so she looks normal.” Aside from this quote, virtually all of the nearly 5,000 words in Evgenia Peretz’s profile—to say nothing of the clip of the Patrick Demarchelier/Jessica Diehl photo shoot, captured for posterity on the magazine’s website—reveal the truth of Maher’s observation. Had the magazine intended this, it might have demonstrated a kind of Dadaesque genius, as if the article had been produced by Man Ray or Luis Buñuel. Unfortunately, I’m pretty sure it is supposed to be serious.

Vanity Fair, as its millions of readers are well aware, is often a great magazine. A throwback to the heyday of Ed Sullivan and Johnny Carson, it offers something for everyone. Longtime editor Graydon Carter spares no expense whether in pursuit of tough-minded investigative reporting, high-minded cultural criticism, popular history, or gorgeous photography, all packaged beneath a fluffy, usually slightly risqué celebrity profile. A problem arises, however, when the latter category gets mixed up with the others. VF is by no means the worst offender on this front. An entire subset of the media now defines “news” in terms of how many Kardashians can be roped into a given story. But because VF is the industry leader, it becomes an important marker for a certain sort of corruption against which we all should be on our guard.

The thrust of the piece—and, to be fair, much of what has been written about Kelly—is that she is a brave truth-teller, a feminist hero and a bit of a liberal despite the right-wing environment in which she toils. This, as Maher implies, is complete nonsense. That any of these descriptions are even imaginable is a tribute to Rupert Murdoch, Roger Ailes, and the rest of the far-right media/entertainment complex. They have moved America’s ideological goalposts so far rightward that a person can earn undeserved praise merely for not being the worst of the worst.

Take, for instance, Kelly’s credentials as a feminist. Peretz credits her with becoming “a newly minted role model for women” as well as “a feminist icon of sorts—the sort who won’t actually call herself a feminist.” For evidence, she includes not only Kelly’s famous (failed) takedown of Donald Trump during the first GOP debate last summer, and some arguments she’s had with the likes of Bill O’Reilly, among others, about how to talk to women, but also the curious credential that Kelly “has talked about her breasts on the Howard Stern show and posed for racy shoots in men’s magazines.” What she did not include, however, is Kelly’s own view of feminism, which she has said “connotes a harshness and almost a shrillness” that she finds “unattractive.” She demonstrates this distaste on the air quite frequently, like the time she defended Carly Fiorina’s slanderous lies about Planned Parenthood, for starters, and when she failed to challenge Judge Andrew Napolitano after he ridiculously claimed that “Contraceptive services means contraception, euthanasia, and abortion.”

As for Kelly’s credentials as a liberal, Peretz explains that praise from the likes of “liberals such as Chris Matthews, Joy Behar, and Gayle King” has earned her this special respect. That Peretz and her editors were willing to publish such a sentence is yet another victory for Roger Ailes and his ilk, since none of those people are known to be especially influential (or even liberal) and, anyway, they were not praising her liberalism. More to the point, I could fill a good part of this magazine with comments Kelly has made that are not only illiberal but quite stupidly and maliciously so. What, for instance, can it mean to say, after President Obama has called the Benghazi attack “an act of terror,” that “Declaring something an act of terror does not necessarily mean you are declaring it a terror attack”?

As Jim Rutenberg explained in yet another go-easy-on-her profile in The New York Times Magazine, Kelly happily offers up “red-meat stories and allegations driven by the boiling anger of the Tea Party era: that Barack Obama was pursuing a ‘socialist-like agenda,’ that the community-organizing group Acorn would rely on the likes of ‘child rapists’ to help conduct the U.S. Census, that the Department of Justice was refusing to enforce laws against voter intimidation, at least when those doing the intimidating were black and their victims were white.” Somehow, neither VF, the Times Magazine, nor Time, which named Kelly as one of the 100 most influential Americans of 2014, saw fit to mention her nonsensical racist haranguing about a phony “New Black Panther” conspiracy to keep nice, upstanding white folk from voting. Kelly is quite proud of the fact that she devoted 45 segments to this non-story over the course of two weeks. She even bragged on-air about how Fox News “dragged the media kicking and screaming” to it. To be fair, though, these obsessive race-baiting fantasies tend to look positively Murrow-like when compared to her nutty crusade to prove that Santa Claus is white.

When you actually bother to examine Kelly’s record, it’s hard to avoid the fact that she’s really just a nicer looking Roger Ailes in a Valentino blouse. But I doubt that the profile writers in her fan club are whitewashing her awful record simply because she’s so pretty. The truth is, she’s incredibly good at what she does, and what she does best is distract attention from the malicious misinformation Fox News peddles on a daily basis—in part by calling out the right-wing lies that are so outrageous even Fox executives cannot bring themselves to defend them. Sadly, for her fan base in the mainstream media, that’s more than enough.