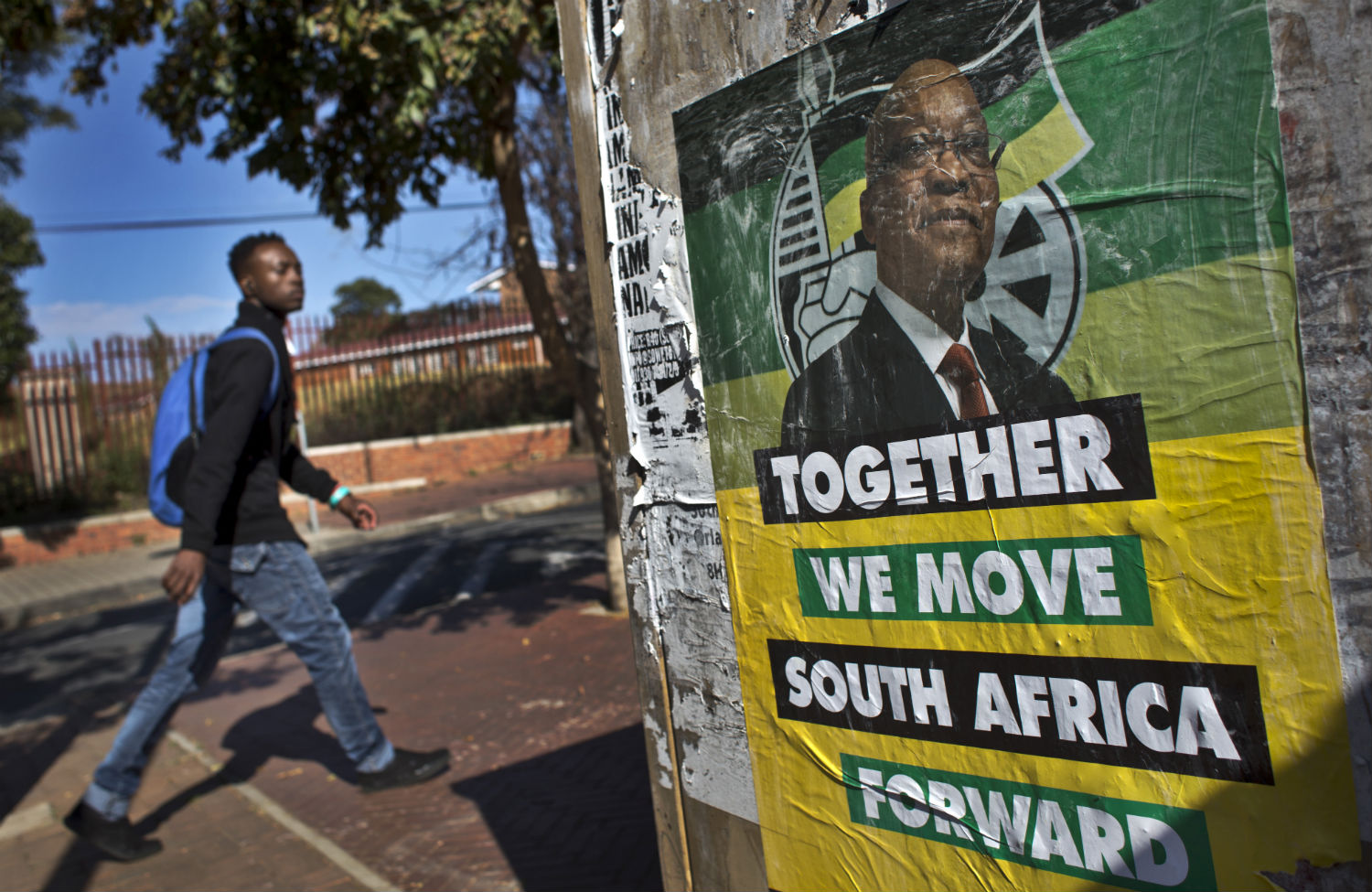 A month before South Africa’s May 7 elections, the country’s fifth national election since the end of apartheid, Ronnie Kasrils, a longtime leader in the ruling liberation party, the African National Congress, launched “Sidikwe! Vukani! We Are Fed Up! ” (also referred to as Sidikwe! Vukani! Vote No!). The campaign called on South Africans to vote tactically—either vote for a minority party or spoil their ballots. Whomever South Africans voted for, the campaign argued, it shouldn’t be the ANC.

That a senior member of the party would call on South Africans to vote for any party but the ANC within months of Nelson Mandela’s death shocked some outside observers. But from within South Africa, Kasril’s cry was not unexpected. The ANC has governed the country since 1994, and twenty years into democracy, is the target of widespread discontent. President Jacob Zuma, elected in 2009, keeps the country’s journalists busy with tales of corruption, incompetence and outright criminality. He has been linked to billions in bribes used in a 1999 national arms deal (which is still being investigated), and in 2005 he was charged with raping a family friend (he was found not guilty). In the latest scandal, Zuma spent millions in government funds to upgrade his personal residence.

Zuma’s alleged corruption is just one of the ANC’s woes. In August 2012, South African police killed dozens of miners after they went on strike to demand roughly $1,200 in monthly wages. Today, in the longest strike in South Africa’s history, 70,000 miners continue to strike to demand higher wages. Labor relations in most sectors are worsening, particularly as businesses seek to undermine unions by working with agencies that provide casual labor. Up to 40 percent of South Africans are unemployed, and protests are a common occurrence as citizens demand more economic opportunities and better access to basic services like roads, transport, water, electricity and healthcare. Post-apartheid South Africa is one of the most economically unequal countries in the world.

To Kasrils, today’s ANC is not the ANC he fought for. “This ANC is diametrically opposed to the ANC that was able to have the capacity and the moral high ground to maximize the unity of the people from the divergent backgrounds we come from, “ he said in an interview with the Sunday Independent. “In many respects the ANC still trades on its struggle credentials and the victory it helped bring about in 1994. Could this ANC, Zuma’s ANC, have brought down apartheid?”

Despite receiving support from other ANC stalwarts like Archbishop Desmond Tutu, Sidikwe! was attacked by leading ANC members. Writing in The Star on election day, Public Service Minister Lindiwe Sisulu called Kasrils’s and his campaign “amateurish,” “ignorant” and “juvenile,” claiming, “[Kasrils] has chosen the path of cheap populism and criminality as his way of getting back at the ANC for denying him access to the fat-cat perquisites he so fondly longs for.” (Her comments do not seem to indicate that she understands that it is this “fat cat” lifestyle that many voters, Kasrils included, condemn).

While Facebook discussions, Twitter forums and blogs were aflutter with talk of “tactical voting,”only about 250,000 South Africans spoiled their vote and the ANC won by a landslide, garnering just over 62 percent. It seems baffling that a party and leader so widely criticized—by the media, by workers, even by its leaders—should win with such a landslide. But it’s also easy to see why South Africans would keep voting for the ANC. Prominent South African HIV/AIDS activist Zackie Achmat noted in an interview that despite serious accusations of corruption and mismanagement, the party has vastly expanded the country’s social safety net, offering housing and social grants that provide a monthly stipend to poor families. Moreover, despite legitimate and persistent criticisms of compromises the ANC made with the apartheid regime and corporations in order to keep the country economically afloat and politically stable during the transition to democracy, these deals steered the country away from all-out civil war. “Most people who vote ANC, vote for decent homes, economic justice, water and what the ANC calls a better life for all,” says Achamt. “Most peoples’ lives are better off than under apartheid.”

The ANC’s victory is also indicative of the opposition parties’ failure. The Democratic Alliance (DA), the country’s major opposition party, continues to be associated with white rule, having stemmed from a merger between the Democratic Party and the New National Party (the post-1994 incarnation of the party of apartheid). In this election, according to the DA, 92.8 percent of white South African voters voted for the party, compared to 6 percent of blacks. The Economic Freedom Fighters, a political movement started ten months ago and led by Julius Malema, the former head of the ANC Youth League, captured the hearts and minds of young, black South Africans, particularly men. Malema is a charismatic and gifted orator with a firm grasp of the politics of spectacle: the EFF’s platform consisted of nationalization of the mines, redistribution of land, large increases in social grants and eradication of unemployment. But despite running on a self-described radical “Marxist-Leninist Fanonian platform,” Malema’s own history of alleged corruption and lavish spending led many to question his commitment to social justice.

The election results, however, are not the outright victory Zuma wanted them to be. Of more than 31 million eligible voters, under 60 percent showed up to the polls. This means that just over 36 percent of eligible voters supported the ANC. The ANC won in eight of nine provinces, but in four of those its support dropped by several percentage points. While the EFF didn’t sweep the elections as Malema had promised, it did win enough votes in two provinces, Limpopo and North West, to be the official opposition party. It also garnered twenty-five of 400 seats in Parliament. Given that the EFF formed only ten months ago, this is a sign of the party’s pull. The DA won just over 22 percent of the vote, up from nearly 17 percent in 2009.

“The campaign put tactical voting squarely on the table, which led to much reflection and discussion,” noted Sidikwe!’s Louise Colvin in a press release issued after the election results were released. “Given our history and the deep-seated loyalty South Africans have for the proud liberation movement, we believe these elections mark a turning point where voters are prepared to shift from voting for a party to voting to strengthen the opposition.”

Sekoetlane Phamodi, a young voter in Johannesburg who didn’t want to say which party got his vote, says this election was a chance for him to cast a ballot for what he believed in. “My vote wasn’t a vote against the DA or the ANC or any other party, for that matter. It was a vote for something,” he says. “I voted with my eyes open.”

The ANC can expect a bigger battle in 2019. Observers expect South Africa’s largest union, the National Union of Metalworkers of South Africa, to form a Workers Party. Historically supportive of the ANC, NUMSA broke away from the party before this month’s elections, with NUMSA’s general secretary, Irvin Jim, saying the union would not campaign for the ANC or any other party. “It is clear that the working class cannot any longer see the ANC or the [South African Communist Party, an ANC ally] as its class allies in any meaningful sense,” said Jim.

Historically a key channel for anti-apartheid activism, NUMSA claims 338,000 members, and would likely be the most legitimate challenger to the ruling party. Respected South African political commentator Steven Friedman called NUMSA’s break from the ANC “significant.” “For the first time, a major…union–the country’s biggest—has broken with the ANC alliance and is talking openly about an alternative. This could reshape electoral politics.” As Friedman explained, NUMSA would need just 10 percent of the vote for the ANC to lose its majority. “There is a chance that NUMSA will be the catalyst for ending the ANC’s electoral dominance by 2019,” he writes.

Ayanda Kota of the Unemployed People’s Movement, a grassroots social movement critical of the ANC, eagerly awaits more parties coming onto the ballot. “We are sure that once there is a credible electoral alternative to the ANC it will win the support of grassroots groups.”